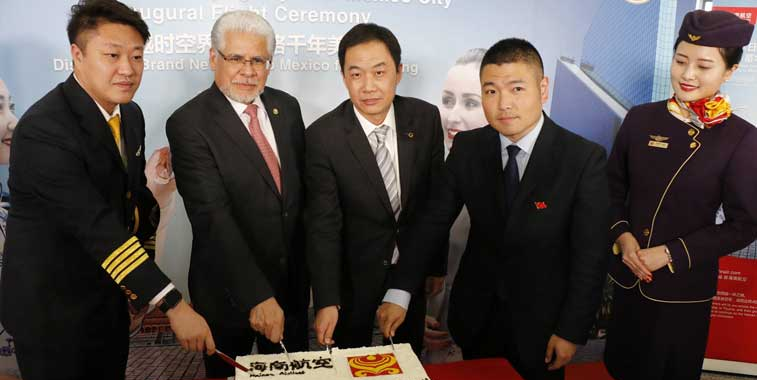 In March this year, Hainan Airlines started a three times weekly 787-8 service from Beijing to Tijuana, with the service continuing onto Mexico City. With this route contributing to the airport’s traffic figures for the majority of 2018, it will help Tijuana to get close, if not pass, the eight million passenger milestone this year.

Tijuana was Mexico’s fifth busiest airport in 2017, behind the country’s major hub in Mexico City, as well as Cancún, Guadalajara and Monterrey. Delivering a robust annual traffic increase of 12%, Tijuana was ahead of the average growth curve experienced across all Mexican airports last year, which grew by 8.5% from around 126 million to 137 million. Despite its lofty position in the passenger market, it was only the eighth largest airport in terms of cargo throughput in 2017, growing by 6.4% against a Mexican average of 11%, according to Mexican Department of Communication and Transport data for last year.

The airport is currently served by seven airlines (based on OAG schedules for w/c 17 May), a result which has increased by two since the same week in 2017. There has also been growth in the number of non-stop destinations served from Tijuana up to 34, comprising of 30 domestic and four international routes, which has risen from 32 in the same week last year (31 domestic and one international). Surprisingly, there are  currently no services to the US from Tijuana, however this could be down to its close proximity to San Diego which would result in cheaper domestic airfares for US passengers.

Tijuana has observed six years of consistent growth since 2011, after a handful of tumultuous years when the airport’s traffic stuttered through the 2008-2011 period. The Mexican market suffered only one year of traffic decline during these 10 years, between 2008 and 2009 when it fell by 14%, the same result as at Tijuana. However in 2011, when the overall market managed to grow by 3.5% year-on-year, traffic at Tijuana still fell by 4.1%. In contrast, there have been years (2010, 2013, 2016 and 2017) when the airport has delivered more growth than the Mexican average. 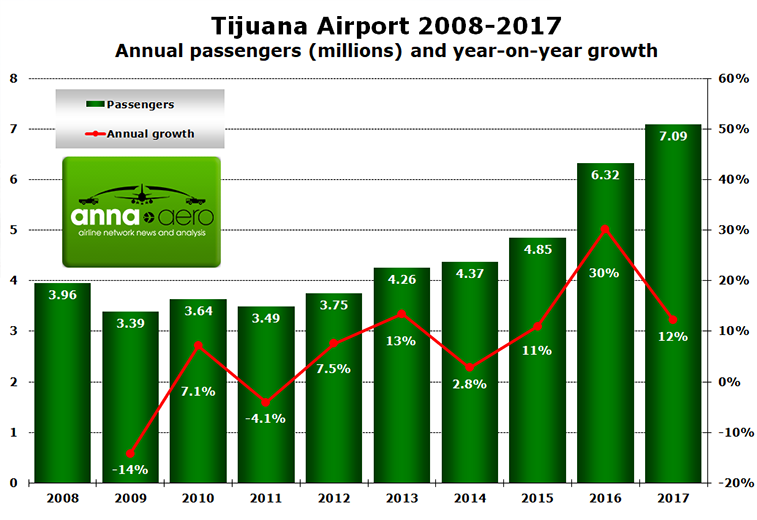 The airport has already processed 1.84 million passengers in the first three months of 2018, up from 1.63 million in 2017, a 13% increase. If Tijuana continues to grow at this pace for the remainder of this year, our data elves forecast it should get close to handling eight million passengers in 2018.

When using anna.aero’s SVID calculator, Tijuana delivers a score of 1.30, which means it gains an “Excellent” rating. Comparing this seasonal performance against those of its nearest domestic rivals – Mexico’s fourth largest airport Monterrey and sixth largest San Jose del Cabo – Tijuana performs better than both. While Monterrey also scores an “Excellent” result, San Jose del Cabo has the most seasonal traffic profile (scoring 3.01) of the three airports. Evidently, Tijuana has slightly more year-round appeal than Monterrey, as the latter’s monthly passenger figures yield it a very healthy score of 1.61, but just not as good as the former.

Source: Mexican Department of Communication and Transport. Click to enlarge.

When looking at the 2015 and 2016 seasonality scores of Tijuana’s monthly throughput, the airport has made some progress in flattening the profile of its traffic. In 2015, the airport only achieved a “Good” rating with a score of 2.97, and then improved on this in 2016 to deliver a result of 1.82, a tally it further improved upon in 2017. Looking forward to this year’s SVID score for Tijuana, the anna.aero data elves are predicting a further flattening of its score in the “Excellent” category, with an anticipated result of around 1.20.

The headline news for an airport with less than 10 serving carriers is the fact that Hainan Airlines and Volaris Costa Rica have joined Tijuana’s airline roll call, adding flights to Beijing as well as San Jose (Costa Rica), San Salvador (El Salvador) Guatemala City and Managua respectively. The Mexican airport’s biggest carrier is Volaris, with Tjiuana being the LCC’s third largest operation, behind only Guadalajara and Mexico City. The airline has increased its weekly one-way seats at the airport by 8.4% since the same week in May last year. 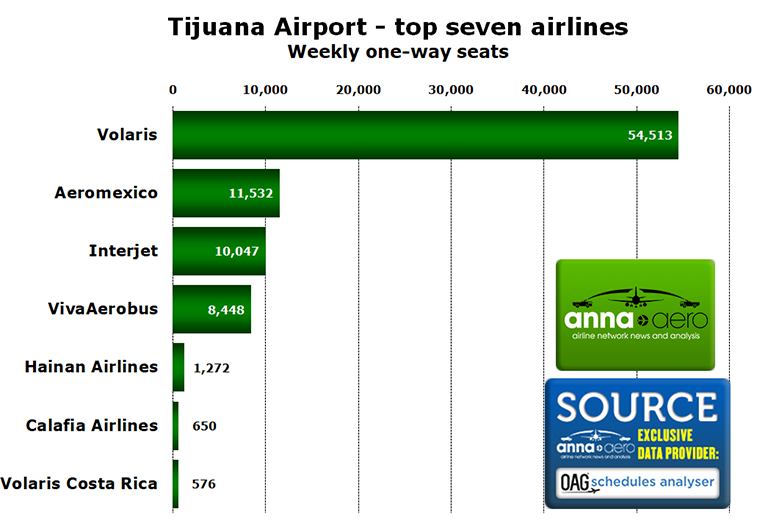 The fastest growing carrier at Tijuana over the past 12 months has been VivaAerobus, which has increased its presence at the airport by 69%. Mexican regional carrier Calafia Airlines, which offers direct flights to La Paz (daily), Loreto (four times weekly) and San Jose del Cabo (twice-weekly) also posted a double-digit capacity expansion of 18%, albeit from a smaller base. National carrier Aeromexico was the only serving airline to witness its capacity decline year-on-year, producing a marginal 0.2% drop.

Capital connection is king, but has capacity clipped

All of Tijuana’s top dozen routes are domestic sectors. This year, these city pairs combined command just under 83% of the total capacity available at the airport, down marginally from a year ago when the tally was 82.9%. The total weekly one-way seats have increased by 13% since the same week in 2017, up from around 77,000 to just over 87,000. By contrast, the #1 route to the Mexican capital, which is flown by six of the airports seven serving carriers (Volaris Costa Rica does not offer the sector), is down marginally year-on-year, falling by 2.8%. 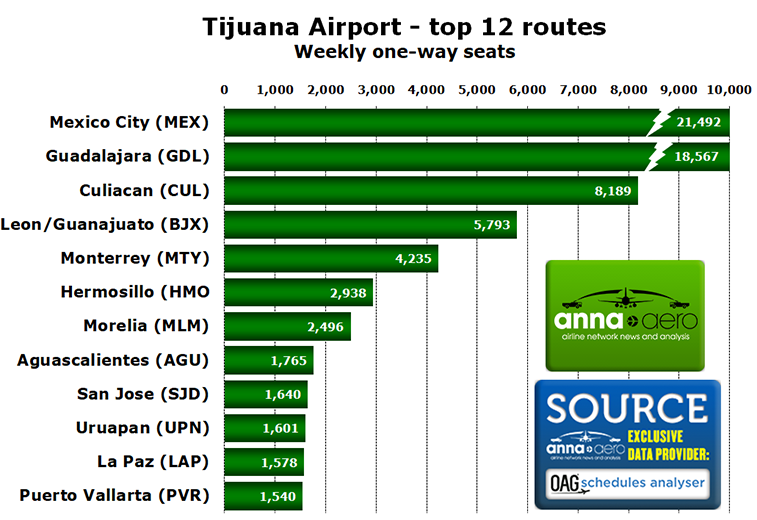 The fastest growing route in Tijuana’s top 12 was Leon/Guanajuato which observed a 56% spike in weekly capacity over the last 12 months, just ahead of San Jose del Cabo (48%) and Monterrey (45%). Four routes have experienced an annual seat cull, lead by Aguascalientes (-10%) and Uruapan (-7.4%). New to the airport’s top 12 is San Jose del Cabo, having jumped to ninth spot from 13th in May 2017. Dropping from Tijuana’s most-important routes is Shanghai, as Aeromexico’s Chinese operation has been overtaken by other faster-growing destinations.

When consulting anna.aero’s New Route Database, at this point in time there appears to be no new routes planned to or from Tijuana. The airport will seemingly be relying on growth on existing city pairs in order to drive its passenger traffic growth for the remainder of 2018 and beyond. 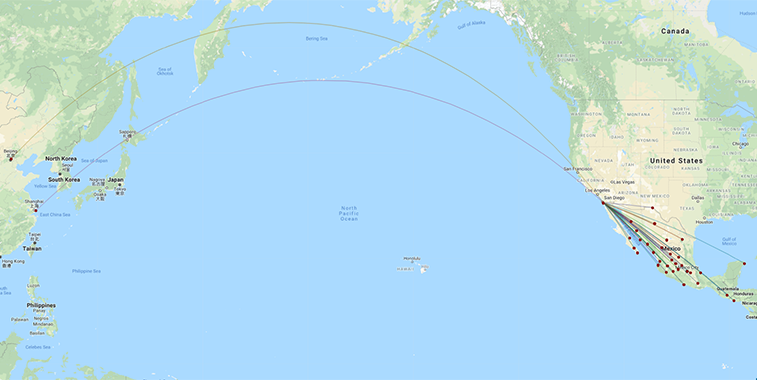 Over the past 12 months, Tijuana Airport has experienced growth in its non-stop destinations from 32 up to 34, comprising of 30 domestic and four international routes. For an airport handling just over seven million passengers in 2017 it manages to sustain not one but two Chinese services, to Beijing and Shanghai, operated by Hainan Airlines and Aeromexico respectively – if anyone knows how or why, please let us know!