Wizz Air to expand by 18% at its biggest base this year; Budapest link #1; Slovakia growing fast 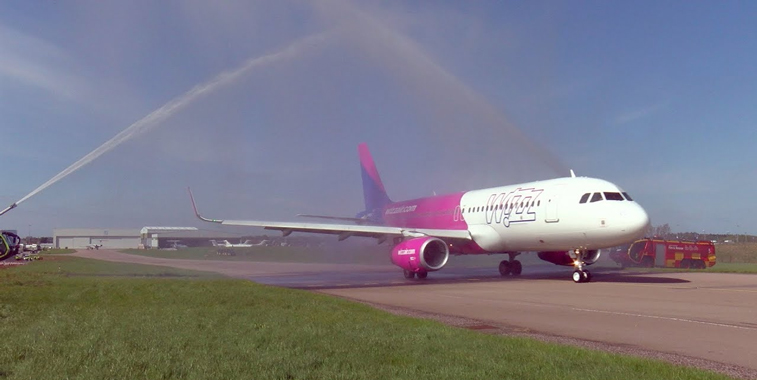 Having secured its UK AOC earlier this month, the first Wizz Air UK flight took place on 3 May between London Luton and Bucharest, with the London airport sending off the first service with this water arch salute. The airline is planning to increase its London Luton-based fleet from three to eight units by end of this month, with the ULCC expecting to increase its capacity at its largest base by nearly 18% this year. New routes to Larnaca (20 May) and Tallinn (17 September) will drive part of that seat growth.

While Wizz Air’s home base is Budapest, its biggest operation has been for over 10 years at London Luton. It should be noted at this point that the airport formally became a base in June last year, having only been an inbound destination until that time. This summer (w/c 18 May), the airline will offer 44 destinations (less than the 56 available from its Hungarian gateway) from its largest airport, up from 37 in S17. The ULCC has actually added 10 new destinations over the past 12 months, with links to Tel Aviv, Larnaca, Athens, Bratislava, Reykjavik/Keflavik, Bari, Kutaisi, Tirana, Pristina and Lviv started. Lost from the London airport’s network for the LCC since last May are the three routes to Tuzla (operated for S17 only), Brno and Szczecin (both were terminated in January 2018).

The growth trajectory of Wizz Air at Luton has not experienced any blips over the past 10 years, expanding from less than one million one-way seats in 2009 to around three million in 2017. Only in three years did the ULCC not increase its seats at the UK airport by a double-digit figure, with 2012 (8.9%), 2013 (1.4%) and 2017 (7.1%) being the less-than-average-growth years. Comparing this week’s schedule at Luton with the same seven days in 2017, Wizz Air has increased its capacity count by 17%, closing in on the 70,000 weekly seats barrier. 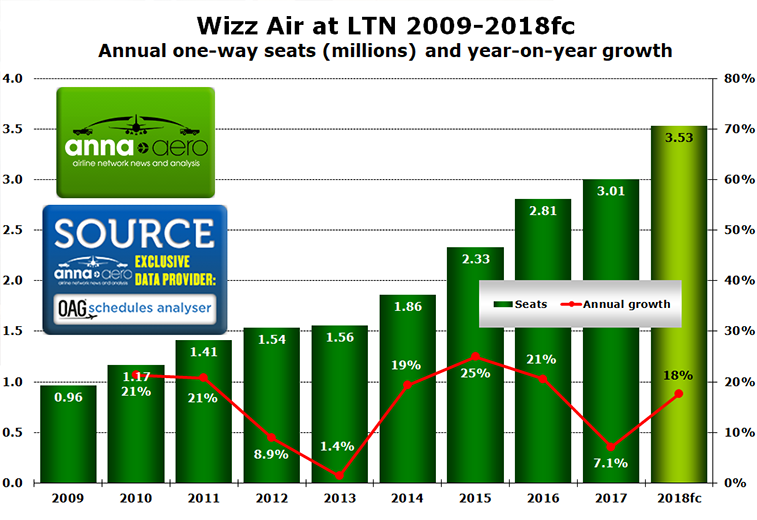 The forecast for 2018 (highlighted in light green) indicates that the ULCC shows no sign of slowing down its expansion, although of course seats can still be removed, or indeed added, over the remaining seven months of the year. Wizz Air’s importance to Luton in terms of its share of the airport’s total capacity has also grown during the period analysed, having started with just 17% in 2009. Although its stake seemed to have stalled in the low 30% range between 2014 and 2017, the carrier will command 38% of the UK capital city airport’s annual seats this year, it highest share in the 10 years that have been analysed.

Wizz Air’s home base is leading route, but not growing

Wizz Air’s top 12 routes at Luton have gone largely unchanged since last May, with ninth-ranked Poznan in 2017 falling from the listing, being the only major alteration. The ULCC’s capacity on its largest route to Budapest – effectively linking the airline’s two biggest hubs – has declined by 9.4% year-on-year, being one of just two routes showing a drop in their respective weekly seats. The other airport pair to see a decline in seats is Cluj-Napoca (-5.3%). While two routes experience static capacity – Sofia and Riga – the remaining eight airports will observe more seats this May when compared with the same week last year. These are lead by Wroclaw (+29%), Gdansk (13%) and Debrecen (+13%). Perhaps this seat growth to Hungary’s second-largest city has contributed to the capacity cull to Budapest, as the airline adjusts its network. 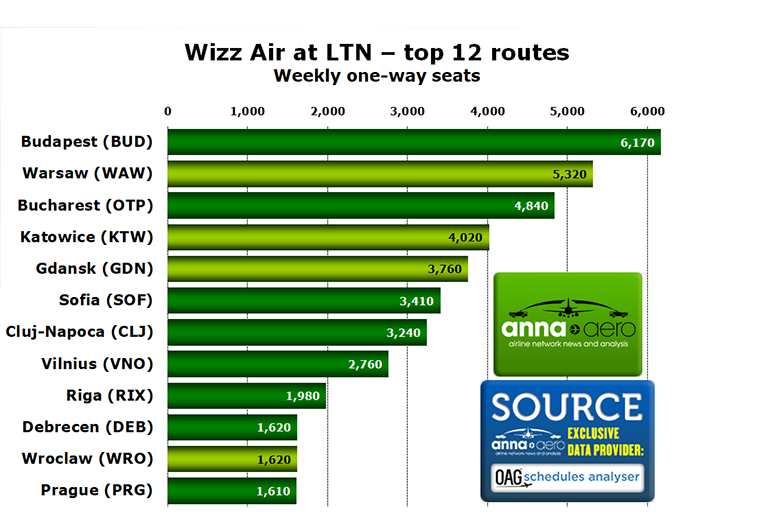 The importance of the Polish market for Wizz Air from Luton is clearly illustrated in the graph above, with four of the top 12 destinations (highlighted in light green) being in the East European nation. Other Polish cities served from the UK airport which are outside of the top dozen routes are Poznan, Lublin and Olsztyn-Mazury. Wizz Air’s top 12 routes at Luton in S18 combine to control 58% of the airline’s capacity at the airport, down from 65% in the same week last year, a result of the multiple new services that have been added during the past 12 months.

Wizz Air presently flies to 20 different country markets from its most-important base, with Greece, Israel, Cyprus, Iceland, Italy, Albania and Georgia being additions over the past 12 months, while flights to Bosnia and Herzegovina have been lost. It should be noted that the launch of flights to Italy and Iceland mark the first in Wizz Air’s network to connect Western European nations. Unsurprisingly, connections to Poland are the most vital for Wizz Air from its Luton gateway (commanding a 29% share of its total seats), with seats between the two countries growing by a marginal 1.3% since last May. The airline flies to seven airports in Poland, with weekly frequencies peaking on the Luton-Warsaw Chopin sector (24), with the lowest number of weekly flights (three) being flown to Olsztyn-Mazury. 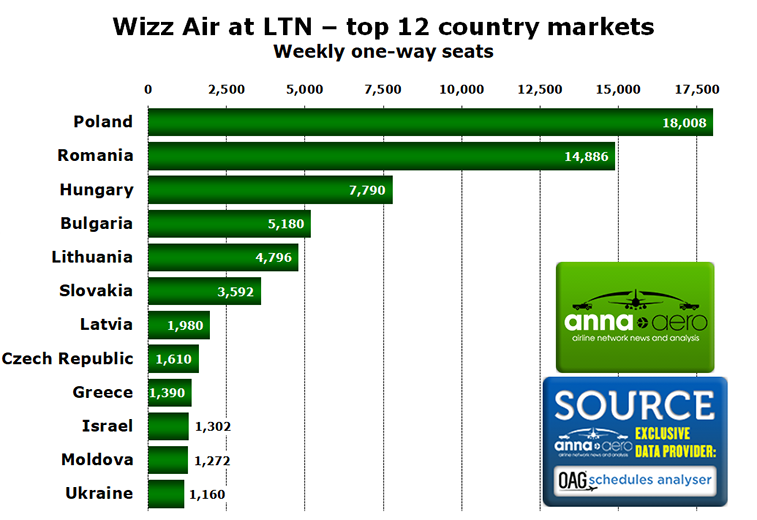 Estonia to be added to Luton links

Looking ahead to any route launches from the airline at Luton for the rest of 2018, and consulting anna.aero’s New Route Database, Estonia will become the ULCC’s 21st country market in September when it commences a four times weekly service to Tallinn. If Wizz Air has any further plans to enhance its operation at its main gateway, anna.aero will bring you the route news first. 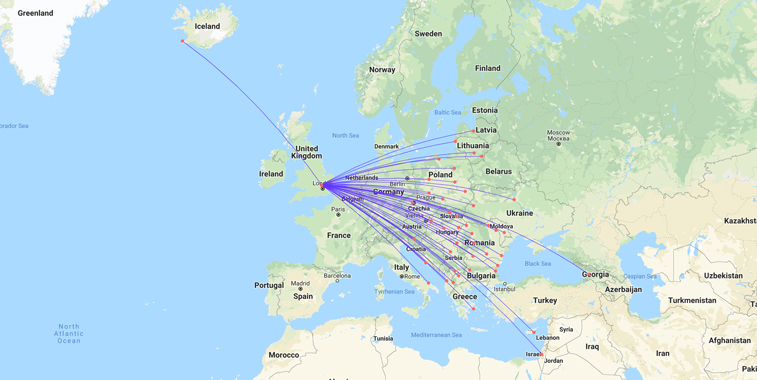 Iceland is just one of seven new country markets added by Wizz Air from its London Luton base since last May, with the others being Greece, Israel, Cyprus, Italy, Albania and Georgia. This summer, the ULCC will offer 44 destinations from its largest airport in terms of capacity, which is behind the number offered from its home base at Budapest (56).