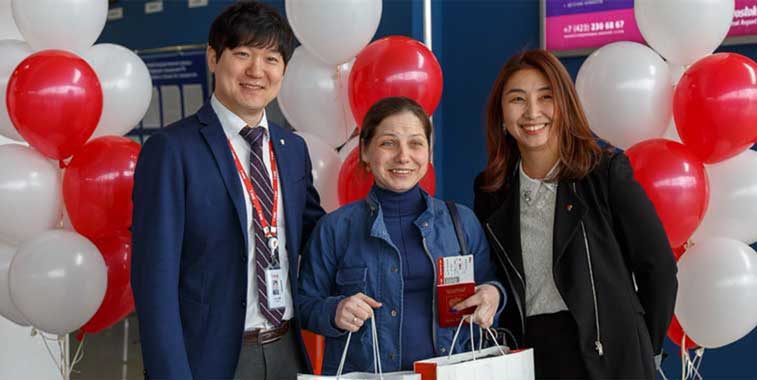 t’way air grew its international capacity by 158% from 2016 to 2017. According to anna.aero’s New Routes Database, the most recent addition to its international schedule was the route between Daegu and Vladivostok in Russia, which it launched in April and operates three times per week. Russia is a new entrant to the airline’s international network this summer.

t’way air is a South Korean LCC which began operations with two 737-800s in 2010. According to ch-aviation, the airline has now built its 737-800 fleet up to 20 active aircraft. This analysis will focus on the airline’s international network developments, since it was not possible to obtain consistent data for its domestic flights. OAG schedules show that t’way air was the fifth largest South Korean airline in terms of international capacity in 2017. As an indication of the share of the airline’s domestic/international seats, about 61% of its total two-way capacity will be operated on international links during the week commencing 22 May.

t’way air did not offer any international services in 2010 or 2011, choosing to focus on domestic links instead. In 2012 the LCC introduced its first international routes, with 281,000 seats available on such services during that year. It has been adding capacity on international markets ever since. On two separate occasions the carrier witnessed year-on-year capacity increases of more than 100% on international flights. This occurred in 2015 and again last year, when capacity grew by 158% from 2016 to 2017, with international seat numbers increasing from 1.5 million to 3.94 million. 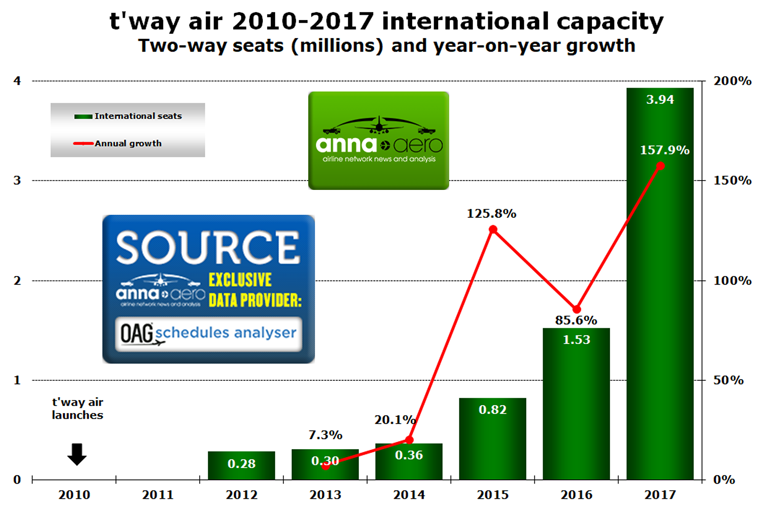 An analysis of schedule data for the week commencing 22 May reveals that four of t’way air’s top airports for international services in S18 are located in its home market of South Korea. Seoul Incheon tops the list as the busiest airport in the LCC’s international schedule, with the most departing seats and flights. The LCC will operate to 20 international destinations across nine different countries from Incheon during the week commencing 22 May, but does not offer domestic links from the Seoul facility, preferring to use Seoul Gimpo for its internal connections. The other South Korean airports in the top 12 are Daegu (which will offer 10 international destinations across seven countries), Busan and Jeju. All of the airline’s top ranked airports for international flights are in the Asia Pacific, but this is unsurprising given its fleet disposition. The largest non-Korean airport for international departures is Osaka Kansai. 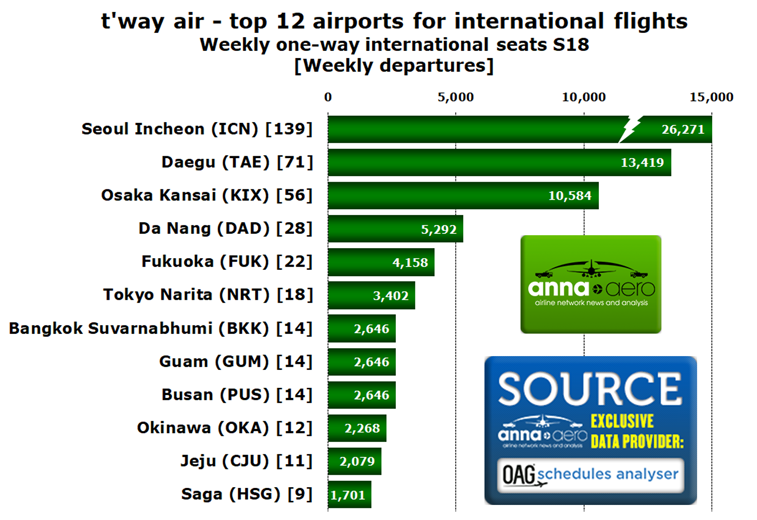 Source: OAG Schedules Analyser – direct flights only. Data is for week commencing 22 May.

Busan and Jeju were both new entrants to the top 12 in S18, with neither airport seeing international services from t’way air during the equivalent week last summer. This year the carrier will offer daily flights from Jeju to Osaka Kansai, and four times weekly services from Jeju to Tokyo Nartia. Most of the top-ranked airports are witnessing an increase in international services with the Korean LCC this summer, with Bangkok Suvarnabhumi leading the growth rankings after the carrier added a daily link from the Thai-capital to Daegu. The only top 12 airport to see a cut in international capacity this year is Fukuoka which will see 21% fewer weekly seats compared to S17.

t’way air will serve 12 international markets from South Korea during the week commencing 22 May. The largest of these is Japan, which will account for more than half of the airline’s weekly one-way international seats from its home market in S18. Four of the LCC’s largest international routes link South Korea to Japan. The biggest of these is the connection between Seoul Incheon and Osaka Kansai, which will be served by 3,969 weekly one-way seats this summer, operated by three daily flights. The next largest international market for t’way air is Vietnam, and the link between Seoul Incheon and Da Nang is the airline’s third biggest international sector during the week under analysis. The vast majority of the LCC’s international routes directly link a South Korean airport with a foreign country, but the carrier also operates one airport pair outside of its home market. This is the daily service between Osaka Kansai and Guam. 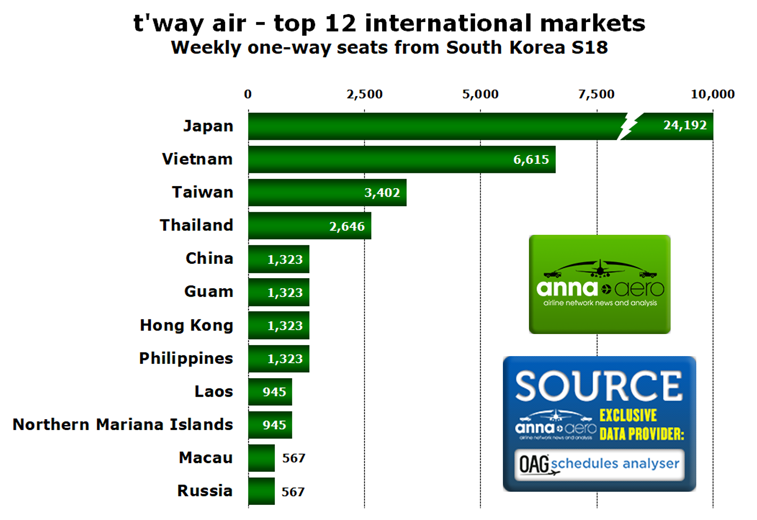 Source: OAG Schedules Analyser – direct flights only. Data is for week commencing 22 May.

There is one new entrant in the country market rankings for S18, with t’way air introducing flights to Russia since last summer. According to anna.aero’s New Routes database, it introduced three times weekly services between Daegu and Vladivostok in April. Most of the international markets have witnessed growth compared to the equivalent week from last year, with Taiwan and Thailand seeing a doubling in capacity. The only market to see a cutback over this period is Laos. 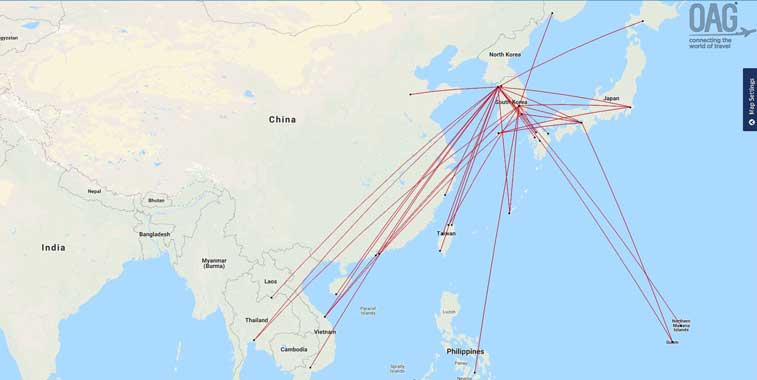 t’way air’s international route map for the week commencing 22 May. Seoul Incheon is the carrier’s main hub for international flights but it also operates one airport pair outside of its home market, with a daily service between Guam and Osaka Kansai. Japan is the LCC’s single biggest international market accounting for more than half of its weekly international seats from South Korea in S18.