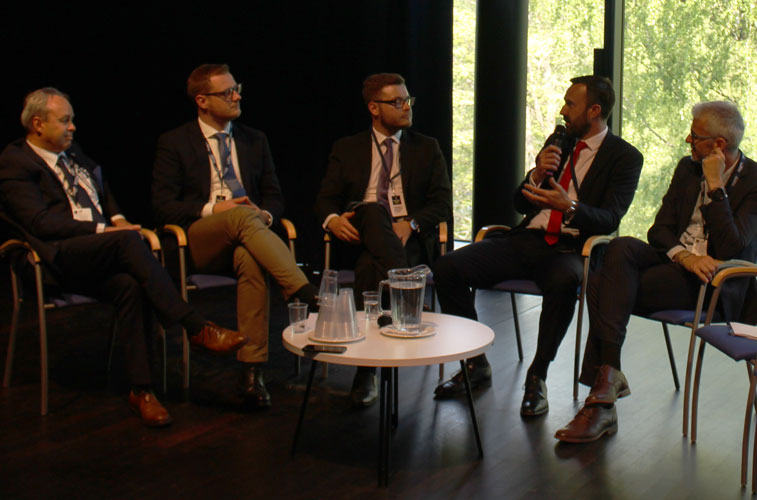 anna.aero’s Assistant Editor Jonathan Ford (centre) was in Finland last week attending the Tampere Aviation Forum III where he chaired a panel discussion on the challenges facing regional airports. Topics of discussion included how such facilities must operate in order to be unique and stand out, plus the issues they face from multiple stakeholders. Taking part on the panel were: Jean-Christophe Minot, Director, Lille Airport; Sebastian Maurans, Head of Sales, Bremen Airport; Andrew Murphy, MD, Shannon Airport; and Jordi Candela, Director, Aeroports de Catalunya.

On 16 May anna.aero attended the Tampere Aviation Forum III, hosted at Tampere Hall. The event was organised to discuss the challenges of the continuing development of competition in Europe, and the changing strategies of airports and airlines. The forum also touched on how regional airports must operate in order to be unique and stand out, plus the issues they face from multiple stakeholders when attracting new business. Speakers at this year’s event included representatives from two of Tampere’s serving airlines – SAS and airBaltic – plus CMS Belgium, Oxera, Business Tampere, RDC Aviation and a number of regional airports including Bremen, Lille, Shannon and a number of facilities that fall under the Aeroports de Catalunya umbrella.

This is the second time that anna.aero has participated in the Tampere Aviation Forum, having attended the previous event in December 2016. During that forum, the theme of the event was to discuss topics including the growth of air transport and how it affects regional development, more specifically, how it can contribute to the improvement of Finland’s economy. These were topics which were also briefly touched upon during this year’s conference as well.

Tampere’s on the move

In 2017 Tampere Airport handled just over 230,000 passengers, a 10% increase in traffic versus 2016. 2018 has also got off to a flying start for the Finnish airport, having greeted over 49,000 passengers during Q1, up 13% on the same period of last year. The news gets even better for Tampere, with it having recently secured year-round services with Ryanair on its route to Budapest, with the Irish ULCC also offering Bremen services this summer. 2018 will also be the first full-year of airBaltic services from Riga, a route which has now been in place for over 12 months. These are just a few factors which would have helped persuade SAS to take the decision to launch a weekly winter seasonal service to Malaga on 3 November.

The city is making several infrastructure investments at the moment, and by 2030, the Tampere central area is expected to welcome approximately 15,000 new jobs, helping contribute to a 23% rise in the population of the central zone. This means that by 2030, Tampere, including its outer regions, will have a population of 563,000 (63,000 more than today’s level).

anna.aero’s Jonathan Ford would like to thank Marja Aalto, Director Air Transport Development, Business Tampere, for inviting him to Tampere to take part in the forum and to discover the best of Finland’s largest inland city. Take a closer look below at this year’s event in more detail. 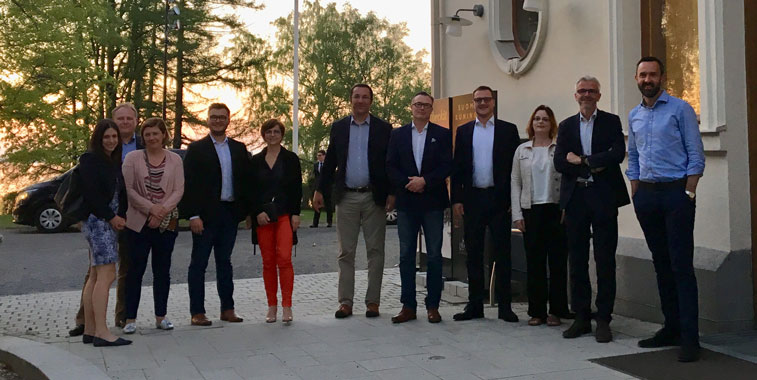 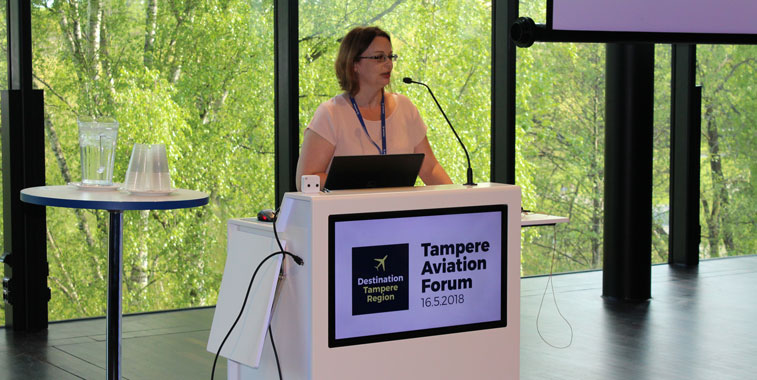 The Tampere Aviation Forum III was kick-started by Marja Aalto, ‎Director, Air Transportation Development, Business Tampere. “I want to thank you all for coming to Tampere and allowing us to discuss the issues in the European aviation industry and how they impact on regional airports.” After a brief introduction to the day’s planned agenda, Aalto welcomed the first speaker to the podium, Michele Granatstein, Principal, Oxera, a European economics consultancy firm. 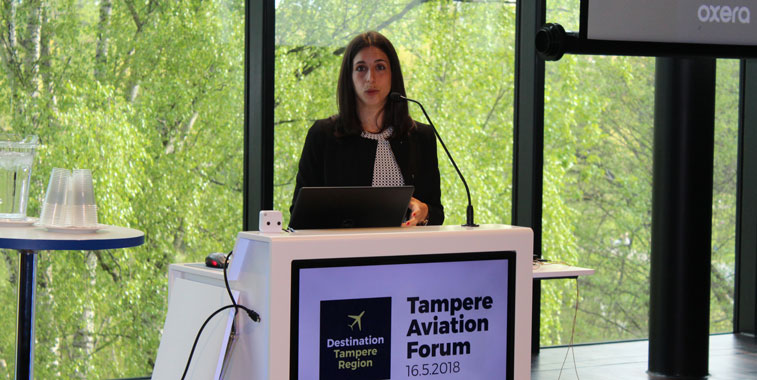 Michele Granatstein spoke on the continuing development of airport competition in Europe. “We want to have competition as it is good for the consumer,” she commented. Along with talking about the acceleration of traffic growth on the continent since 2013, Granatstein mentioned that the challenges were tough on regional airports as “airlines have good information about airport negotiations due to the growing trend of pan-European operations.” Other topics brought up in Granatstein was the changing face of competition, say that it was no longer at a local level. “Not only are regional airports competing, but European hubs are competing not just with hubs on the continent, but on a global level as passengers have more choice in the routes they take, particularly through the Middle East and Turkey.” Before finishing her presentation, Granatstien also discussed how point-to-point routes were also impacting hub competition. “In 2011, 7% of connecting traffic through London Heathrow could have took a non-stop flight, this is a figure which grew to 23% in 2016.” The next speaker to the podium was Annabelle Lepièce, Partner, Head of Competition, CMS Belgium, who spoke about the implementation of the EU aviation strategy for Europe. Lepièce is active in the airport and air transport sector, offering legal advice on all aspects of European law relating to the industry such as public financing, handling, airport charges, security and safety. “The objective is to make the EU a world leader for aviation,” commented Lepièce as she spoke on the aviation strategy for Europe, as stated by the European Commission in December 2015. Lepièce in her presentation also briefly touched on the issue of Brexit, and how the outlook did not look great if a sound agreement was made between the two negotiating parties. Following on from Granatstein and Lepièce’s presentations, it was then time to take some of the concepts discussed and bring them to a regional panel discussion, moderated by Jonathan Ford, Assistant Editor, anna.aero. Ford was joined by Jean-Christophe Minot, Director, Lille Airport; Sebastian Maurans, Head of Sales, Bremen Airport; Andrew Murphy, MD, Shannon Airport; and Jordi Candela, Director, Aeroports de Catalunya, with the five bouncing ideas back and forth on topics ranging from the importance of relationships with airport stakeholders and how airports work with them, plus how to uniquely market your airport in order to stand out from the competition. On the latter topic, Murphy commented by saying: “One of the biggest challenges is that competition has gone from being just a local or even regional threat, but to a global playing field. For Shannon, we are not just competing with European airports for a US service, but given our geographical location, we are also in competition with US West Coast airports, as carriers who we want to do business with could easily fit in a rotation to those airports which are an equal distance from East Coast cities as Shannon is in Ireland.” Other factors which were talked about during the discussion included the challenges of working under an airport group and how that can limit opportunities, trying to keep airline charges low while airport costs rise, challenges of trying to diversify the traffic mix of airports, plus the difficulties of doing business with the constant change of airline strategies. 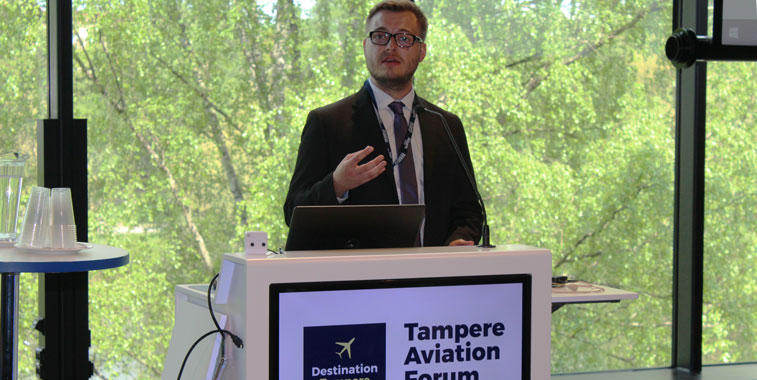 After a lunch break, the afternoon session was launched by Jonathan Ford, Assistant Editor of anna.aero, who spoke in detail of the outlook for the European aviation market. “Scheduled seat capacity in Europe is expected to grow by around 6.1% this summer,” commented Ford. He also drew on the fact that passenger traffic is growing at a faster rate from regional airports than it is from Europe’s leading hubs. “Airports over 20 million passengers in Europe last year saw an average growth rate of 7.1%, while airports below this level encountered an average growth rate of 11%. Breaking down the below 20 million category further, the average growth rate of airports which handled below two million passengers was 13%, while above this total it is only 10%, indicating that regional airports are seeing better growth rates across Europe in general.” Along with traffic growth trends, Ford touched on the changing demographic mix of passengers, and highlighted that ACI Europe estimated that soon the Millennial traveller generation will account for 38% of passenger traffic, while the development of the LCC concept will result in around 50% of seats flown in the market this year being operated by a low-cost airline. Finally, Ford mentioned that more and more airports in Europe are starting to become congested, meaning that for regional airports it will be tougher to attract flag carriers to increase hub connectivity due to the capacity limitations they are facing. Following Ford, Wolfgang Reuss, SVP Network Management, airBaltic, presented on the developments at the airline and how it has been a successful year for the carrier, including its new route to Tampere, and he stated that the airline wanted to grow in Tampere. “2017 was a very good year for airBaltic, having launched 13 routes, and 2018 shows the same signs of success as well. This year we have launched eight routes from Riga, with us also launching a service from Tallinn to London Gatwick, while routes from the Estonian capital to Oslo Gardermoen and Stockholm Arlanda will commence this coming winter season.” Reuss spoke in-depth on the airline’s involvement in the Finnish market, a country it first entered back in 1995 with five weekly flights from Riga to Helsinki. “Today we offer up to five daily flights to the Finnish capital, a daily link to Turku and the six times weekly link to Tampere that we launched in March last year.” On a side note, Reuss confirmed that the carrier is planning to become an all-Bombardier fleet, with plans to withdraw the carrier’s 737s from the fleet within the next five years. 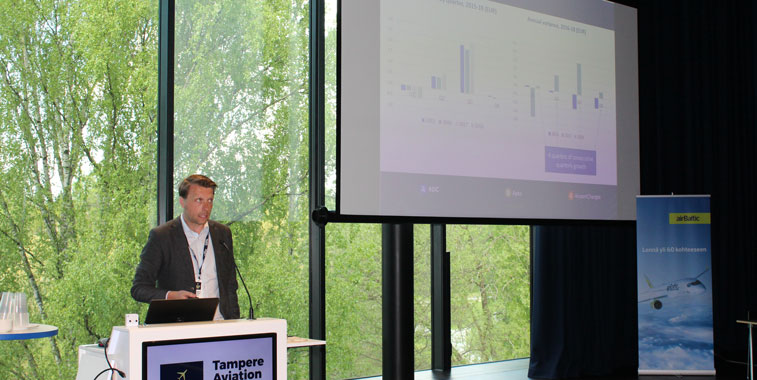 The final speaker of the day was Iain Smith, Director, RDC Aviation Economics. Smith’s presentation talked about how the company’s product portfolio helps form strategic business cases to present to airlines, before moving onto the current performance of airlines, specifically LCCs, across Europe before going into further detail and breakdown of profitability per hub, route and so on. “easyJet saw profits jump 95% between April 2017 and March 2018, while Norwegian saw a slump of over €250 million, an impact of its growing focus on the transatlantic market which is losing money.” Smith also talked about how the UK LCC profit was down 23% during the period analysed, but was still the third most profitable market after Spain and Italy. “Tampere is a very good market for SAS, with it being one of its most profitable regional routes from Stockholm Arlanda,” added Smith as he focused on the markets at a regional level. “airBaltic is also profitable here.” Finally Smith touched on the fact that airlines will be increasing fares as they look to improve their levels of profitability going into winter.