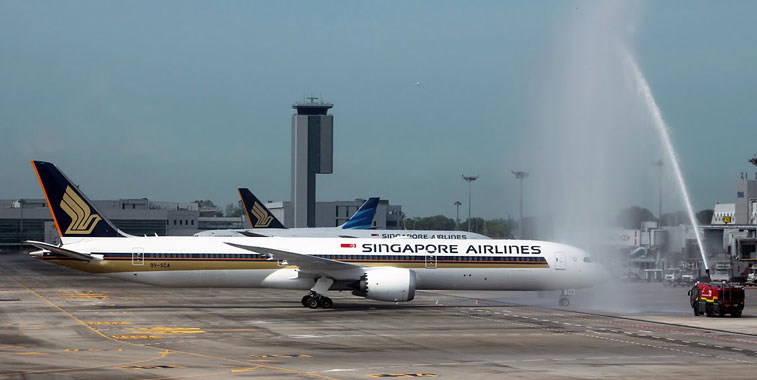 Singapore Airlines received the first-ever commercial 787-10 in March, with the aircraft receiving a ceremonial baptism as it touched down at its new base in Singapore. “It is an honour for us to be the world’s first airline to take delivery of this amazing aircraft,” said Goh Choon Phong, CEO of Singapore Airlines. “The 787-10 is magnificent and it will be an important element in our overall growth strategy, enabling us to expand our network and strengthen operations.”

During Q1 2018, Airbus and Boeing handed over 305 combined aircraft between them, equal to the number of units both distributed during the same quarter of 2017. This is a result that has been achieved thanks in part to the two manufacturers upping capacity in March by 8.1%, having seen productivity drop 13% in February. As a reminder, the two increased their combined unit delivery rate in January by 2.9% over the same month of 2017. The table below further breaks down the companies’ delivery rates for Q1 2018 and how they differ with the results encountered during the first quarter of 2017.

What can be seen in the table above is that Boeing has opened quite the lead over Airbus in the 2018 delivery race so far, having handed over 63 more units that its European rival during the first three months of the year. The US manufacturer delivered 35 more units than Airbus in March. 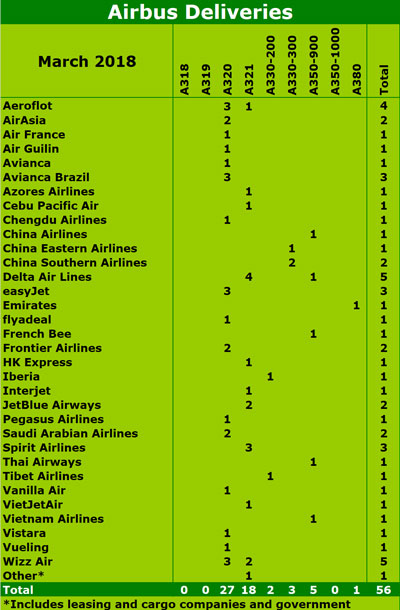 Airbus handed over 56 aircraft in March, accounting for only 38% of the total deliveries made between it and Boeing that month. The European company’s result for the third month of this year is also down 9.7% (six units) from the 62 aircraft it managed to hand over to airlines during the same month of 2017. Airbus’ unit deliveries in March were made-up of 45 narrow-body and 11 wide-body variants. This compares to 47 narrow-body and 15 wide-body deliveries in March 2017.

It should be noted that 14 of the airlines that received Airbus aircraft in March 2018 are Asia-based (16 units), with nine in Europe (18 units), six in North America (14 units; includes the aircraft listed under ‘Other’), three in the Middle East (four units), and two in South America (four units).

The most popular aircraft type to be delivered in March was the A320 (27 units), followed by the A321 (18 units). Aeroflot, Avianca Brazil, easyJet and Wizz Air were the leading customers of the A320, with the four carriers collecting three each respectively. The number one recipient of the A321 was Delta Air Lines, with the SkyTeam member collecting four of the stretched variant in March.

Looking at the wide-body market, Airbus handed over 11 aircraft, with the A350-900 being the premier model for the world’s airlines. China Airlines, Delta, French Bee, Thai Airways and Vietnam Airlines all collected one each. Along with the A350-900, three A330-300s were delivered, with all of them going to Chinese carriers, with two A330-200s also being distributed. One of those was also designated for China, courtesy of Tibet Airlines’ order. Emirates also picked up its latest A380. 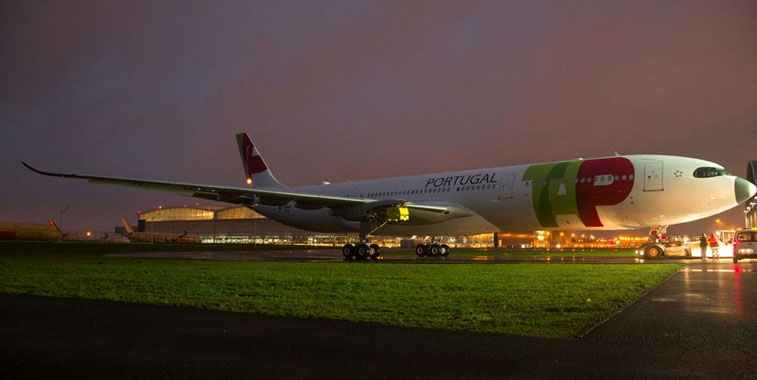 While no significant Airbus deliveries occurred in March, the company did roll-out the first A330-900neo, which is destined for TAP Air Portugal. The Star Alliance member has an order for 14 of the type, plus lease agreements for a further six. This aircraft is expected to join the Portuguese carrier’s fleet latter this year. 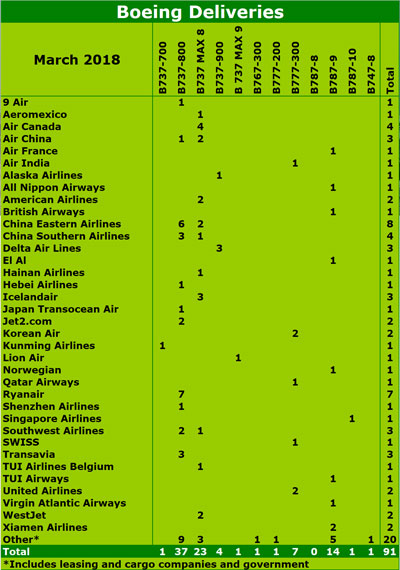 Boeing distributed a total of 91 aircraft in March, with the North American giant accounting for 62% of all deliveries between it and Airbus during the third month of the year. The company’s productivity rate climbed by 23% in March, having only managed to deliver 74 aircraft during the same month of 2017. Boeing’s unit deliveries in March were made-up of 66 narrow-body and 25 wide-body variants. This compares to to a 47/27 ratio in March last year.

The most popular Boeing aircraft type to be delivered in March was the 737-800, with 37 units being distributed. Ryanair was the leading customer of the -800, picking up seven from Boeing. The 737 MAX 8 was also a highlight, with Boeing noting 23 hand overs for the unit type. On the narrow-body front however, the most significant development for Boeing was the delivery of its first 737 MAX 9, with it destined for Lion Air in Indonesia. Four 737-900s were also delivered in March, with these going to Delta Air Lines (three units) and Alaska Airlines (one unit).

With regards to Boeing’s wide-body production, the most memorable delivery for March 2018 was the handing over of the first 787-10, with Singapore Airlines being the premier customer. “It is an honour for us to be the world’s first airline to take delivery of this amazing aircraft,” said Goh Choon Phong, CEO of Singapore Airlines. “The 787-10 is magnificent and it will be an important element in our overall growth strategy, enabling us to expand our network and strengthen operations.” Along with the -10, 14 787-9s were delivered in March, while no 787-8s made it onto the delivery books in March. One 747-8 was also collected by a cargo airline in March, namely UPS according to Boeing data. Moving on to the classic Boeing wide-body types, seven 777-300s were picked-up in March, along with one 777-200 and one 767-300, with both of the latter two, like the 747-8, going to cargo carriers. 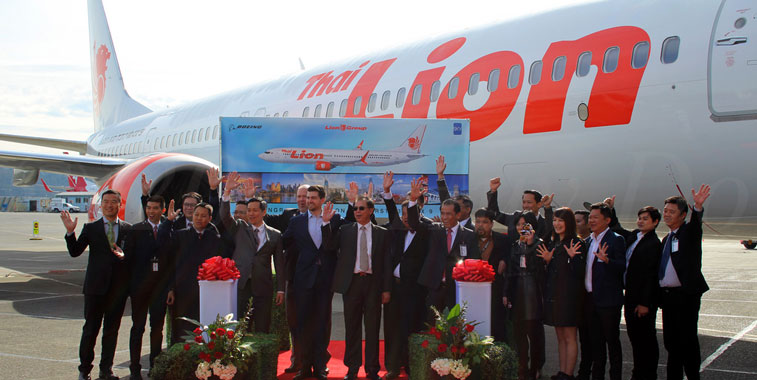 Lion Air became the first-ever recipient of the 737 MAX 9 in March when it collected its first aircraft in Seattle. Kevin McAllister, President and CEO of Boeing Commercial Aircraft, said the Lion Air Group serves as the “perfect example of how the 737 MAX family provides a common fleet solution across the single-aisle spectrum.”