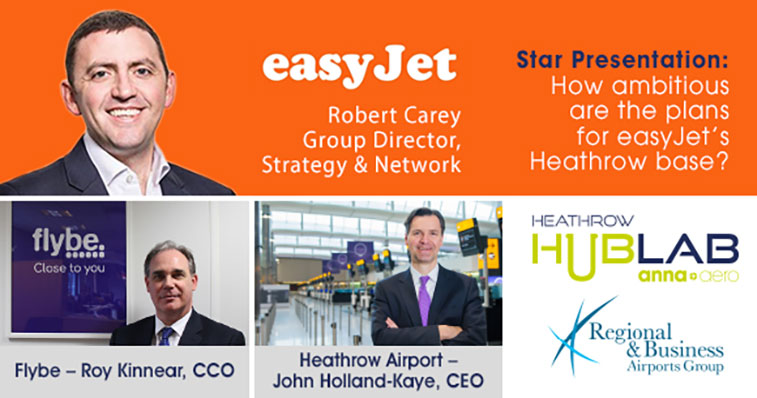 In the latest of a series of analyses leading up to the anna.aero-RABA Heathrow HubLAB Conference next month, we take a look at which European airports are missing from Heathrow’s route network. Heathrow HubLAB is the FREE-OF-CHARGE Heathrow Connectivity Conference taking place at the Heathrow-hosted British-Irish Airports EXPO at London Olympia 12-13 June 2018 (200 exhibitors, 3,000 visitors). This FREE event is an important opportunity for airports to find out more about airline plans to provide new services from an expanded Heathrow. The Star Presentation will be made by easyJet’s Group Director of Strategy & Network Robert Carey, who will explain the plans for a Heathrow easyJet base…something which is highly relevant to…

A key benefit of Heathrow Expansion, including a third runway, is to make extra capacity available for new links to unserved markets. This analysis reveals the 25 largest airports in Europe without a connection to Heathrow.  We also contacted airports on the list and asked them to make a case for why they should be connected to Europe’s largest hub – and we’ve included the best answers below.

The table below lists the 25 largest European airports without a direct service to Heathrow in S18. Three of the top four, and five of the top 25 airports are in Turkey, including Ankara, the Turkish capital. There are also four Spanish and four Italian airports in the top 25. Only seven of the top airports are located in cities which feature alternative airports with Heathrow connections. The Baltics particularity stand out as an underserved region, with the only direct Heathrow flights this summer being a twice-weekly service to Tallinn. Riga is crying out to be served.

12 of the top 25 airports were previously identified by anna.aero as being among the 30 largest markets with London connections, but no flights to Heathrow. Six of these: Alicante, Berlin Schönefeld, Naples, Porto, Rome Ciampino and Riga were among the 10 largest airports with existing London capacity, but no Heathrow links. 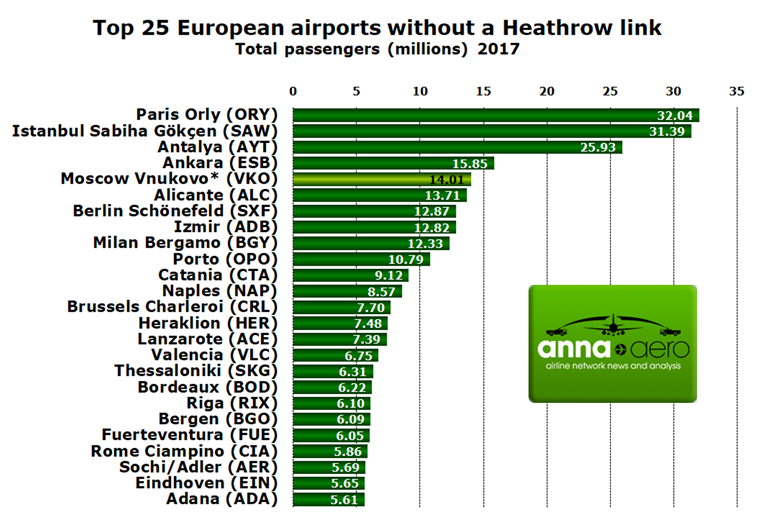 “Why my airport should have a Heathrow service” – the answers

anna.aero invited some of the top 25 European airports without a Heathrow route to make their case for why they should have a link to the London hub.

TAV Airports, which runs both Ankara and Izmir airports, offered its business case for Heathrow links to both facilities. “Ankara is the capital city of Turkey, but lacks direct flights from London Heathrow,” says Can Canbolat, Marketing Specialist, TAV Airports. “About 20,000 one-way passengers annually are travelling from Ankara to the UK via Istanbul Atatürk, Istanbul Sabiha Gökçen and Munich, due to the lack of direct services, and half of these connecting passengers are travelling to Heathrow. There is also substantial connecting traffic from Ankara to North American destinations via different airports, which could be exploited and connected via Heathrow if there were an Ankara-Heathrow direct service. With its huge population and catchment area of up to six million people, plus ethnic, business and educational links with the UK, and year-round seasonality, Ankara is a strong candidate for a direct Heathrow service.”

“Izmir is the second-largest commercial city in Turkey with 26,000 one-way passengers connecting via other airports onward to the UK,” says Canbolat. “About 12,000 of these transiting passengers are heading for Heathrow. Like Ankara there is huge potential for connecting traffic for onward services to North America, which could be handled via Heathrow. Izmir has a population of five million people, while its catchment includes seven million.”

“Milan Bergamo expects to handle close to 13 million passengers and over 126,000 tonnes of cargo in 2018, and is the third-largest airport in Italy both for passengers and freight,” explains Giacomo Cattaneo, Director of Commercial Aviation, SACBO. “Bergamo is situated in the middle of Italy’s wealthiest area, in a region of more than 10 million inhabitants, 900,000 companies and which produces more than €128 billion in GDP. Milan city is within easy reach, but Bergamo is also the first choice for the millions of inhabitants of Monza. Bergamo, Brescia and the vast area in north-east Italy, which is completely unserved from Heathrow unless you get to Venice Marco Polo. Such a wealthy, populated and productive area needs accessibility to Heathrow, and to the world.”

“We already have a large market to London. In 2017, 458,000 passengers used existing routes to Gatwick, Stansted and Luton,” explains Jean-Luc Poiroux, Commercial Development Director, Bordeaux Airport. “We believe there is much more potential for corporate traffic on this city pair with business travellers currently unable to get to London early enough in the morning. In addition, there is also huge potential for long-haul markets, mainly to North America and Asia, from and to Bordeaux. Today, these markets are totally untapped by British Airways. Unlike other legacy carriers, BA currently considers Bordeaux only as a leisure route. With good access to its main hub at Heathrow, it would not only pick up business demand, but worldwide connecting traffic too.”

“A direct connection between Riga, the leading airport in the Baltics, and London Heathrow is required,” says Laura Audariņa, Route Development Manager, Riga Airport. “The Riga-London city pair has seen year-on-year growth since 2013 and that trend continues. We currently have services to Gatwick, Luton and Stansted, but a connection to Heathrow has been long-awaited by business travellers. A link to Heathrow would also give our passengers additional opportunities for transferring to long-haul markets that are currently unserved from Riga.”

“Eindhoven expects to welcome 6.3 million passengers in 2018 and is the biggest European airport without a direct hub connection or a full-service national carrier on board,” explains Dean Boljuncic, Head of Route Development, Eindhoven Airport. “Nevertheless we are still one of the fastest growing airports in Western Europe. The North Brabant province where Eindhoven is located had a 20% higher GDP than the average Dutch GDP in 2016. Eindhoven serves the Brainport region – ‘The Sillicon Valley of Europe’ – with world class hi-tech and automotive companies such as – ASML, Philips, VDL, Tesla, NXP, Vanderlande, DAF, OCE, Shimano, Fuji Film, Huawei etc. The London market is currently the second largest from Eindhoven  with more than 270,000 annual passengers using the Stansted route. According to MIDT data there is a demand from for a Heathrow service with an estimated market size of nearly 1.45 million passengers (one-way). About 1.4 million of these passengers would be looking to connect over Heathrow through the oneworld alliance network, and this would be demand coming from the hi-tech industry.”

The 25 airports identified in this analysis are ranked according to annual passenger numbers in 2017. The one exception is Moscow Vnukovo, for which 2016 figures have been included, since full-year data was not available for 2017. The top 25 list may not be fully inclusive since it is only based on data from reporting airports that are included in anna.aero’s European Airports Traffic Trends database.