Leeds Bradford-Frankfurt is “Skyscanner Unserved Route of the Week” with 22,000 searches; next hub connection for bmi regional?? 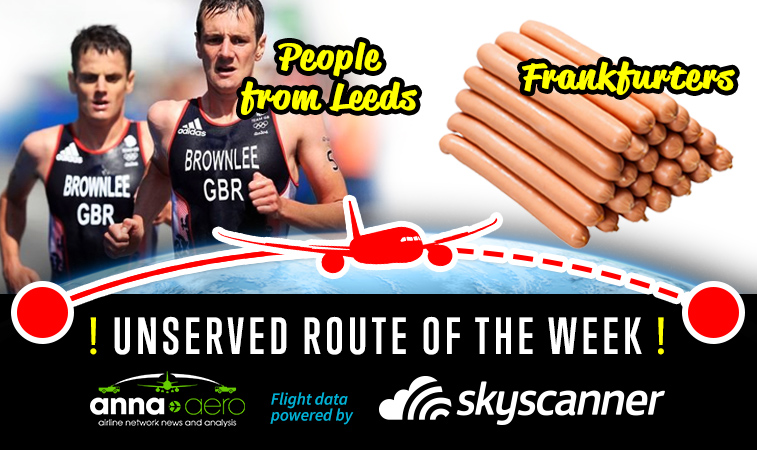 People from Leeds – not just the two above, but thousands of them – are desperate to get their hands on some Frankfurters, and they will probably east some sausages while they are in Germany too! We think that a relatively high frequency operation, probably flown by bmi regional, would be the best solution to this unserved airport pair, which has lots of business travellers ready to fly.

With nearly 22,000 searches in the past 12 months, a potential city pair from Leeds Bradford to Frankfurt has been identified as this week’s “Skyscanner-anna.aero Unserved Route of the Week” – a powerful analysis based on aspirational data captured from the Skyscanner.net flight comparison site used by +60 million unique visitors per month. “It is great to receive confirmation from Skyscanner that Frankfurt is Leeds Bradford’s most searched for unserved European destination, given Leeds is the UK’s second largest financial centre and the city’s legal firms work on contracts across the globe,” says Chris Sanders, Aviation Development Director, Leeds Bradford Airport. “With so many business links between Yorkshire and Germany, including a large BASF operation in Bradford with headquarters near Frankfurt, this helps support the case for new routes to Germany and the improvements to global connectivity that we are seeking for Yorkshire.” 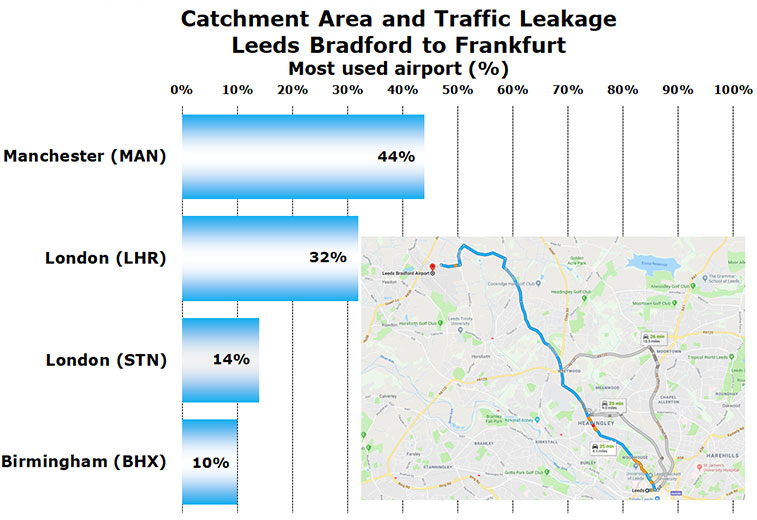 Matt Williamson Skyscanner’s Commercial Executive says: “Leeds Bradford serves less than 1% of the catchment (50 km around the airport) going to Frankfurt. With better service, such as a non-stop operation, Leeds Bradford will capture most of that traffic currently leaking to competing airports.”

anna.aero thinks bmi regional or Lufthansa should start this link

Skyscanner demand on this week’s unserved route shows a slight preference towards the Leeds Bradford end of the city pair, with a 69/31 split, so on this basis we looked at potential carriers at the UK origin first. According to OAG schedules for the week commencing 23 May, the largest carrier at Leeds Bradford is Jet2.com (34% share of weekly seats). The LCC’s route network from the airport presently consists of 46 destinations, of which one is in Germany – namely a twice-weekly service to Berlin Schönefeld. It should be noted that this is currently Jet2.com’s only route to Germany from anywhere on its network, with the airline also having no market presence in Frankfurt at the moment, so it should be viewed unlikely that the LCC will be considering a new route to the German city from Leeds Bradford in the short term. Up until recently the airline also served Düsseldorf from Leeds Bradford, a route now flown by Flybe.

Although Ryanair is the second-largest carrier (16% share of weekly seats) at the Yorkshire airport, presently offering 17 destinations, this city pair is very much a business route given Sanders’ comments above. On this basis, our data elves have considered other carriers in the market which could offer a relatively high frequency service, essential for the business traveller, between the two cities. One carrier which provides this type of service from another UK airport to Frankfurt is bmi regional. Its 17 times weekly operation from Bristol to the German hub is exactly the type of operation that this sector demands and is therefore our primary suggestion for serving this route from the UK end.

Contemplating the German end of the route, Frankfurt’s leading capacity provider of its current 91 serving airlines is unsurprisingly Lufthansa, which offers 62% of the airport’s weekly seats. While the carrier heavily serves the UK, presently offering flights to London Heathrow (83 times weekly), Manchester (34), Birmingham (28), London City (16), Edinburgh (14) and Glasgow (seven), there are a handful of other UK airports which will be vying for the Star Alliance carrier’s attention. Some of the these are bigger airports than Leeds Bradford in passenger throughput terms, including London Gatwick (served by Lufthansa between 2011 and 2013), London Luton, Newcastle and Liverpool. The latter two facilities will no doubt be delivering a similar pitch to Lufthansa as that being provided by Sanders at Leeds Bradford, so it will be interesting to see if one, if any, of these airports makes a breakthrough to become the airline’s next UK service. It is interesting to note that the UK market has seen some development from Lufthansa in recent months, with the addition of a daily Glasgow service in March, so the market is clearly in the carrier’s focus at this time. 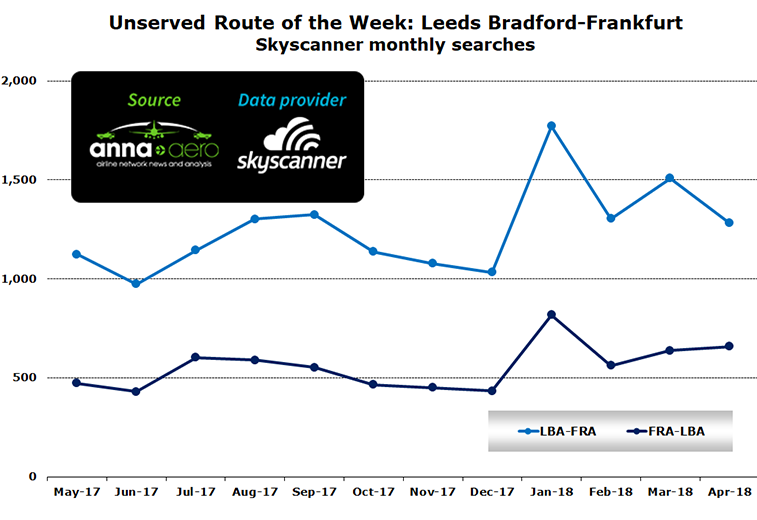 When looking at the previous year of search data (graph above), the busiest month (from Leeds Bradford) is January 2018, with nearly 1,800 searches. Given the anticipated booking profile of the route – short-haul business – around 85% of travellers on this potential sector will want to book between one to two months before departure, so this would seem to indicate that the busiest months for traffic will be between February and March. Using the same methodology for the Frankfurt end of the sector, the peak months for traffic will also be between February and March.

According to OAG Traffic Analyser, because there is no direct service, the top two connecting options chosen by those passengers who did book travel between Leeds Bradford and Frankfurt in the last 12 months (year ending March 2018) indicates that the majority of connecting travellers used Amsterdam (52%) and Heathrow (46%). A total of eight different transfer airports were used by travellers looking to connect between the two cities.

Indeed, an O&D market that is not served by a non-stop flight will typically display a low purchase rate and low traffic. In this instance Skyscanner’s Travel Insight indicates a monthly average purchase rate of 2.2% for the Leeds Bradford to Frankfurt route (see graph below). Therefore, if there was a Leeds Bradford to Frankfurt route, and if bookings performed in line with the “Skyscanner market average” for direct services at both airports (17.5%), the airline operating this route could immediately expect an improved purchase rate of nearly 700%, without any increased marketing spend. However, with nearly 22,000 annual searches in the last year, and with the sector being operated by an appropriately-sized aircraft for the type of route, a five times weekly service should be immediately viable for the airline choosing to start this potential city pair. 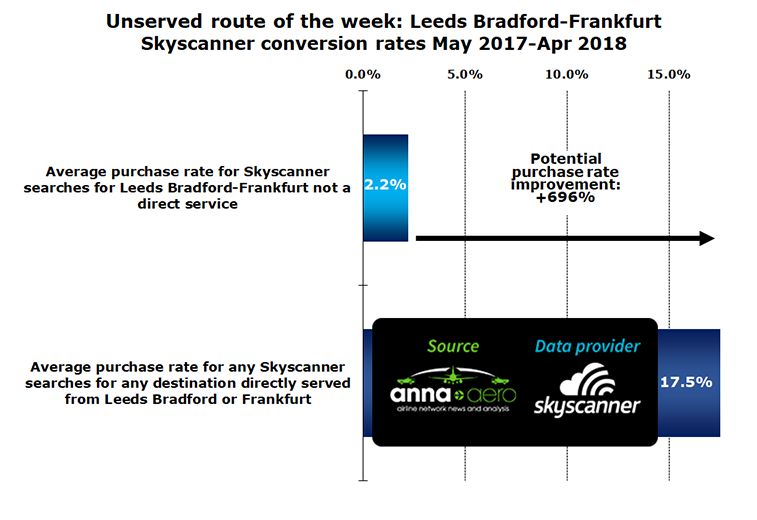