The Icelandic air bridge between US and Europe; Copenhagen top airport from North America, but London leading city 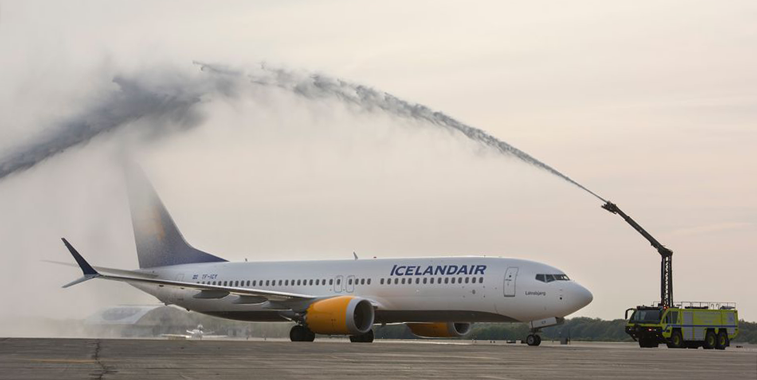 Icelandair started flights to Cleveland on 16 May, with the destination for next month’s JumpStart being the carrier’s first route to be launched on its recently acquired 737 MAX 8s. Although the sector will of course stimulate direct demand between the US city and its home base, Icelandair will want to attract a number of passengers onto its connecting services into Europe. Based on data for last year, anna.aero has worked out that roughly 56% of connecting traffic over Reykjavik/Keflavik in 2017 was made-up of North American citizens, with the top final destination being London.

With WOW air having added Cleveland, Cincinnati and Detroit, St. Louis and Dallas/Fort Worth to its S18 network from Reykjavik/Keflavik, while Icelandair has, or will have, launched Cleveland, Baltimore/Washington, Kansas City and San Francisco, the power of Iceland as a hub between North America and Europe has certainly grown in recent times. This fact can also be combined with the country being an exciting destination itself. With many more US airports looking to attract either of these airlines, or indeed a European carrier to commence transatlantic services, anna.aero has decided to take a look behind the recent trends in the North America to Iceland market, along with the connecting flows into Europe. As ACI-NA’s JumpStart conference takes place early next month in Cleveland, with WOW air being a confirmed carrier attending the event, this information will be of interest to airports wanting to attract the LCC. To find out a list of the top 24 unserved US cities from Europe, with the then number one Kansas City now served, take a look at anna.aero’s research on the topic from last summer.

Data from Statistics Iceland shows that the number of US citizens passing through Reykjavik/Keflavik has surged phenomenally during the past five years. Information shows that the annual numbers going through the Icelandic hub went from 119,712 in 2013 to 576,403 last year, representing a growth rate of 381% over the five-year period.

During 2013, the differentiation in monthly passengers between the busiest month (July; 22,998 US citizens) and the lowest (February; 6,743) was 241%. However, despite the vast growth in demand, the variance between the high month in 2017 (July; 80,622) and the low (December; 26,401) was 205%. While this is still a massive seasonality challenge, it shows that the market has become a little less seasonal, although the summer months are still very peaky. 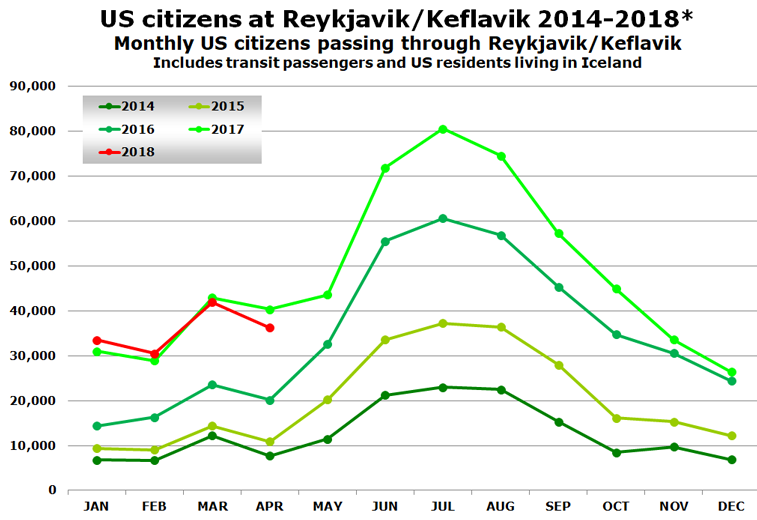 Source: Statistics Iceland. *January to April data only for 2018.

While the boom over the past few years has been mighty, it should be noted that during the first four months of 2018, the number of US citizens passing through Reykjavik/Keflavik has fallen by 0.8% versus the same period in 2017. In January numbers were up 8.0%, February reported a 5.6% rise, however it was in March (-2.5%) and April (-10%) when the trend changed. Nonetheless, this could be put down to Icelandair losing a proportion of its capacity as it starts to incorporate the 737 MAX 8 into its fleet, replacing the older 757-200s which it currently has, as the MAX 8s have 30 less seats. On a side note, Icelandair’s passenger numbers in April fell by 1.8% compared to the results of April 2017.

Along with the US, Canada is also a big market for Iceland, with the number of Canadian citizens passing through Reykjavik/Keflavik reaching over 103,000 in 2017, up 330% when compared to 2013, similar to the growth pattern seen of US citizens travelling on Icelandic-bound services. If we combine the data for Canadian and US people together, the total comes to 801,500 passengers. This roughly translates to North American passengers accounting for 56% of the connecting traffic that transited via Iceland in 2017 (more detail below).

Copenhagen tops European ranking, however London is really number one

Based on OAG Traffic Analyser data for 2017, it shows that just under 1.34 million passengers travelled indirectly between North America and Europe via Iceland, with the number of passengers transiting via Reykjavik/Keflavik growing by 30% versus the levels encountered in 2016.

With many US airports having secured new Icelandic carrier services during the past few weeks, anna.aero has decided to analyse what traffic trends these airports could experience into Europe. The table below highlights the top 15 destinations in Europe for US-originating passengers that transited via Reykjavik/Keflavik in 2017. Those that are highlighted in light green are served by both Icelandair and WOW air this summer, while those in dark green have only Icelandair as a serving carrier. 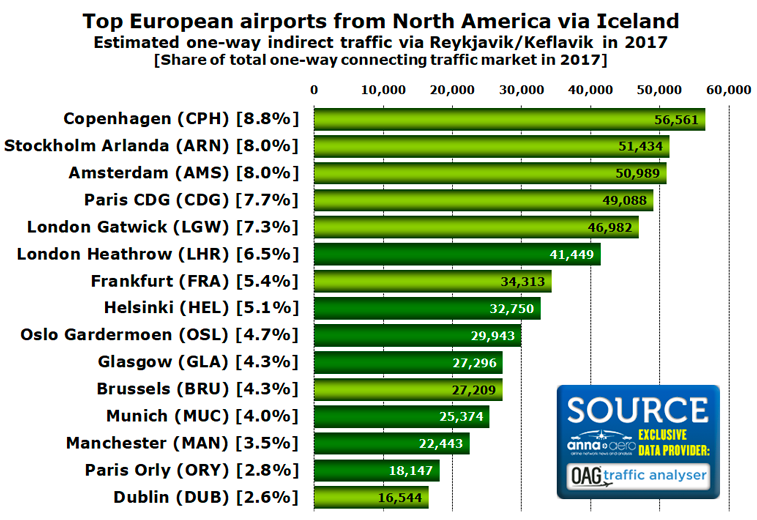 While Copenhagen is currently the number one airport for passengers from North America, it should be pointed out that if data for London’s Heathrow and Gatwick airports was combined, it would become the leading destination with just over 88,400 one-way passengers in 2017. If the same was done for Paris, combining CDG and Orly’s numbers, its traffic would increase to 67,200 passengers in 2017, making it the second-biggest market. North American Traffic via Iceland to London grew by 23% last year, with this number likely to grow again in 2018, with WOW air now serving London Stansted as of 25 April.

Along with the destinations in the table above, other honourable mentions as final European points last year include Zurich (15,360 one-way passengers; 16th most popular destination), Hamburg (13,400; 17th) and Edinburgh (13,000; 18th).

Could Atlanta be next?

With it being the world’s busiest airport, Atlanta is presently the number one North American airport without a link to Iceland. While the Georgia State airport itself acts as a major hub, O&D demand between it and Reykjavik/Keflavik reached 5,400 passengers last year, up 83% from the 2,950 indirect passengers that travelled between the two points in 2016. The number one connection point between Atlanta and Iceland’s busiest airport is New York JFK, capturing 54% of the transfer market. But, with Atlanta having 18 transatlantic routes in 2018, it could be tough competition for Icelandic carriers trying to get a sizeable amount of transfer traffic via Reykjavik/Keflavik. Along with Atlanta, anna.aero has identified the top 20 airports in North America which presently do not have a Icelandic service, with it also highlighting the number of non-stop transatlantic services which each airport has in 2018. Note that airports which are highlighted in light green are within a city which has another airport that offers flights to Iceland. 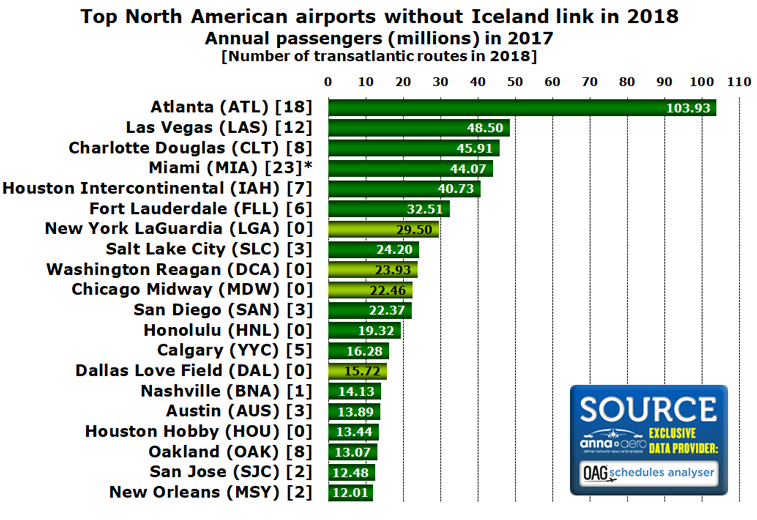 Taking airports which are within a city that already has an Icelandic link out of the equation, anna.aero can confirm that the number one North American airport without a route to Iceland, and indeed Europe, is Honolulu. With 9,770 kilometres distancing the Hawaii airport and Reykjavik/Keflavik, it would be a sector over 2,000 kilometres longer than WOW air’s planned route to Delhi from Iceland which launches later this year. But with 130,900 indirect travellers between the US airport and Europe in 2017 according to OAG Traffic Analsyer data, it could be a promising route for the airline, particularly given that the top destinations from Europe, namely London, Frankfurt, Paris, Zurich and Amsterdam, are all flown to by the LCC. Outside of the top 20 mentioned above, other notable mentions in the US that do not have an route to Iceland are Raleigh-Durham, Sacramento, Indianapolis and Columbus, with the latter identified by anna.aero as the leading unserved market from mainland North America. 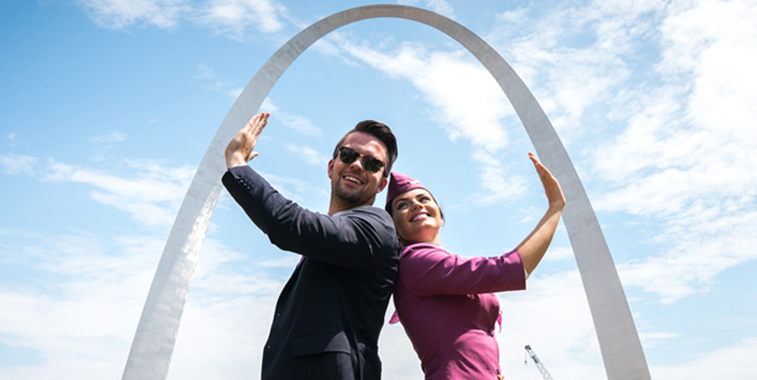 WOW air introduced St. Louis to its network on 17 May, a route that the carrier will operate four times weekly until 3 June when a fifth weekly rotation will be added to the schedule. This is St. Louis’ first transatlantic route since 2003, with Iceland playing a more pivotal role in connecting secondary North American cities with seamless connections onto Europe. Other airports to gain Iceland routes this summer include Cincinnati, Cleveland, Detroit and Kansas City.