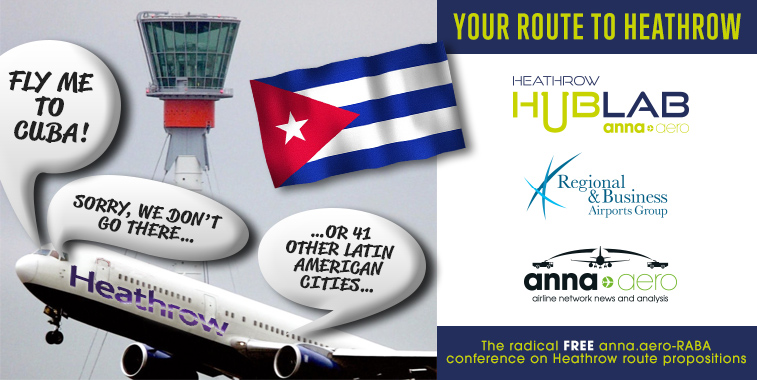 Heathrow Expansion, including a third runway, will create the capacity for dozens of new routes, including a potential 40 new long-haul services, and a potential doubling of domestic links. Find out how at the FREE Heathrow Connectivity Conference.

London Heathrow is connected to fewer Latin American country markets and individual destinations than all of the other major European hubs. That’s the conclusion we make in this analysis of which airports are missing from Heathrow’s route network in the lead-up to the anna.aero-RABA Heathrow HubLAB Conference in London on 12 June.

This FREE event is an important opportunity for airports to find out more about airline plans to provide new services from an expanded Heathrow. The Star Presentation will be made by easyJet’s Group Director of Strategy & Network Robert Carey, who will explain the plans for a Heathrow easyJet base.The much-needed feed created by such a base will be highly important to Heathrow’s long-haul airlines.

41 airports/25 countries with no Heathrow flights

Indeed a key benefit of Heathrow Expansion, including a third runway, is to make extra capacity available for new routes to underserved markets. This analysis reveals there are 25 countries and 41 airports across Central and South America, plus the Caribbean, with links to other major European hubs, but no connections to London Heathrow in S18. It also identifies the 12 airports in the region with the most capacity form other competing European hubs, but no direct Heathrow services. (This analysis uses data from countries based on OAG’s classification of Latin America which includes: the Caribbean, Central America, Upper South America and Lower South America).

To compare Heathrow to the other European mega hubs we normally look at the ‘FLAPI’ airports of Frankfurt, London Heathrow, Amsterdam, Paris CDG and Istanbul Atatürk. But since Madrid is the sixth largest airport in Europe, and a major origin point for Latin America traffic, it was decided to also include the Spanish hub in this analysis, with the new grouping therefore becoming the FLAPIM airports.

The table below shows how the FLAPIM airports compare in terms of connections and S18 capacity to Latin America, along with their capacity growth since S08. The data includes any countries or routes with at least one scheduled flight this summer, although the vast majority of routes are more regular services. Heathrow is connected to six Latin American countries and seven destinations. It is the largest FLAPIM origin airport for just one of these destinations, Nassau, Bahamas.

Heathrow is connected to fewer Latin Amercian country markets and individual destinations than all of the other FLAPIM hubs with the exception of Istanbul Atatürk. Madrid is the leading origin point with 18 countries and 29 airports served this summer, followed by CDG with 14 countries and 22 airports, leaving Heathrow in a distant  fifth-place. Indeed, even it you discounted half a dozen very low-frequency routes offered by Frankfurt and CDG, these competitors would still be ahead with more connections than Heathrow. Furthermore, in volume terms, CDG and Amsterdam will both offer more than twice as many one-way seats to Latin America than Heathrow this summer, while Madrid is way out in front of the London hub with 506% more seats available. Iberia serves 16 of the 29 Latin American destinations available from Madrid this summer. The Spanish national airline is part of International Airlines Group (IAG) along with Heathrow’s dominant carrier, British Airways. It is possible that this has had an influence on Heathrow’s Latin American links, with IAG possibly more focused on its North American services from Heathrow, while driving Latin American traffic through Madrid. IAG is ironically an opponent of the Heathrow Expansion plan, claiming it is too costly; more likely it just doesn’t see the benefits of 50% more slots bringing lots of fresh competition to dilute its dominance.

Heathrow witnessed stronger percentage growth than the other FLAPIM hubs in terms of departing Latin American capacity from S08 to S18, but this was from a smaller base. When the net increase in seats over this period is compared, Heathrow saw the third highest level of growth, behind that of Madrid and Amsterdam.

In total, there are 25 Latin American countries and 41 airports with services to at least one FLAPIM hub, but no connections to Heathrow in S18 and the table below lists the top 12 unserved destinations. The largest of these is Havana which is already served from Amsterdam, CDG, Frankfurt, Atatürk and Madrid. Five of the top 12 airports are in South America with four located in the Caribbean and three in Central America. Nine of the airports already have links to more than one FLAPIM hub. Ten of the top airports listed serve capitals.

HubLAB, the Heathrow Connectivity Conference, takes place at the Heathrow-hosted British-Irish Airports EXPO at London Olympia 12-13 June 2018 (154 exhibitors, 3,000 visitors). This FREE OF CHARGE event – which also comprises RABA’s Annual Conference – is an important opportunity for airports to find out more about airline plans to provide new services from an expanded Heathrow. 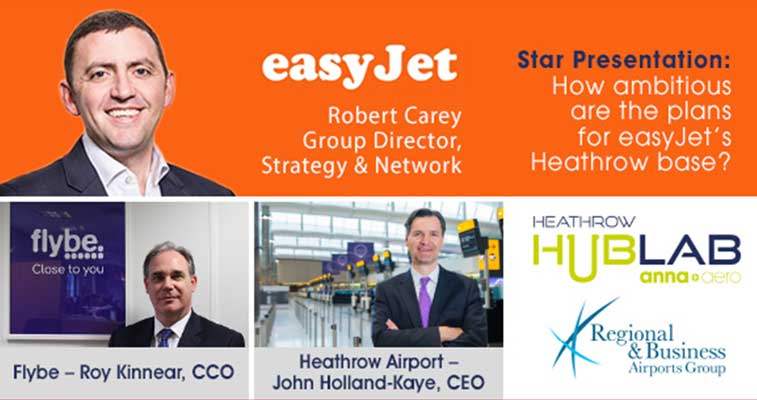 Airlines and airports accepting the chance to present business propositions for new routes to Heathrow include: