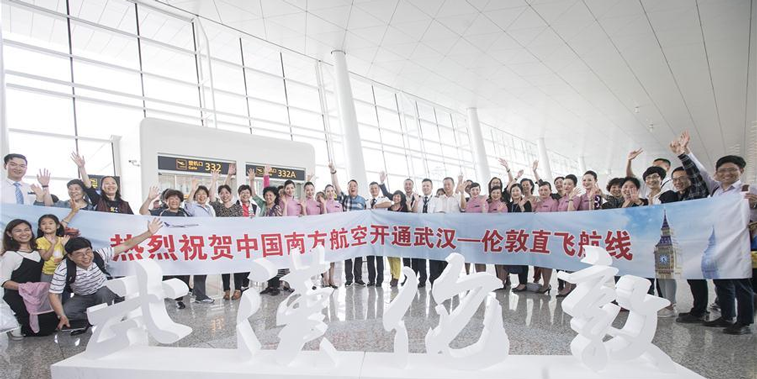 China Southern Airlines launched flights between Wuhan and London Heathrow on 30 May, a route that will operate three times weekly using A330-200s. This is the airline’s second route to Heathrow after Guangzhou. Wuhan is currently the SkyTeam member’s fifth largest hub, with the carrier upping capacity at the airport by 6.8% this year.

China Southern Airlines is China’s largest carrier, and overall it is the sixth biggest airline in the world with regards to seat capacity. Offering 120.72 million one-way seats in 2017, it sits just behind Ryanair (135.24 million one-way seats in 2017), but ahead of China Eastern Airlines (115.22 million) in the global rankings. As an airline, it is currently operating 542 commercial aircraft (includes units leased to other operators), but with over 280 still on the order books, the airline is certainly staying in expansion mode. Since 2008, China Southern has increased its annual traffic by 117%, growing from 58.24 million passengers a decade ago to 126.30 million last year, and the airline’s latest statistics show that the growth rate is not only being maintained, but is starting to accelerate.

Traffic up in Q1

Between January and March, China Southern flew 33.25 million passengers, up 9.8% versus the 30.29 million that it flew during the same quarter of 2017. Last year the SkyTeam member flew 126.30 million people, representing an increase in traffic, when compared to 2016, of over 10%. That means 2017 was the first year since 2010 in which China Southern has posted a double-digit growth in passenger numbers. If the carrier is able to maintain its 9.8% growth rate from Q1 for the remainder of 2018, then the airline can expect to carry around 138.68 million passengers for the calendar year. 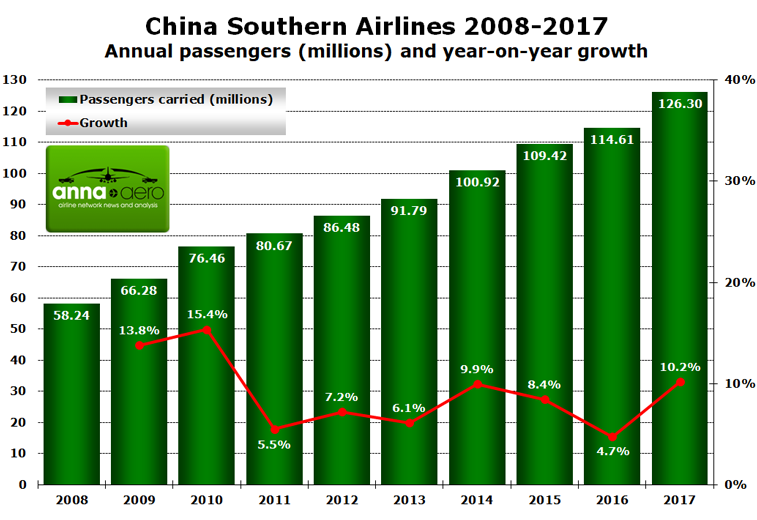 Breaking down last year’s data into geographic categories, it was the domestic sector which welcomed the most traffic, with 86% of customers (108.62 million) flying on inter-Chinese flights in 2017. The remaining 14% of passengers (17.68 million) flew internationally with the carrier, with this also taking into account flights to Hong Kong, Macau and Taiwan. Last year domestic passenger traffic grew by over 10%, while the international market advanced at a rate of 9.5% when compared to the totals of 2016. For Q1 2018, domestic traffic rose by 9.4%, whereas the international sector encountered 12% growth.

Guangzhou is by far the airline’s leading hub, with it operating 39.76 million seats to and from the airport serving the capital of Guangdong Province in 2018. The carrier has increased its seat capacity output at Guangzhou by 3.8% this year when compared to 2017, with it growing faster than the airline’s second largest hub in Beijing. Despite the capacity limitations at China’s leading airport, China Southern has still managed to increase its seat offering there by 3.5% this year. While both of these airports are still way out in front, in terms of operational size, with regards to growth they were the worst performing of all those in the top 12. The best airport was the airline’s eighth largest hub – Shenyang – with its seat capacity growing by over 13% at the airport serving the capital of Liaoning Province. 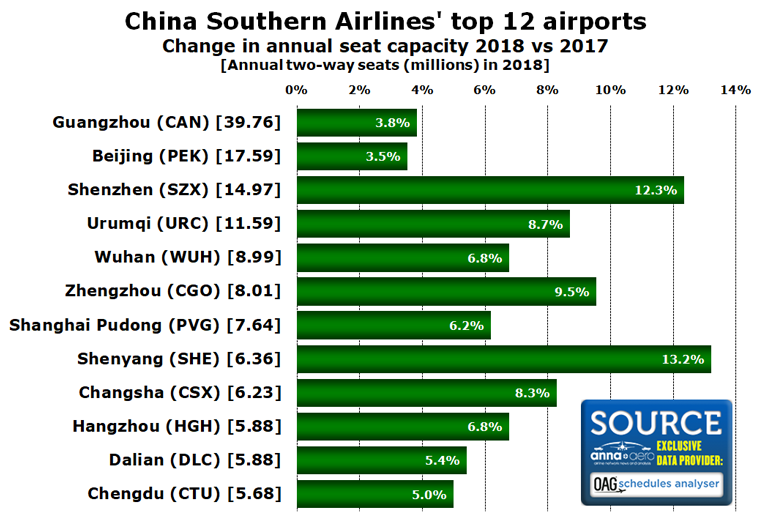 While Shenyang is reporting the best capacity increase this year in terms of percentage growth, Shenzhen is the leading airport within the top 12 pack in regards to net seat expansion. The airline’s third largest hub will see 1.64 million additional seats in 2018, with the second best airport for net growth being China Southern’s leading hub – Guangzhou – where 1.64 million seats are being added.

The Vietnamese market appears to be a key focus for China Southern in 2018, with it increasing its seat capacity to that nation by 26% this year. As a result of this, Vietnam has overtaken Australia to become China Southern’s fourth biggest international market, with it now very close in size to the Japan market. This summer the carrier is offering schedule service to five destinations in Vietnam on a total of 11 routes. This compares to four destinations and eight routes in S17. The new destination which joined the network was Da Nang, with China Southern connecting to the coastal city from Beihai on 22 November 2017, a route that originates in Zhengzhou. As of 1 June the airline will also connect to the city from its leading hub at Guangzhou. Along with these services, the airline has also introduced a scheduled connection between Shenzhen and Hanoi during the past 12 months, adding to its existing Guangzhou and Changsha routes from the North Vietnam airport. 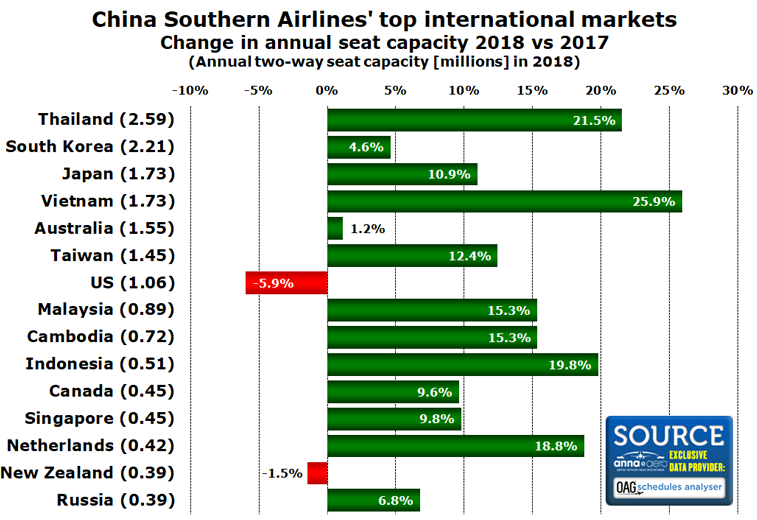 Of the top 15 nations listed in the graph above, only two have encountered capacity cuts this year with China Southern. The US is reporting a 5.9% drop in seats, while New Zealand is posting a 1.5% cut.

Along with those listed in the graph, other nations are posting strong capacity increases with China Southern this year, with one standout being India (19th largest market) where seat availability has risen by 24% in 2018. This is due to the airline upping the size of its equipment on its twice-daily link from a mixture of 737s and A330s to an all-A330 operation. In total China Southern is operating to 40 international markets this year according to OAG schedules. 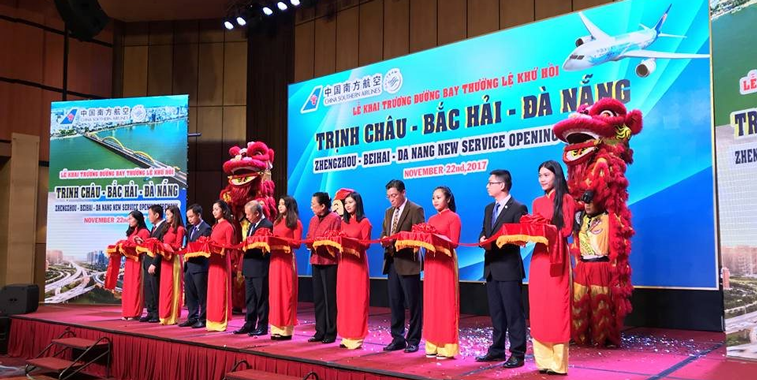 China Southern Airlines launched flights on a tri-city route between Zhengzhou, Beihai and Da Nang on 22 November, with the latter airport becoming the airline’s fifth scheduled destination in Vietnam. The nation appears to be a key focus market for China Southern in 2018, with it upping its seat capacity to Vietnam by nearly 26% this year versus 2017.