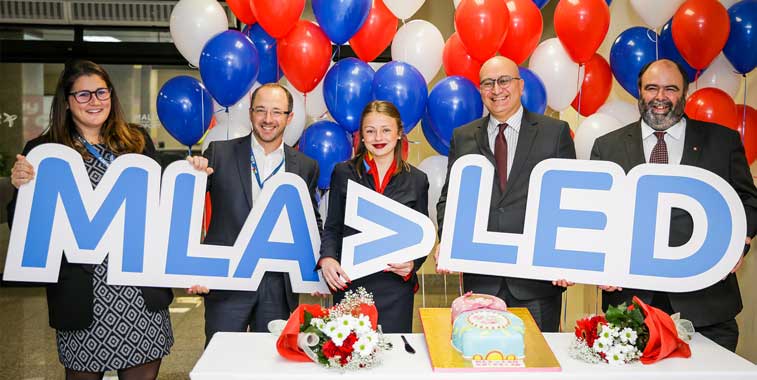 Malta Airport has enjoyed eight back-to-back years of growth and expects to welcome up to 6.5 million passengers in 2018, with a number of new routes having already launched this year. On 28 March, Air Malta began a twice-weekly connection to St. Petersburg. It operates the 2,893-kilometre sector with its A320 fleet.

There is only one commercial airport in the Maltese islands. Malta Airport has seen significant growth in recent years, with passenger numbers increasing from 3.11 million in 2008 to 6.01 million in 2017. During that period, the airport has only seen one year-on-year decline in passenger numbers. This took place at the height of the global economic downturn in 2009, when traffic dropped by 6.1% to 2.92 million passengers. Since then, Malta hasn’t looked back with a robust return to growth in 2010, followed by a further seven consecutive years of annual traffic increases. From 2009 to 2017 the airport’s passenger numbers more than doubled and it enjoyed an annual average growth rate of 9.5%. This period included four double-digit percentage increases in 2010, 2013, 2016 and 2017. The largest single year-on-year increase in passengers was experienced in 2017, with numbers increasing by 17.5% compared to 2016. 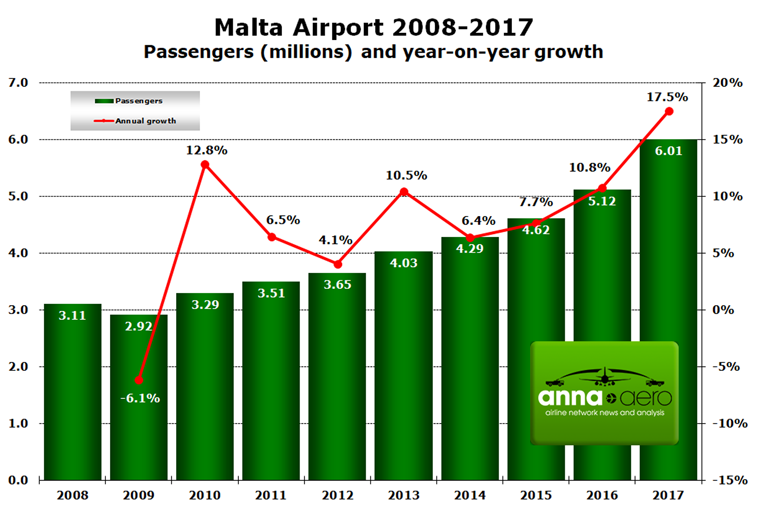 Malta is confident that its recent growth is set to continue. “2018 is forecast to close with around 6.5 million passengers and promises to be another exciting chapter in the airport’s success story,” explains Alan Borg, CEO, Malta Airport. “This is expected to be largely driven by a flight schedule offering more than 100 destinations, including 20 new routes that establish links with countries such as Estonia, restore the island’s connection with Portugal, and strengthen ties with already popular markets such as Italy and Spain.”

An analysis of schedule data for a typical peak week in S18 (week commencing 31 July), reveals that 30 different airlines will offer at least one scheduled service from Malta. The country’s national carrier Air Malta is the largest capacity provider just ahead of Ryanair. Between them, these two carriers will account for 62% of the airport’s departing weekly seats. Air Malta will operate 185 weekly flights across 36 destinations, while the Irish ULCC will offer 52 destinations spread over 154 departures. The top 12 carriers include five LCCs and seven full-service airlines. Three of the top-ranked carriers are UK-based operators, while Emirates is the only non-European airline operating to Malta during the week in question. 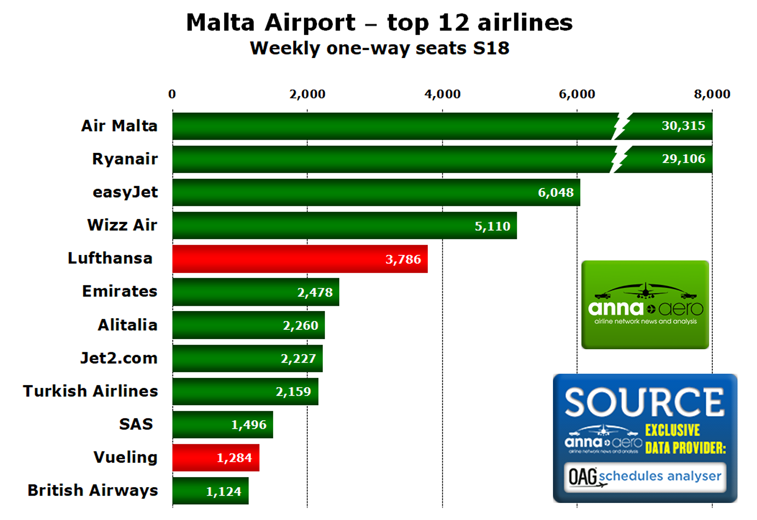 Most of the top 12 carriers have increased their weekly summer seat offering from Malta this year, compared to the equivalent period in S17. Alitalia has deployed the largest increase in capacity, doubling its weekly seats, while Jet2.com and British Airways boosted seat numbers by 65% and 40% respectively. Lufthansa and Vueling (highlighted in red) were the only top-ranked airlines to cut capacity, with 10% and 12% reductions respectively. Emirates was the only top 12 airline to maintain exactly the same weekly capacity in S18 that it deployed in S17. The Dubai-based operator offers daily departures to its home hub via Larnaca in Cyprus. Condor and Thomas Cook Airlines made the top 12 last summer but have dropped out this year, being replaced by Alitalia and BA. Ryanair offered the most weekly seats in S17 but has been overtaken by Air Malta this year, with the Maltese national carrier increasing seat numbers by 27.2% while the ULCC only upped its seat count by 6.9%.

Italy and the UK will dominate the peak summer schedule from Malta this year with an almost identical number of weekly seats available to both countries. In total, services to Italy and the UK will account for 45% of the airports’s weekly summer seats in 2018. The biggest single route from Malta during the week commencing 31 July is Rome Fiumicino, with nearly 6,000 seats available to the Italian capital city airport. The Fiumicino sector is operated by three carriers; Air Malta, Alitalia and Ryanair. The former offers the highest frequency service with double-daily flights, and between them the three airlines offer 33 weekly flights on this airport pair. The largest single destination in the UK is London Gatwick, which is served by five different carriers providing 27 weekly frequencies combined. Larnaca appears in the top 12 since it is served by Emirates. It should be noted that the capacity figure indicated for Larnaca may not all be available for flights to the Cypriot destination, since a proportion of these seats will be booked for onward travel to Dubai. 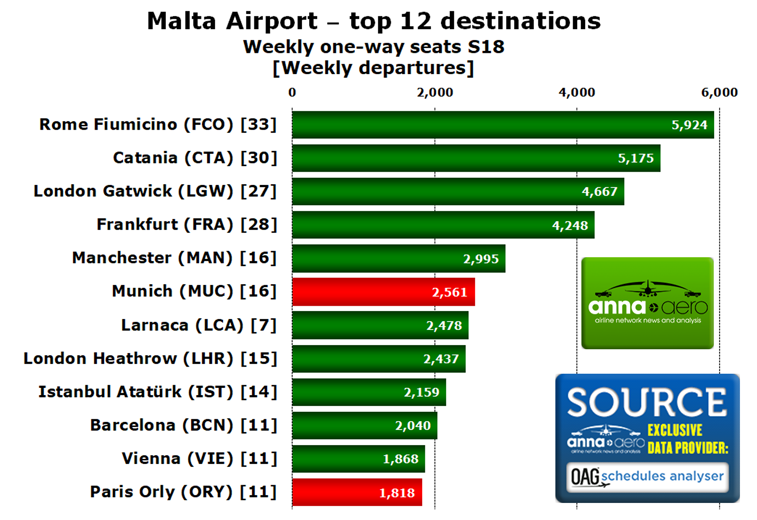 Ten of the top-ranked destinations experienced an increase in capacity this summer. The largest increases came on flights to Barcelona (40% up versus S17) and Catania (35% rise). Barcelona benefited from Ryanair introducing four times weekly flights, while Catania has seen an increase in Air Malta frequencies. Munich and Paris Orly (highlighted in red) were the only top 12 destinations to see capacity cuts from Malta this summer, with 15.6% and 8.9% seat reductions respectively. Brussels and Zurich have both dropped out of the top 12 route list and have been replaced by Barcelona and Vienna.

According to anna.aero’s New Routes Database, airlines have already launched 26 new services to or from Malta this year and at least another five are scheduled to start before the end of 2018. This includes 12 new services from Air Malta and 11 from Ryanair.

“Our top priority for the traffic development team remains to position Malta as a year-round destination,” explains Alex Cardona, Head of Traffic Development and Customer Services, Malta Airport. “This has led led to record growth in the shoulder months, with the past three years registering an average increase of 14.7% in the off-peak period. Looking ahead, we are optimistic that the developments we have lined up will enable us to continue on this upward trend. These include Finnair’s first ever extension of its schedule to Helsinki into the winter season and Norwegian’s increase in capacity on the Copenhagen route later on this year. These two developments not only reward our efforts to address seasonality, but also augur well for our strategy to develop the Scandinavian market further.” 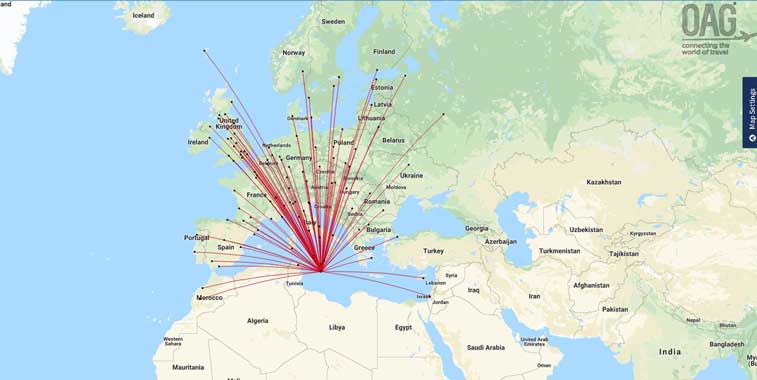 Malta’s route map for the week commencing 31 July demonstrates that the vast majority of the airport’s connections are to Europe, with the exception of several destinations in North Africa and the Middle East. Italy and the UK are the largest destination markets this summer, accounting for 45% of the airport’s departing seats during the week commencing 31 July.