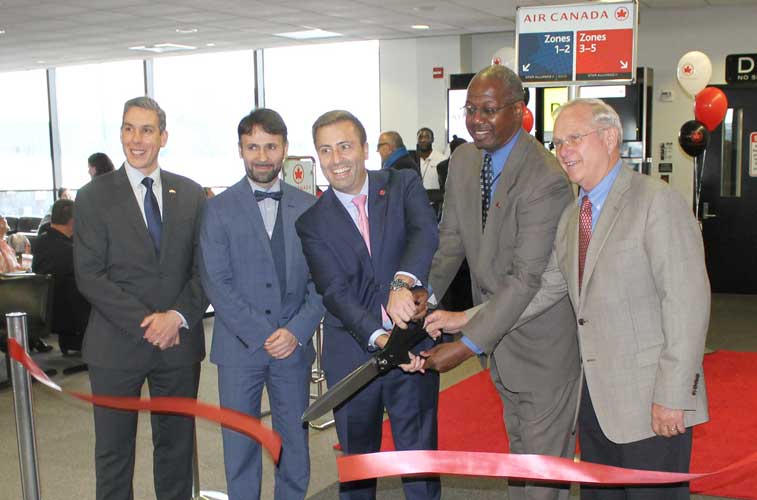 Air Canada is the dominant airline in the US-Canada market, accounting for 46% of available weekly seats in S18. On 17 May the Canadian carrier launched services from Montreal to Baltimore/Washington. Seen taking part in the ribbon cutting are: Frédéric Tremblay, Director of the Quebec Government Office in Washington; Frank Stendardo, Transport Counsellor, Embassy of Canada to the US; Vincent Gauthier-Dore, Director of US Business Development, Air Canada; Ricky Smith, Executive Director, Baltimore/Washington Airport; and Calvin Peacock, Maryland Aviation Commission.

The US and Canada share a large border and one of the most mature country pair markets for international air services. From 2008 to 2017 the two-way capacity available between these North American neighbours grew from 31.68 million seats to 37.15 million, representing an increase of 17.3%. The market witnessed the almost obligatory decline in capacity at the height of the global economic downturn in 2009, with seat numbers dropping by 4.8% compared to 2008 levels, but since then it has enjoyed eight consecutive years of steady growth. From 2009 to 2017 capacity grew by 23.2% with an average annual growth rate of 2.7% during this period. The largest single annual increases were experienced in 2012 and 2017, when seat numbers grew by 4.7% and 4.0% respectively. 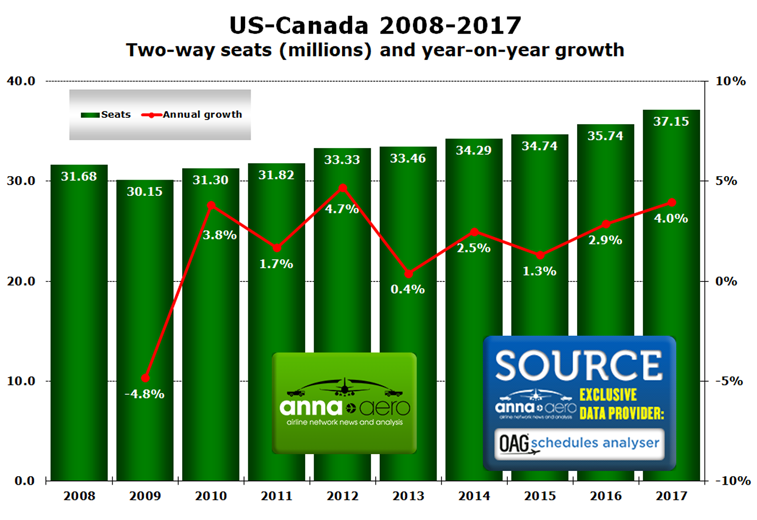 The average capacity on trans-border services between the US and Canada has increased from 78 seats per flight in 2008 to 96 seats per departure in 2017. The proportion of overall capacity provided by narrow-body aircraft over this period remained unchanged at 44%. However, a recent interesting trend has seen the proportion of seats flown by wide-body types increase from just 2.1% in 2013 to 10.1% last year. The main driver of this has been an increase in wide-body operations by Air Canada, in large part due to the introduction of 767-300-operated services by its low-cost subsidiary Air Canada Rouge. In total, the capacity available on Air Canada wide-body services (including its LCC subsidiary) between the US and Canada increased from 375,000 seats in 2013 to more than 3.26 million in 2017. Air Canada Rouge 767-300s have been deployed on a number of routes including Montreal-Fort Lauderdale, Toronto Pearson–Orlando and Pearson-Las Vegas, and operated 2.44 million seats in the US-Canada market last year.

To summarise the market in more detail, anna.aero analysed schedule data for a typical peak week in S18, in this case the week commencing 31 July. According to OAG, 13 airlines will offer at least one service between the US and Canada during the week in question. The top 12, based on weekly seats this summer, include five Canadian carriers, five US-based operators and two non-native airlines. Air Canada is by far the largest operator in the market offering more seats than the US Big Three (USB3) carriers plus Alaska Airlines combined. The Canadian flag carrier (including its regional and LCC operations) will account for 46% of the weekly seats available in this market alone. The largest US operator in the trans-border market is Delta Air Lines. Cathay Pacific Airways and Philippine Airlines both feature in the top 12, with each carrier offering seats between New York JFK and Vancouver under fifth freedom rights, as part of itineraries that start and finish at their respective home hubs of Hong Kong and Manila. 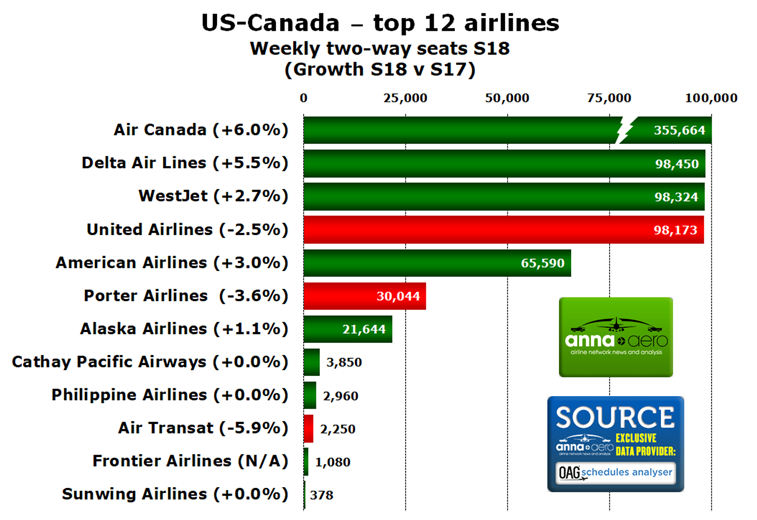 Five of the top-ranked airlines have increased their weekly capacity in the US-Canada market for S18, compared to the equivalent week in 2017. The strongest growth has come from Air Canada and Delta with their respective weekly seat numbers up 6.0% and 5.5%. Cathay Pacific, Philippine Airlines and Sunwing Airlines have maintained the same capacity as last year while another three of the top 12 carriers (highlighted in red) have cut seat numbers this summer, with Air Transat seeing the biggest decline at 5.9%. Frontier Airlines is a new addition to the market for S18, with the ULCC having introduced a three times weekly service between Denver and Calgary on 31 May.

The top 12 airports for departing weekly seats in the US-Canada market this summer include five in Canada and seven in the US. The top four departure points are all in Canada. Pearson is the largest, accounting for 21% of the weekly departing seats in this market alone in peak S18. Seven airlines will offer a combined 1,730 departures from Pearson to 52 US airports. Toronto and New York are each represented by two different airports in the top 12. The largest US origin point for Canadian capacity is Los Angeles. There are a number of significant US hubs missing from the top 12 including Atlanta, the world’s busiest airport, Houston Intercontinental, JFK and Dallas/Fort Worth. 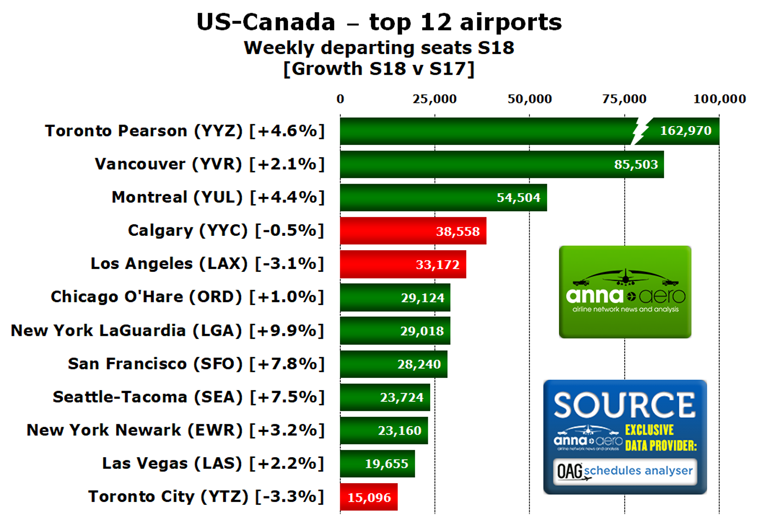 Most of the busiest airports for US-Canada capacity witnessed an increase in their weekly trans-border seats for S18. The largest growth has been experienced at New York LaGuardia (9.9% up versus S17), San Francisco (7.8%) and Seattle-Tacoma (7.5%). Three facilities (highlighted in red) have seen marginal reductions. Toronto City experienced the largest reduction in weekly seats (3.3% down) due to a marginal cut in flights made by Porter Airlines. The top 12 is occupied by the same airports as in S17, with the only change in ranking position being Seattle overtaking New York Newark for ninth place.

Toronto and Vancouver are dominant destinations

All but one of the top 12 routes from the US to Canada in peak S18 serve the cities of Toronto or Vancouver. Toronto is the destination city for seven of the top-ranked routes, including the three largest airport pairs. Six of these route operate to Pearson with one arriving at City. Between them, the seven Toronto connections account for 62% of the weekly one-way seats available on the top 12 routes. The largest airport pair in the market this summer is the connection between LaGuardia and Pearson which will be served by three airlines offering 163 weekly flights. The only connection that doesn’t operate to Toronto or Vancouver is the Newark service to Montreal. LaGuardia, Chicago O’Hare, Los Angeles and San Francisco all feature twice as origin airports among the top 12 routes this summer. 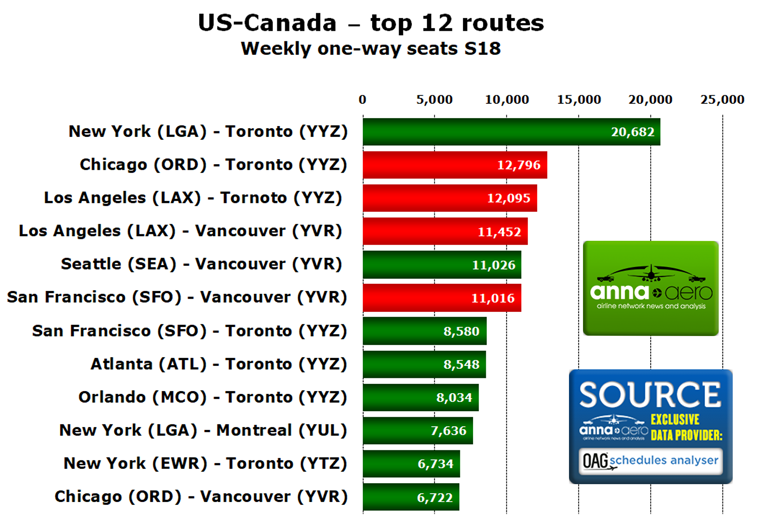 Eight of the top-ranked routes (highlighted in green) witnessed an increase in capacity for this summer, compared to the equivalent week in S17. The largest growth was experienced on services from Atlanta to Pearson (20.5% increase in weekly seats) and from O’Hare to Vancouver (20% increase). Four of the top 12 airport pairs (highlighted in red) have seen a decline in capacity with the largest cuts coming between Los Angeles and Vancouver (10.3% down).

The positive growth of recent years looks set to continue. According to anna.aero’s New Routes Database, airlines have already launched 13 new routes between the US and Canada in 2018 including seven with Air Canada or Air Canada Rouge. Another is scheduled to start in W18/19 when Air Canada Rouge launches flights between Edmonton and Las Vegas. 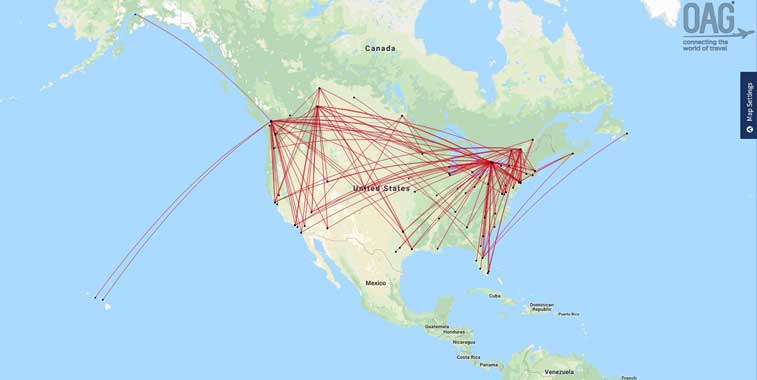 The US-Canada market has enjoyed eight consecutive years of steady growth, with 37.15 million two-way seats available between the North American neighbours in 2017. Toronto is the largest origin airport for these trans-border links but the route map shows that facilities as far afield as Alaska, Hawaii and St John’s are also connected.