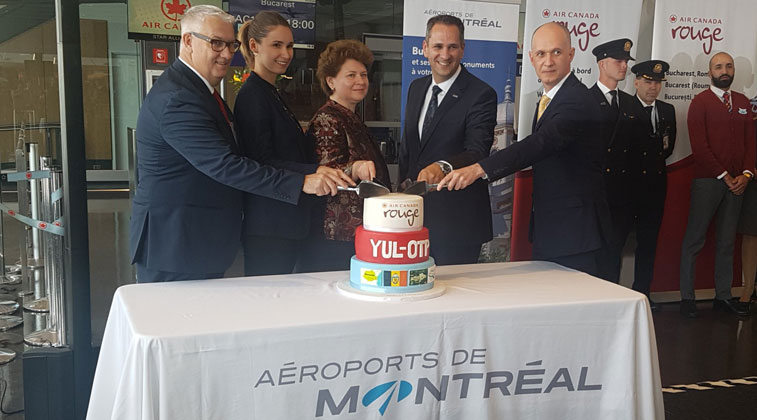 Air Canada Rouge commenced flights between Montreal and Bucharest on 7 June, with this becoming the only route between North America and the Romanian capital, while a second service from Toronto Pearson launched on 9 June. To toast the occasion, a cake was made to commemorate the historic route launch. Among those cutting the colourful route launch party piece were: Duncan Bureau, President, Air Canada Rouge; Adina Georgescu, President of the Romanian Chamber of Commerce of Quebec; Ioana Gabriela Costache, Consul General of Romania in Montreal; Stéphane Lapierre, VP Airport Operations and Air Services Development; and Adrian Ligor, Business Manager of the Romanian Embassy in Canada. The carrier will offer twice-weekly flights from both Montreal and Toronto Pearson to Bucharest. Air Canada Rouge commenced operations between Toronto Pearson and Porto on 8 June, with the inaugural flight touching down in the Portugese city the following day. Among the celebrations in Porto was a cake and ribbon cutting ceremony. Air Canada Rouge will offer three weekly flights on the 5,641-kilometre transatlantic city pair.