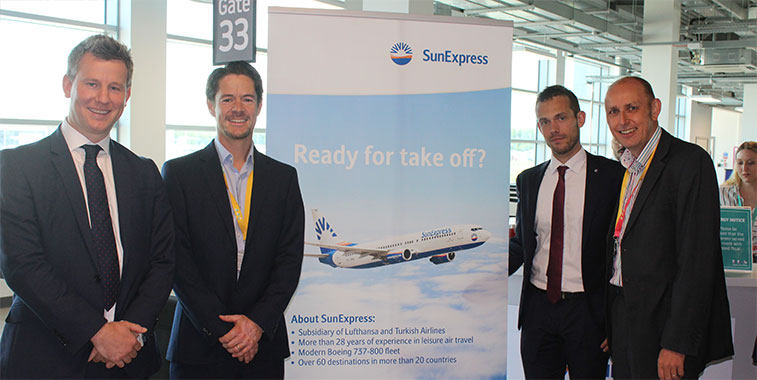 Jonathan Pollard, CCO and Simon Harley, Head of Business Development, both from London Luton Airport hosted SunExpress’ Head of Network Planning and Scheduling, Wilken Bellmann and anna.aero’s Editor Marc Watkins on 15 June to welcome the start of the airline’s four new routes from the London airport – namely Ankara, Antalya, Bodrum and Gaziantep. As a result of its expansion, the airline has grown from offering 80 flights during last summer to 300 in S18 from Luton.

Celebrations were held on 15 June at London Luton as SunExpress launched its first flight to Antalya. The Turkish city is the first of four new destinations which the airline is launching this month, with the remainder being Bodrum (18 June), Ankara (17 June) and Gaziantep (20 June). SunExpress continues to offer twice-weekly flights to Izmir, as it has done for the past three years. The flights to Ankara and Gaziantep are the only direct flights to operate to these destinations from the UK.

Jonathan Pollard, CCO for Luton said: “We have worked closely with SunExpress since they joined us as a partner three years ago and it is fitting they have chosen the year of our 80th anniversary to increase the number of destinations offered from Luton. Our collaboration with SunExpress comes as we near the end of our £160m redevelopment programme, and we are looking forward to continuing our work with them during this exciting time for LLA.”

Wilken Bellmann, Head of Network Planning and Scheduling for SunExpress said: “I was delighted to be at Luton today to see the first passengers off to Antalya. We are extremely happy to have been able to launch so many new routes from the UK in 2018, and very pleased that Turkey is back on the map for British tourists. Our flights to Ankara and Gaziantep will undoubtedly make it much easier for the local Turkish community to visit family and friends.” He added: “It was also a great opportunity for me to see the transformation which has taken place at Luton. I am sure that our passengers will be very pleasantly surprised when they see the changes.” 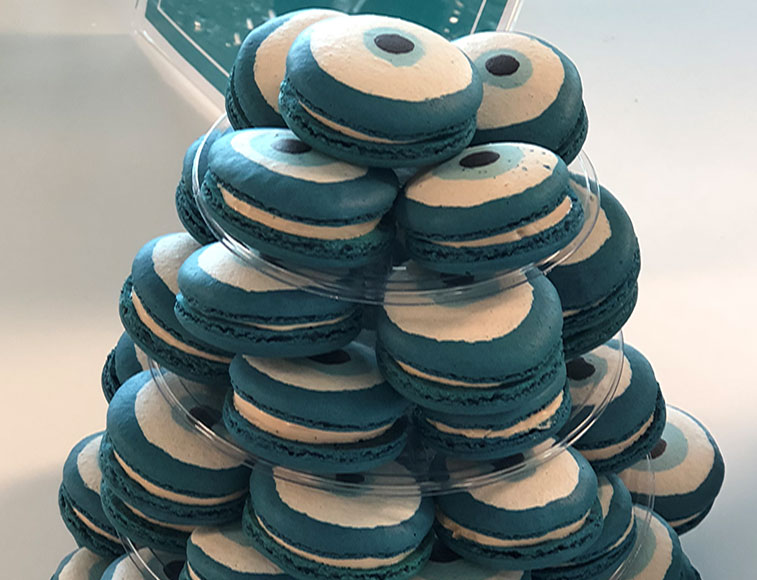 Passengers and assembled guests were treated to an assortment of soft drinks and evil eye macaroons at Gate 33 from where the Antalya flight was due to depart at 11:30. anna.aero’s Watkins can confirm that the macarons were indeed evil, as they turned your tongue blue! It didn’t stop him from having two however. 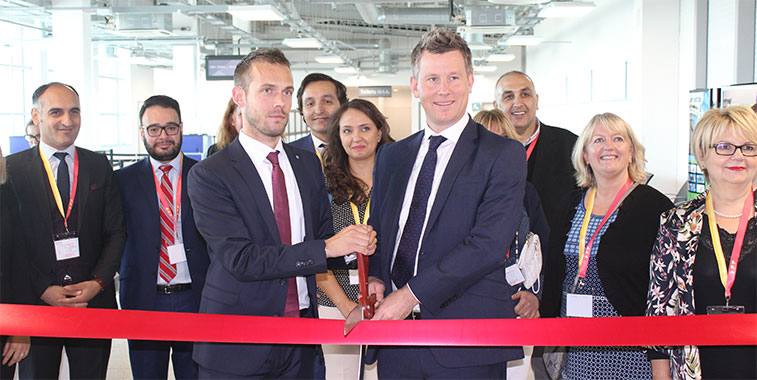 Wielding the scissors to snip the first flight ribbon were SunExpress’ Bellmann and Luton’s Pollard, observed by the assembled VIPs and guests invited for the event. Don’t worry guys we won’t mention the time that you missed the ribbon altogether. Better launch some more routes together so you can get it right next time! 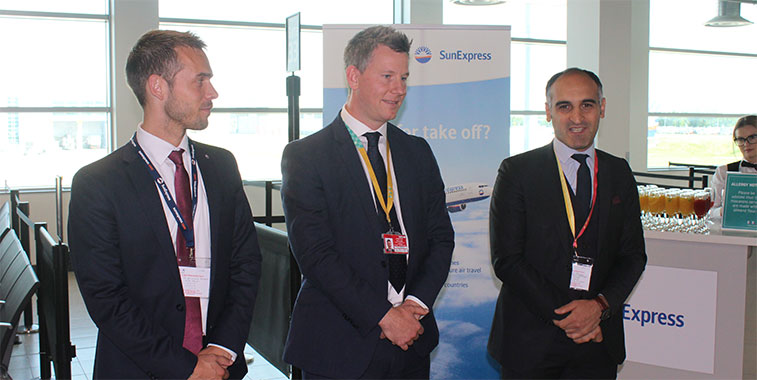 With passengers having a (non-alcoholic) tipple and a macaron, it was time for the formal part of the event – the speeches. SunExpress’ Bellmann and Luton’s Pollard were joined by Taner Beyoglu, Director from the Turkish Office of the Counsellor for Culture and Information. “We are delighted to see four new routes start this summer with SunExpress,” enthused Pollard. “We know the airline had lots of success with its initial Izmir route, so its great to see them showing their confidence in us by expanding further. SunExpress’ expansion at Luton comes at a good time for us, in our 80th anniversary year and as our greatly improved terminal facilities continue to open.” The London Luton Dream Team. If you want your airline to be the next tailfin to grace the apron at the London airport, these are the guys to talk to –Simon Harley, Head of Business Development and Jonathan Pollard, CCO. Once the flight arrived – with surprisingly around 100 passengers on board (bearing in mind there had been no outbound flight) – six minutes earlier than the scheduled time of 10:40, the VIPs and guests went onto the apron to meet the first flight crew for further photo opportunities, including posing with the obligatory Turkish flag. 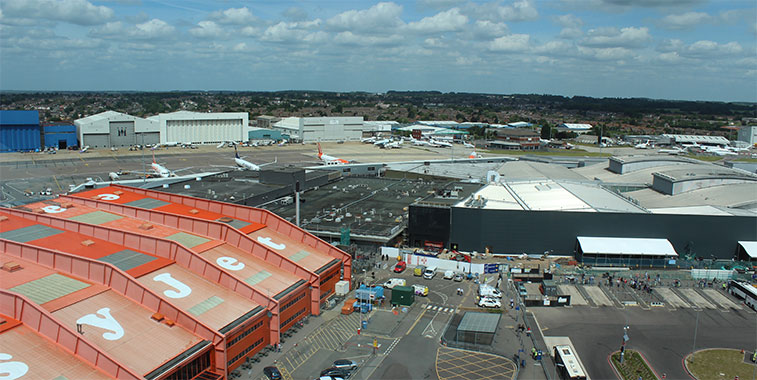 After the first flight festivities had concluded in the terminal, Harley invited Watkins and Bellman up to the top of Luton’s tower to get a view of the airport’s ongoing £160m redevelopment. While the hoardings are tending to come down rather than go up these days, there is still plenty of work in progress on the airport’s slowly transforming frontage. As flight XQ531 had not left, we received an unexpected treat when we reached the top of the tower – a bird’s eye view of the planned Fire Truck Water Arch, which is surely the best vantage point on the airport! See here how the airport does in this week’s Arch of Triumph competition. 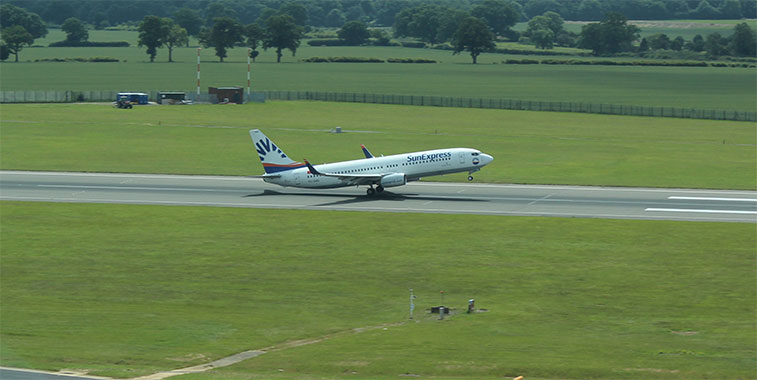 A little behind schedule – thanks to the busy airspace around London – the first flight of SunExpress’ expanded Luton S18 programme to Antalya departs. The first flight was 100% full (in fact there were 194 people on board the 189-seat aircraft, thanks to the several infants on the aircraft). Depending on the success of this initial season, Bellman informed anna.aero that next year the airline intends to increase the length of its flying programme to the four destinations. And finally, thanks to Joanna Marsh, Simon Harley, Jonathan Pollard and NATS staff for their help with this event.