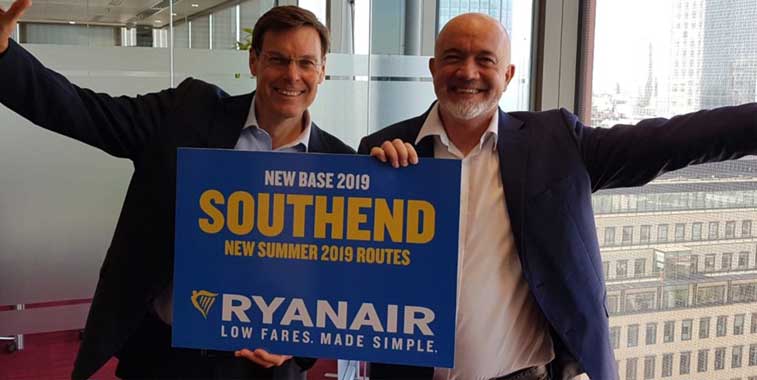 easyJet and Ryanair have become two of the biggest players in the European airline scene over the past 20 years.  Although these two titans have both spread their wings with operations reaching further into Europe, they each cut their teeth in the UK market as the low-cost business model boomed in the 1990s. Today, UK bases remain at the core of their respective networks. easyJet and Ryanair have competing hubs at eight UK airports in S18, with easyJet leading its Irish rival in weekly departing capacity at six of those airports. The two carriers seem to be avoiding direct competition at airport pair level, with the highest rate of route duplication witnessed at Belfast International, where 16% of the combined destinations on offer are operated by both airlines. The lowest duplication is evident at London Luton, with just 3.8% of the combined network being flown by both operators.

easyJet and Ryanair offered 74.98 million two-way seats on routes serving UK airports in 2008. By 2017 their combined capacity on such services had grown to 99.18 million seats, equivalent to an increase of 32%. Ryanair offered more seats to and from the UK in 2008 and 2009, but since then easyJet has overtaken the Irish ULCC to offer more capacity in its home market. Ryanair cut back its UK capacity for four consecutive years from 2009 to 2012. Its seat numbers subsequently fell from 39.20 million in 2008 to 33.75 million in 2012. Five years of annual growth then saw the Irish airline’s UK capacity climb to 48.82 million seats by 2017. easyJet only experienced one annual decline in its UK seat numbers from 2008 to 2017, with this taking place at the height of the global economic downturn in 2009. It offered 35.19 million seats in the UK market in 2008, and by 2017 this had grown to 50.36 million, representing an increase of 41%, compared to a 25% growth rate for Ryanair over the same period. easyJet’s share of the two airlines’ combined UK capacity increased from 48% in 2008 to 53% from 2012-2014 and was 51% last year. The Luton-based LCC offers significantly more UK domestic capacity than its Irish rival. In 2017 easyJet accounted for 87% of the combined UK domestic seats available between the two carriers. 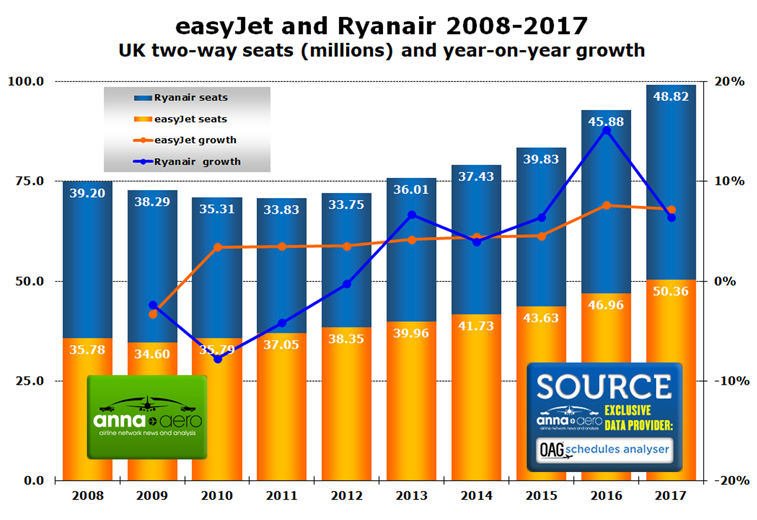 easyJet currently has 11 UK bases while Ryanair has 14. Both airlines also operate services into additional non-base airports. This analysis focuses on the UK airports at which both carriers have base operations to assess the extent to which they directly compete by serving the same routes. The eight airports which host both easyJet and Ryanair bases are London Stansted, Luton, Manchester, Bristol, Edinburgh, Belfast International, Liverpool and Glasgow. Ryanair will close its base at Glasgow at the end of S18 but it has been retained here since we have compared operations for a typical peak week in summer, in this case the week commencing 31 July.

The eight airports playing host to both easyJet and Ryanair cover all corners of the UK including two in Scotland, two in Northern England, three in Southern England and one in Northern Ireland. Wales is the only UK nation without a dual base, or for that matter a base operation from either easyJet or Ryanair. When the eight dual UK base airports are arranged in terms of the combined weekly capacity available from easyJet and Ryanair for S18, Stansted tops the table with more than 280,000 departing seats. Ryanair accounts for 88% of these seats which is not entirely surprising, given that Stansted is the largest base in its network. easyJet’s largest base at London Gatwick is not included in the comparison since Ryanair does not have a base there. However, the UK LCC’s original founding hub at Luton does feature, with nearly 110,000 combined weekly departing seats on offer, of which 82% are provided by easyJet. 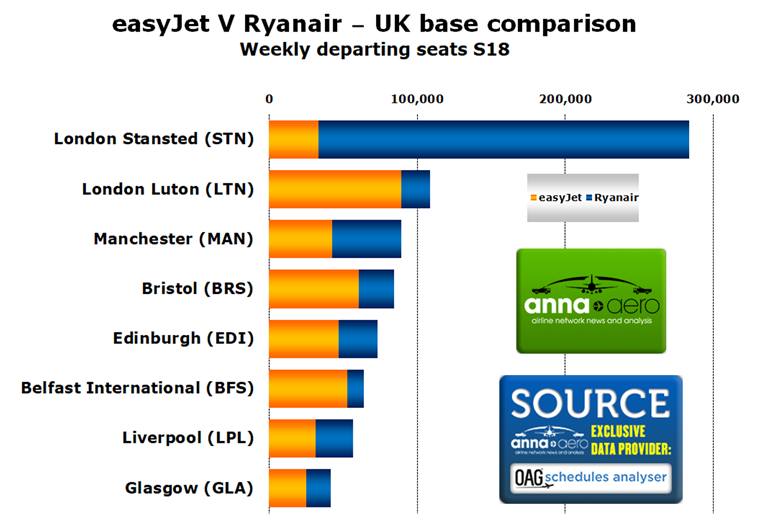 At five of the dual UK bases, one of either easyJet or Ryanair accounts for 60% or more of their weekly combined seats this summer. easyJet is the dominant player at Luton, Bristol, Edinburgh, Belfast International, Liverpool and Glasgow, while Ryanair offers more seats from Stansted and Manchester. The two airports where the capacity is most equal are Manchester and Liverpool. Ryanair heads the Manchester capacity table with 52% of the combined seats, while easyJet holds a narrow advantage at Liverpool with 55% of the departing seats.

The below table lists the eight dual UK bases operated by easyJet and Ryanair in S18, the combined number of routes the carriers offer from each airport, plus individual route numbers for both airlines and the number of duplicated routes. It is arranged in descending order according to the overall percentage of airport pairs duplicated by easyJet and Ryanair. On a specific airport pair level, the two rivals seem to be avoiding all-out competition from their dual UK base airports. Belfast International will see the highest overall percentage of duplicated routes, with easyJet and Ryanair mirroring each other on six of the 37 total routes, or 16% of the combined network they offer from the Northern Irish capital city. Both airlines will fly from Belfast International to Stansted, Manchester, Malaga, Alicante, Faro and Krakow this summer. The airport with the lowest level of route duplication is Luton. The two airlines will combine to offer 80 destinations from the London airport in peak S18, but only three of these, or 3.8%, are served by both carriers. Clearly if the same analysis was performed on a city pair basis the level of duplication would increase, with some cities such as Berlin, Milan, Rome and Stockholm served by multiple airports. This analysis chose to highlight duplication at airport pair level since in some cases multiple airports in the same city could be serving slightly different markets or catchments.

It is possible to estimate the level of duplication that will be experienced at London Southend when it becomes the latest dual base for easyJet and Ryanair in S19. Adding the 13 new Ryanair routes to easyJet’s S18 operation from Southend reveals that the two carriers could combine to offer up to 28 destinations from the London airport. They would currently compete directly on four of these routes, which is equivalent to 14% network duplication. This would place Southend third in the table between Liverpool and Manchester.

The 13 most common duplicated routes, flown by both easyJet and Ryanair from their dual UK base airports are identified in the graph below. The top of the table is dominated by Spanish holiday destinations with the two low-cost rivals competing on services to Malaga and Alicante from six of their eight UK bases, with Palma de Mallorca served by both carriers from five of their dual UK hubs. Seven of the most competitive destinations can be classed as beach break or leisure routes, while the other six are city links. Stansted and Belfast International are the only two UK domestic links in the top 13. 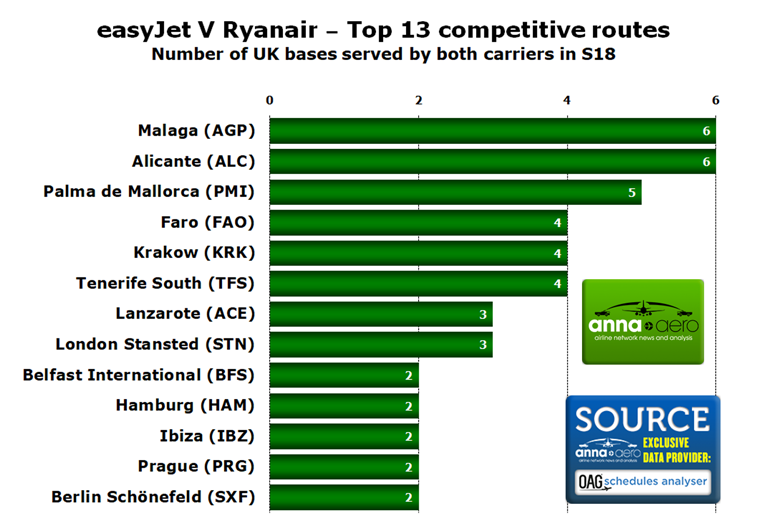 When Ryanair’s Southend base comes online in S19 the four routes on which it will compete directly with easyJet will follow a familiar pattern. They include the top three most duplicated destinations between the two rivals: Malaga, Alicante, and Palma de Mallorca, plus the Portuguese hotspot of Faro. 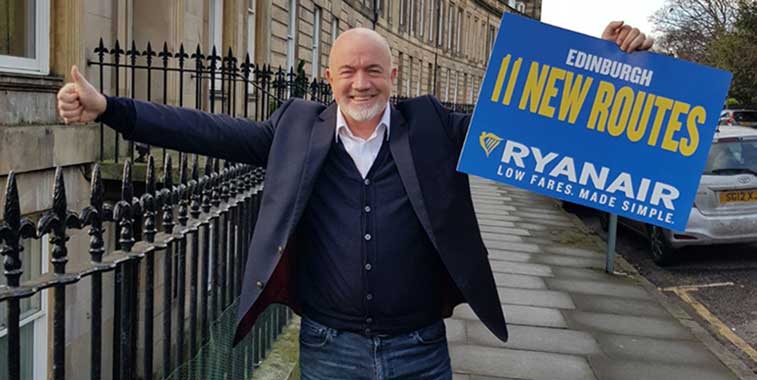 In January, David O’Brien, CCO of Ryanair announced that the ULCC would be closing its Glasgow base at the end of S18 and opening 11 new routes from Edinburgh. The Scottish capital airport is one of eight in the UK that will play host to easyJet and Ryanair base operations in S18. The low cost rivals will directly compete on services to seven destination from Edinburgh this summer.