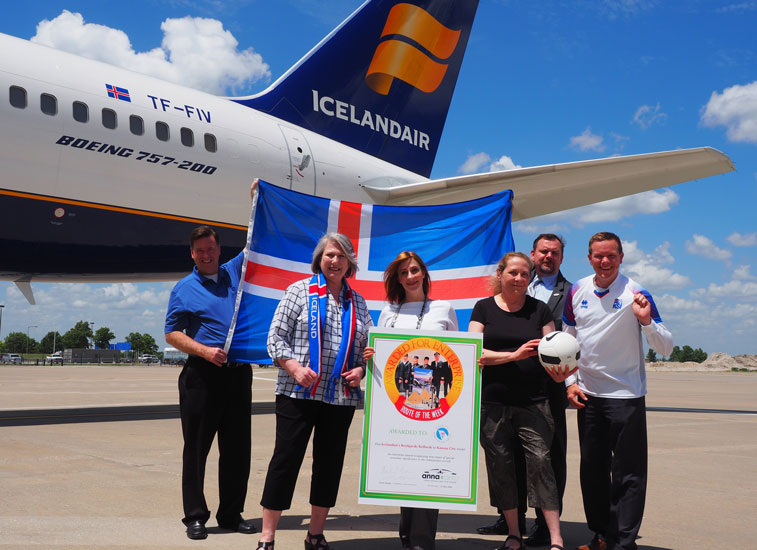 Kansas City recently picked up the anna.aero Route of the Week award, given for the airport’s first-ever transatlantic service from Reykjavik/Keflavik, courtesy of Icelandair. Given the major development, plus the fact that the US did not qualify for this year’s FIFA World Cup, the airport has decided to back Iceland for the trophy. Celebrating in football (soccer) fever fashion with the Route of the Week award are the airport’s Joe McBride, Susan Seely, Kathleen Hefner, Michelle Mallory, Pat Klein (Airport Director) and Justin Meyer. The airline offers three weekly flights on the route this summer. 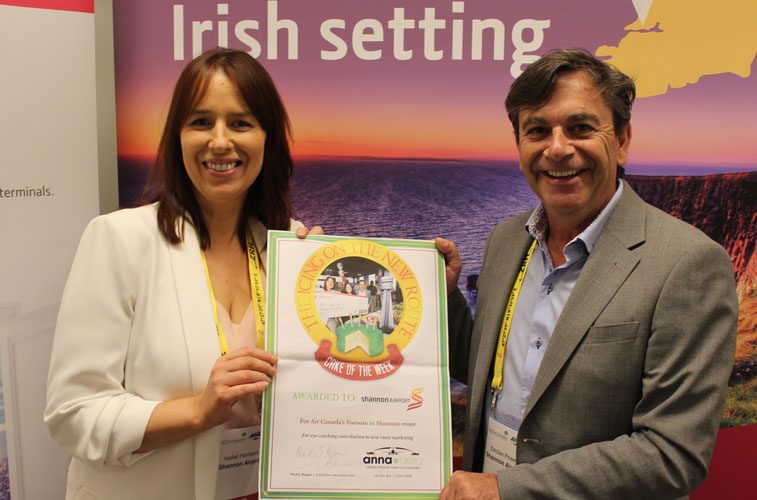 Heralding the crowning glory of winning the latest anna.aero Cake of the Week award, given for the bake it presented at Air Canada’s Toronto Pearson launch, are Shannon Airport’s B2B Manager Aviation Development, Isabel Harrison, and Head of Aviation Development, Declan Power at this week’s IATA Slot Conference in Vancouver. Iasi Airport in Romania welcomed the launch of a new domestic service from Cluj-Napoca with national carrier TAROM on 11 June. The 301-kilometre sector will be operated three times weekly with ATR 72s and there is no direct competition. Iasi greeted the inaugural flight with a traditional water arch salute and an impressive route launch cake. 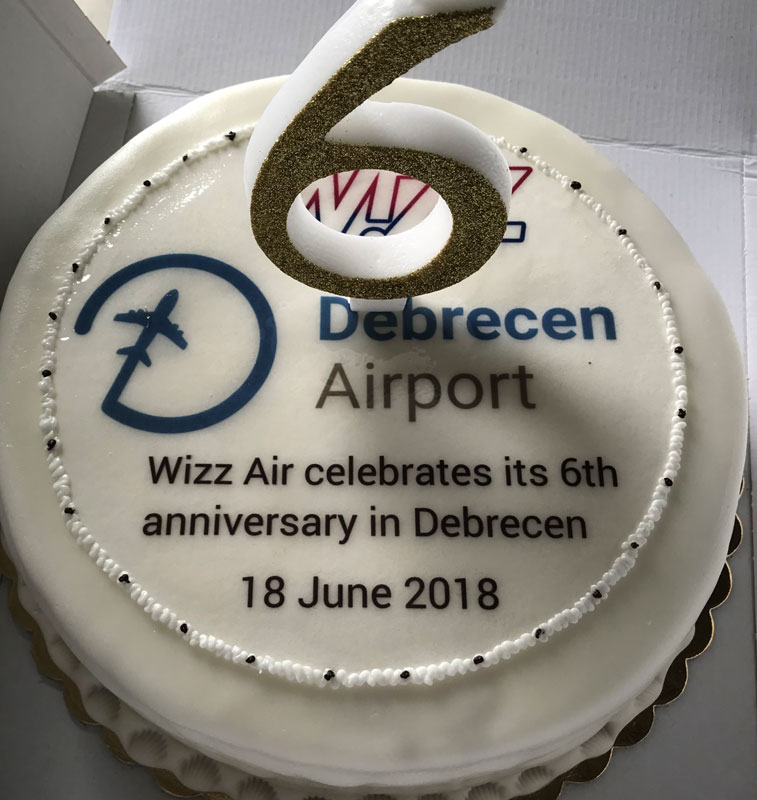 Debrecen Airport recently celebrated the six-year anniversary of its partnership with Wizz Air. In light of the occasion, the Hungarian airport baked this splendid cake to toast the success of the two parties’ business together. 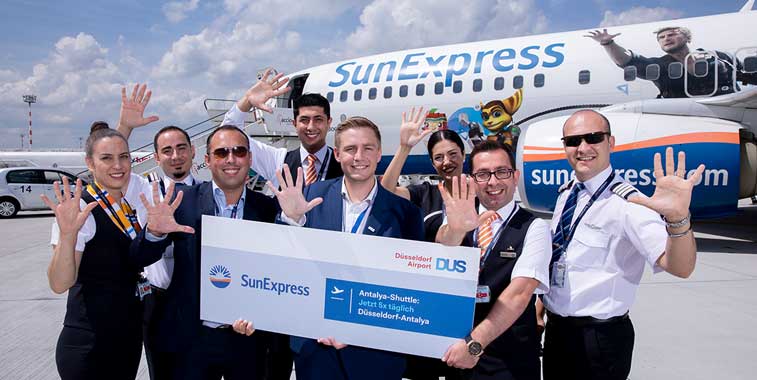 On 15 June Düsseldorf celebrated the launch by SunExpress of a fifth daily connection from the German airport to Antalya. Düsseldorf has labelled this operation the “Antalya-Shuttle”. Welcoming the new rotation with the crew were Stefan Krug, Manager Revenue Management, SunExpress and Florian Bongard, Manager Airline Marketing, Düsseldorf Airport. 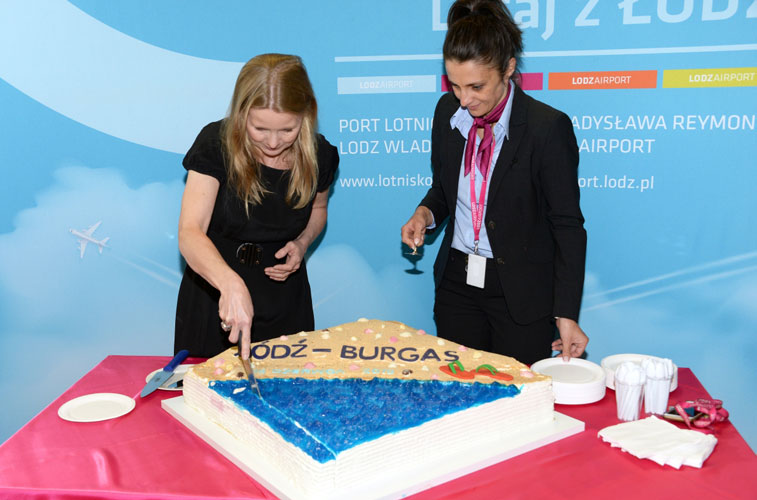 Lodz Airport recently celebrated the opening of a charter service to Bourgas, with the Polish airport baking a beach-themed cake to mark the new link to the Bulgarian resort. Seen cutting the cake is Lodz Airport CEO Anna Midera. 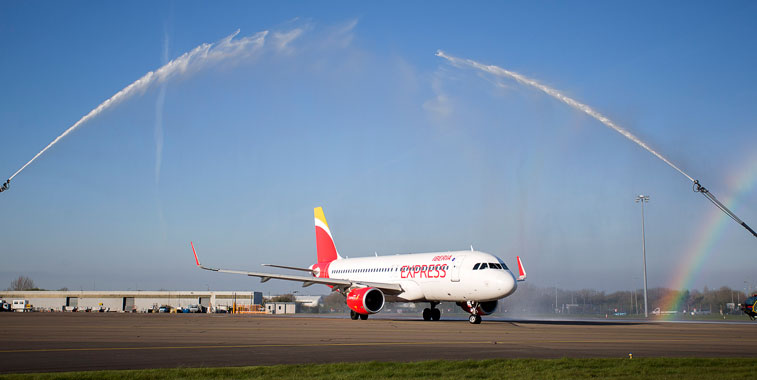 Cardiff Airport welcomed the return of Iberia Express’ summer seasonal service from Madrid on 14 June, a route that it will operate twice-weekly (Thursdays and Sundays) until 16 September. Trevor Martin, CCO of Iberia Express, said: “We are very pleased to be starting our service on the Cardiff-Madrid route today and hope that our customers are as thrilled with its return for a second year.” No other airline links Cardiff to Madrid.