There were a further 21 FTWA entries this week, which means we have now received a whopping 271 from around the world as we approach the half-way stage of this year’s competition. Narrow-body aircraft continue to be the main focus of attention, accounting for 57% of the entries so far, compared to 19% for wide-bodies, 16% for regional jets and 8% for turboprops. Lisbon Airport in Portugal extended its winning run, having taken the crown last week, and has now won the weekly competition three times in 2018. It secured the second Portuguese hat-trick in a week after the country’s footballing talisman Ronaldo opened his FIFA World Cup campaign with three goals against Spain. Will any other airports be able to break Lisbon’s impressive FTWA stranglehold in the coming weeks? Keep Monitoring!!! 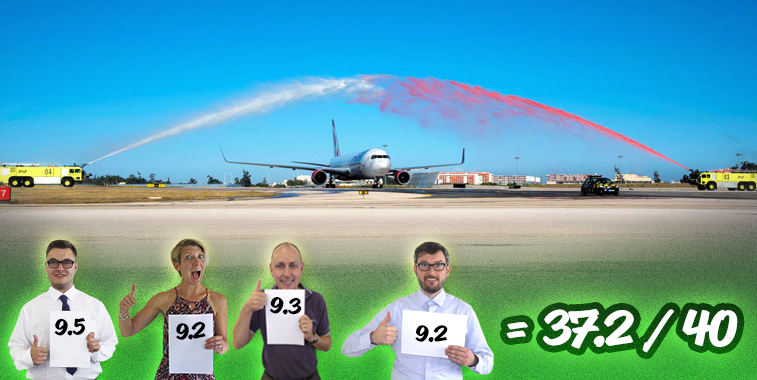 Judges’ comments: Lisbon is at it again! The Portuguese airport has already won the weekly competition twice this year and currently tops the 2018 leaderboard with an almost unassailable 39.7 score for the arch it provided to Delta Air Lines on the launch of its Atlanta link back in May. Another colour performance here means Lisbon takes the crown for the second week in a row and for a remarkable third time this year! 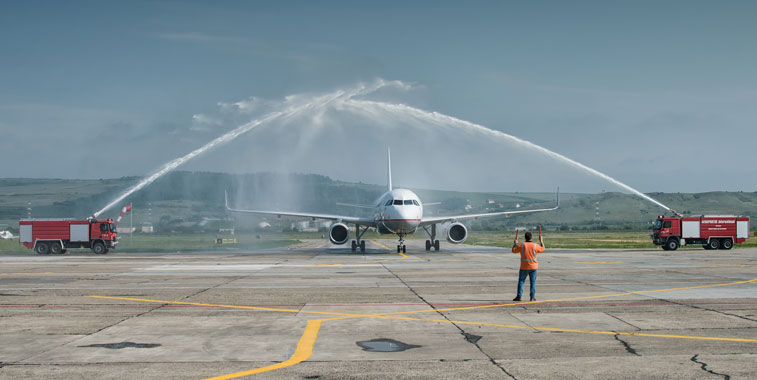 Aegean begins its Greek odyssey in this week’s FTWA competition.

Judges’ comments: It was a strong start to this week’s competition with this impressive early entry from Cluj-Napoca. This is the first FTWA we have received from the Romanian airport in 2018, but judging by the almost perfectly centralised arch on display here, its firefighting team are in no need of practice. 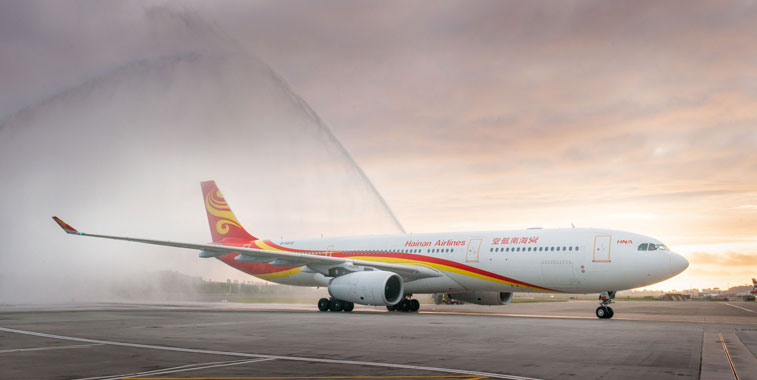 Is that red sky in the morning in Edinburgh? Could rain be on the way or just an FTWA?

Judges’ comments: An atmospheric Scottish sky greeted the dawn arrival of Hainan Airlines’ first flight from Beijing to Edinburgh on 12 June. Firefighters at the Scottish capital airport would have been up and awake unsociably early for this one, but they put in a good shift with a fine FTWA. The only thing marking this entry down is the lack of fire tenders in shot. 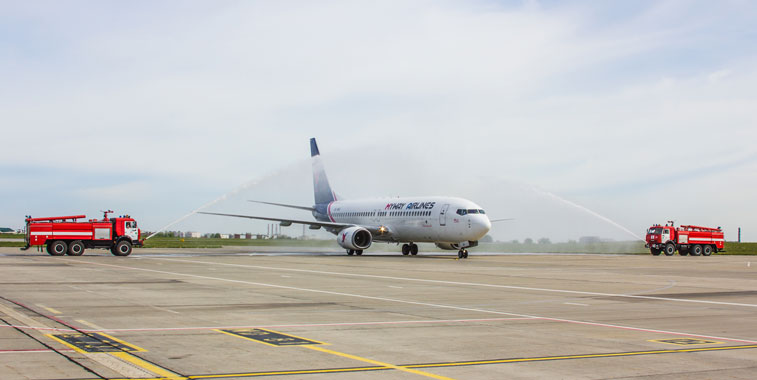 Judges’ comments:  A good effort here by Kharkiv Airport as it welcomed the first flight by Georgian start-up Myway Airlines. The scoring is only held back by the bright sky in the background, which makes it tricky to tell if the arch meets in the middle.The low-slung water cannons on these old-school fire tenders does make it look a bit like they’ve sprung a leak from their radiators! 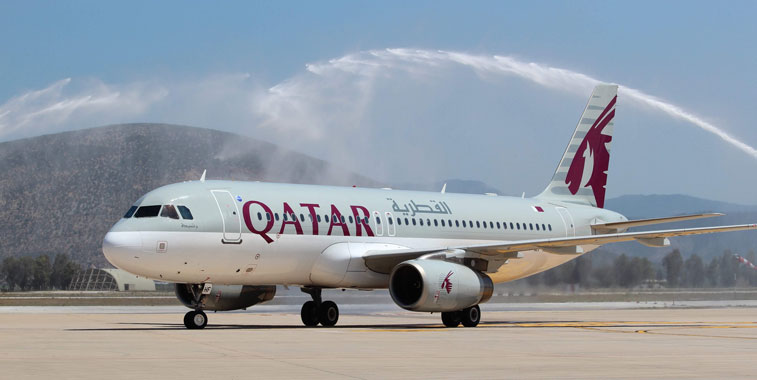 Judges’ comments: The first of three entries involving the MEB3 carrier this week, and the beginning of a concerning trend of disappearing fire tenders in the airline’s water greeting snapshots. Those water jets could be coming from a guy with a hose for all we know – that’s one powerful hose! 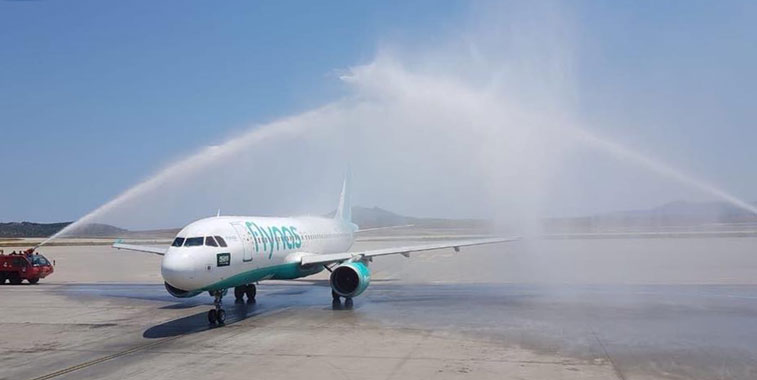 Back it up, we can’t see the other tender! flynas visits Vienna in a busy week of route launches.

Judges’ comments: Athens welcomed the arrival of flynas’ inaugural flight from Riyadh on 13 June with this sun-baked FTWA. This is the third entry we have received in the competition from the Greek captial airport this year, but the first that hasn’t been open to a public vote. The anna.aero judges were impressed by the symmetry of this water arch, hence the high scores. 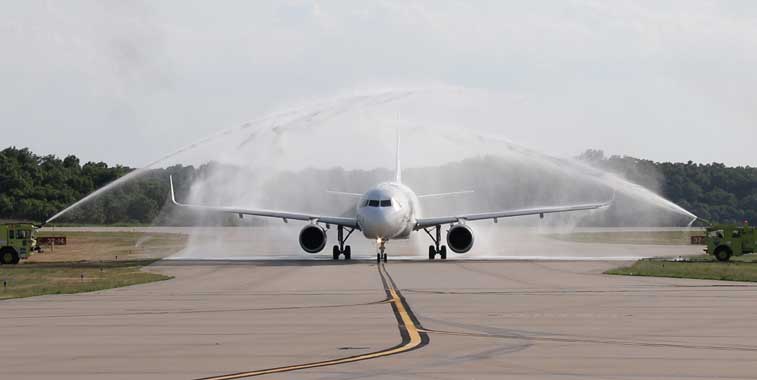 Just a little higher from the right hand tender and Branson could have been registering a top score.

Judges’ comments: For those of you whose knowledge of Branson extends no further than Virgin founder Richard, this Branson refers to a town in Missouri which includes a Titanic museum among its main attractions. Branson Airport was only built in 2009 but its firefighters have demonstrated here that they are already old hands at the FTWA game, creating an almost perfect arch. 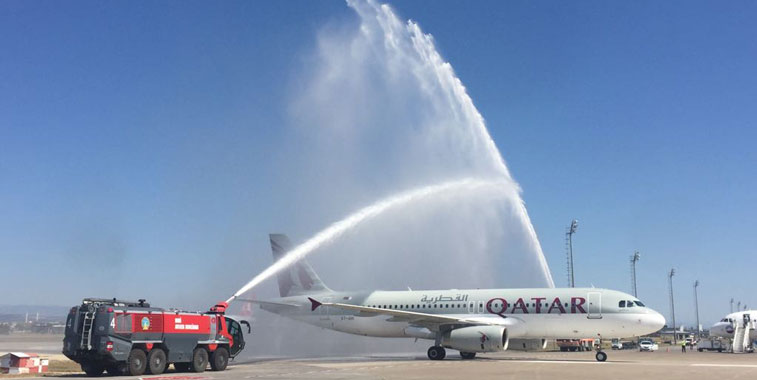 Easy there on the right hand tender!

Judges’ comments: This is the second FTWA featuring Qatar Airways arriving at a new Turkish destination this week, and the Antalya firefighting team have made a better job of it than their colleagues at Bodrum. Even so, the tender on the aircraft’s right hand side seems to be attention seeking, perhaps overcompensating for its lack of camera time… 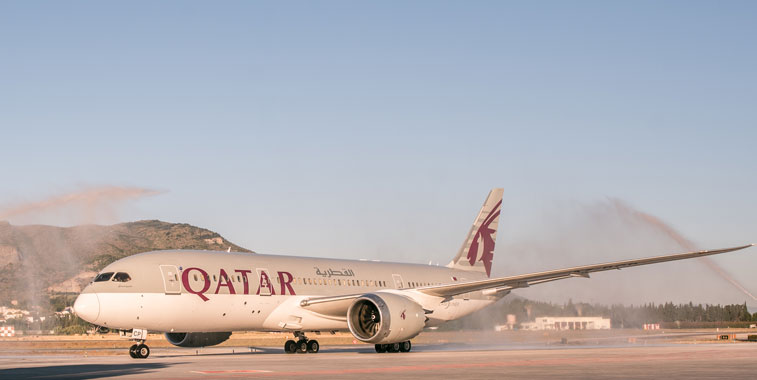 Its a hat-trick! The third entry featuring Qatar Airways, but what has happened to the water pressure in Malaga?

Judges’ comments: Is that an FTWA or is someone out watering the hanging baskets? The third entry featuring Qatar Airways this week came from Malaga Airport in Southern Spain. With no fire trucks in shot and only a couple of weak water jets on display, this effort won’t be troubling the 2018 competition leaderboard. 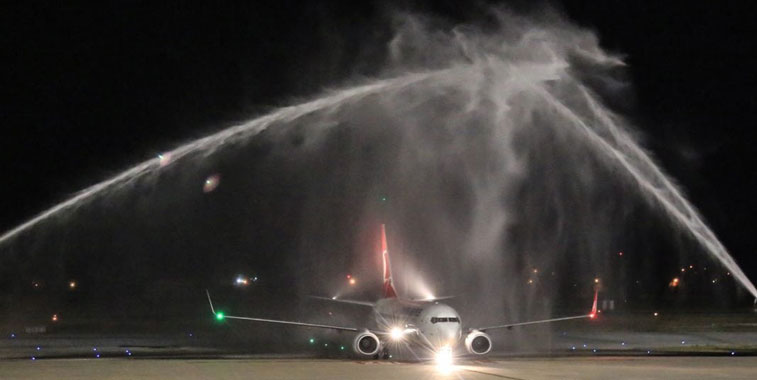 What time do you call this? The only night time FTWA entry this week.

Judges’ comments: This is a much better effort from Bodrum’s firefighting team than their earlier entry for Qatar Airways first flight from Doha. Perhaps the night shift has the stonger FTWA pedigree? What is going on with the v-shaped water jet on the right-hand side? Are there three trucks providing this welcome reception? One thing’s for sure, the V won’t be enough for Victory in another competitive week of FTWA entries. 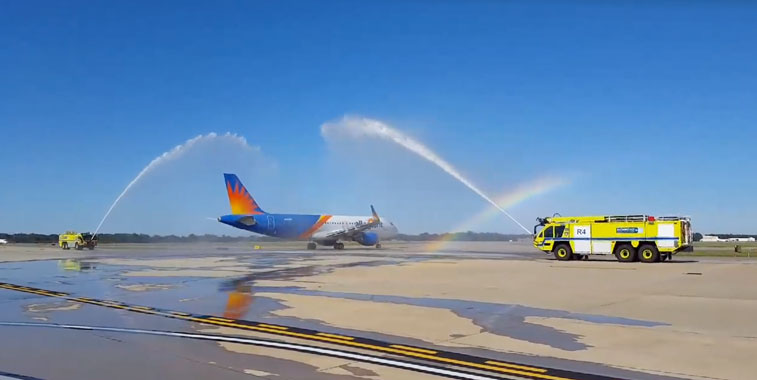 Judges’ comments: This is the first of two appearances from Allegiant Air this week. There’s a lot going on in this scene from Richmond Airport on 14 June, clear blue skies, and a nice symmetrical feel to the water arch, but most impressively the fire trucks seam to have generated their very own rainbow! Sadly there isn’t enough oomph behind these water jets to provide a pot of gold in this week’s competition. 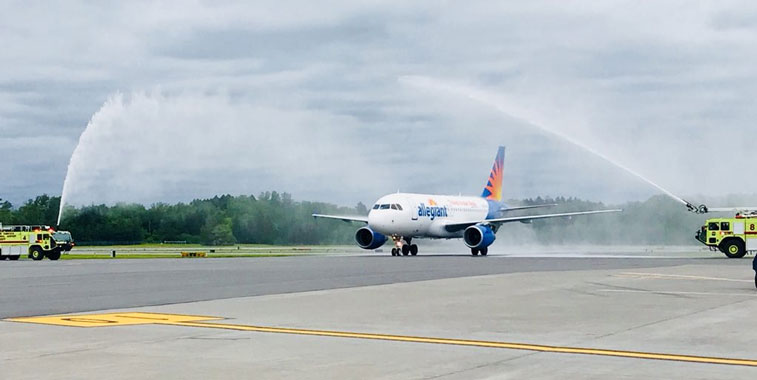 If this Allegiant Air Airbus is heading for stand 10, the photographer may need to take evasive action.

Judges’ comments: Drearier skies awaited the arrival of Allegiant Air’s first flight from Nashville to Syracuse. A quick review of our detailed FTWA statistics reveals that this is the first entry ever received from the airport in New York State since records began in 2013. Judging by this showing, it could do with a few more route launches to experiment with water pressure settings for the perfect arch. 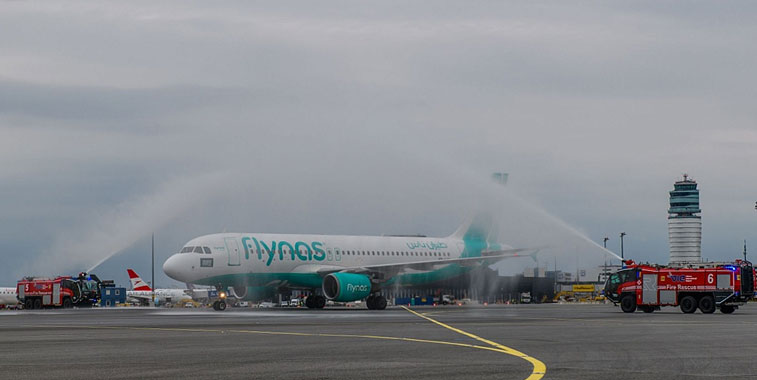 Judges’ comments: flynas has been busy this week launching six new routes, including this one from Riyadh to Vienna. Unfortunately the grey skies in the Austrian capital obscure what seems to be a pretty solid FTWA. The Vienna firefighters had plenty of practice on 14 June, with this being one of two water arches they provided for new route launches on that day. 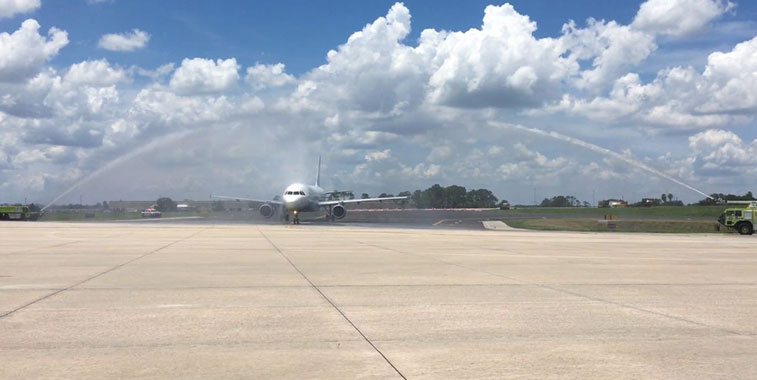 This is an Interjet aircraft. You’ll just have to take our word for it. 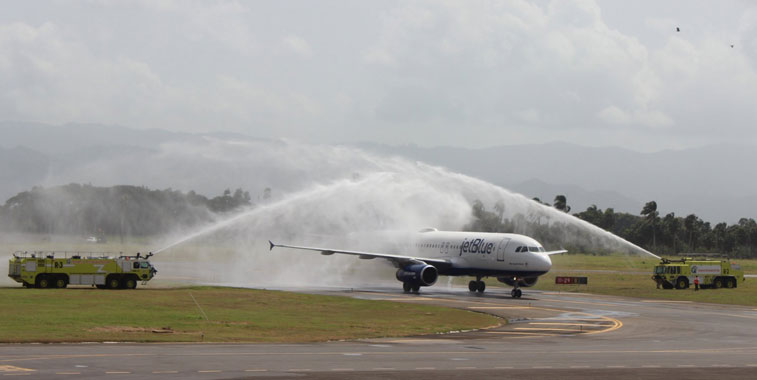 Looks like someone ordered a jet wash for JetBlue.

Judges’ comments: It’s another first this week! This is the premier FTWA entry from Santiago in the Dominican Republic since our records began in 2013 and a fine debut it is too. If we were going to be picky you could say the arch could do with a little more height. At this angle JetBlue will be making a saving on aircraft jet wash fees. 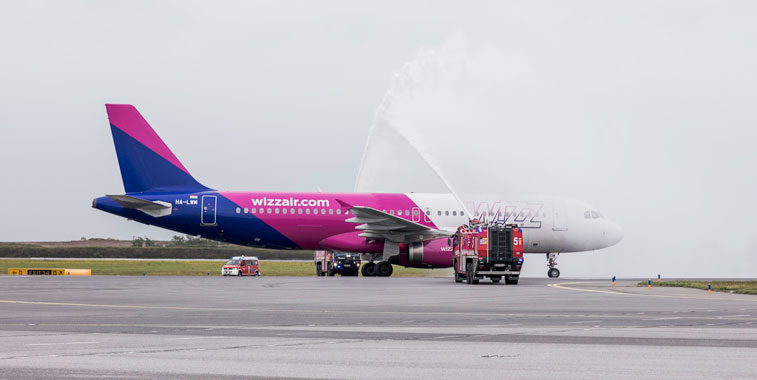 The 14 June wizz-ed by for Vienna’s firefighters.

Judges’ comments: The busy Vienna Airport firefighting team make their second appearance in the competition this week, giving Wizz Air’s inaugural departure to Rome Fiumicino a traditional send off. This has the makings of a perfect FTWA, just a bit too much oomph from the left hand tender. 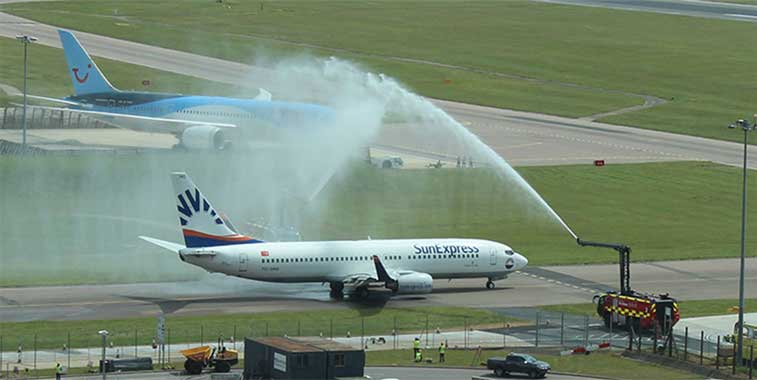 A rare bird’s-eye view of this FTWA from the London Luton Airport tower.

Judges’ comments: anna.aero’s intrepid roving Editor Marc Watkins ventured to London Luton to snap this FTWA organised for the inaugural SunExpress service to Antalya. The airport treated Watkins to a trip up the tower, hence this rare bird’s-eye view of the action. 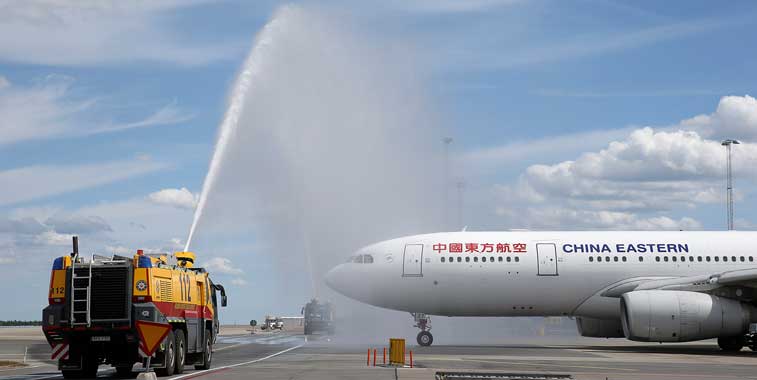 Judges’ comments: Side-on shots appear to be all the rage this week, and here’s another. Stockholm Arlanda welcomed the first flight from Shanghai Pudong with this impressive arch. This is the first entry from the Swedish capital airport since August 2017, but it is the second time China Eastern Airlines has been the focus of an FTWA entry this year. 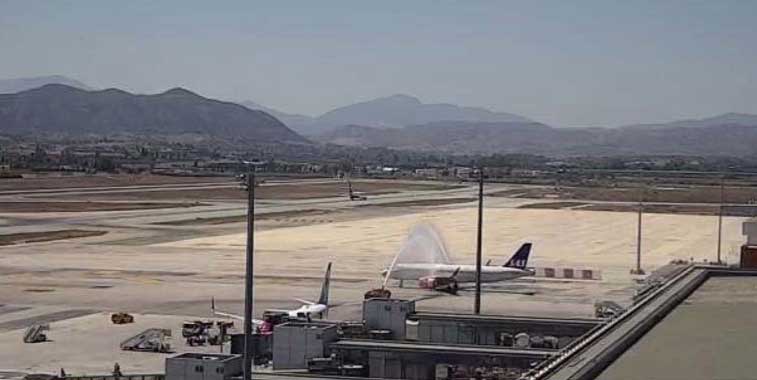 This looks good from Malaga, although the image is a little grainy…

Judges’ comments: Malaga welcomed a new service from SAS on 16 June and from what we can tell, produced a superb FTWA. Unfortunately this entry is slightly let down by the resolution of the image. 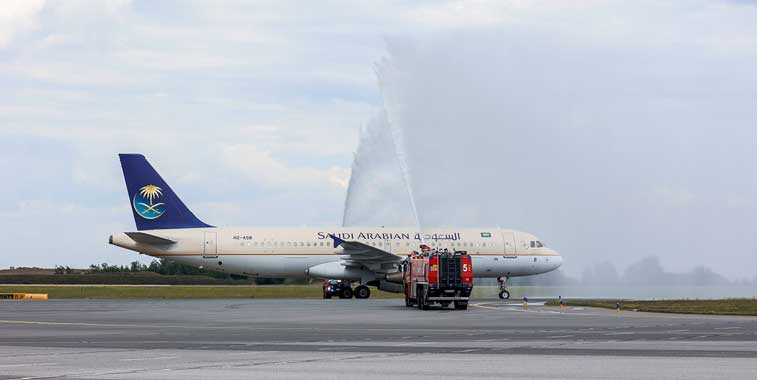 Vienna completes a hat-trick of FTWAs this week.

Judges’ comments: The third and final entry from Vienna this week. At least the airport’s firefighting team managed to catch a day off from FTWA duties on 15 June! They were back in business and back in form here with yet another side-on angle entry. 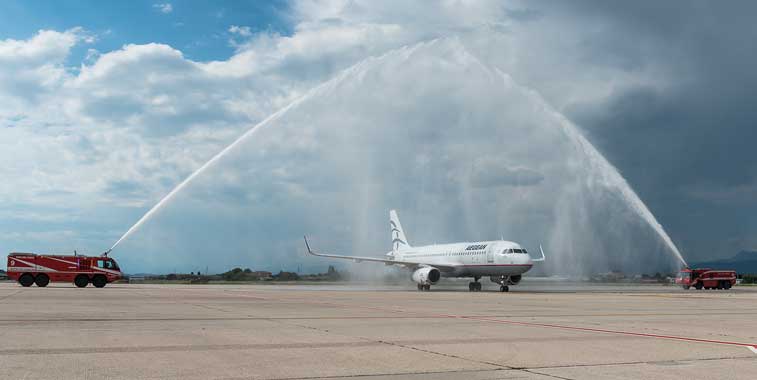 Now that’s an entrance! A fine first FTWA from Verona.

Judges’ comments: This week’s competition ends like it began, with an impessive water arch featuring Aegean Airlines. This is Verona’s first recorded entry in the competition and what a way to start. A fine FTWA from the Italian airport.