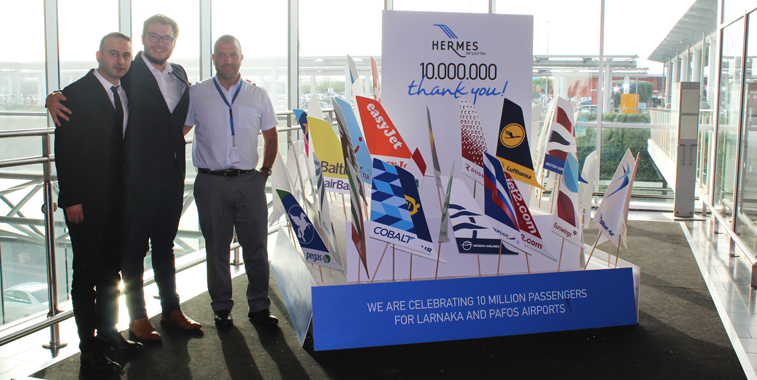 2017 was certainly a historical one for Hermes Airports, with Larnaca and Paphos between them greeting over 10 million passengers during a calendar year for the very first time. Earlier this summer anna.aero’s Assistant Editor Jonathan Ford travelled to the island to meet with Hermes Airports’ Media Relations Manager Adamos Aspris, and Senior Business Development Officer Panicos Tsolias. The company expects to hit 11 million passengers in 2018. The question is though, will your airline’s tailfin be the next to grace the tarmac of Larnaca, Paphos, or even both airports?

“Welcome to the year-round island.” These are the words of VisitCyprus, and a statement that was researched in-depth by anna.aero’s Assistant Editor Jonathan Ford when he was invited by Hermes Airports to discover the true beauty of the Mediterranean nation back in May. The two airports run by the company – Larnaca and Paphos – have seen phenomenal growth in recent years, with their combined annual traffic increasing by 46% between 2013 and 2017.

Last year, Larnaca and Paphos airports combined handled 10.25 million passengers, representing an increase in traffic, over 2016, of more than 14%. For Q1 2018, traffic from Cyprus’ airports was up 11%, reaching 2.18 million passengers. If this level of growth is maintained throughout the rest of the year, then Hermes Airports can expect to welcome around 11 million passengers through its terminals in 2018. 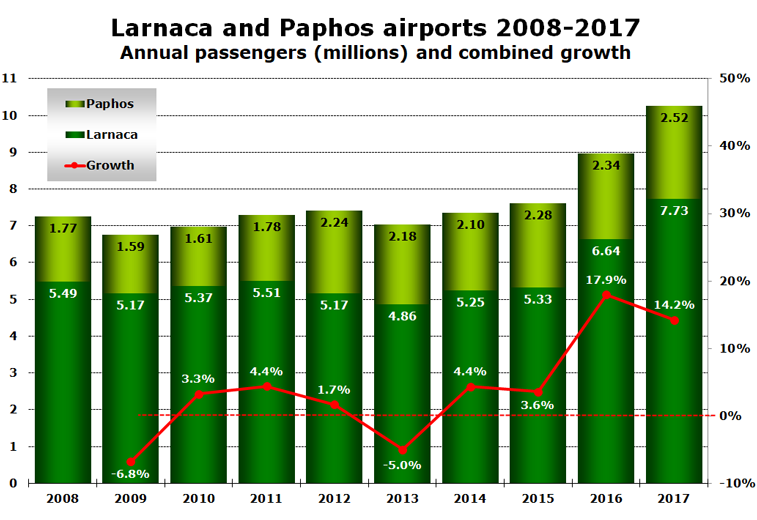 The results encountered in 2017 highlight a 46% surge in demand versus 2013, a year when the island’s two airports processed 7.04 million passengers. This has mainly been the result of the company’s successful air service development strategy, including an integrated incentive schemes program offered to the airlines supporting both the introduction of new routes and markets and growth on the existing routes, the numerous marketing activities including joint marketing campaigns with airlines, organising trade workshops, airline events, as well as online promotion for airlines. In addition, the successful implementation of Hermes to promote Cyprus as a top-quality tourism destination with advanced product and international standards. The company has also managed to attract three airlines to create a base in Cyprus, namely Aegean Airlines and Blue Air at Larnaca, plus Ryanair at Paphos. At the same time, three new Cypriot carriers have entered the market, namely Cobalt, Cyprus Airways and TUS Airways. There has also been growth from major operators including easyJet, Jet2.com and Wizzair.

Based on scheduled capacity for the past few seasons, it shows that Larnaca and Paphos airports are able to achieve similar growth patterns during summer months as they are in winter seasons, demonstrating that passenger demand is growing throughout the year. The graph below shows the growth rates for the previous seasons from the two airports between S13 and S18. Those highlighted in light green are winter seasons, while those in dark green represent summer. 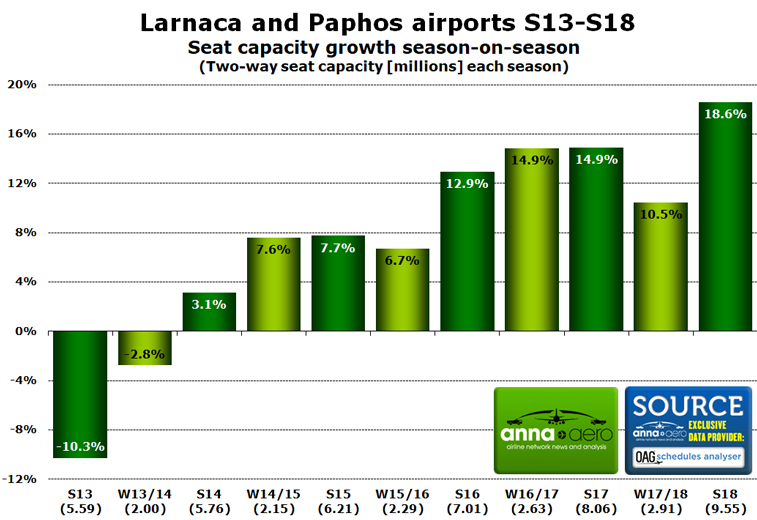 The graph above shows that winter growth patterns are similar to those encountered during the summer months, with three of the past four winter seasons since 2013 reporting stronger growth than in the summer season it has just followed, namely W13/14, W14/15 and W16/17.

Last year Cyprus recorded 3.65 million tourist arrivals, up 15% (465,500 more) versus 2016, while since 2013, the number of tourists destined for the island has grown 50% (1.21 million). During the first five months of 2018, tourist arrivals to Cyprus reached 1.13 million people, up by over 14% versus the same five-month period of 2017, based on data obtained from the Republic of Cyprus Statistical Service (RCSS). Looking at the months in more detail, it highlights that January (+22%), February (+23%) and March (+36%) encountered double-digit growth, while April (+9.7%) and May (+7.6%) saw a smaller percentage rise. While the results for the latter two months are still exceptional, these figures further highlight Cyprus’ potential as a year-round destination.

The island’s main incoming tourists come from the UK and Russia, with these accounting for 34% and 23% of annual tourists respectively. Before travelling to Cyprus, anna.aero’s Assistant Editor Jonathan Ford met with Maria Kouroupi, Senior Aviation Development Marketing & Communications Manager for Hermes Airports, who said at the time that while these markets are great for Cyprus, the company was keen to grow inbound travel from other countries including France, Italy, Germany and to enhance operations from the Scandinavian region, and the Baltic States, particularly in off-peak months . “We have a number of objectives, with one of those recently being to add more routes to Ireland and Spain. This was achieved with Cobalt launching Dublin and Madrid flights, and Ryanair adding Dublin to Paphos, but we want to grow more in these markets,” informed Kouroupi.

While the number of tourists visiting the island is growing, another key factor supporting Cyprus’ year-round potential is the trend of Cypriot travellers making international journeys. In 2017, data from RCSS showed that 1.41 million international trips were made by Cypriot residents, up 11% versus the results of 2016. 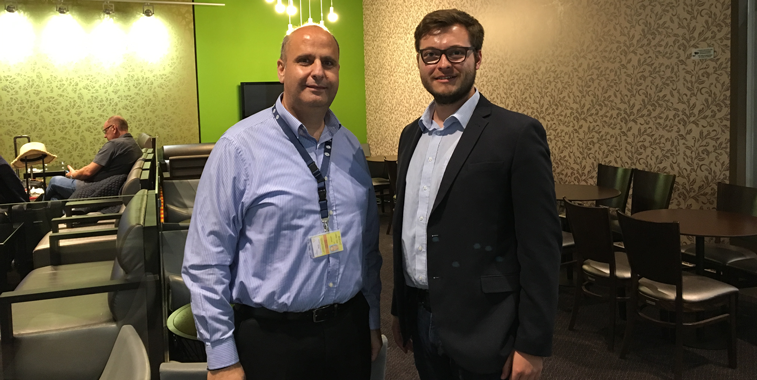 While in Cyprus, anna.aero’s Assistant Editor Jonathan Ford was given a tour of Paphos Airport by Yiannis Harpas, Senior Manager of Operations for the Cypriot facility, with the two pictured together in the airport’s business lounge. During Q1 2018, traffic from Paphos was up by nearly 13%, while in April it rose by a healthy 15%.

More than just a sun and sea destination

Many of the 3.65 million visitors to Cyprus in 2017 were looking for a sun and sea escape, however the island has so much more to offer its guests, as discovered by anna.aero. Cyprus has a long history and rich culture that spans more than 10,000 years, offering visitors an educational and authentic experience, with highlights including iconic ancient ruins, plus sites scattered across its vast and eye-catching landscape. Travelling away from the coast, the island’s great pine mountains and quaint villages showcase the best in ancient traditions, informing on the legends and history within their traditions and culinary delights. Ranging from mountain strolls, exploring cultural attractions, leisure activities including golf, skiing, diving or bird watching, Cyprus has the perfect diverse blend of tastes and desires for all travellers.

With this in mind, it was time for anna.aero’s Assistant Editor, and world traveller, Jonathan Ford to go and explore the beauty of Cyprus and its many delights that are not just seasonal, but year-round attractions. Time to explore the year-round island. anna.aero’s Assistant Editor Jonathan Ford was collected from his hotel by one of Cyprus’ leading tour guides, Christakis Constantinou. The first port of call for the intrepid ventures was an orange grove, an activity which is popular with Eastern European tourists according to Constantinou. From there they went to the ancient site of Kourion, an important ancient city-state which is a UNESCO World Heritage Site situated some 13 kilometres outside of Limassol. From there Ford and Constantinou then headed to Aphrodite’s Rock, otherwise known as Petra tou Romiou. According to one legend, this rock is the site of the birth of the goddess Aphrodite, perhaps owing to the foaming waters around the rock fragments, and for this reason it is known as Aphrodite’s Rock. From Aphrodite’s Rock, the pair of Constantinou and Ford made there way to the popular town of Paphos, home to Hermes Airports’ second biggest facility. While Paphos is popular for its holiday resorts, it is home to over 12% of Cyprus’ population. The airport is also a gateway for the Troodos Mountains, home to many mountain and ski resorts, with four of the latter being placed on Mount Olympus, the island’s highest point. More information about Skiing in Cyprus can be found at this link. From Paphos, it was time to head back towards Larnaca via Lefkara, a village famous for its lace, known as lefkaritika, and silver handicrafts. According to the Japanese Association of Travel Agents, Lefkara is one of the 30 most beautiful towns in Europe. After visiting, it is no surprise to see that it has been ranked in this category, as it features cobbled streets and picturesque architecture, with views from the top of the hillside which show the true beauty of this fantastic country. Finally, another topic to note about Cyprus is its fantastic culinary delights, ranging from fantastic seafood, savoury treats and sweet sensations. Ford can confirm that while in Cyprus, he had his best-ever Octopus, prepared for him at one of the many award-winning restaurants that grace Limassol Marina. Along with this, the island hosts many traditional tavernas.