With 52% of all the weekly victors so far in the 2018 Arch of Triumph competition, Europe has seemingly already notched its fifth straight win in the inter-regional battle (North America won in the first year of the competition in 2013). With top position secure, the fight for second spot is where the action is at, with Asia and Australasia currently in contention with four wins a piece. Some distance behind, but by no means out of making a late surge for glory are the Middle East (two wins), followed by North and South America (one win each). Using a different metric to understand regional success, Australasia is on the top of the leader board in terms of the wins per entry ratio, with a score of 0.5, ahead of the Middle East (0.33) and Asia (0.22). On this measure, Europe is a distant fourth, with a wins per entry ratio of 0.08. Keep Monitoring!! 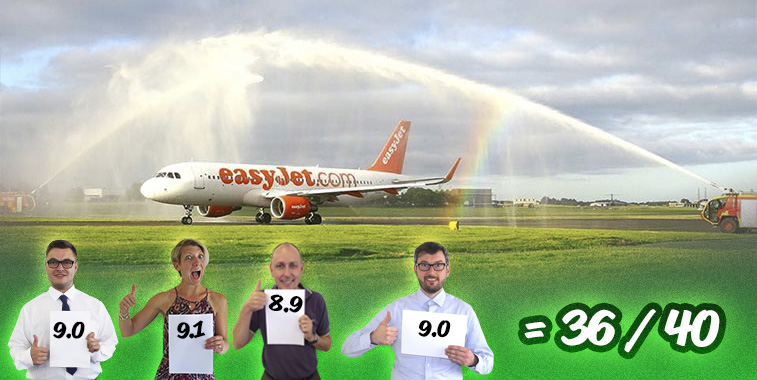 And the winner is…

Judges’ comments: It was a close run thing in the end, as Belfast International’s fire fighters were put under pressure by their colleagues at Abbotsford in Canada and Berlin in Germany, as both airports scored in excess of 35 points but failed to wrestle this week’s win away from the Northern Ireland airport. No doubt there will be a wee swall to celebrate the win… 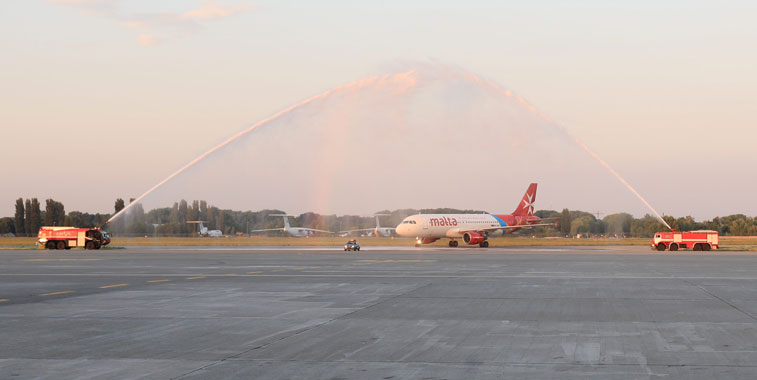 Enjoying the Russian relics in the background of this FTWA…maybe they are still flying??

Judges’ comments: It is always nice to see a bit of Russian heavy metal in a FTWA image. Our data elves are pretty certain that the two beasts on the right are Il-76s; but they are torn between either a Tu-154 or Yak 42 for the aircraft on the left. If they were forced to make a decision one way or the other, they would plump for the latter. If your Russian aircraft recognition is better, then please let us know. 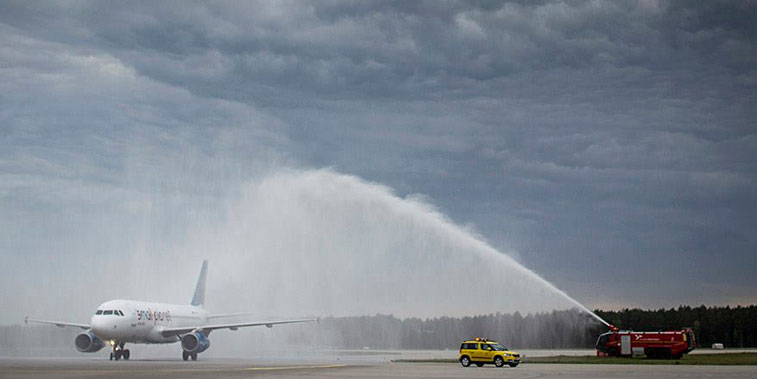 Judges’ comments: This is the first time in six years of competition that we have had a FTWA featuring Small Planet Airlines, which is a leisure carrier based in Lithuania. Was it worth the wait. Hmmmmmmm…not really. The airline is launching a new route to the Polish airport from Cologne Bonn next week…so it has the opportunity to make amends. 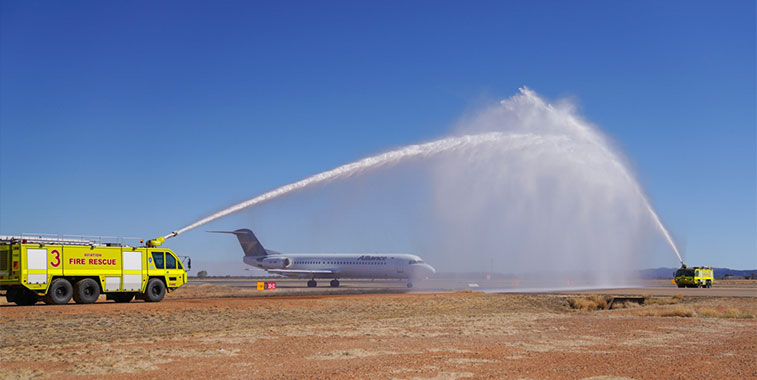 Looks like the grass in Alice Springs could do with some of that water!!

Judges’ comments: In Alice Springs, temperatures can vary by up to 28°C (82.4°F) and rainfall can vary quite dramatically from year-to-year. In summer, the average maximum temperature is in the mid-30s, whereas in winter the average minimum temperature can be 5.5°C (41.9°F), with an average of 12.4 nights below freezing every year. Strewth!! 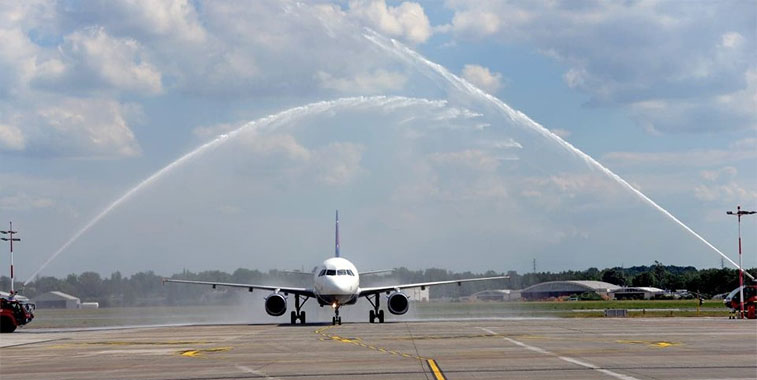 Only 3% of FTWAs come from this type of carrier…

Judges’ comments: Given its business model, Onur Air is classified by our data elves as a leisure carrier, this is only the eighth FTWA we have received so far in 2018 which has been provided for a leisure carrier (#7 was Small Planet Airlines above), meaning that this market segment has just 3% of water arches this year – the smallest of the four market segments. 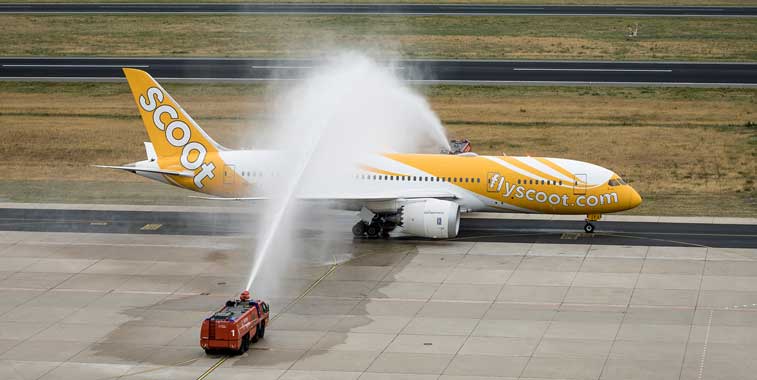 Those two tenders really are in full flow…splooooooooooooosh!

Judges’ comments: No wonder the taxiway looks a bit damp…as the two tenders at Berlin Tegel are certainly pumping out the water for this inaugural flight celebration. Despite the high outputs from the attending vehicles, there is a nice structure to the FTWA and worthy of the German airport taking third spot this week… 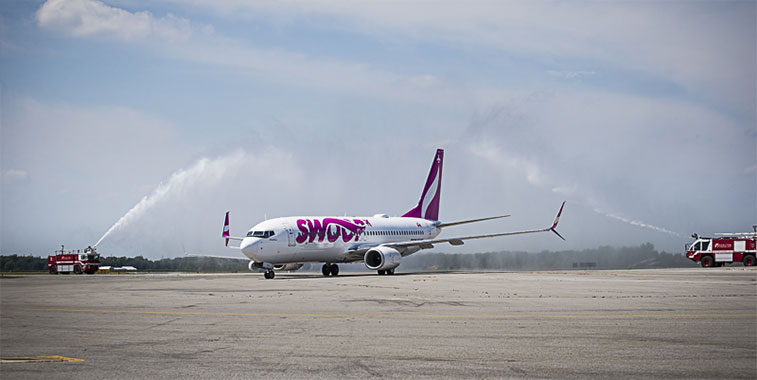 Not sure about a Swoop…more of a flop…

Judges’ comments: It doesn’t get much bigger than this. A brand new low-cost airline is launching its first-ever services from your airport. Everything needs to perfect…this thing is going global…as its big news in the aviation world. And then you get this FTWA…which doesn’t really match-up to the all the razzmatazz and hoo-ha…oh well… 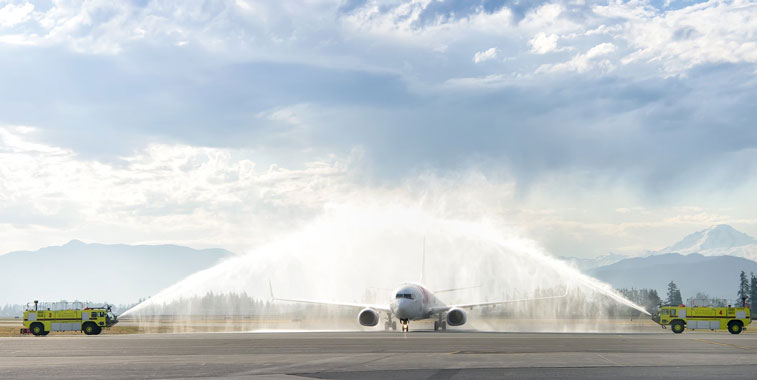 Judges’ comments: Wow…wow…wow! What a fantastic backdrop, and an impressive FTWA from the guys over in Abbotsford. It’s as though the firefighters were trying to silhouette the mountain peak in the distance with this salute, and with the added fact that there is a splendid water curtain, plus matching tenders at an equal distance apart from the aircraft, it’s only going to score high. Just a shame the sky was not a little clearer…but who can determine weather…? 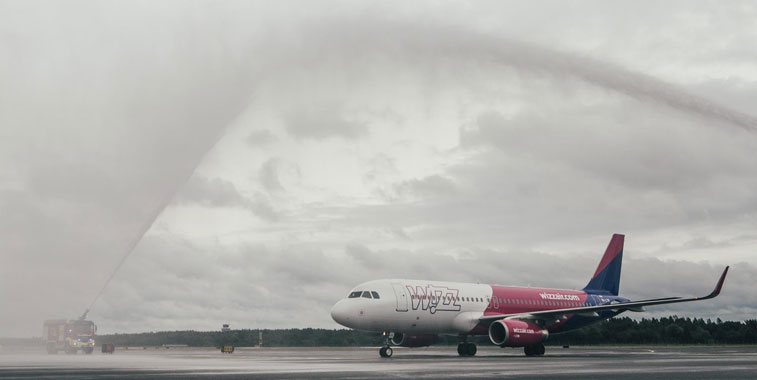 Want to move to Estonia…we do!!

Judges’ comments: As well as being one of the world’s most digitally advanced societies, citizens of Estonia are provided with universal health care, free education and the longest-paid maternity leave in the OECD. Sounds good eh? They also produce pretty tasty FTWAs too!! 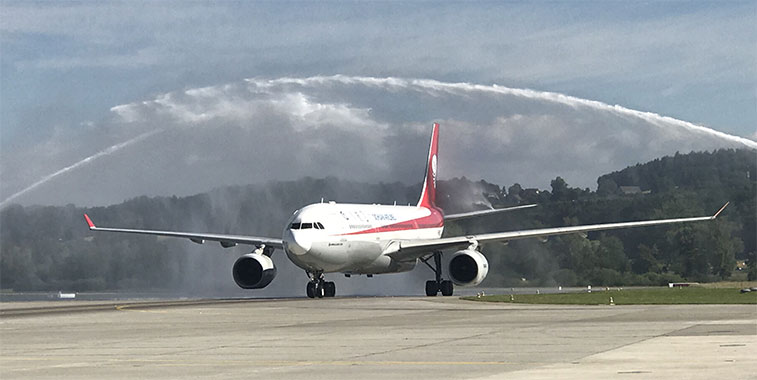 This FTWA is a bit flat for a Swiss water arch…

Judges’ comments: Over 60% of Switzerland is mountainous and a quarter of it is covered with forest. Surely this topography is therefore inspiration enough for the fire fighters at Zurich Airport. Clearly not, as this water arch is well…errrr…a bit flat for a nation famous for its mountains! 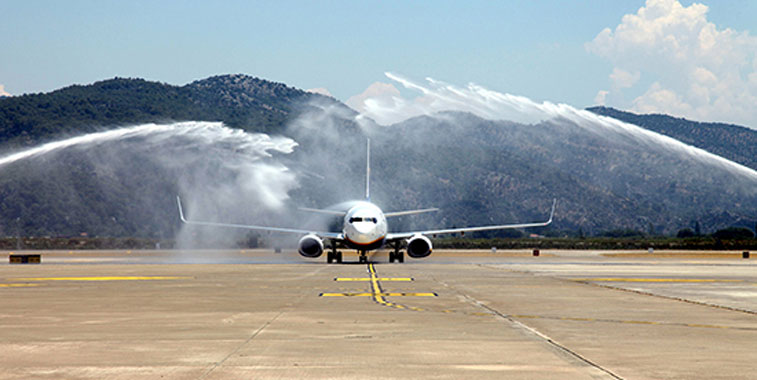 A bit of Turkish delight? More like Turkish debatable…

Judges’ comments: Clearly the arrival of Ryanair in Dalaman is a momentous occasion, as this is the first-ever FTWA that our data elves have received from the Turkish airport. For a first outing, its not a bad effort…and our judges confirm that they have certainly received worse efforts from airports breaking their FTWA cherry… 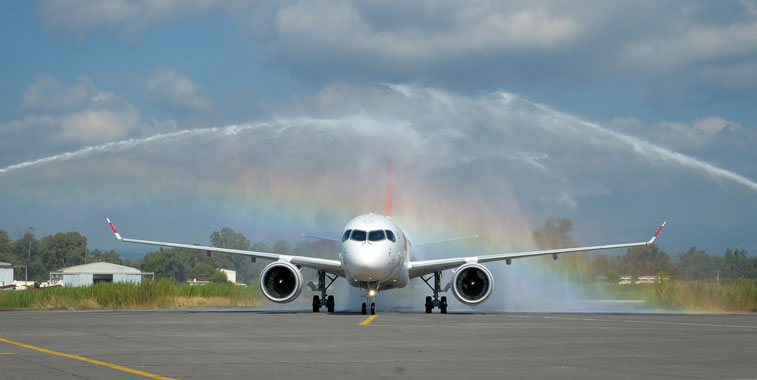 A bit of a rainbow on display here in Greece…

Judges’ comments: The Pride of Kalamata. No not the Greek airport’s fire fighters…but the 2016 song by Mimis Plessas, which is featured on the album the Complete Guide to Mimis Plessas. While the Greek composer, who was born in Athens, might be able to make sweet music, the Kalamata Airport fire fighters have struggled to play the right FTWA notes… 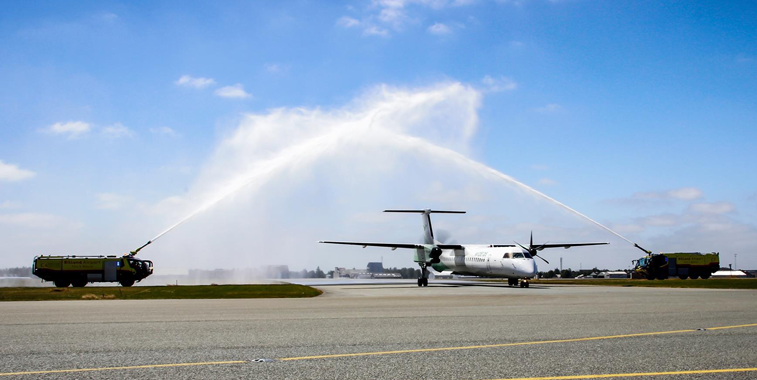 Judges’ comments: The anna.aero data elves split all the FTWAs that they receive into four aircraft categories – namely wide-bodies, narrow-bodies, regional jets and turboprops. The latter, which is in evidence above in Billund, is the least-common aircraft grouping, with just 22 of the 284 (8%) water arches entered in the 2018 competition.