Flair Airlines first mover in Canadian ULCC market; Edmonton is largest base, competition with Swoop on three routes this summer 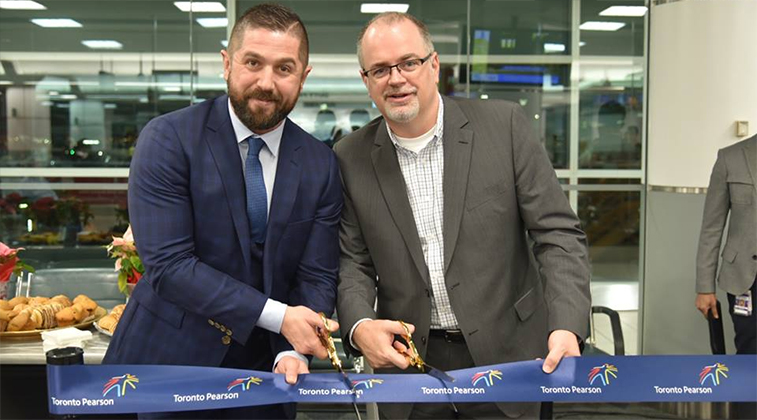 Flair Airlines will offer 46,176 weekly seats across its network during the week commencing 31 July, a significant 393% increase compared to the equivalent week last year. It has opened 13 new routes since last summer, including this one from Edmonton to Toronto Pearson on 15 December 2017.  Cutting the ribbon at Pearson to launch the new service were Mirza Smajic, Director of Passenger Sales & Marketing, Flair Airlines and Scott Armstrong, Director of External Communications, Greater Toronto Airport Authority (GTAA).

The Canadian ULCC market has been front page news in commercial aviation circles, due to the launch of Swoop, which is 100% owned by WestJet. Swoop began services on 20 June and currently operates four routes, but will introduce two more in the coming months. However, it was not the first mover in the burgeoning ultra-low fare scene in Canada. That honour goes to Flair Airlines which, according to ch-aviation, was an ACMI/charter operator before it acquired the virtual budget carrier NewLeaf in 2017, and currently operates a fleet of seven 737-400s. The crowded Canadian skies are expected to welcome a third new entrant in the first half of 2019, with fellow ULCC operator Canada Jetlines announcing that it expects to receive its first two aircraft during that period. Flair is currently the only one of these three airlines to file data with OAG. An analysis of Flair’s schedule for a typical peak week in S18 reveals its main operating bases and routes and identifies where it may face competition from its ULCC rivals.

Edmonton off to a Flair flyer

Flair currently only operates domestic services and will offer flights from 12 Canadian airports during the week commencing 31 July, with Edmonton by far its largest operation. The Alberta airport accounts for more than one-third of the ULCC’s weekly departing seats this summer, with 104 flights available across nine destinations. The smallest airports in the airline’s network, based on weekly seats, are Saskatoon and Prince George, which each enjoy four weekly departures. 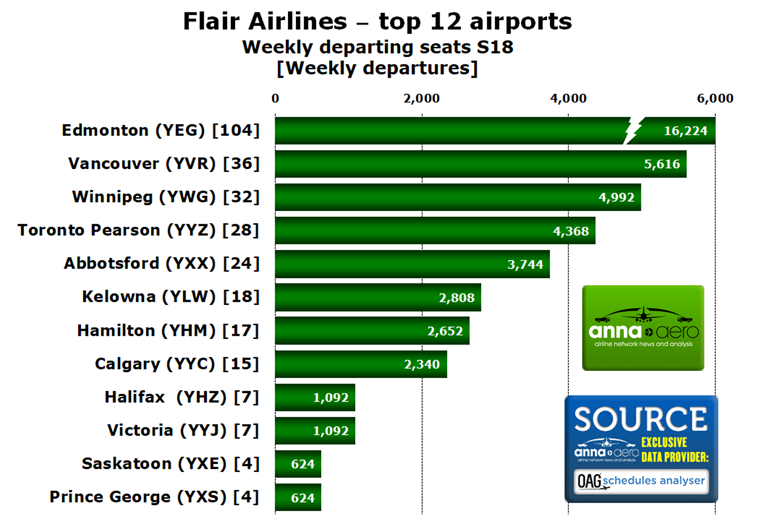 Flair will offer 46,176 weekly seats across its network during the week commencing 31 July, a significant 393% increase compared to the equivalent week in S17. Last summer the airline only operated from five Canadian airports, with Hamilton the number one departure point, while Edmonton was only its third busiest. The five airports that had services last year have all seen growth, with Edmonton unsurprisingly enjoying the biggest increase in seats and flights (both up 700%). The new airports in the airline’s scheduled network this summer are Vancouver, Toronto Pearson, Kelowna, Calgary, Victoria, Saskatoon and Prince George.

Flair is scheduled to operate 17 routes during peak S18 with weekly frequencies ranging from two to 24. The average frequency across its network is nine flights per week, with only six airport pairs seeing 10 or more weekly departures. It will face direct competition on all of its top 12 sectors in S18. The airline’s largest route is the 772-kilometre Edmonton to Abbotsford connection on which it provides 24 weekly services. This includes four daily flights on Thursdays, Fridays, Sundays and Mondays, with three departures on Tuesdays and Saturdays and two on Wednesdays. This is one of three routes (highlighted in pink) on which Flair will directly compete with ULCC rival Swoop during the week commencing 31 July. The others are Hamilton-Winnipeg and Edmonton-Hamilton.

Swoop isn’t scheduled to launch Edmonton-Abbotsford until 25 July. When it does commence operations on the route, it will offer 21 weekly flights, three fewer than Flair. However, Swoop’s use of larger 737-800s means that it could still offer up to 225 more weekly seats on the route, assuming its aircraft accommodate 189 seats and Flair’s 737-400s accommodate 156. On the two other competing sectors, Flair will provide 12 weekly flights between Hamilton and Winnipeg, seven more than Swoop, while the latter will offer seven weekly services between Edmonton and Hamilton, two more than Flair. Using the same aircraft configuration assumptions as before would result in Flair having a capacity advantage of 927 weekly seats between Hamilton and Winnipeg, with Swoop holding a 523-seat lead on the Edmonton to Hamilton route.  Swoop’s other two routes are Hamilton-Abbotsford and Hamilton-Halifax and neither of these, nor the Winnipeg-Abbotsford sector it plans to introduce in August, are operated by Flair. 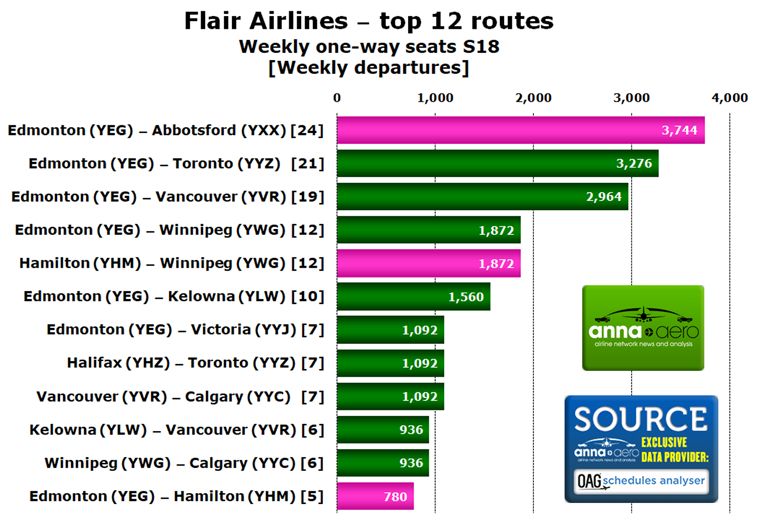 Edmonton is the origin point for seven of Flair’s top 12 routes and nine of its 17 total airport pairs in S18. During the equivalent week in S17 the airline only operated six routes, with Hamilton-Winnipeg its busiest sector. Since then the airline has dropped services between Hamilton and Halifax and from Winnipeg to Abbotsford, but it has introduced 13 new routes. Three of the four surviving airport pairs from S17 have witnessed a significant increase in capacity this year, including its largest route from Edmonton to Abbotsford (380%). The only surviving sector to maintain the same frequency and capacity as last summer is Edmonton-Hamilton.

More competition on the horizon

There is no time for Flair or Swoop to rest on their laurels with proposed start-up Canada Jetlines expected to begin operations in 2019, after announcing recently that its first two leased aircraft are due for delivery in the first half of next year. Canada’s third potential ULCC has posted a series of routes maps on its website indicating its planned network expansion. Its start-up network suggests an initial focus on flights from Hamilton, with services to Abbotsford, Edmonton, Calgary, Winnipeg and Halifax. If this was the case, Canada Jetlines would compete directly with Flair and Swoop on the Edmonton and Winnipeg links and would also go head-to-head with Swoop on services to Abbotsford and Halifax. With Flair and Swoop also likely to continue launching routes in the near future, anna.aero is the best place to keep up-to-date with Canada’s expanding ULCC connections. 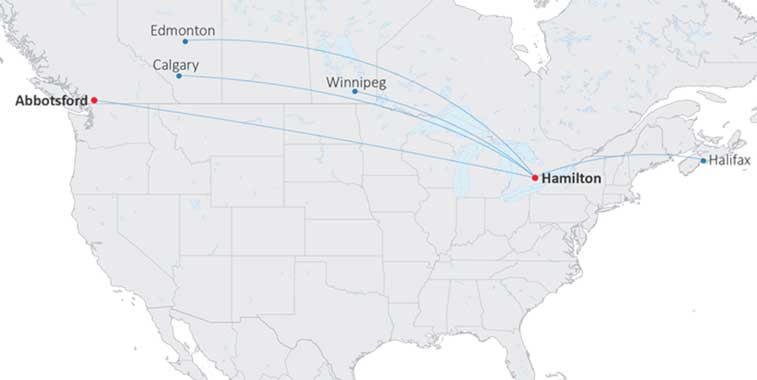 Canada Jetlines’ proposed start-up route map suggests its initial focus would be on flights from Hamilton with services to Abbotsford, Edmonton, Calgary, Winnipeg and Halifax. It would compete directly with Flair Airlines and Swoop on the Edmonton and Winnipeg links and would also go head-to-head with Swoop on services to Abbotsford and Halifax. Canada’s third proposed ULCC plans to begin services in 2019. Source: Canada Jetlines.