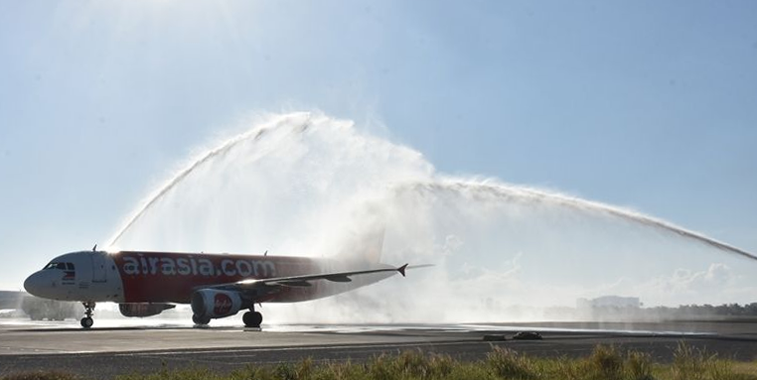 Philippines AirAsia launched flights between Cebu and Shenzhen on 9 May, with the inaugural flight being sent off with a water arch baptism before departing for the Chinese city. Last year the AirAsia Group carrier transported just under 4.8 million passengers, with 28% of these travelling on international services, up from just 13% back in 2012. Last year marked the first in which the airline transported more than one million international customers.

AirAsia Group’s operation in the Philippines is known as Philippines AirAsia. The carrier (IATA code Z2) started life as Zest Air before becoming part of the AirAsia family and being rebranded as AirAsia Zest. The airline assumed its current name in January 2016. The LCC currently operates a fleet of 20 180-seat A320s, with the latest having joined the fleet in April this year. This is up by four units from the 16 A320s that were in the fleet during the same month last year.

Philippines AirAsia carried just under 4.8 million scheduled passengers in 2017, a result 34% greater than the 3.6 million it transported in 2016, with these figures based on data obtained from the Republic of the Philippines Department of Transportation Civil Aeronautics Board (RPDTCAB). Of all travellers last year, 28% (1.36 million) flew on international services, a market share which has risen from just over 13% back in 2012. Over the period 2009 to 2017, just one year encountered a drop in traffic, with passenger numbers falling 3.2% in 2014, with this decrease being in the domestic sector. 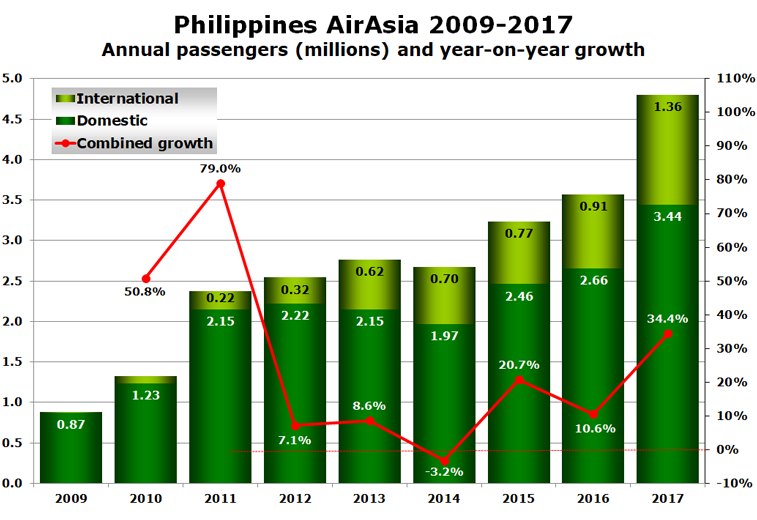 Source: Republic of the Philippines Department of Transportation Civil Aeronautics Board (RPDTCAB).

In Q1 2018, Philippines AirAsia carried 1.48 million passengers according to RPDTCAB. This represents approximately 31% of the total traffic that the airline flew in the whole of 2017. With that in mind, the carrier can expect to fly 24% more passengers in 2018, that is if it maintains the 31% proportion of last year’s traffic in all four quarters. This means the airline could carry around 5.95 million passengers in 2018. On top of that, with OAG Schedules Analyser data indicating that the airline’s seat capacity is expected to grow by 45% this year alone, it suggests that traffic growth may outperform the near six million passenger forecast calculated by anna.aero.

Clark flies up the board with base opening

As a result of Clark becoming a base for Philippines AirAsia in April, it has risen up the rankings in the carrier’s top airports list, moving from 14th last year to eighth in 2018. Based on OAG schedules, it appears that the LCC has based two aircraft at the airport situated around 90 kilometres from Manila city centre. This investment by the carrier has resulted in it growing annual seat capacity from the airport by over 457% this year. It should be noted that the airport was a base for AirAsia Zest between 2012 and 2013.

Another airport to see a healthy capacity increase is Ilo Ilo, with its seat offering with Philippines AirAsia expanding by just over 427% in 2018. The airline started flying to Ilo llo on 1 October last year with a three times daily service from Manila, and since then it has added a fourth daily rotation, plus a three times weekly service from its new Clark base. Overall, it is still Manila which is by far Philippines AirAsia’s leading hub, with it accounting for 39% of the carrier’s departing seat capacity this year. In total 10 of Philippines AirAsia’s top 15 airports are domestic cities, with five (highlighted in light green) being international destinations, and the leading non-Philippine scheduled airport being Seoul Incheon (ninth largest). 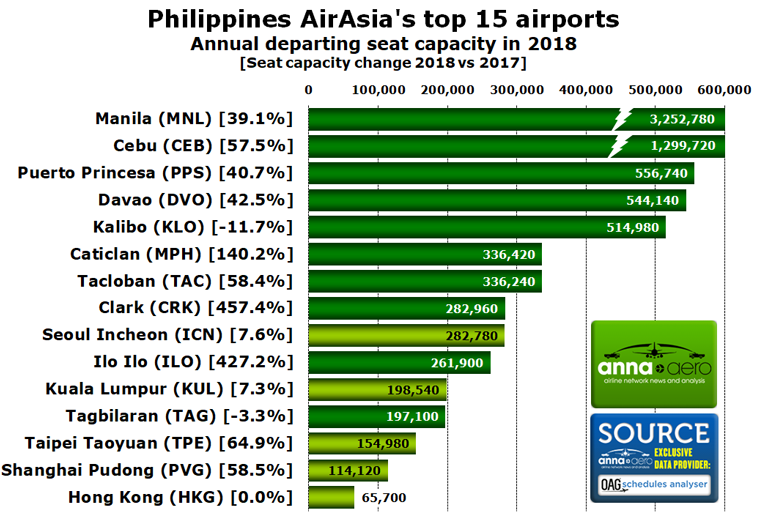 One airport which has not done so well for Philippines AirAsia this year is Kalibo, with the carrier reporting close to a 12% cut in annual seats from the facility. However, it is reported that Philippines AirAsia has temporarily suspended some services to the airport due to the decision by the Filipino Government to temporarily close most of the resorts on Boracay Island. As a result, it has added more flights to Cebu, Davao, Palawan, Bohol, and Ilo Ilo to utilise the capacity.

Philippines AirAsia has introduced two new country markets to its network this year – Indonesia and Thailand (highlighted in light green). The carrier inaugurated daily flights between Manila and Jakarta on 9 January, while a route from the capital to Denpasar on the island of Bali began 10 days later. As a result of its investment in the Indonesian market, it has become Philippines AirAsia’s sixth largest market this year. Thailand was introduced to the network a couple of months later on 22 April, with the carrier launching a daily service from Manila to Bangkok Don Mueang. Thailand is presently Philippines AirAsia’s 10th largest nation. The domestic market is by far the largest for the airline, accounting for 86% of departing seat capacity this year, up from 85% in 2017. 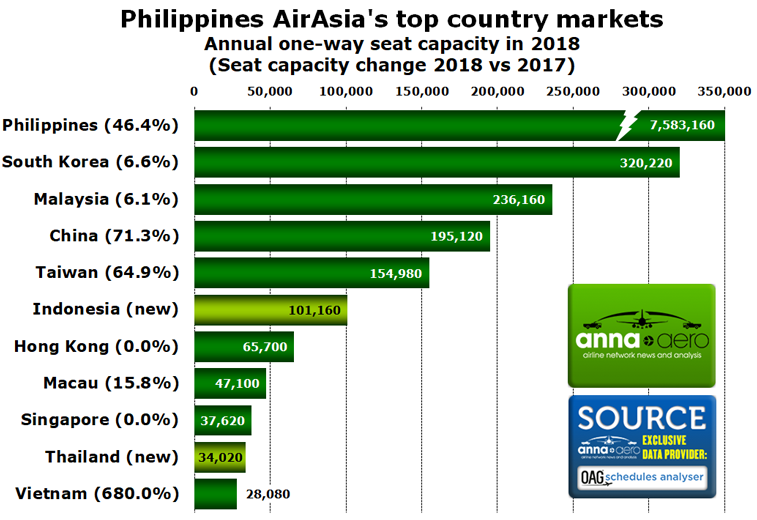 It should be noted that the reason for Vietnam seeing a 680% growth in capacity is due to 2018 being the first full year of operations for the airline in the market, with it having launched a three times weekly service between Manila and Ho Chi Minh City in November last year. One market in particular which has seen heavy investment from Philippines AirAsia is China, with the airline having launched three new routes from Cebu to Shanghai Pudong (daily; launching 7 July), Hangzhou (twice-weekly) and Shenzhen (daily) this year. The carrier has also added frequencies to its existing routes from its home market to the nation. Interestingly no markets have seen capacity cuts this year. Overall, international seat capacity from Philippines AirAsia has risen by 39% in 2018 compared to last year. 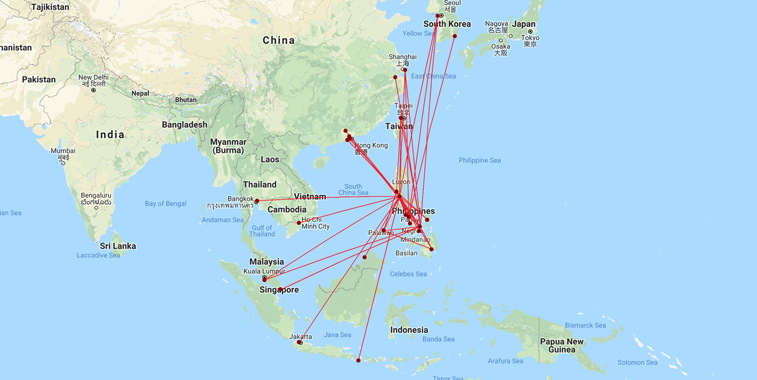 Philippines AirAsia has added two new country markets to its network in 2018, namely Indonesia and Thailand. The carrier has also increased capacity on a number of its international sectors, particular China which has encountered a 71% rise in capacity from the carrier, helped by the airline launching three routes from Cebu to Shanghai Pudong, Hangzhou and Shenzhen. In total international seat capacity with Philippines AirAsia has risen 39% in 2018 versus 2017.