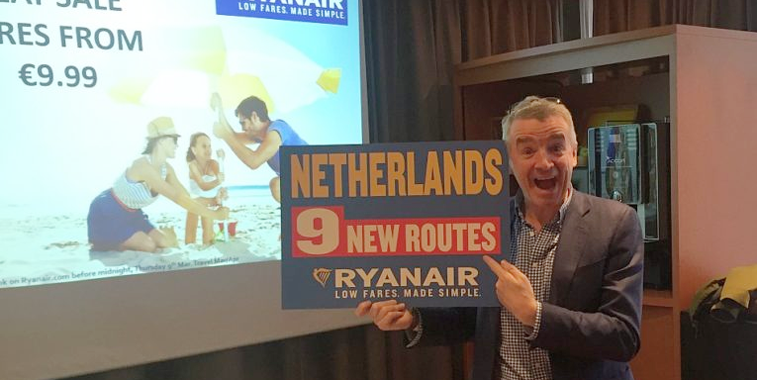 Last year Ryanair CEO Michael O’Leary was in Eindhoven to announce nine new routes from the airport as part of its W17/18 expansion. LCC annual seat capacity from the Netherlands has grown by over 170% between 2008 and this year, while airlines with other business model have reported an average growth rate of 31%. It means that during the last decade, LCC capacity from the Netherlands has grown five times faster than that of other carriers. Ryanair’s expansion from Eindhoven has certainly helped the airport, with it reporting a 19% rise in passenger traffic last year versus 2016.

The Netherlands, home to tulips, clogs, and for those who know the aviation route development circuit well, the stroopwaffel (anna.aero’s data elves having a number of Amsterdam Schiphol-branded stoopwaffel tins on their desks. They make great pen holders!). With 76.20 million passengers passing through airport terminals in the Netherlands last year, the market is certainly robust given its size. While it is home to Amsterdam, Europe’s third largest hub, only 37% of the traffic that passed through the facility last year was transiting, meaning the airport was home to 43.09 million O&D passengers in 2017. Taking those figures out of the total traffic (given minimum transit traffic at the nations other airports), it means there was 50.89 million O&D passengers in the Netherlands last year. Given that the population of the Netherlands is just over 17 million people, it means that last year there was on average just under three O&D passenger movements in the country per head last year.

Handling 68.40 million passengers in 2017, Amsterdam is by far the Netherlands’ leading airport, with it seeing its traffic grow by 7.7% last year (4.87 million additional passengers) when compared to 2016. However, one airport in the country outperformed the European mega-hub, with Eindhoven reporting a 19% surge in passenger numbers, growing beyond the five million passenger barrier, to register 5.70 million customers passing through its terminal in 2017.

The number of people processed through the country’s airports in 2017 was 87% greater than it was in 2000, a year when the nation handled 40.77 million air travellers. During the period analysed, only three years have witnessed traffic declines, with the worst, and last, being in 2009 when numbers fell 7.9% from 50.3 million passengers in 2008 to 46.46 million that year. As noted in the graph below, traffic growth has been stable during the past few years, with the average yearly growth rate in traffic since 2009 being 6.4%. 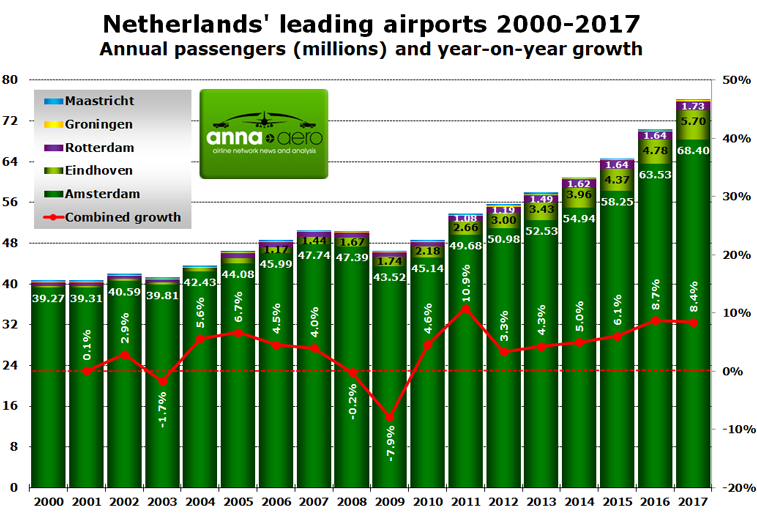 Despite Amsterdam’s clear domination of the market, as indicated in the graph above, what is interesting to note is that its market share of Dutch passengers has declined from a peak of 97% in 2004 to just under 90% last year, the first time that its market share has fallen below the 90 percentage point barrier this millennium. Again, due to its impressive growth since 2000, Eindhoven has seen its market share climb from a low of 0.7% in 2001 to a healthy 7.5% last year, the first time it has moved beyond the seven percentage point barrier. Overall, Eindhoven has seen its annual traffic between 2000 and 2017 grow by 1,574%. Elsewhere in the market, Rotterdam’s market share in 2017 was 2.3%, having peaked at 2.7% in 2014. Groningen achieved a market share of 0.3% last year, with it moving back and forth between 0.2% and 0.3% since 2000, while Maastricht is also at a 0.2% share, although it peaked at 0.9% in 2000 based on traffic numbers obtained from Statistics Netherlands.

This year some 25.85 million low-cost seats will be flown from the Netherlands, 170% greater than the 9.59 million seats on offer in 2008. Other carriers (full service, regional, leisure etc.) during the same period have seen seat numbers grow from 49.56 million to 65 million, representing a 31% rise. It means that the low-cost market has grown 5.45 times faster than other airlines in the Netherlands during the past 10 years, allowing it to increase its market share from just over 16% in 2008 to a little under 29% this year. 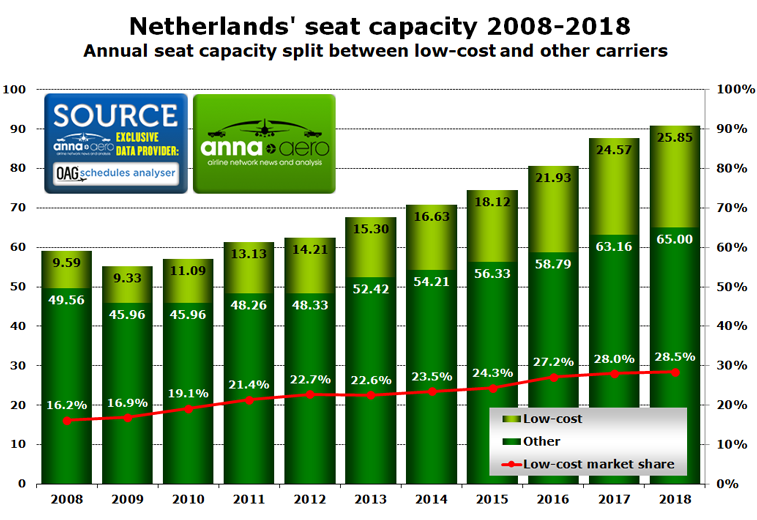 Currently easyJet has a base in Amsterdam, which opened in March 2015, with the LCC having started operations from the airport in 1996 with flights from London Luton. Ryanair established a base at Eindhoven in 2012, and based on OAG schedules, it presently has four based aircraft at the airport, with around 62% of the carrier’s daily rotations from Eindhoven being flown on away-based units (based on data for 17 July 2018). However, the Netherlands’ biggest based LCC is Transavia, with it accounting for 37% of low-cost seats from the country this year, with second-placed easyJet holding a 25% share of the LCC market.

KLM: not to be messed with

KLM has certainly made sure that it keeps its dominance over the ever-growing power of low-cost airlines. It is scheduled to grow seat capacity by 3.1% this year, not too far off the growth rates of easyJet, Ryanair and Vueling. While Transavia has increased its capacity at over twice the growth rate of KLM (6.3%), it must be remembered that the LCC is a wholly-owned subsidiary of the Air France-KLM Group. The best growth among the LCCs has come from Wizz Air, with it having expanded its seat capacity from Eindhoven, the only airport it serves in the Netherlands, by 7.8%. The carrier will add new routes from the airport to Iasi and Vienna over the coming weeks according to anna.aero’s New Routes Database. 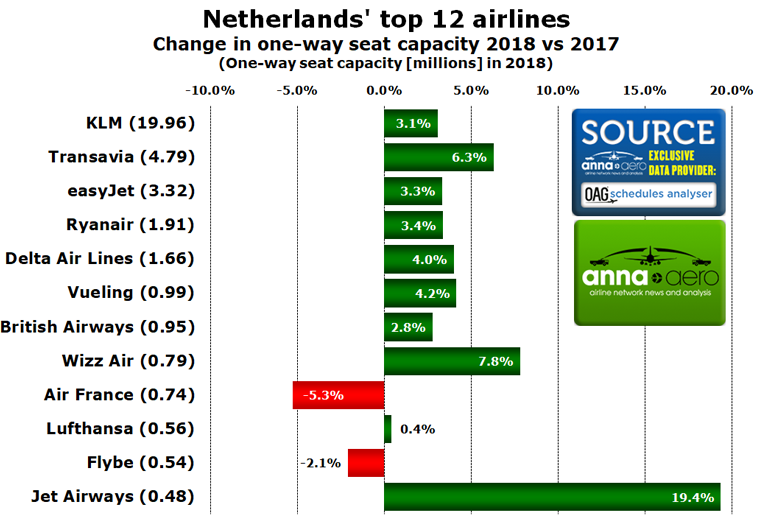 One carrier which has made inroads into the top 12 is Jet Airways, adding over 19% more seats in 2018 versus last year. This is as a result of it adding new flights from Bengaluru, while also providing 777-300 capacity on its existing services from Delhi and Mumbai, having previously flown the routes on A330s. At the other end of the spectrum, Air France has chopped capacity by 5.3%, while Flybe has scaled back its seat offering by 2.1%, with the UK market expected to be cut this year, as detailed below.

Based on OAG Schedules Analyser data, the Netherlands’ top country market – the UK – will see its seat capacity reduce by a mere 0.1% in 2018 if airline schedules remain unchanged. Of the country’s top 20 markets, four are not in Europe, namely the US (third), China (16th), UAE (19th) and India (20th). One market which has seen a sizeable increase is the US, with the number of departing seats from Amsterdam, the only long-haul airport in the country, up by over 250,000 in 2018 when compared to last year. Overall, the top 20 markets are reporting an average growth rate of 6.4% this year. 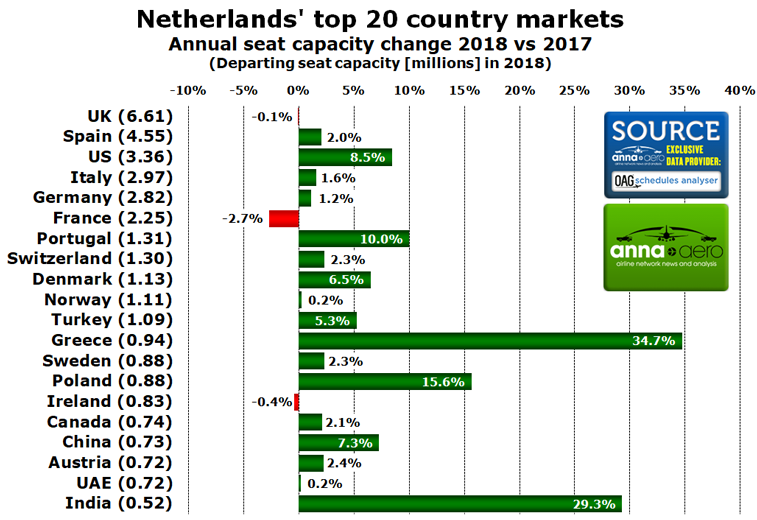 One nation which is showing significant growth this year is Greece, with seat capacity increasing by nearly 35%. This is the result of frequencies increases by existing carriers, while eight new routes have been opened up between the two nations since S17, including Corendon Dutch Airlines adding flights from Amsterdam to Samos, plus three new services from Maastricht to Kos, Rhodes and Zakinthos. Ryanair has introduced services from Eindhoven to Thessaloniki, with a route to Athens starting in September, while Transavia has welcomed flight to Heraklion from Rotterdam and Groningen. 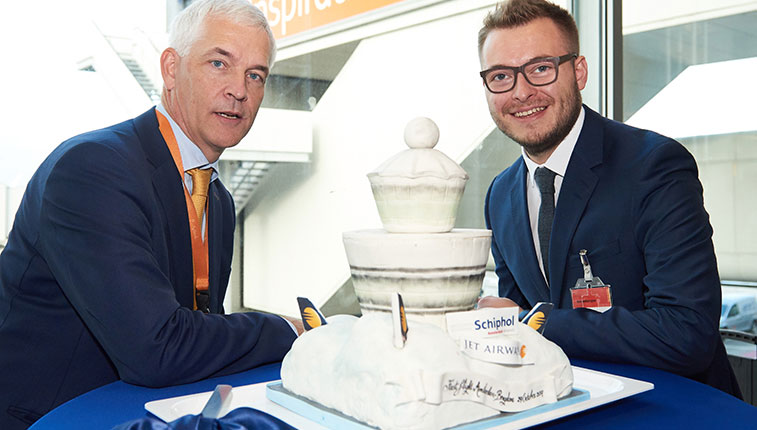 Back in October anna.aero was among the VIPs invited to attend Jet Airways’ inaugural flight between Bengaluru and Amsterdam, which also meant it was time for cake. Pictured with the route launch bake are Amsterdam’s Director of Aviation Marketing – Asia, South America, Africa, and Middle East, Wilco Sweijen and anna.aero Assistant Editor Jonathan Ford. Overall the Indian market has grown by over 29% in 2018, with Jet Airways’ seat capacity up by 19%.