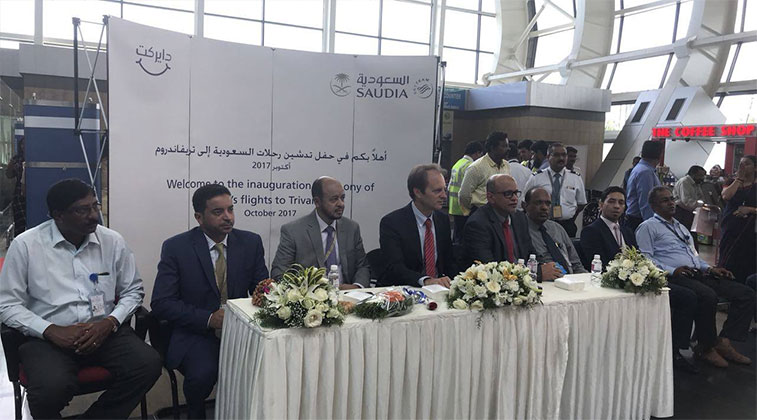 In October last year Thiruvananthapuram Airport welcomed the start of flights from Saudi Arabian Airlines, as the Gulf carrier started a twice-weekly operation from Jeddah and a three times weekly service from Riyadh. The SkyTeam carrier became the 18th serving airline at the Indian airport, the country’s 14th busiest last year.

In 2017, Thiruvananthapuram Airport was India’s 14th busiest airport, handling around 4.2 million passengers. However, despite annual growth in excess of 10% above 2016 traffic levels, the airport actually slipped three spots down the rankings, having been leapfrogged by Guwahati (+31%), Jaipur (+24%) and Lucknow (+17%) during that 12-month period. Thiruvananthapuram has a scheduled non-stop network of 22 destinations, led by Bengaluru (8,798 weekly seats), Dubai (6,166) and Chennai (5,646).

The airport currently boasts 18 serving carriers in the week commencing 28 June. A year ago, it only had 17 airlines, with Saudi Arabian Airlines being the latest addition to the airport’s carrier portfolio. The SkyTeam carrier added a three times weekly service from Riyadh and a twice-weekly operation from Jeddah to the Indian city in October last year.

Despite being in one of the world’s fastest growing aviation markets, traffic throughput at Thiruvananthapuram has been stable and unremarkable alongside some of its more dynamic peers which are increasing passenger volumes at break-neck speed. That said, the airport will effectively have doubled in size since 2010 if traffic forecasts for 2018 are correct. Additionally, in two of the last eight years it has produced double-digit growth, in 2015 and 2017. 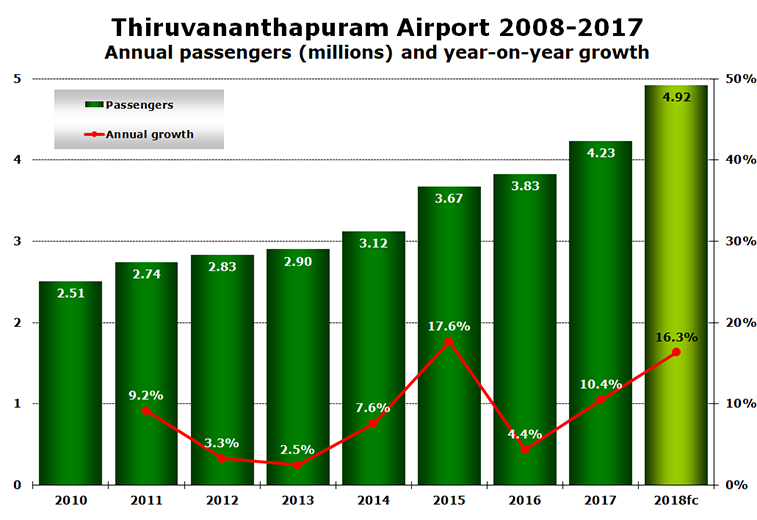 Weekly seats at Thiruvananthapuram have increased by 3.5% year-on-year, when compared to the same week in 2017. However when consulting the latest monthly data (January to April 2018) from Airports Authority of India, the airport has averaged 16% growth so far this year. So clearly airline loads have been rising to fuel this traffic increase. The 16% increase is just behind the national average for the country’s 57 busiest airports in that period, which is 20%. On this basis, if Thiruvananthapuram manages to maintain its current level of monthly traffic increases, then it could get close to breaking the five million annual throughput milestone for the first time in 2018.

When using anna.aero’s SVID calculator, Thiruvananthapuram delivers a score of 0.93, which means it gains an “Excellent” rating. Comparing this seasonal performance against those of its nearest domestic rivals – India’s 13th largest airport Lucknow and 15th largest Kozhikode – Thiruvananthapuram performs well. While both peer airports score an “Excellent” result, Kozhikode has the most seasonal traffic profile (scoring 1.03) of the three airports. Evidently, Thiruvananthapuram has slightly less year-round appeal than Lucknow, as the latter’s monthly passenger figures yield it a very healthy score of 0.59.

Click on to enlarge. Source: Airports Authority of India.

When looking at the 2015 and 2016 seasonality scores of Thiruvananthapuram’s monthly throughput, the airport has slipped back in terms of flattening the profile of its traffic. In 2015, the airport achieved a “Excellent” rating with a score of 0.60, and then improved on this in 2016 to deliver a result of 0.46, a tally it failed to improve upon in 2017. Looking forward to this year’s SVID score for Thiruvananthapuram, the anna.aero data elves are predicting a further peaking of its score, but that it will remain in the “Excellent” category, with an anticipated result of around 1.10.

Despite being the airport’s largest carrier, IndiGo is rapidly adding fresh capacity at the airport, increasing by 14% year-on-year. However, India’s biggest airline is not the fastest-growing carrier at Thiruvananthapuram, that accolade goes to Maldivian which has added 19% more seats over the last 12 months. The regional carrier’s extra weekly seats has seen it replace SpiceJet in the top 12 airlines, moving up from 13th spot. By contrast, the latter carrier has culled its capacity at the airport by 71% since last June, and accordingly its ranking has tumbled from sixth to 16th. Four airlines have maintained their respective weekly seats over the past 12 months – these were Air Arabia, Etihad Airways, Qatar Airways and Oman Air. 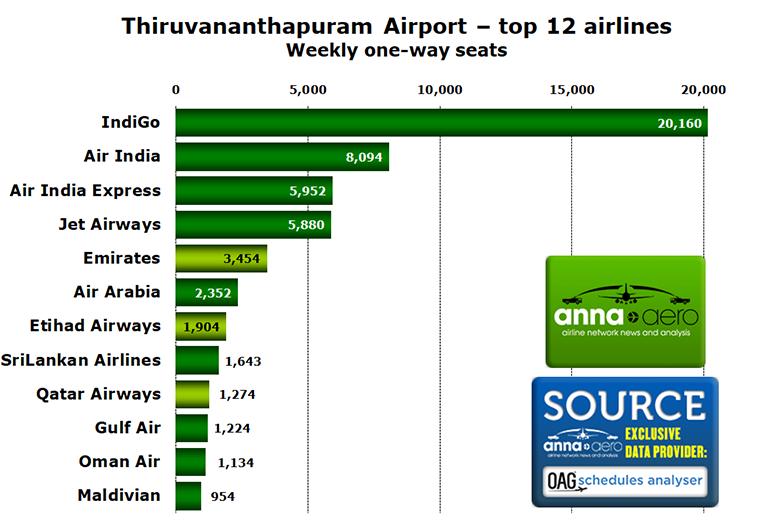 The MEB3 carriers (Emirates, Etihad and Qatar Airways), which are highlighted in light green in the above graph, presently command 11% of the total capacity at Thiruvananthapuram. If you add in the airport’s remaining serving carriers from the Gulf region – namely Air Arabia, flydubai, Gulf Air, Kuwait Airways and Oman Air – this share increases to 20%.

Over the last year, no new country markets have been added to the airport’s offer, yet there has been plenty of positive change in many. The importance of the domestic market continues unabated, commanding 47.7% of weekly seats, down marginally from 47.9% a year ago, in spite of a 3.1% rise in capacity. Saudi Arabia has recorded the largest annual hike in weekly seats, with 60% more available, ahead of Singapore (+35%) and Qatar (+26%). 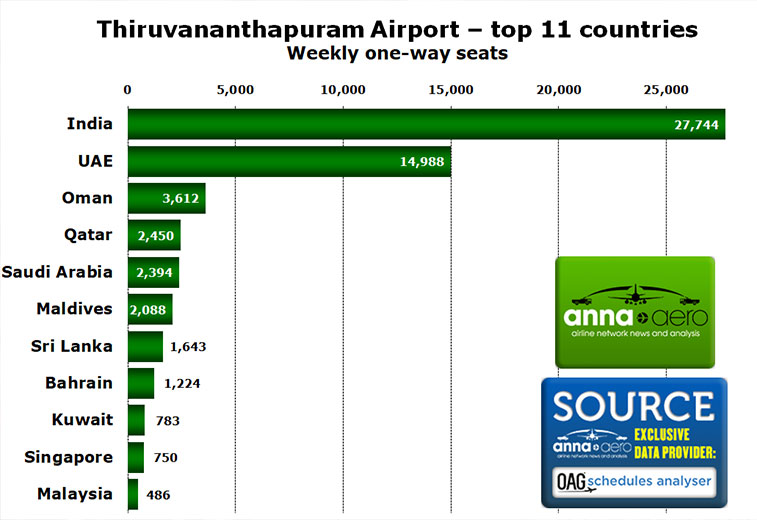 Only two markets provided a negative figure for weekly seat growth, those being the second largest country market UAE (-0.4%) and the Maldives (-20%). The latter’s decline meant that it fell from fourth to the sixth biggest country market in the same week of 2018. Both Oman and Kuwait observed no change in their respective weekly capacities.

No new routes planned at the moment

Looking ahead to the remainder of S18, W18/19 and beyond, Thiruvananthapuram has no new routes planned, according to anna.aero’s New Route Database. This is slightly mystifying in a dynamic market like India, when many other airports are set to welcome plenty of new services and delivering robust double-digit growth. Should Thiruvananthapuram’s sluggish route development in 2018 suddenly spark into life, you will find out here first. 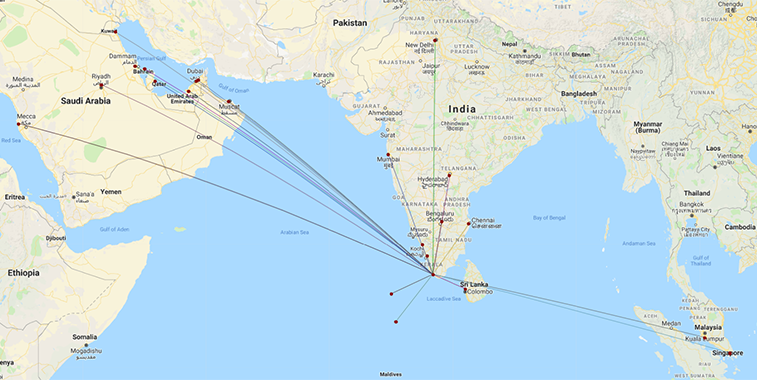 The importance of the Gulf region to Thiruvananthapuram Airport’s network is laid bare in this map. While the airport is connected to seven domestic destinations it has services to 10 cities in the Middle East. The region’s carriers also command 20% of weekly seats. It also hosts routes to Kuala Lumpur and Singapore.