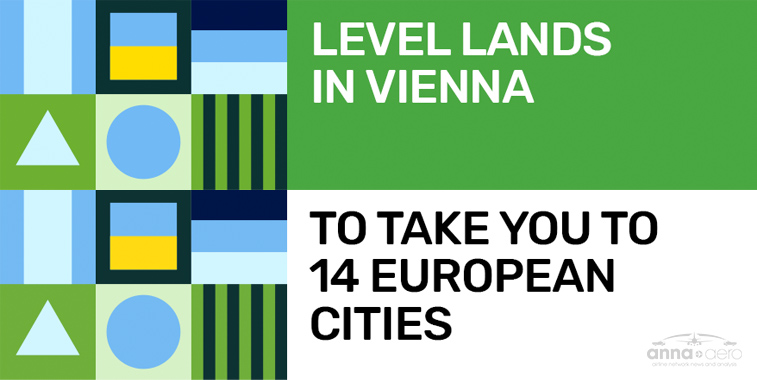 This is what greets all travellers clicking on LEVEL’s website today, news of the IAG carrier’s latest base, this time a short-haul operation from the Austrian capital city. All 14 new routes will have started in less than six weeks time, with the first two, Palma de Mallorca and London Gatwick, beginning as soon as 17 July. All of the new city pairs will face direct competition.

LEVEL has thrown its considerable IAG-backed hat into the increasingly crowded LCC ring at Vienna Airport, announcing 14 new short-haul routes from the Austrian capital city, with some beginning in just over two weeks time. The interesting point to note here is the use of the LEVEL brand for intra-European sectors, rather than its existing short-haul LCC daughter company Vueling. It is unclear at this stage whether LEVEL is considering Vienna as a potential base for its long-haul operations. All LEVEL European flights from Vienna will be operated by four based 210-seat A321s.

On selected routes (Barcelona, Malaga, Palma de Mallorca, Paris CDG and Valencia), LEVEL services will be operating under VK-coded flight numbers, instead of Vueling’s VY-coded flight numbers (remaining nine routes). When trying to book Malaga flights on the LEVEL website for example, potential passengers are currently redirected to the Vueling home page and some of the flights are then labelled as being operated by Anisec (which will presumably be using the VK code), which is the name of the Austrian subsidiary set-up by IAG using a Austrian Air Operator’s Certificate.

Such is the size of the move by LEVEL, it will immediately become the third largest airline at Vienna, behind only Austrian Airlines and Eurowings, moving ahead of LCC incumbents easyJet (now fourth largest carrier), Laudamotion (seventh) and Wizz Air (eighth) which itself has just opened a base at the airport, basing its first of five aircraft. IAG stable mate Vueling (both carriers are highlighted in light green) will slip down to being the airport’s ninth largest airline. The two family member carriers combined will offer close to 24,000 weekly seats at the Austrian hub, assuming that Vueling will not trim its existing capacity when LEVEL gets underway at Vienna. 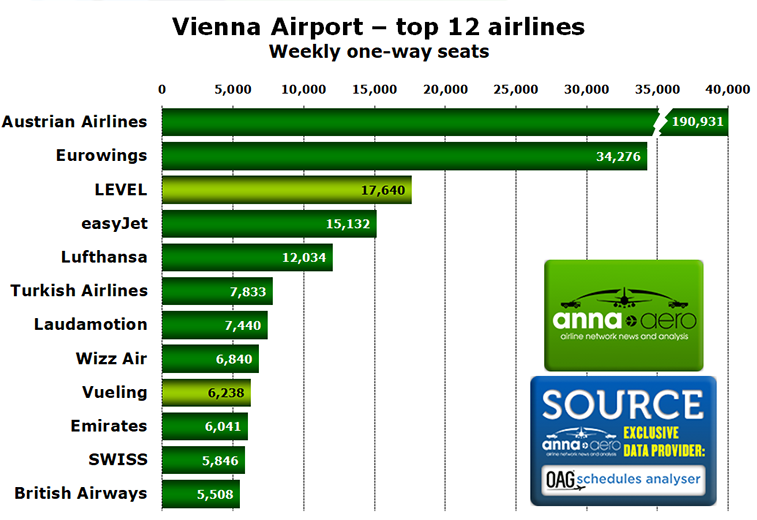 Interestingly, Vueling already flies four routes into Vienna – namely Rome Fiumicino (10 times weekly), Barcelona (twice-daily), Paris CDG (five weekly) and Palma de Mallorca (four weekly). As the latter three routes are among LEVEL’s new services from the Austrian capital city, it is unclear at this point whether services to all three destinations will be maintained by the two family member carriers in the medium term.

In total LEVEL will offer 84 weekly flights from Vienna, resulting in an average weekly frequency per route of six, ranging from its 13 times weekly operation to London Gatwick, down to Alicante which will only be operated twice-weekly. Each of the 14 airport pairs will face direct competition, with eight encountering more than one incumbent carrier. The most intensive route, in terms of competition, will be the 1,038-kilometre sector between Vienna and Paris CDG, with three airlines offering a combined 52 weekly frequencies, namely Austrian Airlines, Air France and Vueling.

There are eight different competing airlines across this basket of services, with Eurowings and Austrian Airlines perhaps having the most concern about LEVEL’s arrival in Vienna, as both will be battling it out with the IAG LCC on half of the freshly introduced capacity.

Currently, Vienna has a network of 181 direct non-stop destinations, according to OAG schedule data for w/c 2 July. The 14 routes selected by LEVEL, while not adding to this route tally, are well spread across these 180-plus existing airport pairs, ranging from Paris CDG, seventh biggest route in terms of weekly capacity, to Bilbao, which was joint 159th biggest route in terms of seats before LEVEL’s announcement. 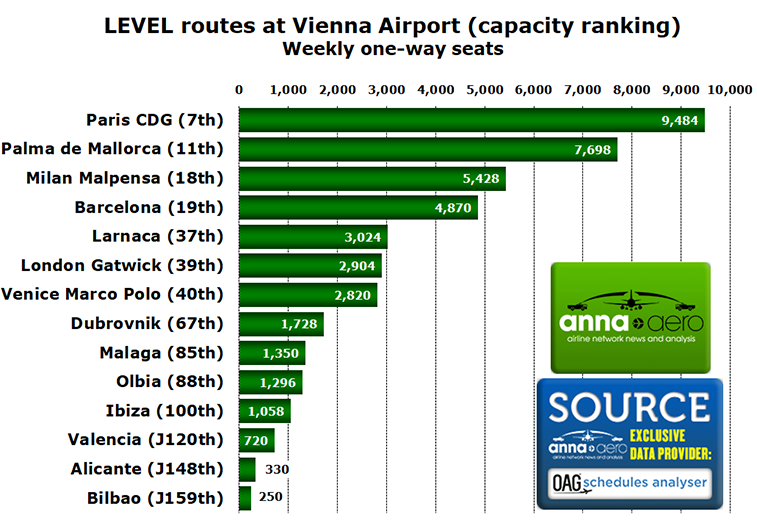 The top three routes at Vienna in terms of weekly seats are Frankfurt (15,618), Berlin Tegel (13,116) and Zurich (13,012). When total city markets are considered, then London would significantly move up to top spot in the rankings with (15,826 weekly seats) spread across existing services to Gatwick, Heathrow, Stansted, Luton and Southend. The market size would help to partially explain why LEVEL has added a double-daily operation to the UK capital, as well as the high weekly frequencies to Paris CDG and Milan Malpensa. In terms of where LEVEL may venture next from Vienna, anna.aero will bring you all the news and analysis, as usual. 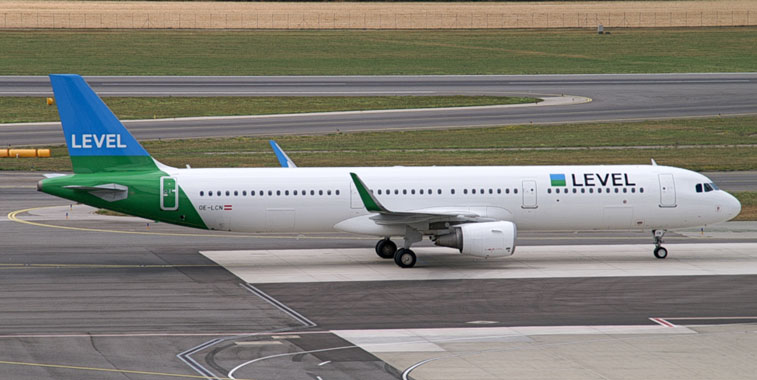 Pictured on the ground in Vienna is OE-LCN, the first aircraft to be registered to Anisec, the name of the Austrian subsidiary set-up by IAG using a Austrian Air Operator’s Certificate, with the A321 branded in LEVEL’s livery. The airline’s new operations from Vienna will require four A321s, with it initially opening 14 routes from the Austrian capital.