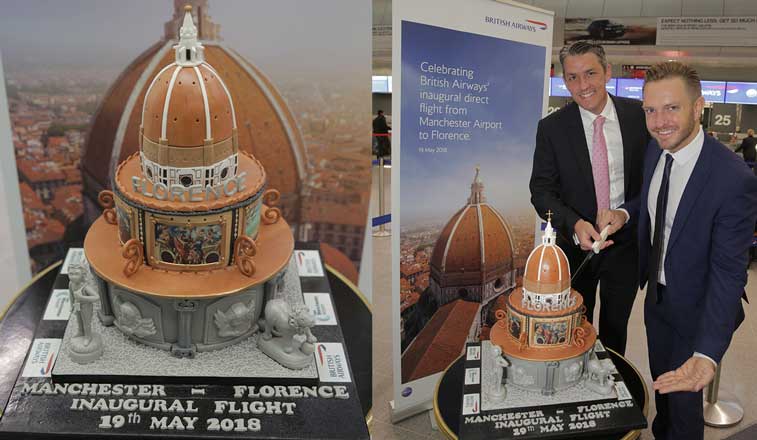 British Airways is the third largest provider of capacity between the UK and Italy after Ryanair and easyJet. The British flag carrier provided more than four million two-way seats in the country pair in 2017. On 19 May it introduced a new route from Manchester to Florence. Stephen Turner, Commercial Director, Manchester Airport and Luke Hayhoe, GM Customer and Commercial, BA CityFyer cut the cake to celebrate.

From 2008 to 2017 the available capacity between the UK and Italy grew from 13.43 million seats to 17.38 million, which is equivalent to a 29% increase. The market faced almost inevitable cut backs at the height of the global economic downturn, with seat numbers falling by 4.7% in 2009 with a further, smaller reduction occurring in 2010. There was a return to growth in 2011 and 2012 before more cuts in 2013 saw seat numbers dip to 12.80 million. Since then, the UK – Italy country pair has enjoyed four consecutive years of growth with capacity increasing by 36% from 2013 to 2017. During this period the largest annual spike in seats occurred in 2016, with capacity up by 14% on 2015 numbers. A significant proportion of the 2016 increase came from the expansion of services by the low-cost heavyweights Ryanair and easyJet. 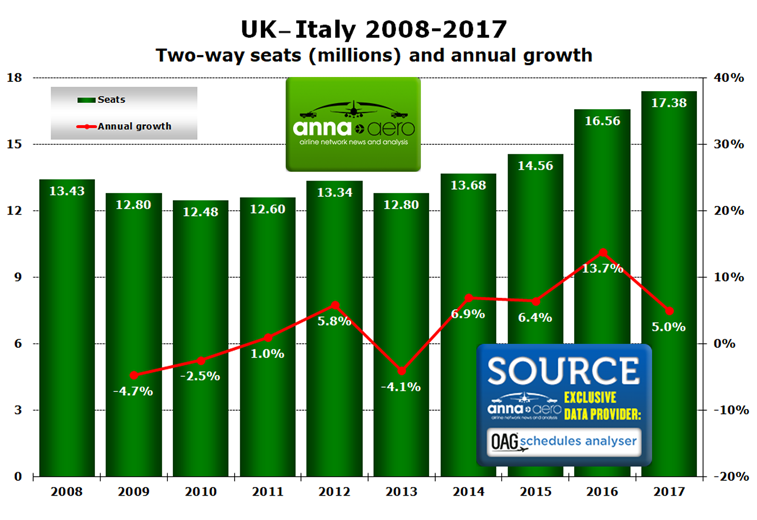 The average capacity on flights between the UK and Italy increased marginally from 160 seats in 2008 to 164 in 2017. Narrow-body aircraft are the main types employed on this country pairing, accounting for 93% of all seats flown last year. The proportion of seats operated by regional aircraft increased slighty from 2008 to 2017, with those types now accounting for 5.6% of the market. The largest operators of regional aircraft between the UK and Italy in 2017 were Alitalia (operated by its regional subsidiary Alitalia CityLiner), British Airways (operated by BA CityFlyer) and Flybe, with all three airlines using variants of the Embraer E-Jet family.

A tale of three cities

The top 12 airports in the UK – Italy country pair in 2017 included eight in Italy and four in the UK. This analysis considers there to be four main hubs in the market: London Heathrow and Gatwick in the UK and Rome Fiumicino and Milan Malpensa in Italy. These airports accounted for four of the top five positions in the table, and seven of the market’s 12 largest routes arrive or depart from one of them. The highest ranked non-hub airport was London Stansted, which offered the second most departing seats in the market. Eight of the top 12 airports serve just three cities between them: London, Rome and Milan. Together these eight airports accounted for 59% of the available seats between the UK and Italy. Gatwick was the single largest airport for departing seats in this country pair in 2017, with 18 Italian airports served. Its biggest Italian routes linked the London airport with Venice Marco Polo, Fiumicino and Malpensa. The only UK airport outside London in the top 12 was Manchester, which finished in eighth position. 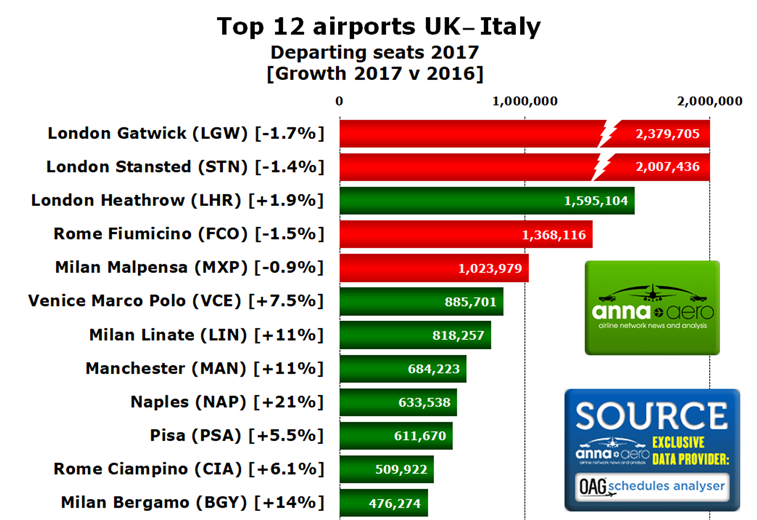 Eight of the top 12 airports experienced an increase in departing seats in the UK – Italy country pair last year. The strongest increase came at Naples (21% growth), which benefited from an increase in LCC capacity from easyJet and Jet2.com, plus the introduction of services by Ryanair. Four of the top-ranked airports witnessed cuts in capacity (highlighted in red). These were all marginal, with the most substantial coming at Gatwick where seat numbers were down 1.7% compared to 2016. The only difference in the airport rankings in 2017 compared to the previous year was Naples overtaking Pisa for ninth position, due to its superior year-on-year growth.

During the period 2008 – 2017, non-hub airports accounted for more departing seats between the UK and Italy than the market’s four mega hubs combined. Departing capacity from non-hubs grew from 8.79 million seats in 2008 to 11.01 million in 2017, an increase of 25%. In comparison, the departing seats available from the four hub airports grew from 4.64 million to 6.37 million, representing an increase of 37%. The market share held by non-hub airports subsequently experienced a marginal reduction from 65% of seats in 2008 to 63% in 2017. The fact that non-hub airports provide more departing capacity in this market will, in part, be due to the influence of point-to-point LCC operations between the UK and Italy. 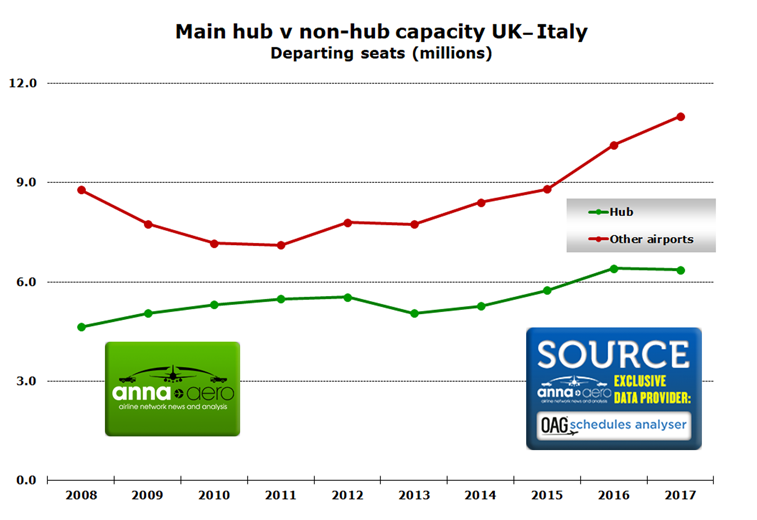 According to OAG schedules, 19 different airlines operated at least one scheduled service between the UK and Italy in 2017. The top 12 included seven British- and two Italian-based carriers. The remaining three carriers (Ryanair, Vueling and Blue Air) operate in this market under seventh freedom rights. In total, five of the top-ranked carriers were LCCs, with the remainder made up of a single regional operator, plus three full-service and three leisure carriers. The five LCCs accounted for 63% of the total capacity in the market in 2017. The three largest airlines for UK – Italy capacity were Ryanair, easyJet and British Airways and they dominated the market last year. Together this trio provided 80% of the available seats in 2017. The highest ranked Italian carrier was Alitalia, which offered just under one million seats in the market. 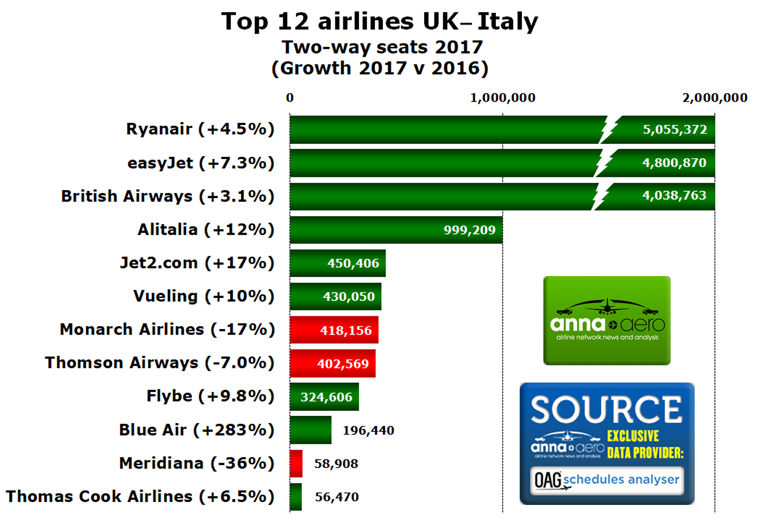 The majority of the top-ranked carriers for Anglo-Italian services enjoyed an increase in capacity last year. The strongest growth came from Blue Air with an increase of 283%. The Romanian LCC, which only entered the market at the beginning of S16, added two new routes from Liverpool to Milan Bergamo and Fiumicino in 2017. Three airlines (highlighted in red) saw a decline in seat numbers. Meridiana saw the biggest drop-off, with capacity down 36%. The Italian operator has since been re-branded as Air Italy but early indications are that the UK – Italy market is not a top priority for the new-look airline. Its seat numbers in the country pair for the week commencing 31 July are down more than 50% compared to Meridiana’s operation during the equivalent week in 2017. Monarch Airlines offered more than 400,000 seats in the market in 2017 before ceasing operations last October.

According to anna.aero’s New Routes Database, airlines have already introduced 25 new services between the UK and Italy in 2018, with another three scheduled to start before the end of the year. The next launch will be Ryanair’s link from Manchester to Palermo which is due to commence on 13 July. Of the 28 UK – Italy route launches identified for 2018, only three serve one of the market’s four mega hubs. The predominance of LCCs in this market looks set to continue with 21 of the 28 routes launched by carriers with that business model. 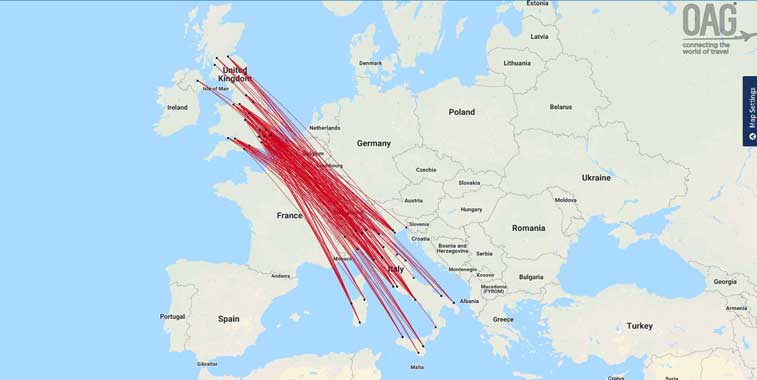 There were 17.38 million two-way seats available between the UK and Italy in 2017. This analysis considers there to be four main hubs in the market: London Heathrow and Gatwick in the UK and Rome Fiumicino and Milan Malpensa in Italy. Nearly two-thirds of seats departed from non-hub facilities last year, which might partly be a consequence of the predominance of the LCC capacity in this country pair.