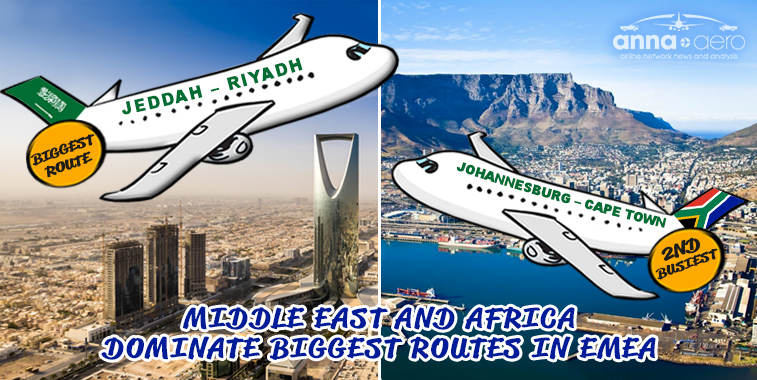 Europe accounts for 10 of the 12 largest markets in the EMEA region for departing seats in S18. However, the three largest routes are all domestic services in the Middle East and Africa. The biggest route based on available weekly seats in S18 is the domestic Saudi Arabian link from Jeddah to Riyadh, closely followed by two internal South African connections from Johannesburg.

In the second instalment of our peak summer regional review we take a look at Europe, the Middle East and Africa (EMEA). This revealed that the UK is the region’s biggest country market for departing seats and that European airports and airlines dominate the market in terms of available capacity. However, it is domestic services in the Middle East and Africa that top the route rankings, with the Riyadh to Jeddah sector taking the honours for the region’s busiest airport pair, ahead of two internal connections in South Africa.

There are 39.22 million weekly departing seats available from airports in the EMEA region in peak S18. This represents a 5.2% increase compared to S17. The EMEA airports therefore handle about 5.3 million more weekly seats (16% more) than those in the Americas and Caribbean region, which we analysed last week. About 75% of the departing capacity from EMEA airports is scheduled for domestic operations, although it should be noted one-way seats on internal services are counted in both directions, while international capacity to destinations outside of the EMEA region is only counted in one direction. The UK is the largest market in the region for one-way seats, just ahead of its Western European neighbours Spain and Germany. Nearly 3.8 million seats will be available from UK airports during the week commencing 31 July, which is equivalent to 9.8% of the region’s total capacity. UK airports will offer 3.2 million one-way seats on international services and nearly 580,000 on domestic links. 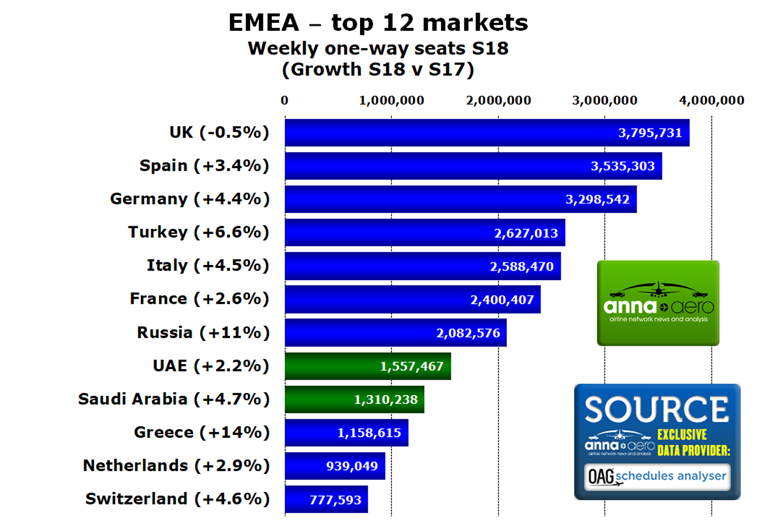 The top 12 country markets in the EMEA region include 10 in Europe (highlighted in blue), and two in the Middle East (highlighted in green). The biggest non-European market is the UAE, which occupies eighth position. The largest African market is South Africa, which is ranked 15th overall. Unlike the top markets in the Americas and Caribbean, which were largely dominated by domestic seats, the leading EMEA nations see most of their capacity operating on international links. In addition to the UK, eight of the other top 12 markets have more seats available on international flights than on domestic sectors. This is most extreme in the UAE and the Netherlands with 100% of the weekly departing seats from both nations operating to international destinations. The only top-ranked markets where domestic seats account for more capacity than international services are Russia, Saudia Arabia and Turkey. It should be noted that OAG data splits Russia between Europe and Asia. Only data for those Russian airports falling within the European zone are included here.

All of the top-ranked EMEA countries have witnessed an increase in capacity for S18 compared to the equivalent peak period last year, with the exception of the UK, which saw a marginal 0.5% reduction. The only difference in the top 12 rankings compared to S17 is that Turkey has overtaken Italy to claim fourth spot. The Turkish market has enjoyed a 6.6% boost in departing seat numbers this summer, thanks largely to an 11% growth in international capacity.

The dominance of Europe is backed-up in the EMEA airport rankings, with 11 of the 12 busiest airports in the region in S18 located in that continent. The only exception is Dubai, with the Emirates hub taking top spot. The top five includes Europe’s largest hubs, which anna.aero refers to as the FLAPI airports (Frankfurt, London Heathrow, Amsterdam, Paris CDG and Istanbul Atatürk). The highest-placed African departure point is Johannesburg in 37th position. International routes dominate departing capacity at most of the top-ranked airports. This is most extreme at Amsterdam and Dubai where all of the scheduled seats for the week commencing 31 July will be flown on international sectors. The top 12 airport with the highest proportion of domestic capacity is Moscow Sheremetyevo, with 40% of its departing seats scheduled to serve other Russian destinations. 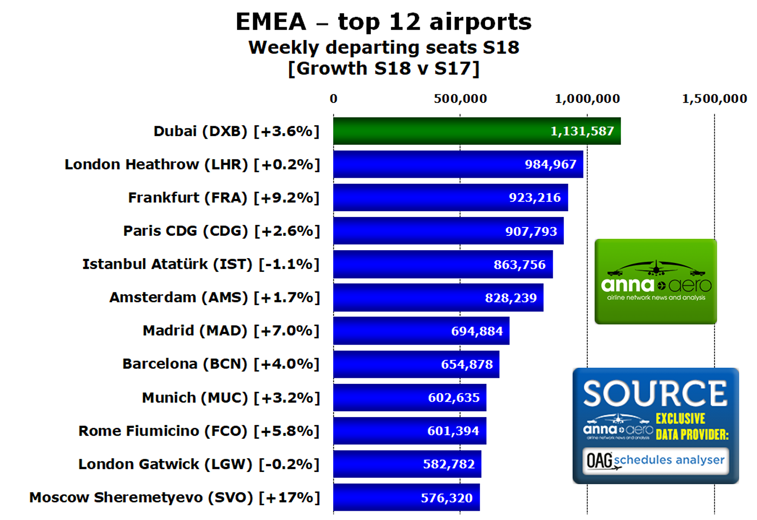 Ten of the top 12 airports witnessed an increase in departing capacity this summer compared to last year. The largest growth has taken place at Sheremetyevo and Frankfurt. Atatürk and London Gatwick were the only top-ranked airports to see a year-on-year decline in departing seats but these were marginal in both cases. In total, 1,184 airports in the EMEA region will see scheduled services during the week commencing 31 July, with 16 of these welcoming just one weekly flight. One of these is St. Helena, which only welcomed its first commercial flight in 2017. The Atlantic island airport will host one weekly service from South African Airways’ Airlink subsidiary, connecting it with Johannesburg.

The top airlines for departing seats in the EMEA region are Ryanair and easyJet. These European low-cost grandees account for more than five million weekly seats between them, which is equivalent to 13% of the region’s total. Ten of the top 12 airlines are based in Europe (highlighted in blue) with the other two based in the Middle East (highlighted in green). The highest ranking non-European carrier is Emirates. The highest placed Africa operator is Ethiopian Airlines in 26th position. The Ethiopian flag carrier will offer 343,000 weekly departing seats from EMEA airports this summer. Seven of the top 12 carriers are full-service operators while the other five are LCCs or ULCCs. The highest placed full-service operator is Turkish Airlines, but other large European legacy brands including Lufthansa, British Airways and Air France also make the top 12. The UK is the only country with two of its native airlines in the top 12 listing (BA and easyJet). 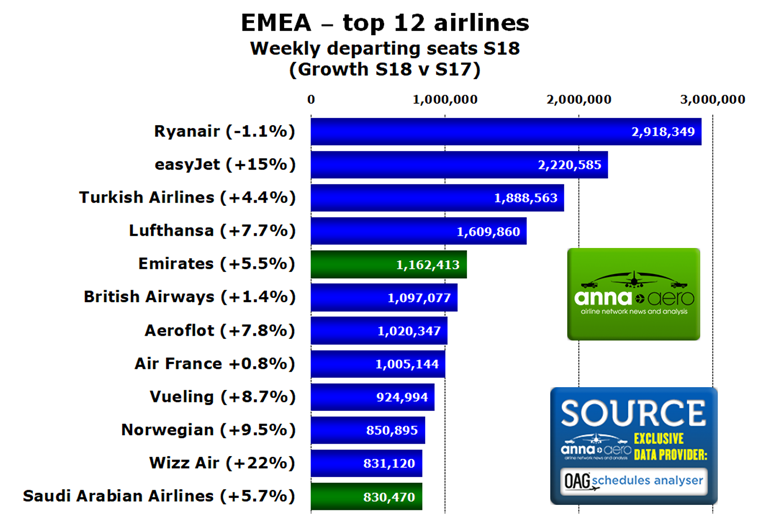 All of the top 12 carriers have experienced an increase in capacity this summer compared to the equivalent peak week in S17, with the exception of Ryanair which has seen a marginal 1.1% reduction. LCCs Wizz Air and easyJet have upped their seat numbers the most, with the two carriers enjoying weekly capacity increases of 22% and 15% respectively. OAG data suggests that 409 airlines will offer at least one scheduled departure from airports in the EMEA region during the week commencing 31 July. The smallest operator is Lydd Air in the UK, which will offer two flights between Lydd on the UK South Coast and Le Touquet in the Pas-de-Calais region of France using a nine-seat twin piston-engine aircraft.

Europe may boast the biggest country markets, airports and airlines in the EMEA region but the three largest routes, based on weekly departing seats in S18, are all domestic links in the Middle East or Africa. In total seven of the top 12 routes are domestic, with three in Turkey, two in South Africa and one each in Saudi Arabia and Germany. The largest international route is Heathrow to New York to JFK, which is in fourth place. This is the only international service among the top-ranked routes that involves a destination outside of the EMEA region. The largest route originating in the EMEA region this summer is the link between Jeddah and Riyadh. Nearly 77,000 weekly one-way seats will be available on this internal Saudi Arabian airport pair in S18, with six operators offering a combined 367 departures. The number of daily flights on this sector varies across the week from 50 to as many as 55. 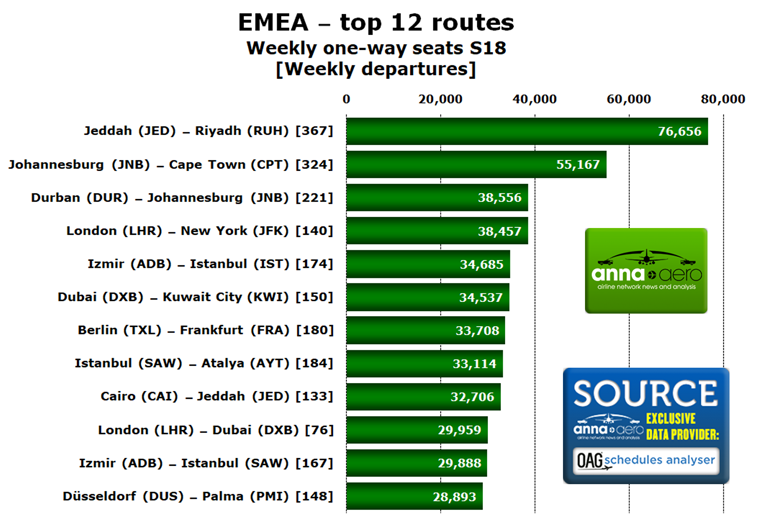 Jeddah, Johannesburg, Heathrow, Izmir and Istanbul Sabiha Gökçen appear the most in the top 12, with each airport featuring as the origin or destination in two of the top-ranked routes. Seven of the top 12 have experienced an increase in weekly capacity this summer, with the strongest percentage growth coming on the Berlin Tegel – Frankfurt (59%) and Sabiha Gökçen – Antalya (40%) sectors. Five of the routes have witnessed a decline in seat numbers, with the biggest cuts coming on the Heathrow – Dubai airport pair, where there has been a 19% reduction in one-way seats. The smallest scheduled service in the region is a link between Angelholm in Sweden and Copenhagen Roskilde in Denmark. The route will be served once during the week commencing 31 July, by FlexFlight using a four-seat Cessna.

This analysis used a number of assumptions. The EMEA region includes all countries grouped into the following global groups by OAG: Africa, Central/Western; Africa, Eastern; Africa, North; Africa, Southern; Europe, Eastern/Central; Europe, Western; and Middle East. Typical peak S18 capacity and frequencies are taken from OAG schedule data for the week commencing 31 July. Where comparisons are made with last summer, the data refers to the week commencing 1 August 2017. The capacity included in the analysis accounts for any flights departing from airports in the EMEA region. This includes all domestic and intra- and extra-regional international flights. On domestic and intra-regional international links capacity is counted in both directions on an airport pair. For extra-regional international services, seat numbers are only counted in the outbound direction. It should be noted that OAG classifies part of Russia in Eastern Europe and part in Asia. Only the capacity relating to the Russian airports in the European segment is included in this analysis. 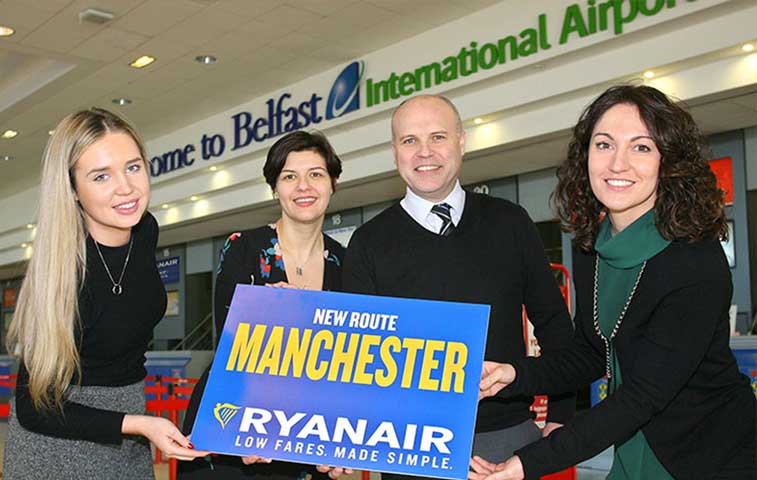 Ryanair is the biggest operator in the EMEA region based on available capacity in S18, while the UK is the biggest country market for departing seats.. The Irish ULCC will offer 2.9 million departing seats during the week commencing 31 July. On 25 March, it commenced a new daily service in the UK between Manchester and Belfast International. Ryanair’s Eimear Ryan (left) and Chiara Ravara (right) along with Belfast International Airport’s Deborah Harris (second left) and Barry Jackson (second right) marked the first 295-kilometre sector.