European airports have seven of 2018 Arch of Triumph top 10

This week’s Arch of Triumph sees the competition finish just one FTWA away from the 300-water-arch mark. Of those numerous finely crafted water sculptures, the majority of baptisms have been rained down upon narrow-body aircraft (typically 737s or A320s), with 171 (or 57%) received so far this year. As this category is unlikely to be overtaken, the focus on this metric is for second position, with wide-bodies (56, 19%) just ahead of regional jets (48, 16%). In last position of the four designated aircraft segments are the props, with just 24 (8%) provided in the 2018 competition, including two this week. Keep Monitoring!! 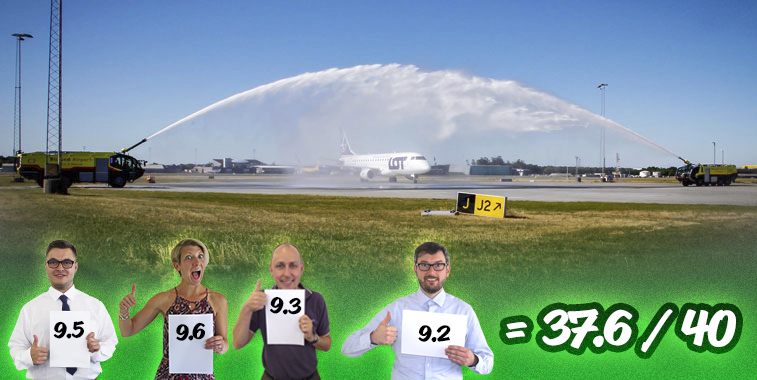 Judges’ comments: Thanks to a duo of water arches this week, Denmark has provided four different FTWA airports in 2018, with Billund and Bornholm joining Aarhus and Copenhagen. Fellow Danish airport Aalborg last sent us an FTWA in 2015, so we are keen for the gateway to take our Danish tally this year up to five sometime soon. That said, Billund is the only Danish airport to have scooped a weekly win… 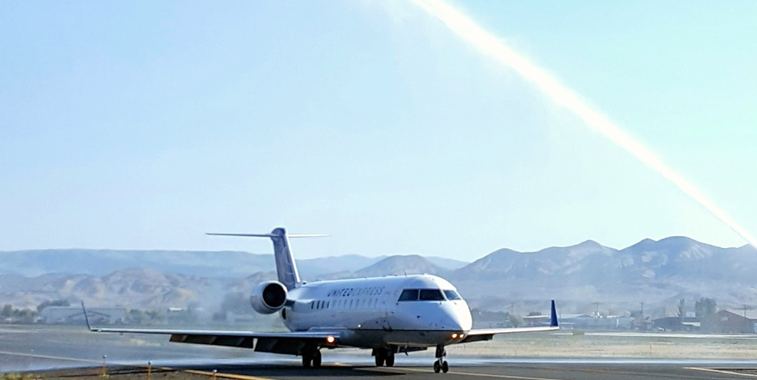 Is there any water in this so-called water arch?

Judges’ comments: As the 2018 tally of water arches creeps close to 300, it is interesting to note the share that regional jets have. With 48 regional jet entries received so far this year, the aircraft type now commands 16% of all FTWAs. That makes it the third-most popular of the four categories which our data elves use…or to look at it another way, the second-least popular… 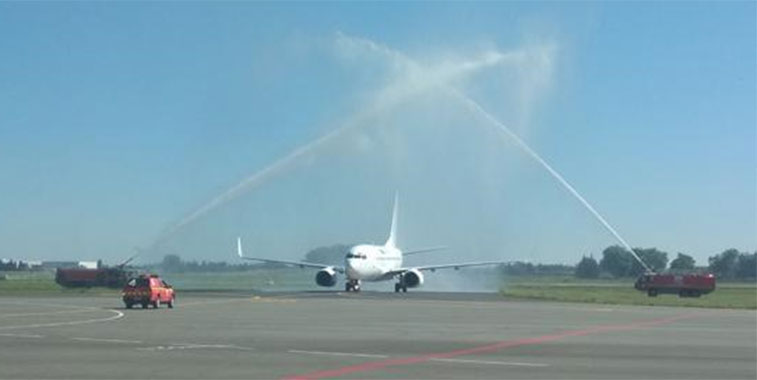 Which vehicle is going to win this game of chicken? Our money is on the plane!

Judges’ comments: With France beating Argentina 4-3 in the Round of 16 at the World Cup earlier this week, you could forgive Montpellier’s fire fighters for having their minds on the game when they performed this FTWA on 27 June…as the big match was three days later on Saturday 30 June. In honour of the fantastic performance by France’s Kylian Mbappe, who completely overshadowed Argentina’s Lionel Messi, this FTWA has been retrospectively named ‘Mbappe’… 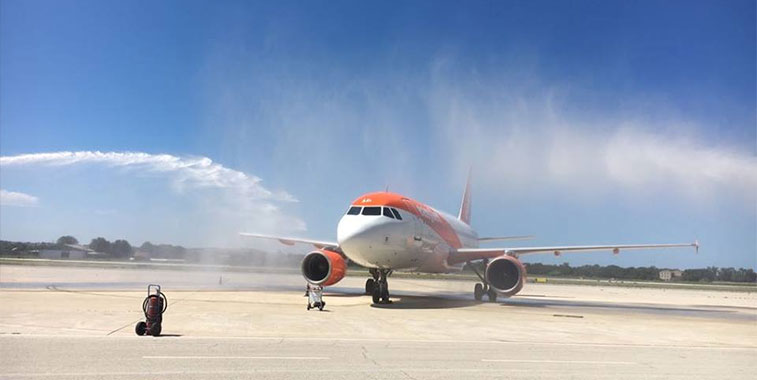 Is that a baggage trolley on the apron?

Judges’ comments: With one half of the arch looking more like some wispy clouds than a water jet…and the other looking like it was aiming for the easyJet aircraft’s engine there is some work needed on this FTWA. Don’t even get us started on the random bits of apron clutter!! 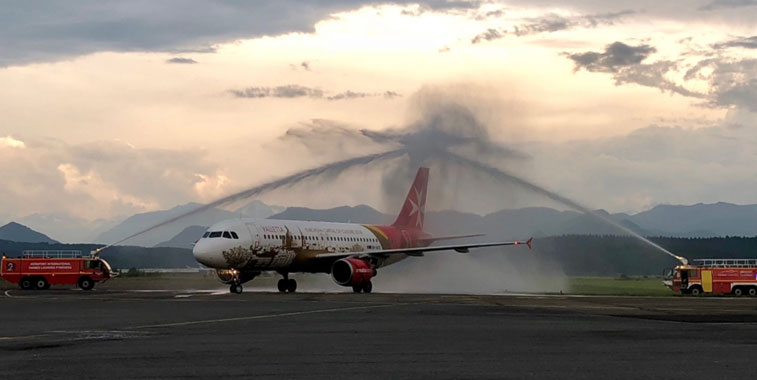 We love a special livery aircraft on an inaugural flight…

Judges’ comments: A common theme the anna.aero judges have observed over the six years of this competition is the regular use of either a larger or newer aircraft (better on board product for VIPs) for the inaugural flight, or as has happened with the Tarbes Lourdes route launch by Air Malta above, the use of a special livery aircraft. This A320 (9H-AEO) carries a special Valletta European Capital of Culture colourscheme. 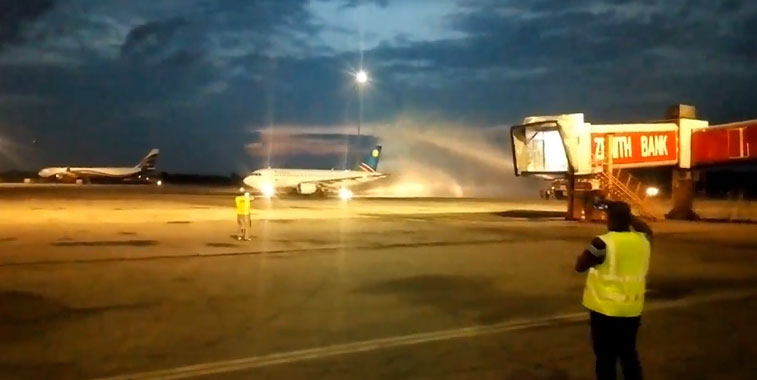 An FTWA brought to you by Zenith Bank…

Judges’ comments: Zenith Bank is a Nigerian multinational financial services provider, and from this angle, it was the right-hand side provider of this FTWA that greeted the arrival of Air Namibia’s first flight from Windhoek. Hopefully Lagos has not overdrawn from its water salute account, as it will need to provide a more valuable FTWA than this one if it wants to contend for the Arch of Triumph title… 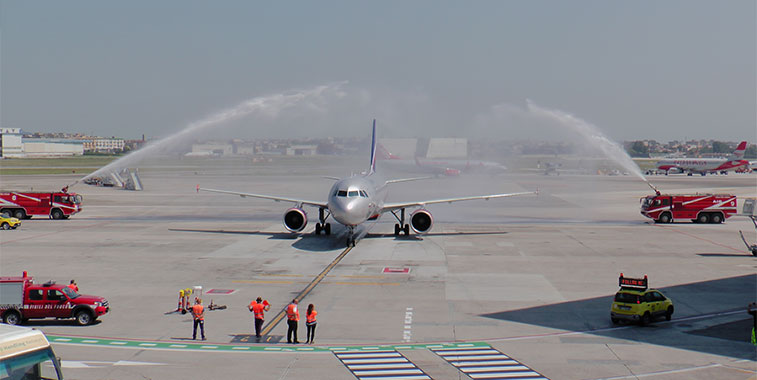 Just how much apron clutter do we need?

Judges’ comments: Four people (What are they all doing at the head of stand? Only one appears to be doing any work!) and at least six vehicles are in this FTWA image. The anna.aero judges are sticklers for the clean lines of a good water arch…which should feature just the fire tenders which are undertaking the FTWA…not follow-mes or the fire chief’s jeep…just the trucks… 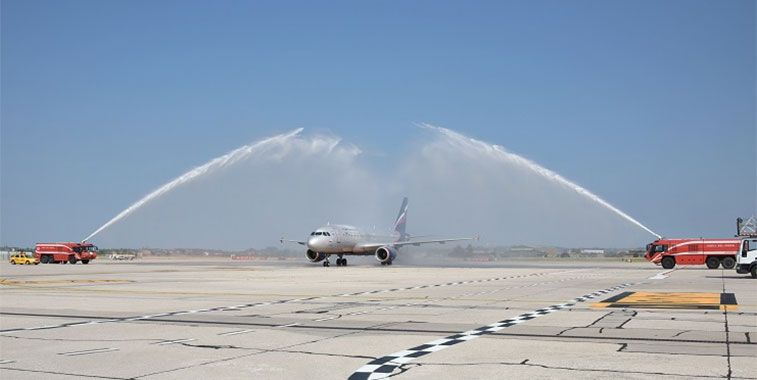 The battle of the Italian airports welcoming Aeroflot services this week…but who won?

Judges’ comments: Aeroflot launched two new Italian routes on the same day this week, giving Naples and Verona airports the opportunity to slug it out for the honour of providing the best FTWA for the Russian carrier. Although both efforts have significant gaps in the water arches, the entry from Verona – the city of love – has caught the collective eyes of the anna.aero judges… 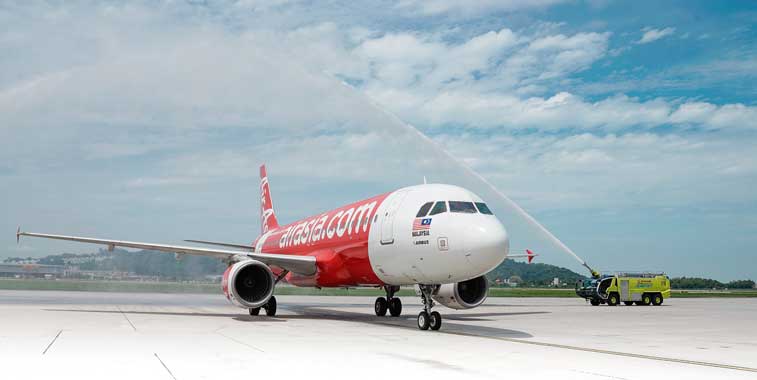 Our second FTWA of 2018 from the Malaysia airport…

Judges’ comments: This is the second FTWA which we have received from Penang this year. The first was in February when the Malaysian airport welcomed the arrival of Qatar Airways’ service from Doha. That water arch notched up a score of 29.2…so this time out…with a tally of 28.6…the airport’s performance has slipped back somewhat… 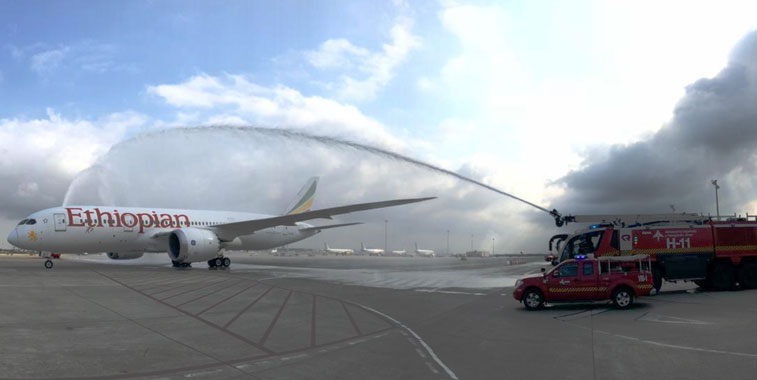 So close to winning this week…apart from those two FTWA which were better!!

Judges’ comments: Nobody remembers who came second or third in a competition apparently…and we are no different…in fact we have already forgotten which Spanish airport sent in this FTWA – just kidding!! On a normal week this effort from Barcelona may well have been the victor…but instead it was given a Danish pasting by Billund… 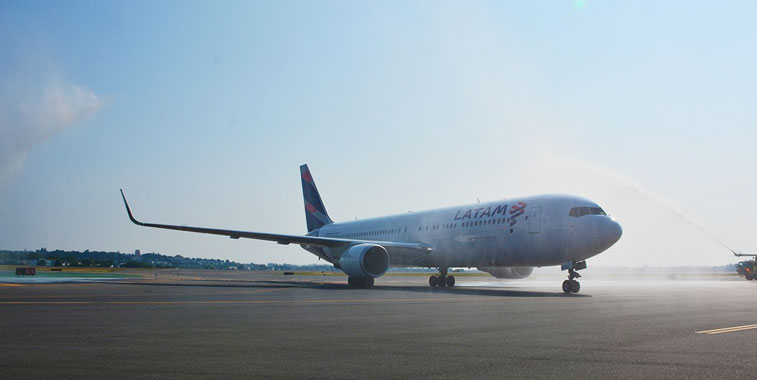 Judges’ comments: When people travel to Boston, one of the must-see places is Cheers, best remembered internationally as the exterior of the bar seen in the hit NBC sitcom of the same name. Even one of anna.aero’s data elves has been to the bar, and he can confirm that he got a much better welcome there then LATAM Airlines did from Boston’s firefighters at Logan International on first flight inauguration day… 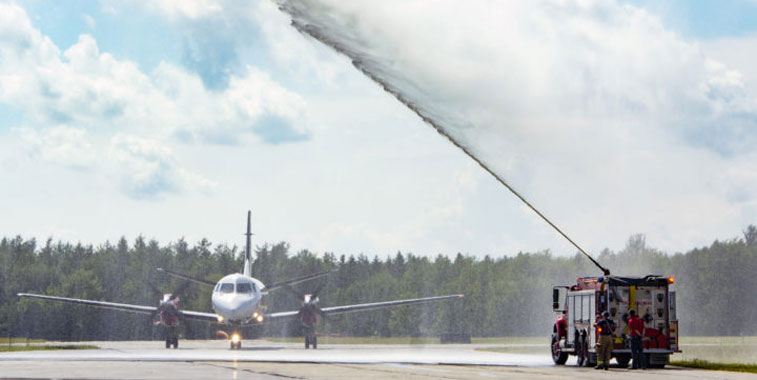 Will the pilot be able to see us if we hide behind the fire truck??

Judges’ comments: As we always say when we are presented with a FTWA like the one above, the maximum we can score half a water arch is half of the potential tally, which is 5.0. If the other half of this FTWA was a mirror image of the one we can see, then Bar Harbor would have scored a far more respectable 29.6 this week…rather than just 14.8… 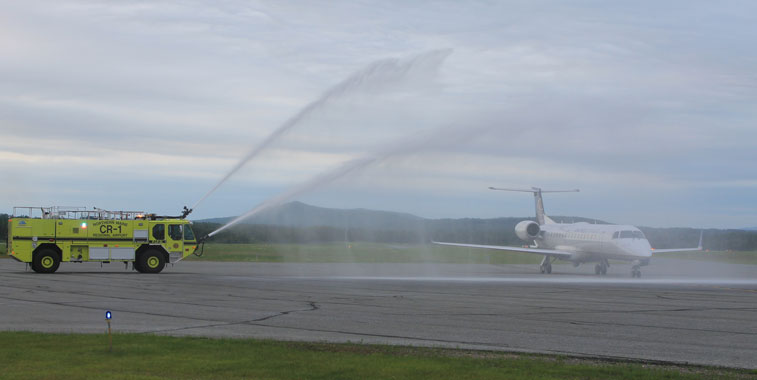 Judges’ comments: We have to give kudos to the firefighters of Presque Isle in Maine. While the lack of a right-hand tender means our judges can only give a maximum score of 5.0, at least they have tried to counteract the loss by using two jets to greet United Airlines’ new service from the Big Apple. 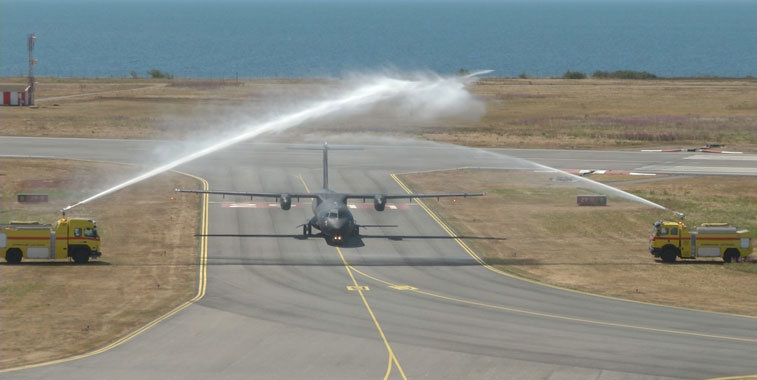 Is that a military aircraft or a commercial one?

Judges’ comments: Bornholm is a Danish island and given its diminutive size, it very rarely gets any new route action, especially as presently the airport only has domestic connections to Copenhagen, Billund, Aalborg and now Sonderborg. Unsurprinsgly then, this is the first time we have received an FTWA from the airport and its not a bad first-time effort. 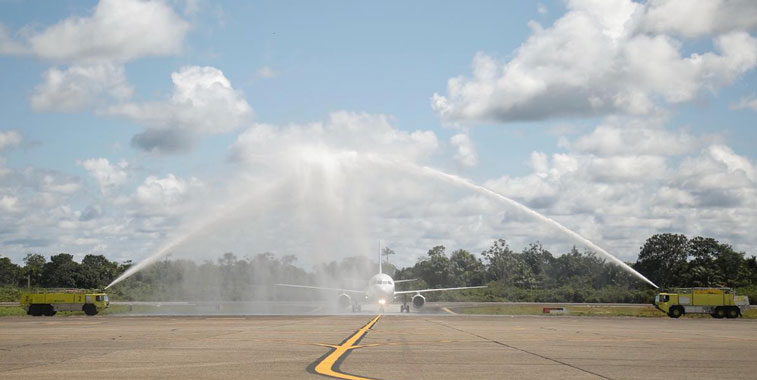 An FTWA as symmetrical as its background…

Judges’ comments: We’re quite impressed with the water salute produced here in Iquitos. The trucks are an equal distance apart, the clouds, trees and apron marking distribution is balanced on either side of the image. The only thing stopping this arch from scoring better is that only the left-hand side of this FTWA has a water curtain. It’s close…second place in fact…but no cigar this week…