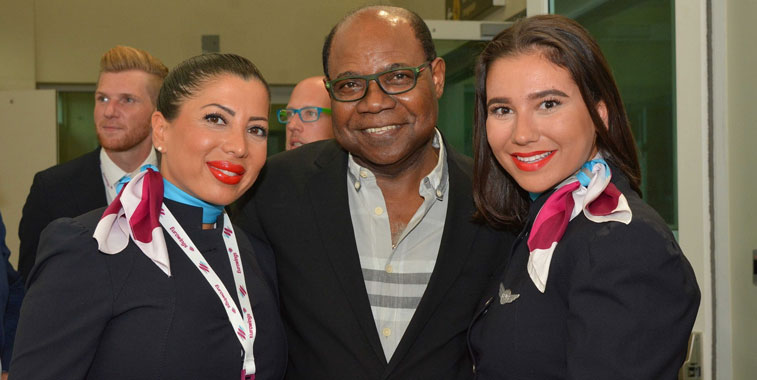 Back in March 2017 at ITB Berlin, Edmund Bartlett, Minster of Tourism for Jamaica, celebrated with Eurowings crew the announcement that the carrier would begin later that year a twice-weekly service from Cologne Bonn. While this route is due to switch to Düsseldorf for the start of W18/19, the carrier will advance capacity from Montego Bay this year by also adding flights from Munich. The result means the carrier will increase its seat capacity between German and Montego Bay by 199% in 2018, although it should be noted it only operated from the airport for six months in 2017.

Montego Bay lies on the northern side of Jamaica, and is the second-largest Anglophone city in the Caribbean, home to over 110,000 inhabitants. Known for its crystal white beaches, gleaming diamond blue waters and grand resorts, it is no surprise that many head to the Caribbean hot-spot for a bit of sun. While many people go to Jamaica for a vacation, statistics from the Jamaica Tourism Board reveals that 76% (1.54 million) of stopovers by foreign nationals in 2017 were for holidays, with 15% of visits being for VFR travel, while the third biggest sector was business and conventions which occupied a 4.8% market share. However, the most important trend for Montego Bay Airport is that its growth seems to be accelerating. 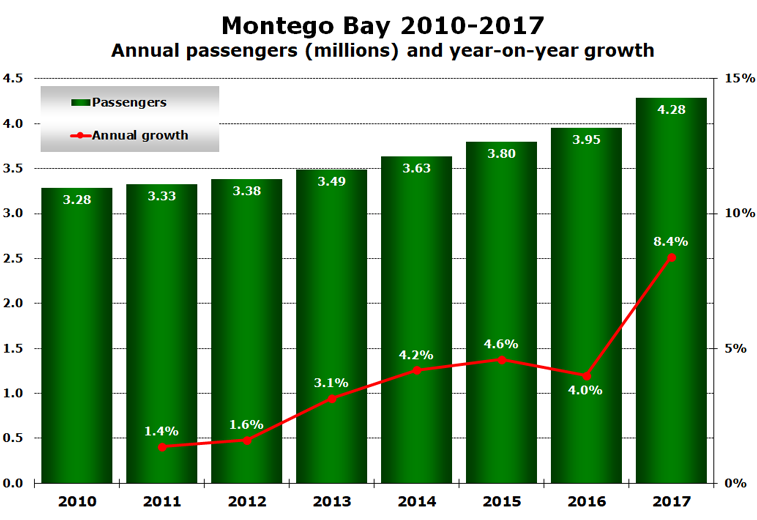 For the first five months of 2018, Montego Bay has handled 1.96 million people, up 6.5% versus the 1.84 million that it handled during the same period of 2017. The best recorded month for passenger growth was May, with numbers increasing by 9.2%, while the smallest increase was posted in February and April, where 3.8% growth was achieved in each month. If an average rate of 6.5% was maintained for the remainder of 2018, then Montego Bay can expect to process 4.56 million passengers this year.

When using anna.aero’s Seasonal Variation In Demand (SVID) calculator, Montego Bay delivers a score of 2.50 for its 2017 monthly passenger numbers, which means it gains a “Good” rating. While passenger numbers progressed nicely last year versus 2016, the traffic rise has actually helped the airport’s seasonality profile become flatter, a trend that usually goes the opposite way when growth occurs at an airport of Montego Bay’s ilk – a tourism destination. The airport’s score dropped from a rating of 2.94 in 2016, a result which still carries a “Good” rating by anna.aero.

Witnessing its one-way seat capacity to Montego Bay rise by over 26% this year, Southwest Airlines will grow to become the Jamaican airport’s second largest carrier after American Airlines in 2018, as it overtakes Delta Air Lines. The reason for the LCC’s strong rise is due to it adding frequencies on its routes from Baltimore/Washington and Houston Hobby, while 2018 marks the first full-year of the carrier’s service from Fort Lauderdale which began on 4 June 2017. Along with Southwest, a further two airlines (highlighted in light green), namely Air Canada (15% rise in one-way seats), including Rouge services, and Spirit Airlines (+46%), have also reported a double-digit rise in seat capacity to Montego Bay in 2018 based on current schedules. One factor which has helped the latter carrier to grow by almost half from Montego Bay in 2018 is due to it adding a daily service from Baltimore/Washington on 22 March. 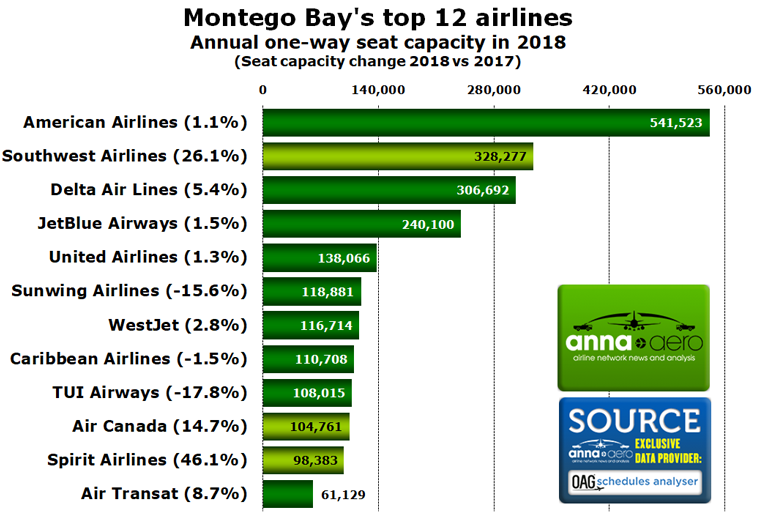 Of Montego Bay’s top 12 airlines, three have reported a drop in capacity for 2018, namely Sunwing Airlines, Caribbean Airlines and TUI Airways. When referencing OAG schedules, the reason for the Canadian leisure airline’s drop in seats is due to it only offering a twice-weekly service from Toronto Pearson this summer compared to a three times weekly operation in S17. Outside of the top 12, sound growth was recorded by Condor (14th largest airline; 3.1% growth in seat capacity); Eurowings (15th; +199%), Copa Airlines (16th; +23%), Neos Air (18th; +4.3%), Sun Country Airlines (19th; +15%) and Thomas Cook Airlines Scandinavia (22nd; +40%).

The leading destination from Montego Bay is Pearson, with the Canadian airport maintaining its lead at the top thanks to a mere 1.1% increase in capacity this year. However, its prominence at the top has been cut due to the strong rise in demand for services from Fort Lauderdale, with one-way seat capacity to the Floridian city growing by nearly 28%. It is interesting to note that just one of the top 12 routes – London Gatwick (highlighted in light green) – is the only long-haul destination in the top 12. 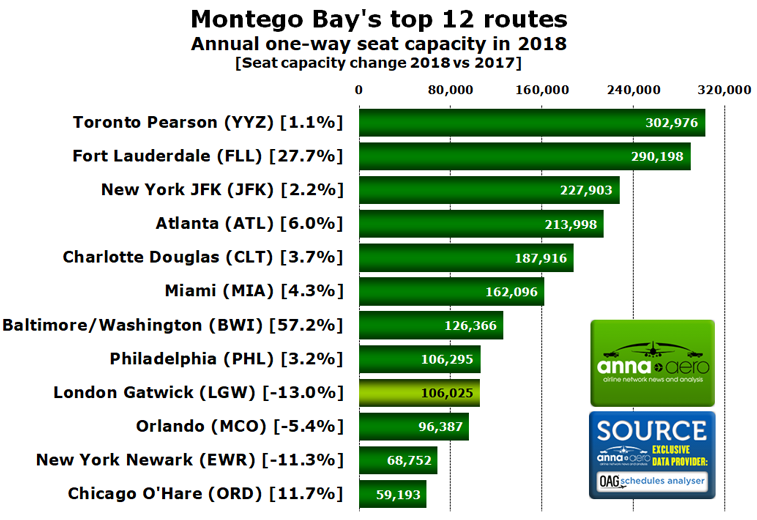 It is no surprise to see so many US airports in the top 12, as data from the Jamaica Tourism Board reveals that just over 64% (1.51 million) of tourists to Jamaica last year originated from the country. Last year’s result was a 7.4% increase in US visitors when compared to 2016. Canada is the second largest inbound tourism market, with it occupying a 17% share of tourist arrivals in Jamaica last year, while the UK was third with 9.3%.

Looking ahead for the rest of this year, some routes to look out for include the opening of flights to Düsseldorf and Munich with Eurowings, although the carrier is ending Cologne Bonn flights to allow for the opening of Düsseldorf services. Along with this, Montego Bay will welcome a new long-haul carrier in 2019, with Thomas Cook Airlines planning flights from Manchester on 6 May next year. 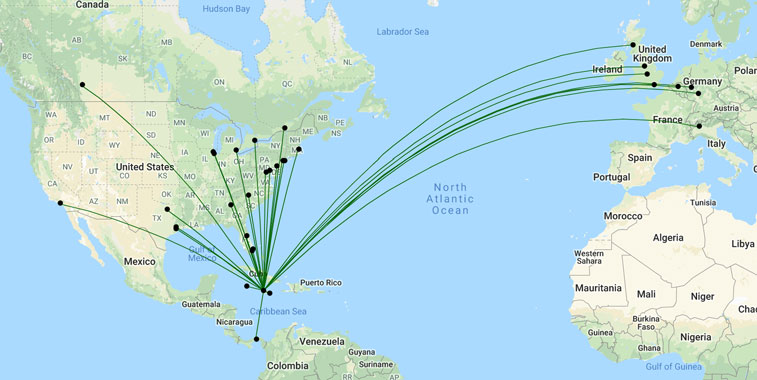 Given that Jamaica’s leading tourism destinations are the US (64% of tourist arrivals in 2017), Canada (17%) and the UK (9.3%), it is no surprise to see that Montego Bay Airport’s destination map consists of routes to these regions. Two new destinations that will join the network later this year include Munich and Düsseldorf courtesy of Eurowings, a carrier which will offer 200% more seats from the airport in 2018. However, it will end Cologne Bonn flights in W18/19, with this closure allowing for the opening of the Düsseldorf service.