Singapore-Vancouver is “Skyscanner Unserved Route of the Week” with 130,000 searches; Singapore Airlines’ only Canadian connection?? 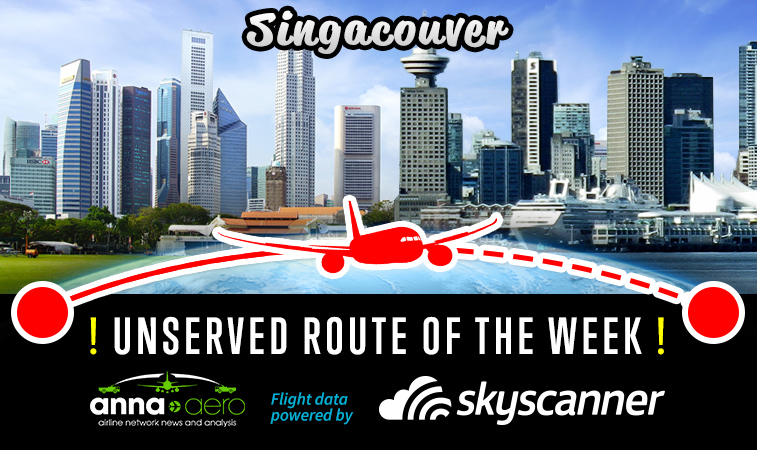 “Vancouver is one of our top new link targets, given the strong O&D demand on the city pair, numbering in excess of 30,000 per annum,” says Lim Ching Kiat, Changi Airport Group’s MD for Air Hub Development. Apart from all the high rises in ‘Singacouver’, and both considering themselves to be multi-culturally Asian, these two great cities are in fact very contrasting.

With over 130,000 searches in the last 12 months, a potential city pair from Singapore to Vancouver has been identified as this week’s “Skyscanner-anna.aero Unserved Route of the Week” – a powerful analysis based on aspirational data captured from the Skyscanner.net flight comparison site used by +70 million unique visitors per month. “Vancouver is one of our top new link targets, given the strong O&D demand on the city pair, numbering in excess of 30,000 per annum,” explains Lim Ching Kiat, Changi Airport Group’s MD for Air Hub Development. 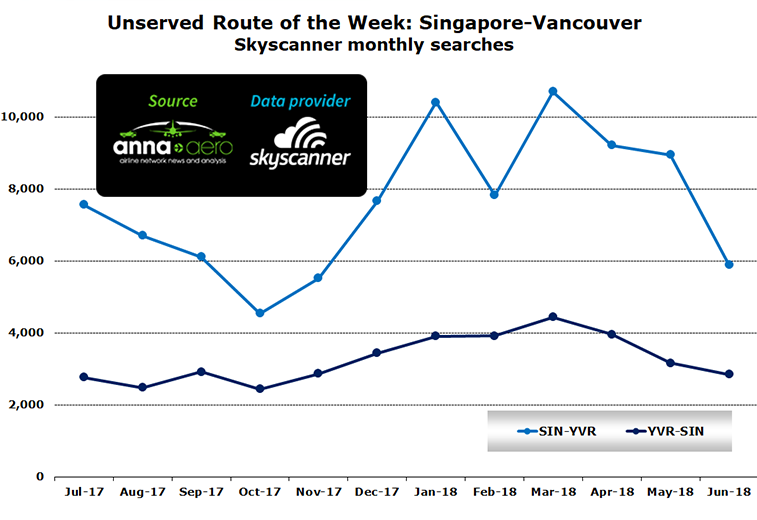 Skyscanner demand on this week’s unserved route shows a preference towards the Asian end of the city pair, with a 70/30 split, so on this basis we looked at potential carriers at the Singapore origin first. According to OAG schedules for the week commencing 3 July, the largest carrier at Singapore is Singapore Airlines (29% share of weekly seats). The Star Alliance carrier’s route network from the airport presently consists of 62 destinations, of which four are in North America. These are a twice-daily service to both Los Angeles and San Francisco, as well as a daily operation to New York JFK and a five times weekly route to Houston, but none to Canada. The majority of these services are flown via intermediate points in Asia (Hong Kong, Tokyo Narita, Seoul Incheon) and Europe (Manchester and Frankfurt). Therefore, sector length is clearly an issue for some of its North American services, but as the airline is planning to start a direct three times weekly A350-900-operated link to New York Newark in October, at a distance of around 15,300 kilometres, the 12,800-kilometre Singapore-Vancouver sector should pose no operational problems with the right aircraft type. On this basis, and with this compelling Skyscanner data now in evidence, there appears to be no barriers in the way to obstruct Singapore Airlines from starting to seriously consider its first Canadian route.

Scoot is the second-largest carrier (13% share of weekly seats) at the Singaporean gateway, presently offering 60 non-stop destinations. 54 of these are found within Asia, with the remaining six routes being to the Southwest Pacific region – the four destinations its serves in Australia (Melbourne, Gold Coast, Perth and Sydney –  and to Europe (Berlin Tegel and Athens). The long-haul European sectors have both been started in the last 12 months by the LCLH operator, with the German capital city being added just last month. So clearly expanding Scoot’s reach in terms of its network is firmly on the agenda, its just down to the airline bosses to determine which of the Singapore Airlines family is best suited to pick up the Vancouver sector. With seven 787-9s in its fleet, the challenging sector length should also not be an issue for the LCLH carrier.

Contemplating the Canadian end of the route, Vancouver’s leading capacity provider of its current 40 serving airlines is unsurprisingly Air Canada, which offers 46% of the airport’s weekly seats. While the carrier already heavily serves Asia, presently offering flights to Incheon, Shanghai Pudong, Taipei Taoyuan, Narita, Beijing, Hong Kong (all daily), Osaka Kansai (six times weekly), Delhi (four) and Nagoya (three), it does not serve any points in Southeast Asia yet. Again, there could be underlying operation considerations stopping this route from happening. However as the Star Alliance member already flies a direct route from Vancouver to Melbourne, a 13,200-kilometre sector operated by its 787-9 fleet, the operational capability to fly direct to Singapore is clearly there.

When looking at the previous year of search data (graph above), the busiest month (from Singapore) is March 2018, with nearly 11,000 searches. “Currently more than one in five passengers travelling between Singapore and Vancouver or Canada are premium economy, business or first class passengers. With strong trade between Canadian and Asian businesses, as well as the recent set up of trade offices in Singapore by the Province of British Columbia, this potential city pair will further drive trade, business and people flows,” confirms Lim. On this basis the anticipated booking profile of the route has been allocated as long-haul business, resulting in around 53% of travellers on this potential sector wanting to book between six to three months before departure. This would seem to indicate that the busiest months for traffic will be between June and September. Using the same methodology for the Vancouver end of the sector, the peak months for traffic will also be between June and September.

According to OAG Traffic Analyser, because there is no direct service, the top two connecting options chosen by those passengers who did book travel between Singapore and Vancouver in the last 12 months (year ending April 2018) indicates that the majority of connecting travellers used Hong Kong (27%), Taoyuan (24%) and San Francisco (9%). Looking at the traffic flows in the opposite direction, the top two connecting airports remain the same (Hong Kong, 31%; Taoyuan, 25%), however the US airport has been pushed into fourth spot by Narita (8%). With the main airline options both being Star Alliance members and operating a hub at each end of this route, there will also be significant potential transfer traffic to add to the equation too. “If we include the potential catchment traffic to/from the rest of Canada and parts of the Pacific Northwest and US West Coast, the O&D demand will grow to an excess of 100,000 per annum,” adds Lim. 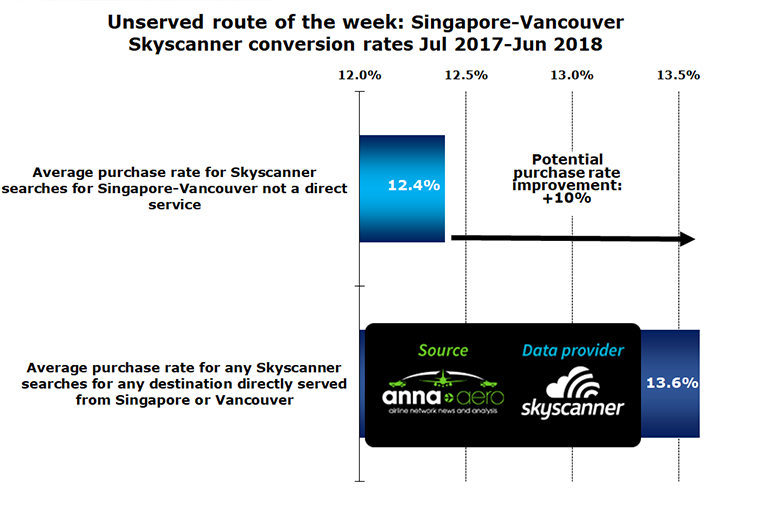 Indeed, an O&D market that is not served by a non-stop flight will typically display a low purchase rate and low traffic. In this instance Skyscanner’s Travel Insight indicates a monthly average purchase rate of 12.4% for the Singapore to Vancouver route (see graph above). Therefore, if there was a Singapore to Vancouver route, and if bookings performed in line with the “Skyscanner market average” for direct services at both airports (13.6%), the airline operating this route could immediately expect an improved purchase rate of nearly 10%, without any increased marketing spend. However, with over 130,000 annual searches in the last year, and with the sector being operated by an appropriately-sized aircraft for the type of route, a three times weekly service should be immediately viable for the airline choosing to start this potential city pair. “Non-stop flights from Singapore to Vancouver are now a possibility and can be reached with the latest aircraft technology like the 787s and A350s,” concludes Lim.