Zurich’s charming Chengdu Cake of the Week creation is celebrated 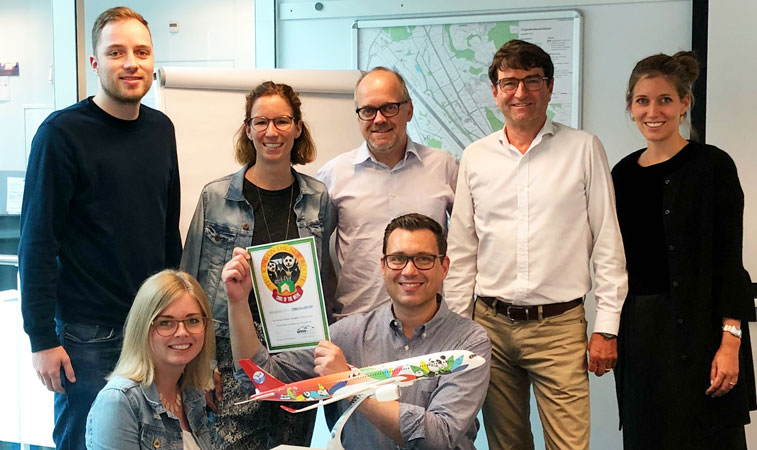 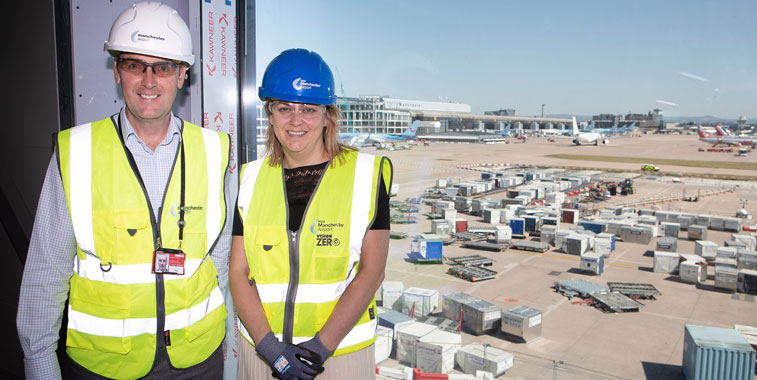 Manchester Airport CEO Andrew Cowan greeted UK Aviation Minister Baroness Sugg at the airport last week, with Sugg being given an overview of the airport’s £1 billion transformation scheme as well as a tour of the construction site. The visit nicely topped off a week during which the airport also celebrated its 80th birthday (also see below). “Manchester Airport is an international success story and it is fantastic to play a part in its 80th birthday celebrations,” commented Sugg. “This Government is committed to ensuring that the North gets the connectivity it needs and that airports like Manchester play an important role in boosting the economy through jobs and businesses opportunities.” 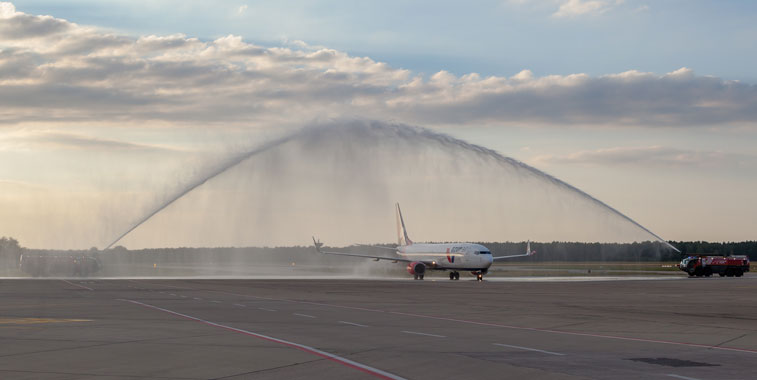 Routes Europe 2019 hosts welcomed the start of Azur Air’s new twice-weekly charter service from Antalya on 29 June, with the German airport greeting the arrival of the first flight with a water arch salute. “We are pleased to further expand our already wide-ranging airline portfolio,” said Dr. Raoul Hille, MD of Hannover Airport. 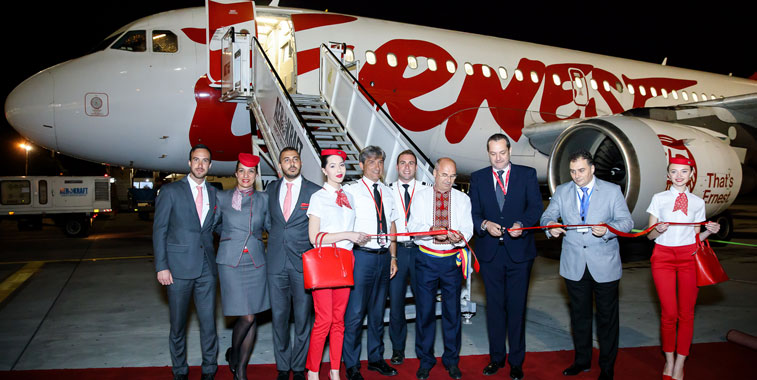 Ernest Airlines launched flights from Cuneo (twice-weekly) and Verona (three times weekly) in Italy to Iasi in Romania between 21 and 23 June, with a ribbon cutting ceremony being held at the Romanian airport to mark the opening of flights. Taking part in the ribbon cutting along with the Ernest crew are: Maricel Popa, President of Iasi County Council; Davide Strinna, Country Manager Ukraine & Romania, Ernest; and Catalin Bulgariu, GM of Iasi Airport. 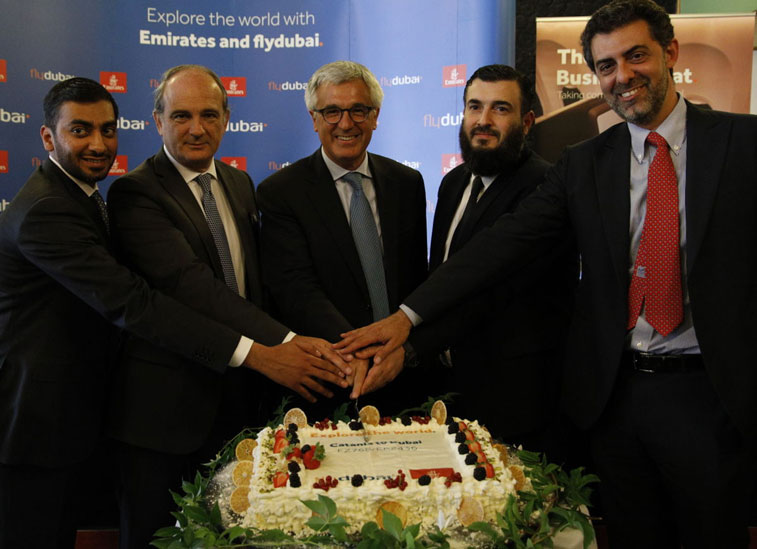 flydubai launched daily flights from its home base of Dubai to Catania in Sicily on 13 June, with the airport and airline celebrating the service last week. To mark the new service, a celebratory cake was made, with the prestigious cutting ceremony being carried out by: Muhannad Alnaqbi, Deputy Head of the UAE Mission to Italy; Thierry Aucoc, SVP, Commercial Operations Europe & Russian Federation, Emirates; Liborio Stellino, the Ambassador of Italy in the UAE; Jeyhun Efendi, SVP Commercial Operations & E-Commerce, flydubai; and Nico Torrisi, President and CEO of SAC (Società Aeroporto Catania). The airline will serve the route using its 737 MAX 8s and faces no direct competition. FlyEgypt commenced charter operations between Hurghada and Memmingen on 2 July, with the carrier planning to operate a weekly (Mondays) service on the route until 22 October. To mark the opening of the sector, the German airport greeted the first flight with a water arch salute. Posing with route-branded t-shirts and the now famous Memmingen heart-shaped Bavarian cookie are the airport’s Marcel Schütz, Head of Aviation and Julia Baumann, Aviation Marketing & Sales Manager. Flights are operated on behalf of Germany’s fourth largest tour operator FTI. 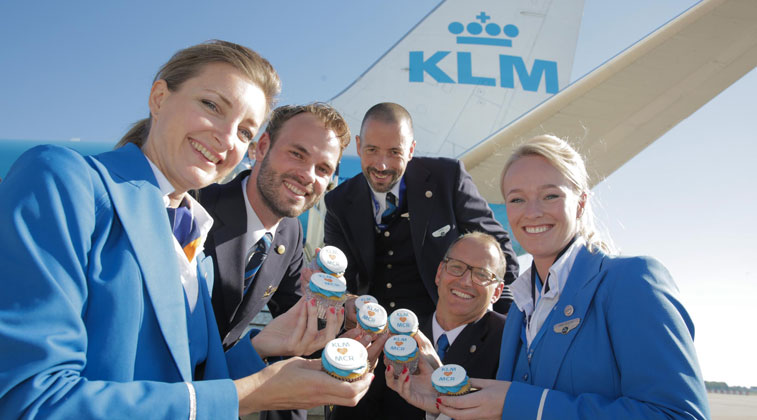 Coinciding with Manchester Airport’s 80th birthday, KLM last week celebrated its 80-year anniversary of serving the UK airport from Amsterdam. The airline started serving the airport on 27 June 1938, two days after the facility officially opened. “Having been the first International carrier to operate from Manchester Airport, we are delighted to be celebrating 80 years of linking Manchester to the world. Demand for efficient, seamless travel has grown rapidly throughout the years and KLM now operates six daily flights between Manchester and Amsterdam,” commented Bénédicte Duval, GM UK & Ireland, Air France-KLM. The airline presently serves Manchester using its mixed fleet of Embraers and 737s. 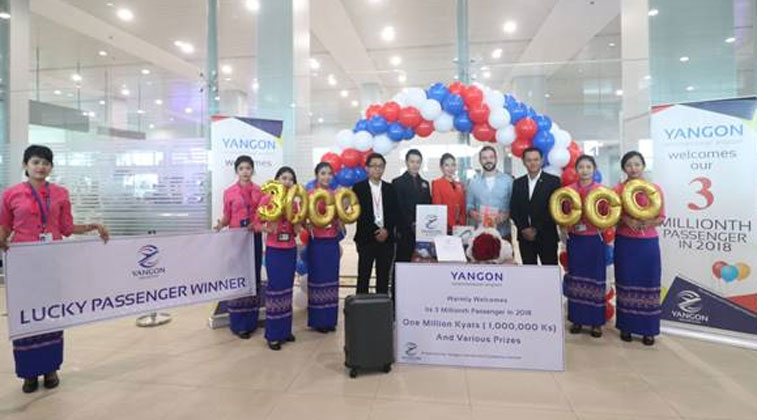 Yangon Airport in Myanmar greeted its three millionth passenger of the year on 29 June, with the airport capable of handling up to 20 million passengers per year. To celebrate the milestone, the lucky three millionth passenger, Jefferson Olivieri Costa (blue shirt), was treated to a one million MMK cash prize (€610) as well as other gifts valued at over one million MMK. These include a two-night stay in Horizon Lakeview Hotel and Resort in Nay Pyi Taw, some Samsonite travel luggage, an Artisan made-in-Myanmar bag, a Samsonite passport holder, JBL wireless headphones, as well as other travel accessories.