Wizz Air announces second based A320 for Chisinau and five new routes; Air Moldova’s operation to remain over twice as big 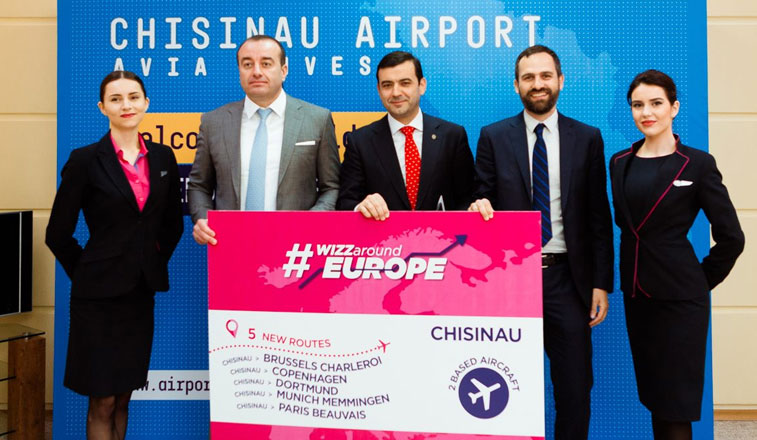 Wizz Air announced on 5 July that from December it will station a second A320 in Chisinau, allowing it to open routes to Brussels Charleroi, Copenhagen, Dortmund, Memmingen and Paris Beauvais. Seen promoting the carrier’s expansion plans from the Moldovan capital are: Petru Jardan, GM Avia Invest, the concessionaire of Chisinau Airport; Chiril Gaburici, Moldovan Minister of Economy and Infrastructure; and George Michalopoulos, CCO, Wizz Air.

Wizz Air has confirmed that it will ramp-up its operation from Chisinau as of December, with the carrier planning to base a second A320 in the Moldovan capital, allowing it to open five new routes to Brussels Charleroi, Copenhagen, Dortmund, Memmingen and Paris Beauvais. The airport first became a base for the airline on 26 March last year, with Wizz Air’s initial services to Chisinau taking place on 8 October 2013, the day it launched twice-weekly flights from Rome Ciampino and Venice Treviso.

Along with the new route additions that were announced alongside the news of a second aircraft, the ULCC will also increase the frequency of its existing routes to Berlin Schönefeld (increasing from twice to three times weekly), London Luton (from daily to nine weekly), Milan Bergamo (three to five weekly), Rome Ciampino (twice to three weekly) and Venice Treviso (four to five weekly). The result of this expansion by Wizz Air equals 17 more weekly departures from Chisinau commencing 14 December. A breakdown of the new services is summarised below, including competition at the time of launch.

The heaviest route for competition will be Paris Beauvais, with Air Moldova already offering four weekly flights using its mixed fleet of A319s and A320s. On the Brussels Charleroi sector it does not face direct competition, but it will indirectlly go head-to-head with the Moldovan flag carrier again, which operates a twice-weekly service into the Belgian capital’s main airport. With flights to Copenhagen, it opens up a new country pairing in Europe, with no flights currently existing between Moldova and Denmark.

The result of Wizz Air’s expansion means that for 2019, if no other capacity announcements are made, the ULCC will offer just over 318,000 additional seats from Chisinau next year (based on frequencies being maintained for S19), a result which will see it grow by 71% according to anna.aero’s calculations. However this could shift either way by a few percent if schedules change for S19. The result means that next year Wizz Air will offer over 700,000 seats from the city. However the ULCC’s presence is still dwarfed by national carrier Air Moldova, with its operations just over twice as big (106% greater) as Wizz Air’s, assuming that the airline chooses to remain constant next year on 1.57 million seats. Given that it has no aircraft orders, or no confirmation of leasing in additional capacity for 2019, this is reasonably likely to happen. 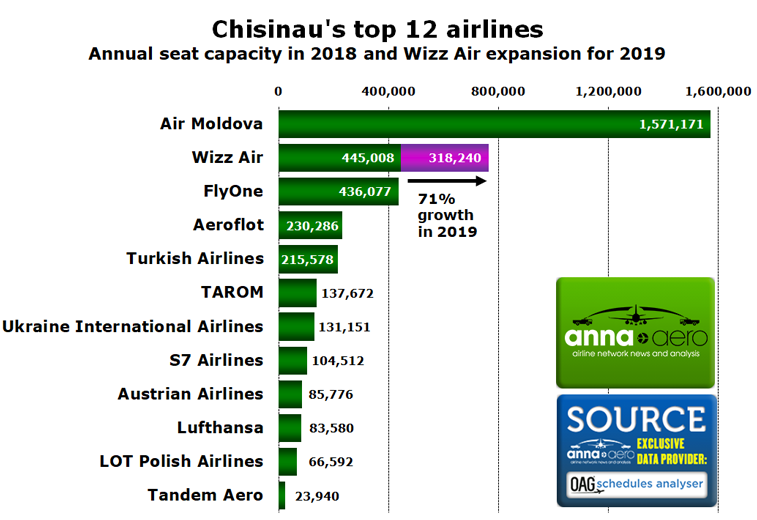 With its expansion, Wizz Air extends its lead over Moldova’s low-cost airline FlyOne, a carrier which presently has two A320s and one A319 according to its website fleet fact sheet (July 2018). Overall Wizz Air will offer 13 routes to eight countries (up from five in S18), resulting in 42 weekly departures (up from 25 in S18). In total Wizz Air will have a 20% market share of seats from Chisinau in 2019, up from 13% this year. Air Moldova however, if it does not expand, will see its share fall from 44% to 41%, while FlyOne’s will drop to 11% from 12% this year.

Between January and May this year, according to Wizz Air’s press release, it has carried just over 158,000 passengers from Chisinau, up 33% when compared to the same period of 2017. With this, anna.aero has forecast that Wizz Air achieved an average theoretical load factor on its Chisinau flights of just under 93% for the first five months of this year. If this is the benchmark set by the airline for its Moldovan base, then with the extra capacity, it will be looking to carry around 706,000 passengers from the capital next year. 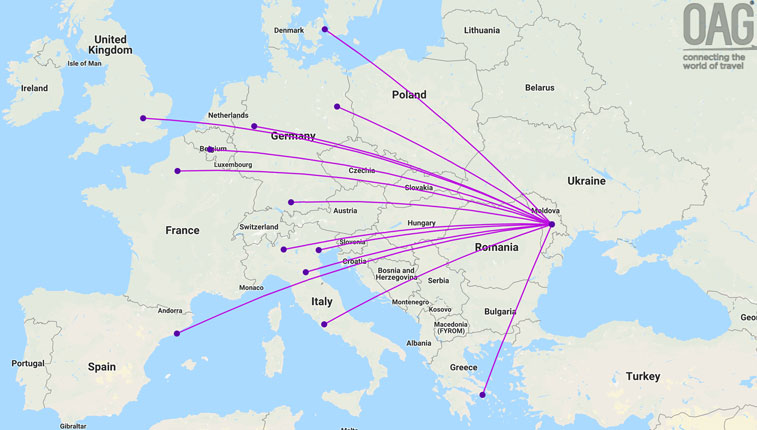 Wizz Air’s route map from Chisinau in 2019 will consist of 13 routes in eight countries, up from eight routes in five countries this summer. With two based A320s at the airport, the carrier will offer 42 weekly departures from Chisinau in 2019, up from 25 in S18. With a forecast capacity growth of 71% predicted by anna.aero for next year, the airline should carry just over 700,000 passengers from Moldova next year, however operations are still half the size of Air Moldova.