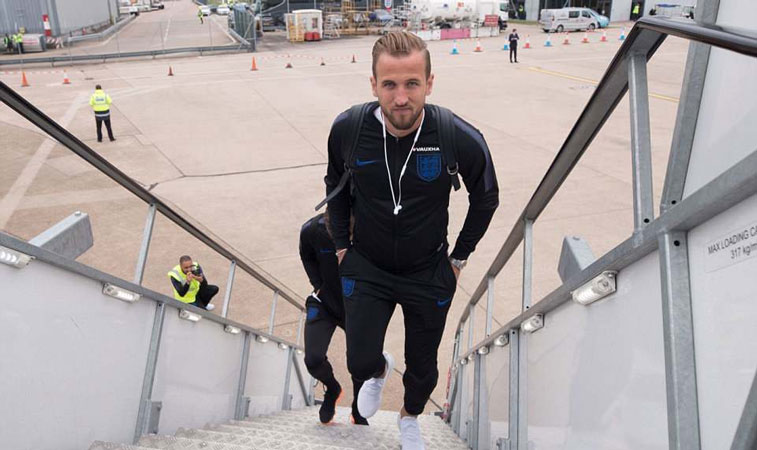 Could Harry Kane be the man to captain England to its second-ever World Cup victory? He looks as cool as a cucumber here boarding the private 757-200 at Birmingham Airport before departing for St. Petersburg on 12 June. After a nervous final 16 game against Columbia on 3 July, England now face Sweden in the quarter finals. England are joint second favourites to win the competition alongside France, however using OAG schedules the team is currently the number one in the world in trms of those nations that are still left in the competition, with it ranking eighth in the world among 220+ countries.

Well after a dramatic few days, at least for anna.aero’s England-supporting data elves, except for one who has Uruguay in the work sweepstake, it’s time to gear-up for the next stage of the competition – the quarter finals! Left in the race for the coveted award (no not Cake of the Week), the prestigious golden FIFA World Cup Trophy, are Belgium, Brazil, Croatia, England, France, Russia, Sweden and Uruguay. With this in mind, anna.aero thought it would have a bit of fun to see which were the biggest teams in terms of market size, country pairings, and which side has the stronger airport players.

The rankings – FIFA’s versus anna.aero’s

With many football pundits and fans around the world determining the winner based on “real” statistics from the competition and overall performances so far, anna.aero has decided to see if aviation could help decide the winner. Below shows the table highlighting the FIFA World Cup Ranking for the countries still left in the competition, and the ranking conducted by anna.aero which relates to country market size, based on 2018 one-way seat capacity.

Half of the teams left in the competition have already won the title. When referencing various betting websites, Brazil is currently the odds-on favourite to win the 2018 FIFA World Cup, with an average odds of 11/4 (based on data from 4 July 2018). The South American nation is also the second highest ranking team in the world at the moment by FIFA, with Germany at number one, albeit with them now out of the competition. However, using anna.aero’s world ranking, it is England which should be the favourite, just beating Brazil, with the former being the world’s eighth largest aviation market, and the South American country being ninth. For those of you wondering, data for England does not include seat capacity from airports in Scotland, Wales, Northern Ireland or the Channel Islands which all come under the United Kingdom in OAG. Presently England are joint-second favourites to win the competition along with France, with odds of 4/1.

With just the English Channel splitting the two, it is the market between England and France which is the largest, when it comes to the aviation world, of the last eight teams that are taking part in quarter finals. With the market seeing close to 13.27 million two-way seats in 2018, it is 3.9 times bigger than the next pairing, with that being Saturday’s (7 July) quarter final play-off between England and Sweden. Along with this market, another (highlighted in red) is also another quarter final pairing, with Russia taking on Croatia on Friday (6 July). Of the other two quarter final’s taking place – France versus Uruguay and Belgium against Brazil – none of these nations has direct scheduled flights between them. The only other team in the competition which Uruguay has direct flights to is Brazil, while the latter lacks non-stop service to Russia, Croatia, Sweden and as already stated, Belgium. anna.aero has left out domestic markets from this analysis as no country can play itself at the World Cup of course! 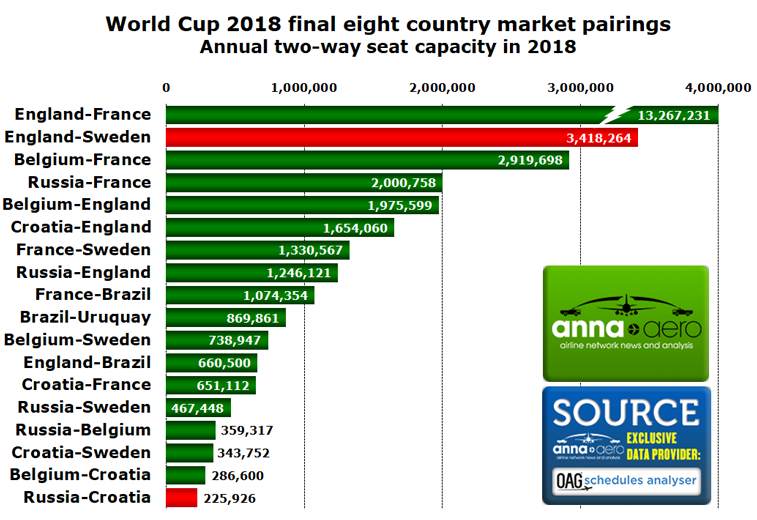 Airport rankings give it to England

With Harry Kane currently leading the FIFA World Cup 2018 Golden Boot competition with six goals (after the group stage and last 16 knockouts), it seems fitting that the number one airport within the remaining countries fighting it out for the title is also in England. London Heathrow is top of the league with it currently 16% bigger than Paris CDG when it comes to annual departing seat capacity. Could this aviation statistic be enough to make potential player of the tournament Kylian Mbappé from France quiver in his studded boots? Along with Heathrow, a further three English airports (highlighted in light red) make it into anna.aero’s 2018 World Cup airport dream team first 11. While England tops the table with four airports, it should be noted that France has two (highlighted in dark blue), along with Russia (grey), while Brazil (light green), Sweden (light blue) and Belgium (brown) all have one. 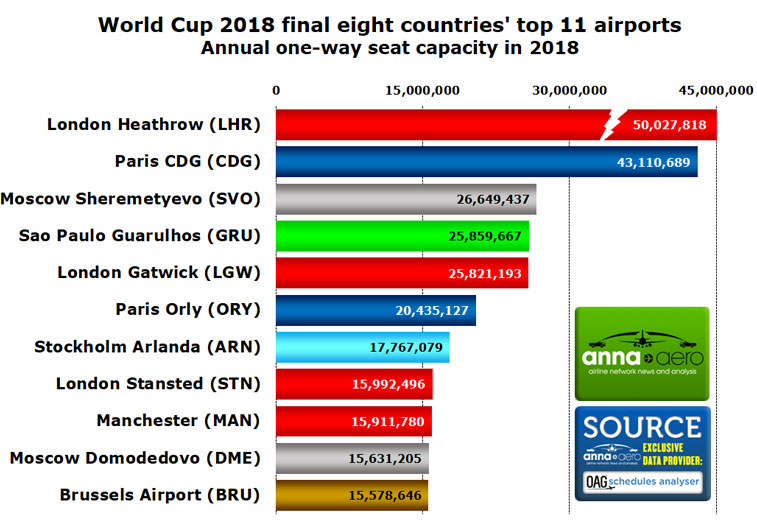 anna.aero knows that it takes more than one player to make a team, and outside of the first 11 down to 23rd place (the total number of squad players that you can take to a World Cup) there are other airports helping support their nations. While England tops the first 11 with four facilities, between 11th and 23rd place it only has two contending players – London Luton (17th; 9.4 million departing seats) and Birmingham (19th; 7.4 million). In fact, when it comes to substitutions the best country is Brazil, with it having five players on the anna.aero ranking bench, namely Sao Paulo Congonhas (12th; 14.1 million), Brasilia (13th; 11.3 million), Rio de Janeiro Galeao (16th; 9.8 million), Belo Horizonte (21st; 6.6 million) and Rio de Janeiro Santos Dumont (22nd; 6.5 million). France has three on the subs bench, including Nice (18th; 8.8 million), Lyon (20th; 6.9 million) and Toulouse (23rd; 6.3 million) while Russia has two, namely Moscow Vnukovo (14th; 10.2 million) and St. Petersburg (15th; 9.8 million). With France and Brazil having the greatest geographical spread of airports, could their individual talents help support the nations to the final? With Brazil now out of the race, it seems that France will face England to take the World Cup title when relating to the aviation world. 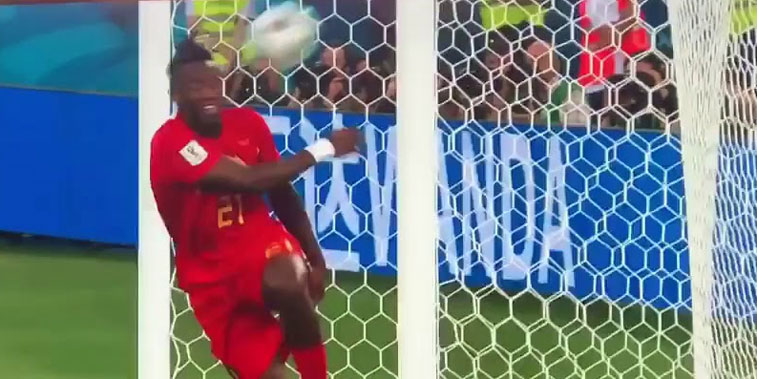 Belgium are presently third in the world when it comes to the FIFA World Cup Ranking, however looking at aviation data, it only has one player (airport) in the anna.aero dream team first 11, with Brussels ranking 11th behind four English airports, two French, two Russian and one Swedish and Brazilian hub. It also has zero airport players on the subs bench. One person that is wondering if he will be able to beat the odds against Brazil, and not hit himself in the face again with his goal celebration, is Michy Batshuayi. You need to watch the clip of him doing this…one of the best moments of the World Cup so far!