Azerbaijan market set to grow 8.7% in 2018; low-cost sector now accounts for over 10% of seats; seven new airlines this year 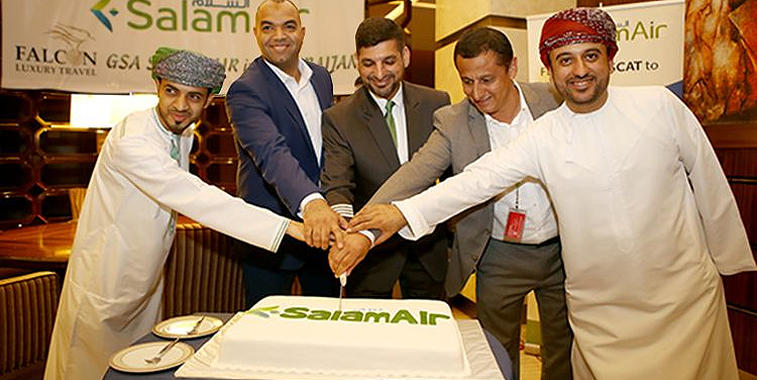 SalamAir commenced flights to Baku from Muscat on 14 June, a service that continues to Tbilisi in Georgia. To greet the Omani LCC’s arrival, Baku Airport baked a cake. Among those helping to cut the tasty treat at the launch were Captain Mohamed Ahmed, CEO of SalamAir (centre) and Pərviz Musayev, MD, Falcon Luxury Travel (second right). The carrier’s inauguration to Azerbaijan has contributed to the 8.7% growth that is forecast for the country market in 2018.

Azerbaijan sits on the edge of the Caspian Sea, nestled between Russia, Georgia, Armenia and Iran. Home to 9.9 million people according to 2018 estimates, roughly 44% of inhabitants live within the metro boundary of the nation’s capital, Baku, a city which is also home to the country’s busiest airport – Baku Heydar Aliyev International. Along with this facility, the country is home to four more commercial airports in 2018, namely Ganja, Nakhchivan, Qabala and Lankaran. While Baku is the location for the majority of seats, capacity from these four airports combined will grow by 10% this year versus 2017 based on OAG schedules, with over 390,000 seats being offered.

Azerbaijan will see 5.94 million scheduled seats in 2018 based on data extracted from OAG, an 8.7% increase versus the 5.47 million seats flown in 2017. The nation’s leading airport is Baku, a facility which will see 5.55 million two-way seats in 2018, up 8.6% versus 2017. Since 2009, the Azerbaijan market has more than doubled, growing 118% between 2009 and 2018. Overall the capital city airport is the major player in the Azerbaijani market, accounting for 93% of all seats in 2018. Over the past decade, Azerbaijan has only encountered one year of seat capacity cuts, with the market shrinking by 1.5% in 2015, a result of scheduled seat capacity being reduced at the nation’s regional facilities. 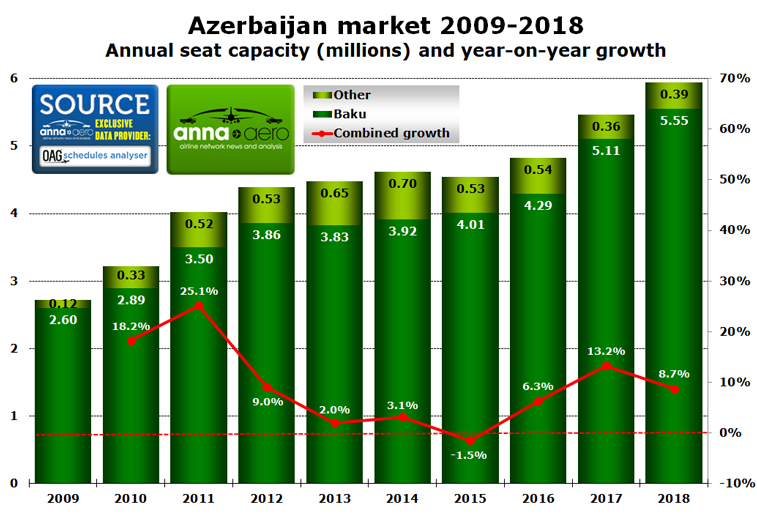 Unsurprisingly, Azerbaijan Airlines is the leading carrier in its home market, accounting for just under 44% of the country’s market share in 2018. However, the expansion of other airlines has meant that national carrier’s market share will drop 2.3% this year from the 46% result it recorded in 2017. Another factor which has impacted this outcome is the entry of multiple new carriers into the market this year, including Arkia Israeli Airlines, Etihad Airways, flynas, Gulf Air, Iran Air, Nordwind Airlines and SalamAir. Of Azerbaijan’s 34 serving airlines in 2018, only six are reporting capacity cuts, with four of those being in the top 12 carrier rankings. Outside of the nation’s leading airlines, Uzbekistan Airways (26th largest airline; seat capacity down 14%) and Belavia (28th; -7.9%) are the others seeing cuts. 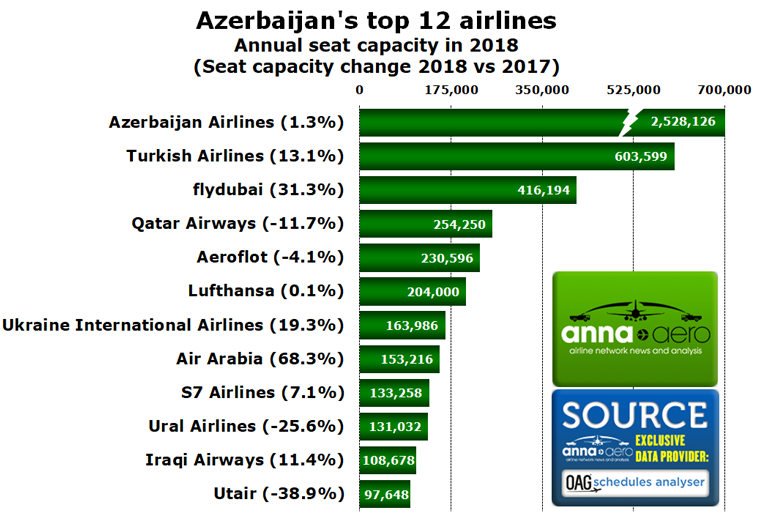 The leading airline for growth among Azerbaijan’s top 12 carriers is Air Arabia, with the Sharjah-based airline increasing its seat capacity to the Caspian Sea nation by over 68% in 2018. One factor which has allowed the airline to achieve this result is due to it launching flights between its home base of Sharjah and Qabala, a city some 230 kilometres west of Baku. The carrier has also expanded its weekly frequencies on its service from the UAE airport to Azerbaijani capital. While many airlines have grown and others have entered the market, a few carriers have decided to pull operations from the nation. Among those to have left the market since January 2017 are ATA Airlines of Iran and Pobeda, when referencing OAG schedules.

This summer there are 1.89 million seats between Azerbaijan and the nations of the Middle East, up 35% compared to the 1.39 million seats in the market last year. This growth has lead to the Middle East becoming the second most popular region, in terms of seat capacity, from Azerbaijan, overtaking Western Europe which drops to third, with the latter having only reported a small 0.6% increase in seat capacity this year. East and Central Europe remain the most popular geographical region from Azerbaijan, with capacity growing 2.0% last year to 2.07 million seats. This region is home to Azerbaijan’s leading country market – Russia – a nation which will see seat capacity fall 4.9% this year based on current schedules. Turkey, Azerbaijan’s second biggest market, will see seats grow 4.6% this year versus 2017. 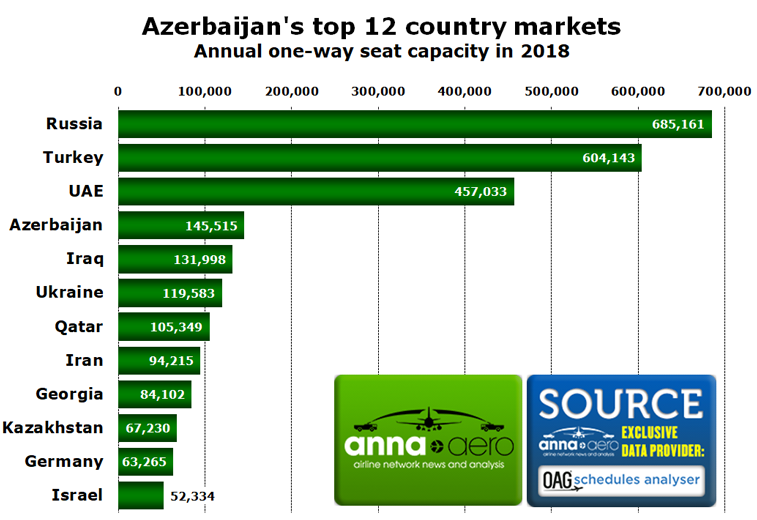 One country market which is reporting strong growth is the UAE, with seat capacity to the Persian Gulf country up 24% this year. Along with Air Arabia adding capacity between the two markets, Etihad Airways began flights between Abu Dhabi and Baku, while flydubai has also added more rotations between its base of Dubai and the Azerbaijani capital.

Outside of the top 12, a market showing great strides in 2018 is Kuwait, with capacity up by 149% on this country pairing. This is due to Wataniya Airways operating for its first full-year in 2018, while Jazeera Airways has added an extra weekly frequency to its route from Kuwait City to Baku this summer when compared to S17. Looking ahead for the rest of this year, there are currently no further routes planned from Azerbaijan’s leading airports. 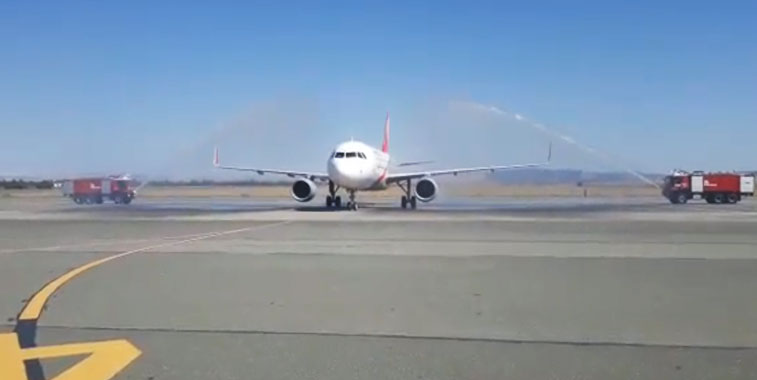 On 27 June Air Arabia launched flights between Sharjah in the UAE and Qabala in Azerbaijan, with the latter airport greeting the first flight with a water arch salute. This launch has helped the LCC sector to achieve its first double-digit result in Azerbaijani market share for 2018, with the low-cost market growing 38% this year to achieve an 11% share of all seats for 2018. Along with Air Arabia, another LCC expanding from Azerbaijan in 2018 is SalamAir.