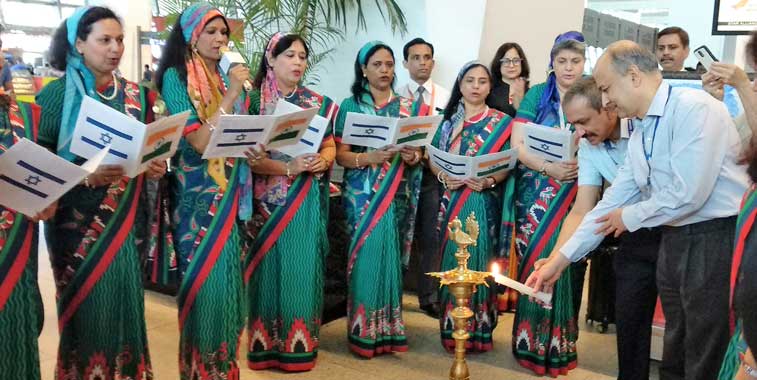 Indian airports have experienced raid growth over the past 10 years. They welcomed more than 308 million passengers during the financial year 2017/2018, a significant 184% increase compared to FY08/09. The country’s busiest airport, Delhi, welcomed a new service to Tel Aviv with national carrier Air India on 22 March.

India has experienced a rapid rise in air traffic over the past 10 years. During the financial year 2008/2009 (FY08/09 – April 2008 – March 2009) Indian airports handled 108.88 million passengers. By FY17/18 this had grown significantly to 308.75 million, representing an increase of 184%. During this time the Indian market only experienced one decline in traffic when passenger figures dropped by 1.9% in FY12/13, before returning to growth in FY13/14. The strongest 12-month increase in traffic was experienced in FY16/17 when total passenger numbers grew by about 19%. International and domestic passengers numbers have both been growing, but it is internal services that account for the most traffic. In FY08/09 domestic passengers accounted for 71% of all traffic flying through India’s airports. By FY17/18 they represented 79% of the market.

International passengers double over past 10 years

The number of international passengers passing through Indian airports has more than doubled over the past decade. In FY08/09, 31.58 million international passengers were handled. By FY17/18 this had grown to 65.48 million, representing a growth rate of 107%. International traffic grew consistently during this period with no year-on-year cuts in any of the 10 financial reporting periods. The strongest 12 months for growth was FY17/18, with passenger numbers up by 10% compared to FY16/17. The smallest increase over the period came in FY12/13 with traffic growing by 5.5%. 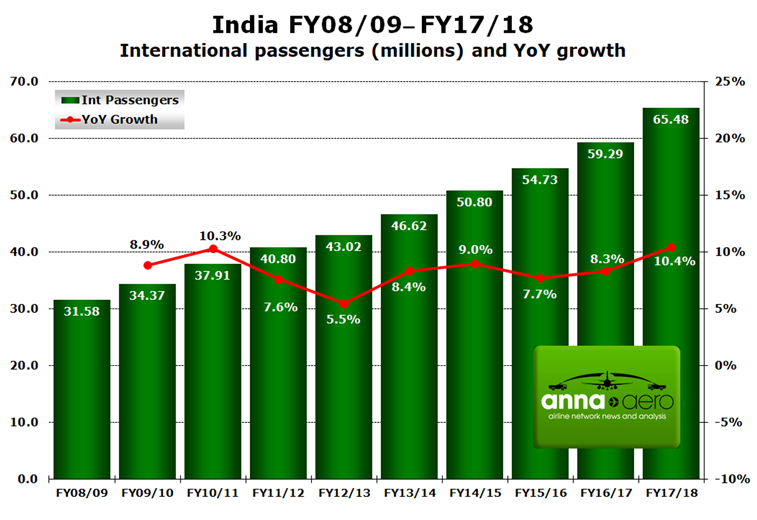 According to OAG schedule data for the week commencing 31 July, the three largest international routes from India in S18 are the services from Mumbai, Delhi and Kolkata to Dubai. The Mumbai – Dubai link will see 117 combined weekly flights operated by seven different airlines, providing more than 27,000 one-way seats. Dubai is the single biggest international destination from India this summer with 132,000 one-way seats on offer from all Indian airports. The largest international country markets, based on weekly capacity for S18 are: the UAE, Saudi Arabia and Singapore. The largest European market is the UK.

Domestic passenger numbers in India more than trebled from FY08/09 to FY17/18. There were 77.30 million passengers on internal Indian routes in FY08/09, and this increased by 215% to 243.28 million in FY17/18. Throughout most of this period, domestic passenger numbers enjoyed double-digit increases from one financial year to the next, although there was one period of decline in FY12/13, which saw traffic levels drop by 4.3%. They soon bounced back, with 5.3% growth reported during FY13/14. The strongest increases in domestic traffic over the past 10 years took place in FY15/16 and FY16/17, when passenger numbers grew by 21% and 22% respectively. 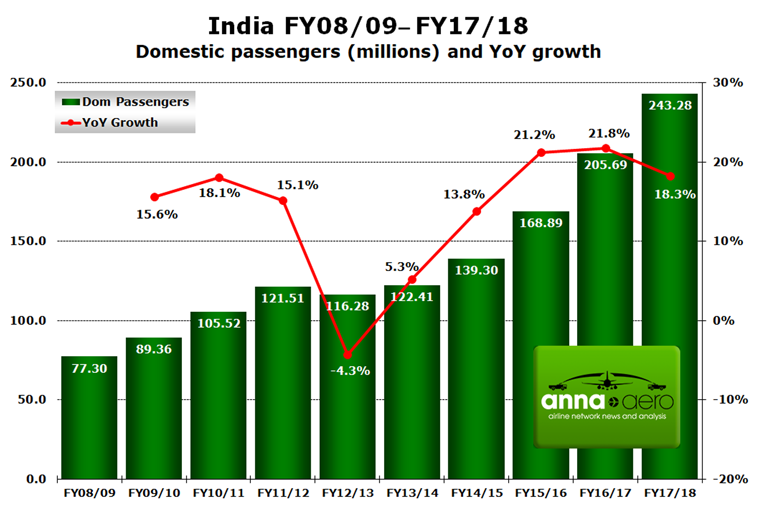 The largest domestic route in India this summer is Mumbai – Delhi. Schedules show that about 80,000 one-way seats will be available on this sector during the week commencing 31 July, with six airlines offering 443 combined flights. The number of daily departures on this high-density airport pair ranges from 61 to 65. Seven of the top 12 domestic sectors depart or arrive from Delhi, while five serve Mumbai. The largest domestic route that doesn’t serve either of these airports is the link between Hyderabad and Bengaluru.

According to schedule data, 85 Indian airports will welcome at least one scheduled service during the week commencing 31 July. Delhi is by far the largest airport in India, with Mumbai in second place. anna.aero’s Rest of the World Airport Traffic Trends database records that Delhi handled 63.45 million passengers in 2017, while Mumbai welcomed 47.20 million. Between them they account for one-third of the weekly departing seats available from all Indian airports in S18. Delhi alone provides 19% of the country’s departing scheduled flights during a typical peak week this summer. The Indian capital city is the largest departure point for both domestic and international services in the country. 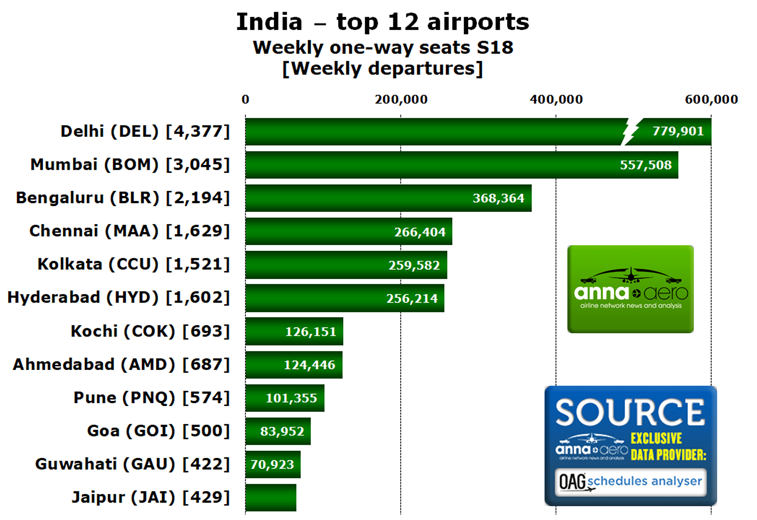 All of India’s top 12 airports have experienced an increase in peak summer capacity in 2018, compared to the equivalent period from last year. The strongest growth has come at Jaipur (26% increase in seats) and Bengaluru (24%). One contributing factor to growth at both airports has been an increase in capacity by IndiGo. The most marginal growth among the top airports has been at Mumbai, with seat numbers up 0.7%. Jaipur is a new entry among India’s top airports, and has displaced Lucknow, which ranked as the country’s 11th largest departure point in S17. The remaining 11 airports retain their place in the top 12, although several ranking positions have changed. One notable example is Chennai overtaking Kolkata for fourth position after witnessing a 21% increase in available seats this summer.

Seven of the top 12 airlines operating from Indian airports in S18 are full-service carriers, while five are LCCs. IndiGo is the largest LCC and largest airline in the Indian market. It will provide nearly 1.40 million one-way seats from Indian airports during the week commencing 31 July, accounting for 35% of the country’s total capacity. Most of IndiGo’s capacity is operated on domestic links, with internal Indian routes accounting for 97% of the airline’s weekly departing seats in S18. Its largest sectors are Mumbai – Delhi and Delhi – Bengaluru. The top seven airlines, and eight of the top 12, are Indian-based carriers. The remaining four are all based in the Middle East. The largest foreign carrier in the Indian market is Emirates. 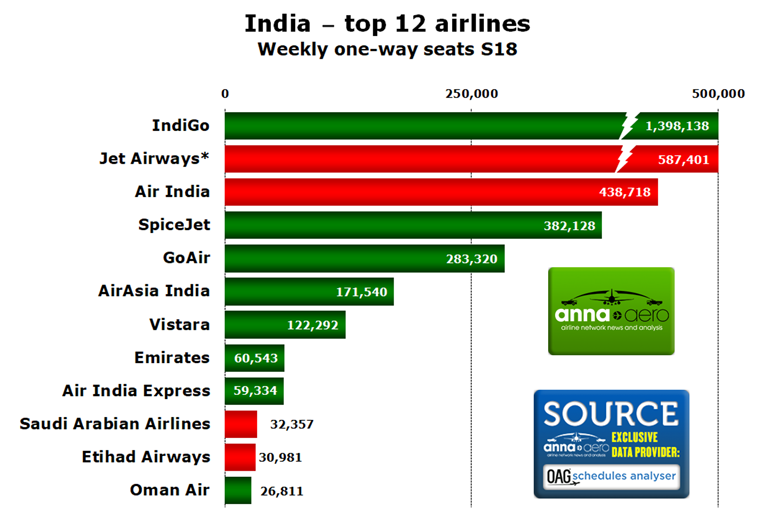 Eight of the top-ranked carriers have increased their capacity in the Indian market in S18 compared to the same period for 2017. The strongest growth has come at AirAsia India, with available seat numbers up by 55%. Four carriers have cut capacity in the market (highlighted in red). The largest decline has come from Etihad Airways, which has reduced seat numbers by 7.4%. The only change in the top 12 rankings compared to S17 is that Saudi Arabian Airlines has overtaken Etihad to claim 10th place. Saudia has also reduced its capacity from India, but only by a marginal 0.3%.

anna.aero’s New Routes Database currently records that a further 19 new routes will be launched to or from Indian airports by the end of this year. This includes 13 new domestic services from IndiGo. 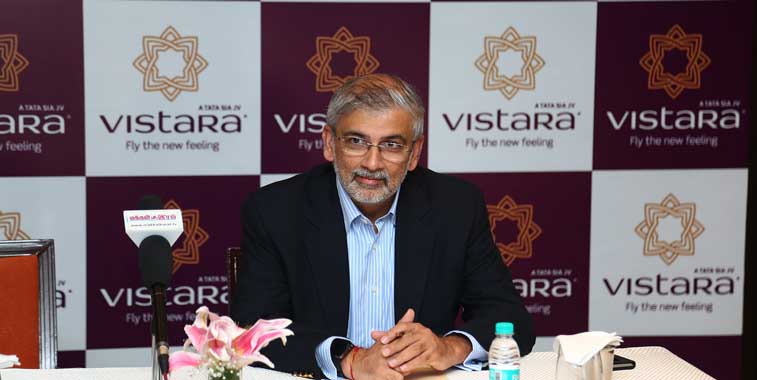 Vistara is one of seven full-service carriers among the top-ranked airlines in the Indian market. Its Chief Strategy and Commercial Officer Sanjiv Kapoor took part in a press conference at Chennai Airport to mark the airline’s inaugural service from Delhi on February 15. The largest capacity provider in India is IndiGo, one of five LCCs to make the top 12.