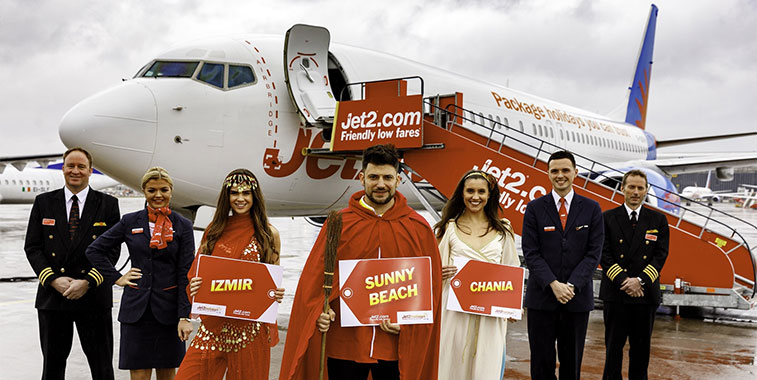 The UK’s biggest airport outside of London – Manchester – is also home to Jet2.com’s biggest base in S18, with over 50,000 weekly seats on offer. This position is set to be maintained as the LCC has five new routes planned from its largest base, adding a three times weekly service to the new Spanish airport of Corvera, as well as a weekly (Saturdays) operation to the French destination of La Rochelle from next May, while flights to Bourgas (serving Sunny Beach), Chania and Izmir (promotion of which is pictured above) are also expected when referencing the airline’s booking engine.

Jet2.com, the UK’s sixth largest airline (based on OAG seat capacity for 2017), has its biggest base at Manchester. Its operation at the UK’s biggest airport outside of London offers over 50,000 weekly (w/c 5 July) one-way seats spread across its 42 destinations during S18. To put its size into context within the airline’s other operations, Manchester provides more than 16,000 extra weekly one-way seats than its next largest base at Leeds Bradford (34,248 weekly one-way seats) and it is bigger than its #3 and #4 hubs at London Stansted (27,671) and Birmingham (22,601) combined. Comparing Jet2.com’s operations at Manchester alongside Europe’s other LCC’s main bases, it is slightly smaller than Wizz Air’s Budapest hub (59,780 weekly one-way seats), its second largest operation, and over 100,000 weekly seats smaller than Norwegian’s largest base at Oslo. However it is slightly larger than Ryanair’s 12th largest operation at Porto, and it offers around 1,500 less weekly seats than easyJet’s 12th biggest base at Berlin Schönefeld.

Base triples in size

Since 2009, Jet2.com is expected to more than triple the size of its Manchester operation from 0.42 million one-way seats to a forecast 1.57 million in 2018. In 2009, Leeds Bradford was the LCC’s largest base (1.02 million one-way seats), followed by Manchester in second, and then Belfast International (0.2 million). Last year, Leeds Bradford was the airline’s second largest operation (1.01 million), having remained static since 2009, while Belfast International was Jet2.com’s 17th biggest airport operation in 2017 (0.17 million), witnessing a capacity cull since 2009. By contrast, its East Midlands (fourth largest in 2017), Glasgow (fifth) and Newcastle (sixth) operations have all improved their respective rankings over the period being analysed. 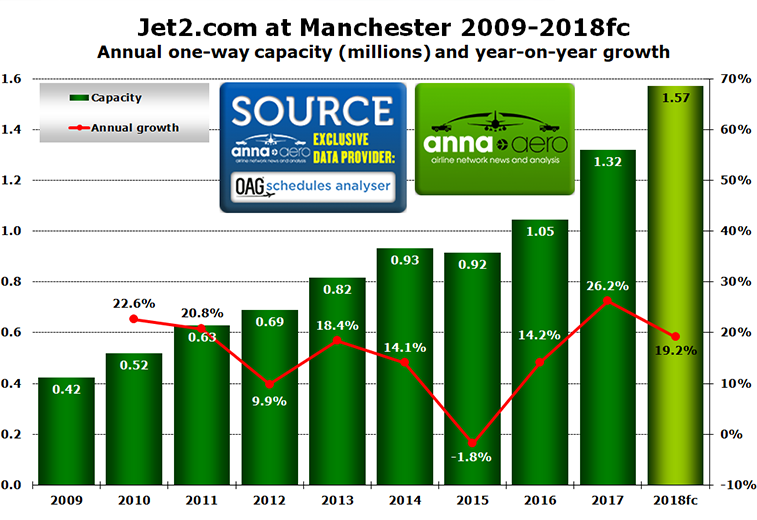 The average annual seat growth that Jet2.com achieved in the 2009-2018 (forecast) period was 16%. Back in 2009, the LCC was responsible for 4.4% of Manchester’s capacity. This result peaked last year when the figure had climbed to 8.0%. The only time the airline’s share fell year-on-year, before recovering again, was in 2015, when Jet2.com also marginally reduced its annual capacity at the airport.

Interestingly, only one of the top 12 routes served by the LCC from Manchester is going to be operated with the exact same number of weekly seats in this year’s sample week as they were in the same period in 2017. This indicates that despite the top 12 being some of the airline’s most important routes, that it is still adjusting its capacity to suit the fluctuating market demand. In July this year, Jet2.com is offering 238 weekly departures from its biggest hub, with the top 12 representing 54.6% of this total. In the same month last year, the LCC operated less weekly flights (204), with the top 12 sectors offering 18 weekly services less than the top 12 in 2018, although their combined share of the total number of rotations was marginally higher at 54.9%. 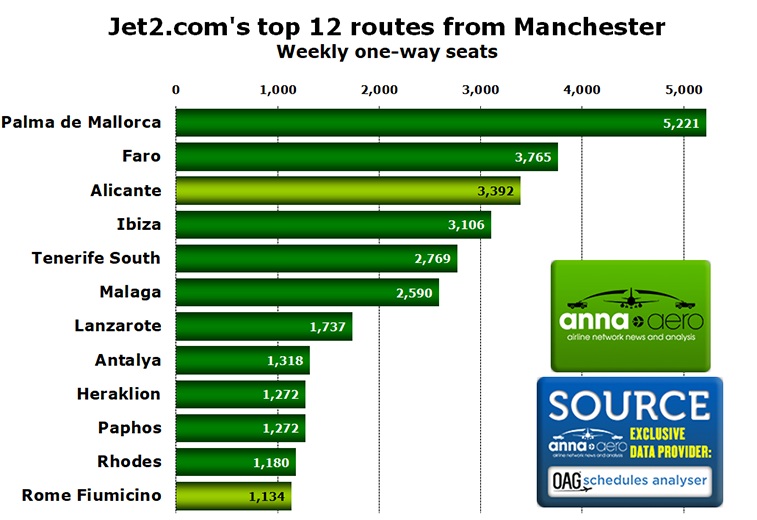 There are two newcomers to the top 12 routes served by Jet2.com from its largest base, these being Antalya (up to eighth from 29th position last year) and Rhodes (up to 11th from 18th). Unsurprisingly, the Turkish destination was also the airline’s fastest growing route, posting a significant 133% annual capacity increase, ahead of Rhodes (32%) and Lanzarote (28%). Lost from last year’s top 12 were Murcia and Venice Marco Polo, both of which failed to grow their respective capacities year-on-year. Only two of the top 12 routes have witnessed capacity cuts in the past 12 months (highlighted in light green).

Despite being by far and away the largest market which Jet2.com serves from Manchester, Spain is not a market where the LCC seems to be prepared to take its foot off the capacity gas pedal, as the leading country market will observe double-digit (+10%) annual seat growth this year. The fastest growing nation however is Turkey, which has witnessed a 110% spike in its capacity from Manchester this summer, enabling it to climb from the being the airline’s seventh most important country market to fifth. Jet2.com has increased its weekly capacity to Antalya (+132%), Dalaman (+132%) and Bodrum (+55%) year-on-year. Other fast-growing country markets for the carrier include Greece (+30%), Portugal (+18%) and Italy (+16%). 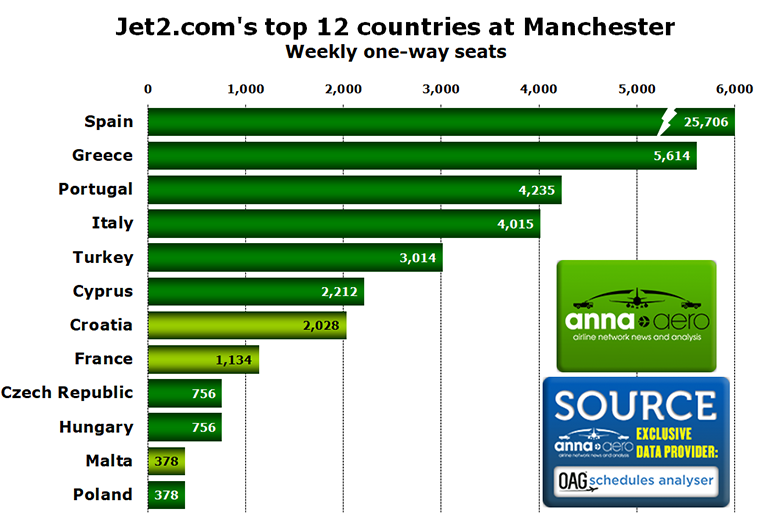 Its not all capacity growth for the airline at Manchester. Three country markets, namely France (-14%), Malta (-6%) and Croatia (-4%) (highlighted in light green), have all seen their respective weekly seats trimmed. Additionally four nations have seen capacity remain static over the past 12 months, with these being Cyprus, the Czech Republic, Hungary and Poland.

New Spanish airport up next

Looking ahead, the airline has five new routes planned from its largest base, as it plans to add a three times weekly service to the new Spanish airport of Corvera (RMU), which is replacing the existing Murcia Airport. Starting in April next year, Jet2.com will also serve Corvera from Leeds Bradford. The airline also anticipates adding a weekly (Saturdays) operation to the French destination of La Rochelle from next May, while flights to Bourgas, Chania and Izmir are also expected when referencing the airline’s booking engine. 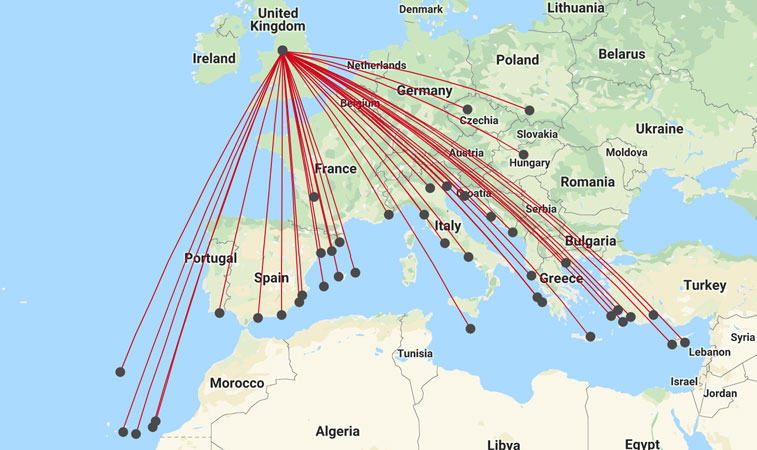 Jet2.com flies to 42 destinations in 12 countries from its biggest base at Manchester (w/c 5 July). The LCC predominantly offers flights to holiday destinations across the Mediterranean, but its network from the UK airport remains peppered with city break locations like Krakow, Prague, Rome and Budapest. For S19, new routes planned from the airport by the carrier include La Rochelle, Bourgas, Chania and Izmir.