Sky Airline returns to growth following LCC restructure; international market accounts for 18% of seats but some routes have been chopped 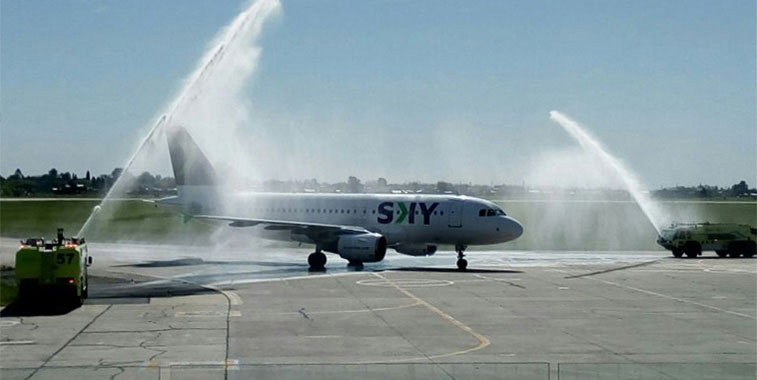 Sky Airline launched operations between Santiago and Rosario on 3 October, with the latter airport greeting the first flight with a water arch salute. The carrier, having reported a increase in capacity last year of just under 17% versus 2016, has slowed things down this year, with only 1.6% annual growth forecast, with the sudden surge in seat availability coming after the airline’s restructure into a low-cost operator. Just under five million seats will be on offer in 2018.

Founded in 2002, Sky Airline is presently the second largest airline in its home market of Chile after LATAM Airlines. According to its own website, it presently flies 26% of passengers in the Chilean domestic market. The carrier in recent years has transitioned into a LCC, coming at a time when the Chilean country market has been shaken up by the new entrant ULCC JetSMART, with the latter now the third largest airline in the country, having only launched in 2017 (2.08 million seats in 2018). Its fast-growing operation is now 46% the size of Sky Airline, but with a considerably large aircraft order (70 single-aisle Airbus units), JetSMART is likely to overtake Sky Airline in the coming years, with it only planning to welcome six A320neos over the next year or two.

Sky Airline’s seat capacity fell by over 12% between 2014 and 2016, following five years of consistent growth from 2009 to 2014. Due to increasing operating costs, the airline during this time decided to restructure and become a low-cost operator, helping to offset increasing costs. Since this transition, the airline has returned to growth, and between 2016 and this year, annual seat capacity has risen by just under 19%, with most of this growth occurring in 2017. In terms of scale, Sky Airline (4.87 million seats) is similar in size within the European market as Blue Air (5.13 million seats in 2018), Air India Express in the Asian sector (4.98 million) and Mango (4.6 million) of South Africa. 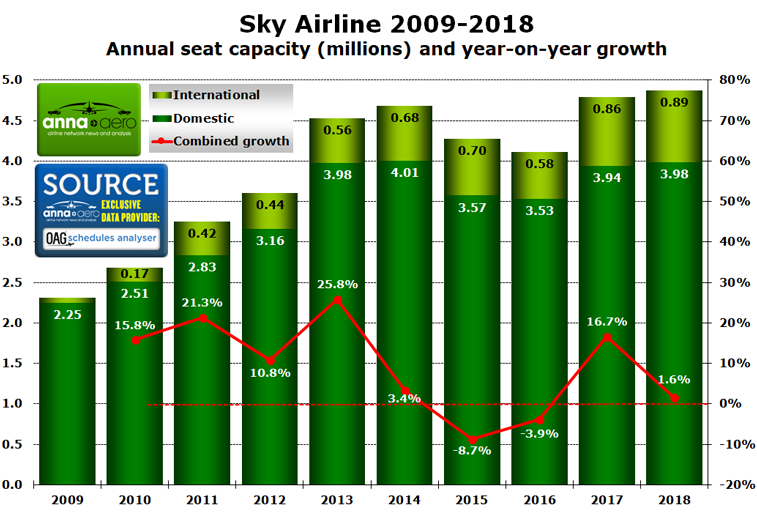 It is noticeable how much effort the airline has put into the international market since its restructure, with the carrier just falling short of 900,000 international seats in 2018, up 3.7% against 2017. This year international capacity will account for over 18% of seats, up from 17% last year, and up from only 2.7% in 2009. Presently the carrier operates five international routes, all from Santiago to: Lima in Peru; Buenos Aires Ezeira, Cordoba, Mendoza and Rosario in Argentina; plus Montevideo in Uruguay. However it appears that not all of the airline’s forays into the international sector have been fruitful. The airline appears to have ended flights to Florianopolis, Punta del Este and Rio de Janeiro Galeao, with all three no longer appearing in OAG schedules or bookable on the carrier’s website, routes that launched from Santiago in mid-December.

Santiago is by far the leading airport for Sky Airline, with the capital facility accounting for 46% of departing seat capacity in 2018, the same share it had in 2017. Overall the airline has increased its seat capacity from the Chilean capital by 3.7% in 2018 versus last year. In total nine of the 12 airports in the rankings have seen an increase in capacity from the carrier this year. Of the top 12, only two (highlighted in light green) are international sectors, with those being service to the Argentinean and Peruvian capital city airports. 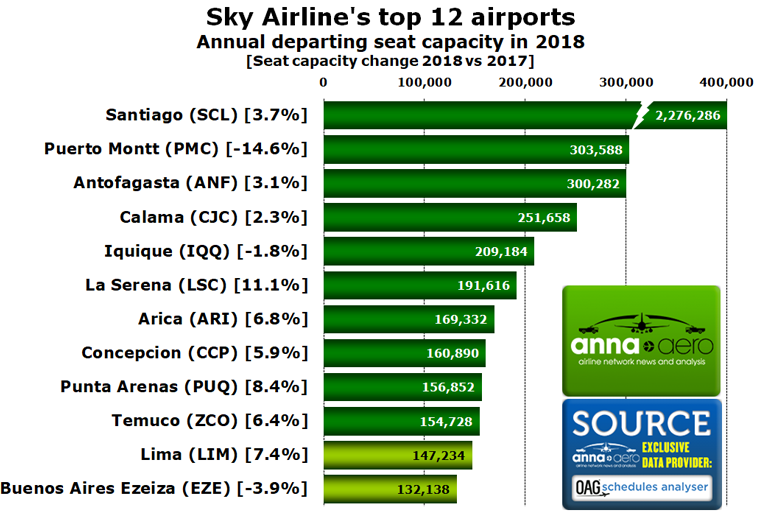 One airport which has seen a big cut in seat capacity is Puerto Montt, a facility which will offer just under 15% less seats in 2018 versus last year. The result of this decrease is due to frequency cuts on a number of flights into the airport. Along with Puerto Montt, another two airports in the top 12 to witness cuts from Sky Airline in 2018 include Iquique (down 1.8%) and Buenos Aires Ezeiza (down 3.9%) when referencing OAG schedules. Of the 20 airports which Sky Airline is operating from in S18 (winter in Southern Hemisphere), six are international. In total the carrier is currently operating 24 routes, with only four of those not involving the airline’s main airport, Santiago. The routes not touching the Chilean capital are: Calama to Concepcion; Antofagasta to La Serena; plus Puerto Montt to Balmaceda and Punta Arenas. 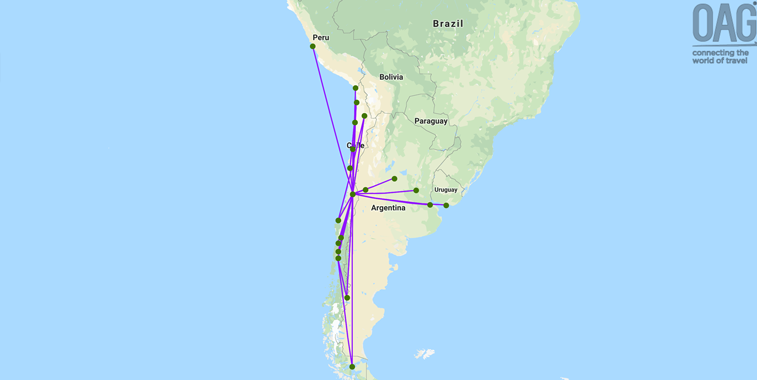 Sky Airline’s route map this summer consists of multiple domestic routes, along with services to Argentina, Peru and Uruguay from the Chilean capital of Santiago. Overall 82% of the airline’s annual scheduled seat capacity is filed to operate on domestic services, with the remaining 18% serving international links from Santiago, up from 17% in 2017.