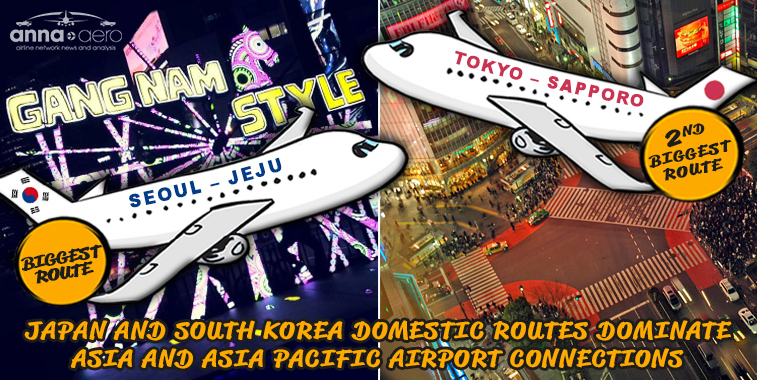 Although China is by far the biggest market in the Asia and Asia Pacific region for departing seats in S18, the three largest routes are all services in South Korea and Japan. The biggest route based on available weekly seats in S18 is the domestic South Korean sector from Seoul Gimpo to Jeju, followed by two internal Japanese connections from Tokyo Haneda. However, none of these routes are as busy as Shibuya Crossing which handles 1,000 people per minute.

In the final instalment of our peak summer regional review we take a look at Asia and the Asia Pacific countries. This reveals that China is by far the region’s biggest country market for departing seats and that Chinese airports and airlines lead the market in terms of available capacity. However, it is domestic services in South Korea and Japan that top the route table, with the Seoul Gimpo to Jeju sector claiming the double honours of being not only the region’s biggest airport pair, but the busiest in the world.

There are 41.98 million weekly departing seats available from airports in the Asia and Asia Pacific region in peak S18. This represents a 6.2% increase compared to S17. This makes it the largest and fastest growing of the three global regions anna.aero has analysed in recent weeks in terms of capacity. Asia and Asia Pacific airports handle about 8.09 million more weekly seats than those in the Americas and Caribbean, and 2.76 more than those in the EMEA region. This is equivalent to 24% more departing seats than airports in the Americas and Caribbean and 7.0% more than those in the EMEA region. About 71% of the departing capacity from Asia and Asia Pacific airports is scheduled for domestic operations, although it should be noted one-way seats on internal services are counted in both directions, while international capacity to destinations outside of the region is only counted in one direction. China is (predictably) the largest county market in the region for one-way seats by some distance. More than 15.70 million seats will be available from Chinese airports during the week commencing 31 July, which is equivalent to a whopping 37% of the region’s total capacity. Domestic links dominate departures from Chinese airports, accounting for 88%, or 13.79 million seats. However, China still manages to top the international capacity table with 1.91 million weekly one-way seats, significantly ahead of its nearest regional rival Japan, which offers 1.19 million seats to foreign destinations. 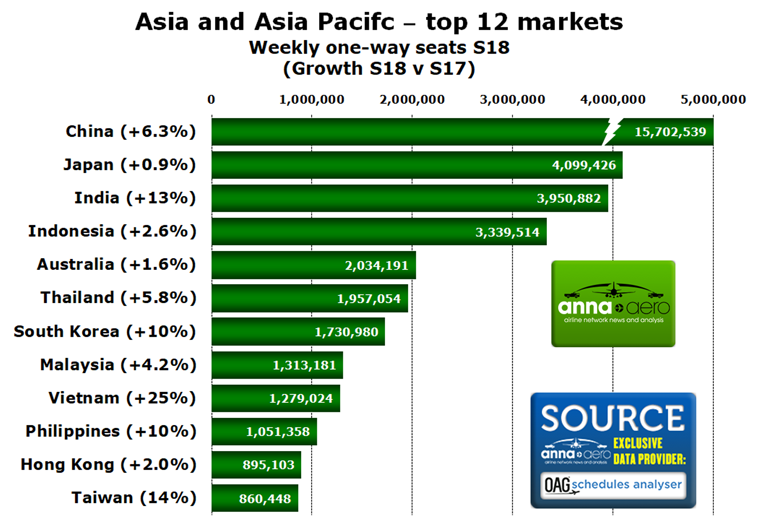 OAG schedules suggest that 59 countries in the Asia and Asia Pacific region will see at least one scheduled service during the week commencing 31 July, but that the top 12 markets account for 91% of the total departing seats. Eight of the leading Asia and Asia Pacific nations see most of their capacity operating on domestic links. The markets with the highest proportion of domestic seats are China, Indonesia (86%) and India (81%). Four of the top 12 country markets witness a higher proportion of departing seats on international links: Hong Kong (where all traffic is international), Taiwan (80%), South Korea (59%) and Thailand (52%).

All of the top-ranked Asia and Asia Pacific countries have witnessed an increase in capacity for S18 compared to the equivalent peak period last year. The strongest growth has come in Vietnam where total departing seat numbers have grown by 25% thanks to a 28% boost in domestic capacity and an 18% increase in international seats. The top 11 country markets have maintained the same ranking positions they occupied in S17. The only change in the top 12 has seen Taiwan replace Singapore as the 12th largest market after enjoying a 14% increase in seats, thanks largely to a 64% growth in its domestic capacity.

Four of the 12 busiest airports in the region in S18 are located in China (highlighted in red). No other country is represented by more than a single airport among the top 12. Together, the four Chinese facilities account for more than one-third of the total seats available from the region’s top 12 airports. Beijing offers the most departing seats in the region ahead of Tokyo Haneda. There are no Australian airports in the table, despite that nation representing the fifth largest country market in the region. The biggest antipodean airport is Sydney in 19th position. Domestic routes dominate departing capacity at half of the top 12 airports with Chengdu witnessing the largest proportion of internal seats (89%). Another six top-ranked airports see a greater proportion of seats available on international services. This is most extreme at Hong Kong and Singapore, since all scheduled flights from both airports are international links. 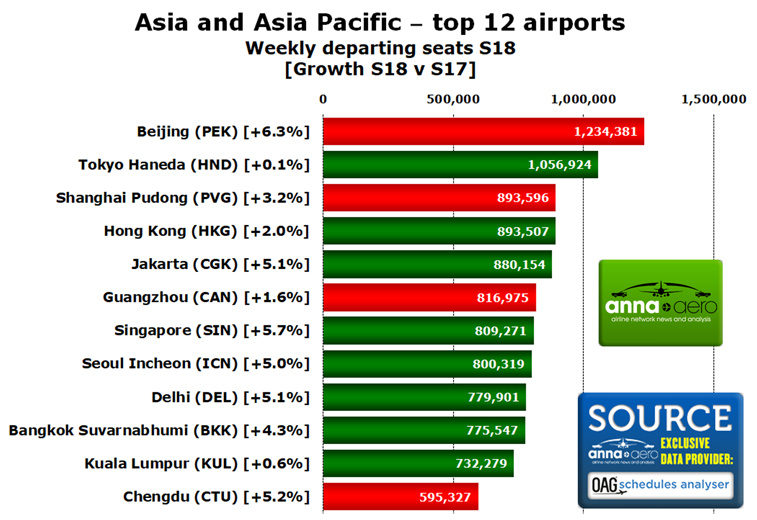 All of the top 12 airports witnessed an increase in departing capacity this summer compared to last year. The largest growth has taken place at Singapore, while the most marginal increases will be felt at Haneda and Kuala Lumpur. In total, 1,271 airports in the Asia and Asia Pacific region will see scheduled services during the week commencing 31 July, with 50 of these welcoming just one weekly flight.

Seven of the top 12 airlines for departing seats in the Asia and Asia Pacific region in S18 are Chinese-based carriers (highlighted in red). These seven airlines alone account for more than 10.16 million weekly seats between them, which is equivalent to 24% of the region’s total. The top 12 also includes two carriers from Japan and one each from India, Indonesia and Australia. The highest ranking non-Chinese carrier is All Nippon Airways. Ten of the top 12 carriers are full-service operators while the other two are LCCs. The highest-placed LCC is IndiGo, although AirAsia would be ranked as the largest regional low-cost operator if capacity from all of its various subsidiaries were combined. 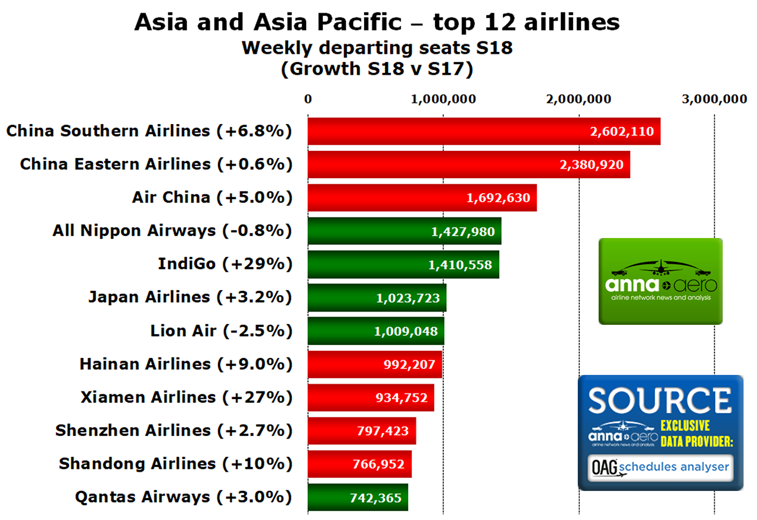 Ten of the top 12 carriers have experienced an increase in capacity this summer compared to the equivalent peak week in S17, with the exception of Lion Air and ANA which will see marginal 2.5% and 0.8% reductions respectively. IndiGo and Xiamen Airlines have upped their seat numbers the most, with the two carriers enjoying weekly capacity increases of 29% and 27% respectively. According to OAG data, 324 airlines will offer at least one scheduled departure from airports in the Asia and Asia Pacific region during the week commencing 31 July. The smallest carriers by capacity are Russian operators Petropavlovsk-Kamchatsky Air and Severstal Aircompany. The former will operate a single Russian domestic frequency between Anadyr and Petropavlovsk-Kamchatsky while the latter is scheduled to provide one weekly flight from Sovetsky to St. Petersburg.

China might be the biggest country market and provide the busiest airports and airlines in the Asia and Asia Pacific region, but it does not make it into the top eight largest routes, based on weekly departing seats in S18. In total 11 of the top 12 routes are domestic, including four in Japan, two in Indonesia and one each in South Korea, Australia, Vietnam, India and China. The only international sector among the top-ranked routes is the intra-regional link from Taipei Taoyuan to Hong Kong, which is in eighth place. The biggest airport pair by capacity in the Asia and Asia Pacific region this summer is the link between Gimpo and Jeju, which also claims the crown as the busiest route in the world. More than 175,000 weekly one-way seats will be available on this internal South Korean airport pair in S18, with seven airlines offering a combined 851 departures during the week commencing 31 July. The number of daily flights on this sector varies across the week from 119 to as many as 123. The Gimpo – Jeju sector is not the only route from the region to make an impact on a global level. anna.aero’s previous three weeks of analysis reveals that the eight busiest routes in the Asia and Asia Pacific region are also the biggest in the world in terms of weekly one-way capacity this summer. 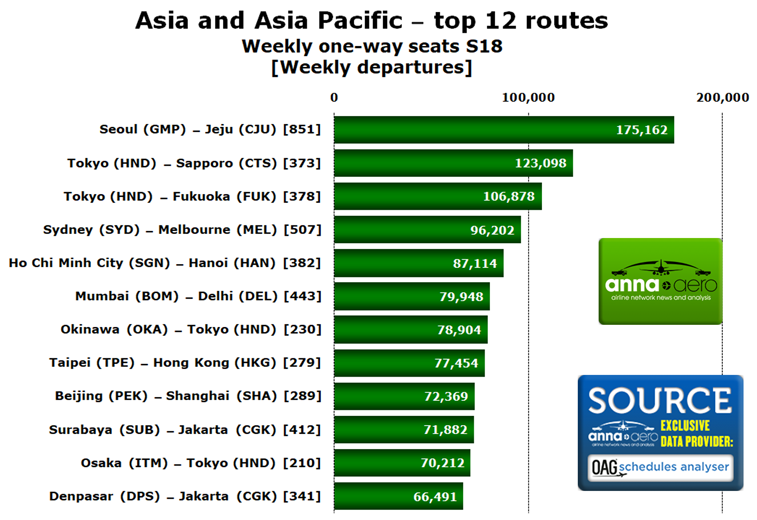 Haneda, features most frequently among the region’s top-ranked routes, acting as the departure or arrival airport for four leading Japanese domestic connections, the largest of which is the link with Sapporo Chitose. Five of the top 12 airport pairs have experienced an increase in weekly capacity this summer, with the strongest percentage growth coming on the domestic Vietnamese link between Ho Chi Minh City and Hanoi (20%). Seven of the routes have witnessed a decline in seat numbers, although most of these were marginal. The biggest cuts have come on the Taoyuan – Hong Kong airport pair, where there has been a 4.6% reduction in one-way seats. The smallest one-way sector scheduled to operate in the region is a link between Fakarava and Takume in French Polynesia. Air Tahiti will serve the sector once during the week commencing 31 July, using a twin turboprop.

This analysis used a number of assumptions. The Asia and Asia Pacific region includes all countries grouped into the following global groups by OAG: Asia: Central, Asia: North East, Asia: South, Asia: South East, and Southwest Pacific. Typical peak S18 capacity and frequencies are taken from OAG schedule data for the week commencing 31 July. Where comparisons are made with last summer, the data refers to the week commencing 1 August 2017. The capacity included in the analysis accounts for any flights departing from airports in the Asia and Asia Pacific region. This includes all domestic and intra- and extra-regional international flights. On domestic and intra-regional international links capacity is counted in both directions on an airport pair. For extra-regional international services, seat numbers are only counted in the outbound direction. It should be noted that OAG classifies part of Russia in Eastern Europe and part in Asia. Only the capacity relating to the Russian airports in the Asian segment is included in this analysis. 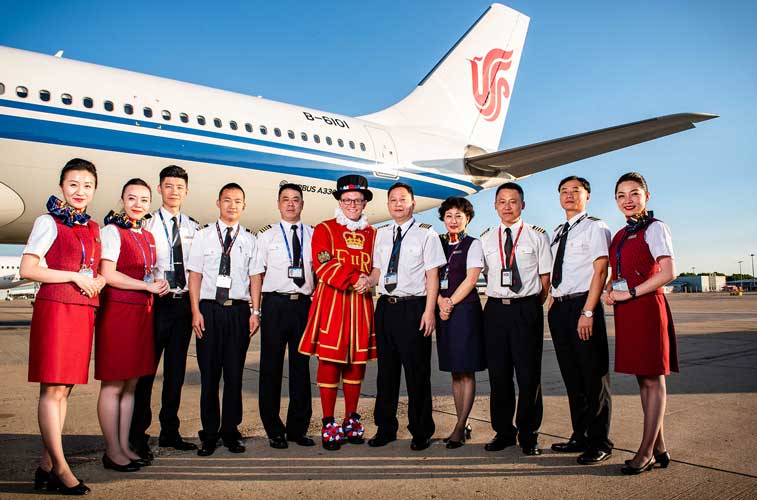 China is the largest country market in the Asia and Asia Pacific region accounting for 37% of all departing weekly seats in S18. Air China is the third largest carrier in the region. On 3 July it opened a new route from Chengdu – the 12th largest airport in Asia and the Asia Pacific – to London Gatwick. It marks the return of the London – Chengdu city pair which was last operated by British Airways back in January 2017.