Billund Airport shows off its second Arch of Triumph certificate 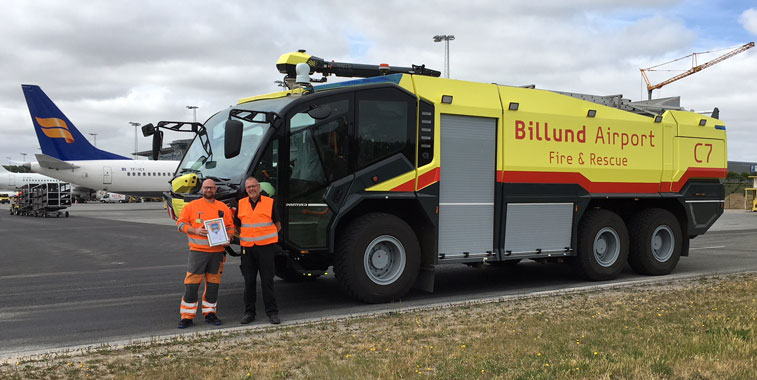 Standing proud with Billund Airport’s Arch of Triumph winner’s certificate, awarded to the Danish airport for the brilliant salute that it produced to greet LOT Polish Airlines’ new route from Warsaw Chopin, are Klaus Bergwill, Firefighter, and Steen Knudsen, Onsite Commander. Note also the new and shiny Icelandair 737 MAX 8 (registered as TF-ICY) behind.

This is the second time that Billund Airport has been the cream of the airport firefighting and new route launch marketing world. The first time was in May 2016, when the Danish facility welcomed the start of British Airways services from London Heathrow. That time it won with a tally of 30.4; last week it amassed a whopping score of 37.6, and at the same time it secured fourth position on the 2018 leader board. In doing so, it became the 14th European airport to be sent the prized anna.aero Arch of Triumph certificate in 2018. Keep Monitoring!!! 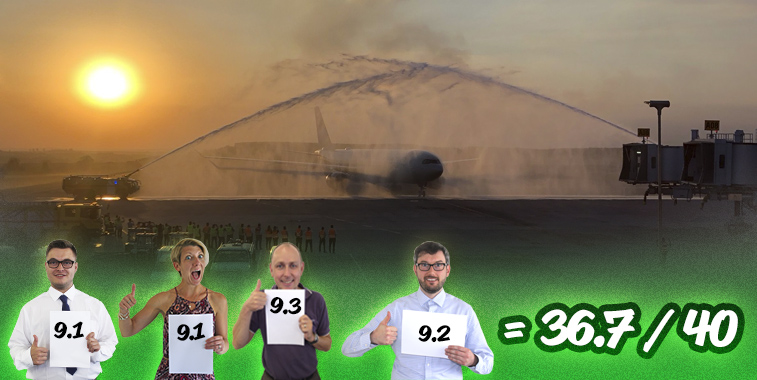 Judges’ comments: While the structure of this FTWA is not the best you will ever see…the sun and sky combination in the background is visually stunning and almost mesmeric. You can almost hear the airport ground staff saying at future route launch FTWAs…”that was good…but do you remember the one for the Aigle Azur launch as the sun set [in Portuguese of course]?” 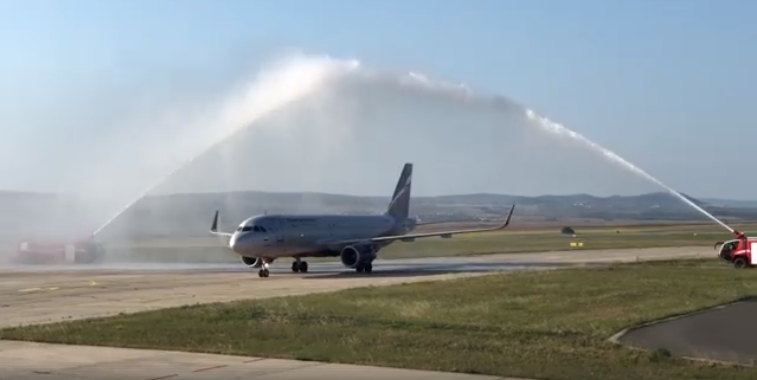 Judges’ comments: This is only the second-ever FTWA that we have received from Bourgas in Bulgaria. the first was back in April, when it sent in an entry for the second Public Vote week at the start of S18. That week it was up against 31 other FTWAs from around the world, and unfortunately for the Fraport-run airport, it did not make it into the top 10. Bourgas makes the top 10 this week however…as there are only 10 FTWAs!! 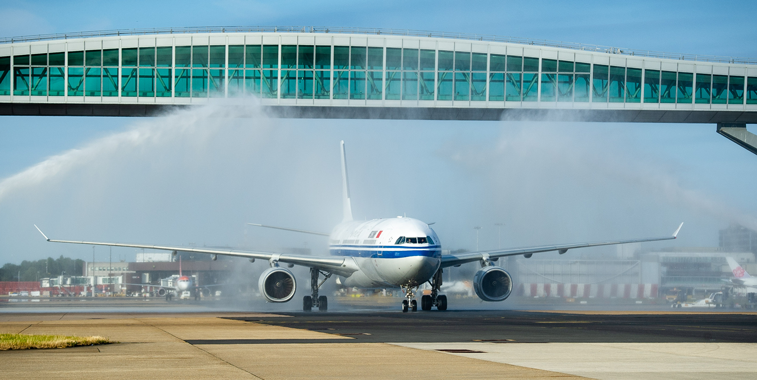 We see you photobombing in the background China Airlines….

Judges’ comments: This is third time lucky for Air China at Gatwick, having launched flights to the airport in 2012 from Beijing, before ending the service for a short period before returning in 2014, an operation which was terminated in October that year. This is the first time that we have been able to judge the Gatwick firefighters on an Air China launch (our competition did not exist in 2012), and with the carrier now serving the UK airport from a different city, maybe Chengdu’s charm can help it work well this time around… 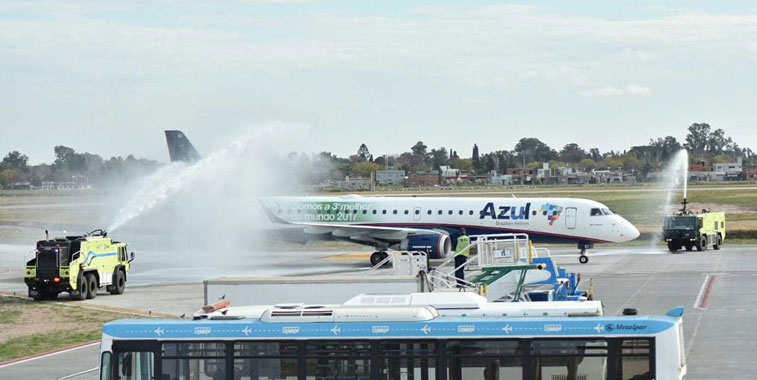 Judges’ comments: Even before we get started on the significant apron clutter (aircraft steps, staff member, airport buses etc.)…we do need to comment on the performance of the right-hand tender in this  picture. What is going on there?? The water jet is going up vertically about 10 feet…before hitting the ground just in front of the truck. The result…a classic ‘Big boy, Little boy’…now onto the apron clutter…oops we’ve ran out of words… 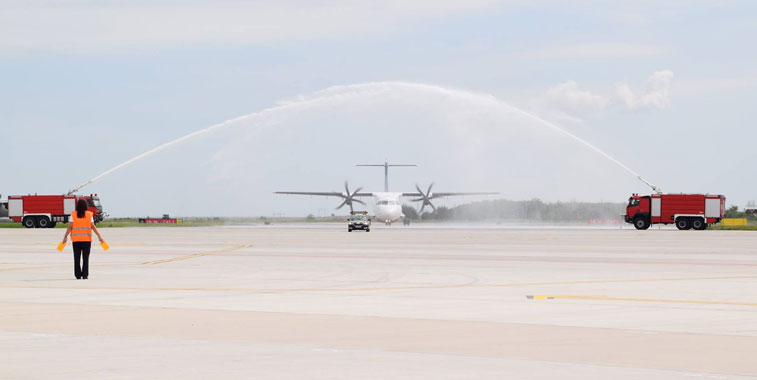 National airline returns to airport…get the fire trucks out!!

Judges’ comments: For those of you not aware, TAROM is the national airline of Romania. To not have your national airline serving your airport is clearly a big disappointment. So the fact that TAROM has started flying to Constanta again, after an eight-year gap…is news worthy of a fine FTWA. And this most certainly is one!! 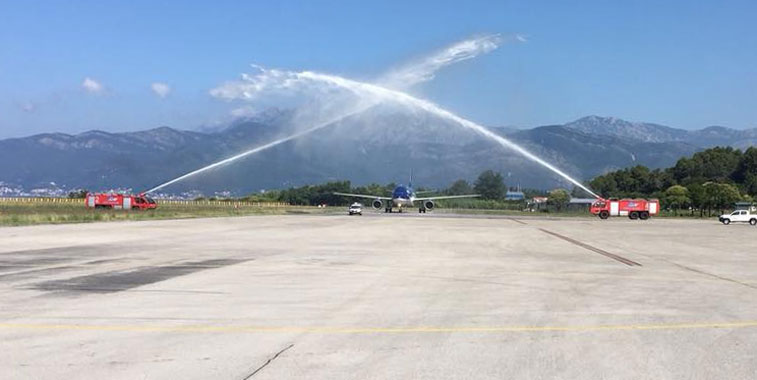 Judges’ comments: With that as a backdrop – namely the beautiful Orjen Mountains in Montenegro – why wouldn’t you want to recreate that stunning natural scenery in the form of an Arch of Triumph. The peak of the water jets perfectly matches those mountainous peaks in the distance…simply gorgeous!! We could have done with a bit less concrete in the foreground…but you can’t have everything… 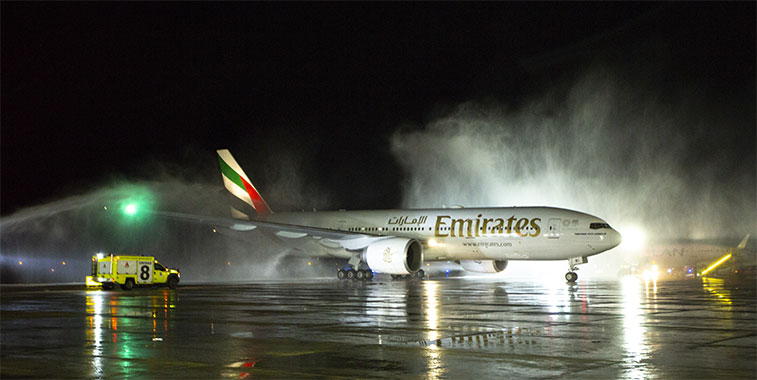 Judges’ comments: If the lighting is right, then a FTWA image taken in the dark hours of the day can be brilliant. If you can’t see what is going on with the water jets due to poor illumination then you may as well not bothered. So in Chile we have great apron lighting for the arrival of the Emirates aircraft, we just have a poor disorganised FTWA instead… 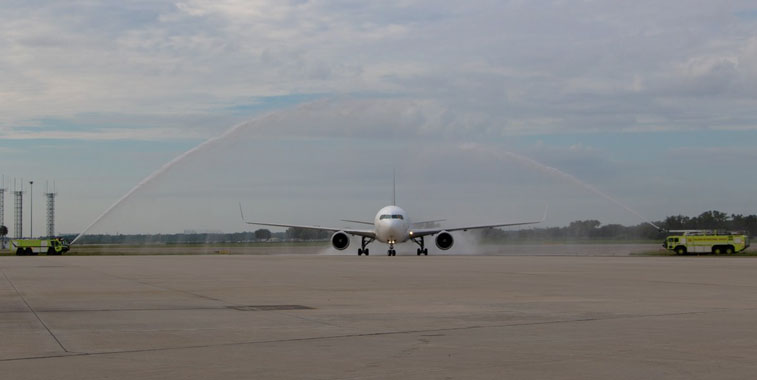 Is that the new ride at Walt Disney World Resort in the background…?

Judges’ comments: This FTWA at Orlando is known locally as the ‘Crush ‘n’ Gusher’ water arch, named after the water coaster in Walt Disney World Resort’s Typhoon Lagoon. This ride was the first water coaster to be built for a Disney water park. Themed as an abandoned and dilapidated fruit processing centre, guests may slide down three different slides: the “Banana Blaster”, “Coconut Crusher”, or “Pineapple Plunger”. These slides range from 410 to 420 feet (130 m) in length, but all send riders to a plunge into the “Hideaway Bay” pool. 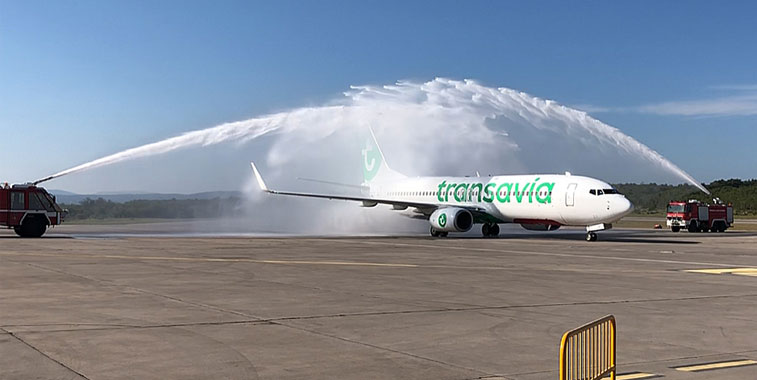 Judges’ comments: What a shame that this very fine FTWA has been spoilt by a bit of apron clutter. I personally can not look at the aircraft and the water for more than 0.5 seconds before my eye is drawn to the bright yellow metal fence in the foreground!! Were they expecting massive crowds on the apron to welcome this first flight from Eindhoven? 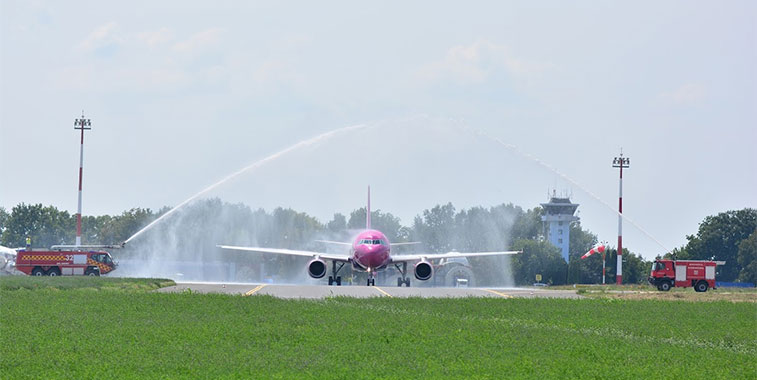 Does Iasi Airport really have 32 fire tenders? I don’t think so…

Judges’ comments: Given the size of Iasi Airport, which serves the fourth largest city in Romania, handling just over 1.1 million passengers last year, we very much doubt that it owns more than 30 fire tenders. It may well have had 30 fire tenders over the airport’s lifetime, but probably currently has around six. What is the most likely is that the regional facility has bought the left-hand tender from a larger airport…