Hurghada traffic up 65% during Q1 2018, however market still down on 2015; 59% of international travellers flying on charter services 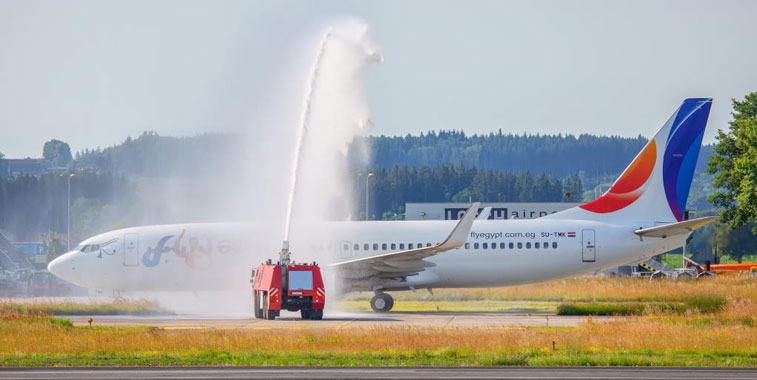 FlyEgypt commenced charter flights between Hurghada and Memmingen on 2 July, with the carrier planning to operate a weekly (Mondays) service on the route until 22 October. The first flight was greeted at the German airport with this water arch salute. According to data from the Egyptian Holding Company for Airports and Air Navigation (EHCAAN), 59% of passengers on international services from Hurghada in 2017 flew on charter flights. Germany is presently the leading country market from Hurghada when it comes to scheduled seats, with it accounting for 45% of the market.

Hurghada Airport is one of the leading facilities that acts as a gateway to the Red Sea, with the coastal airport being the destination for those wanting to escape to resorts including El Qoseir, Makadi Bay, Soma Bay and El Gouna. Along with leading resorts, the city of Hurghada itself is home to a population of over 240,000 people according to various sources. In total just over 29 million people travelled on air services from Egypt’s leading airports in 2017, with 16% of this traffic passing through Hurghada, with it greeting 4.73 million passengers last year. This makes the airport the second largest in the African country after Cairo, with the nation’s largest city accounting for 55% of passengers according to data from the Egyptian Holding Company for Airports and Air Navigation (EHCAAN).

While the impact of external factors in recent years has somewhat diminished the popularity of holidaying in Egypt, it is fair to say that the effects have not been as greatly felt at Hurghada as they were at Sharm El Sheikh, another leading gateway to the Red Sea. During the past 10 years, passenger numbers at Hurghada peaked in 2010 at 8.06 million passengers, nearly 2.8 times greater than the 2.91 million people that went through the terminals of the airport in 2016, the lowest year recorded. However, Sharm El Sheikh also peaked in 2010 at 8.69 million passengers, a result nearly five times more than the 1.76 million people who flew through the latter facility two years ago. Despite the falls encountered at both airports during this period, the two are showing signs of resurgence, with both posting +60% growth last year based on data obtained from EHCAAN. 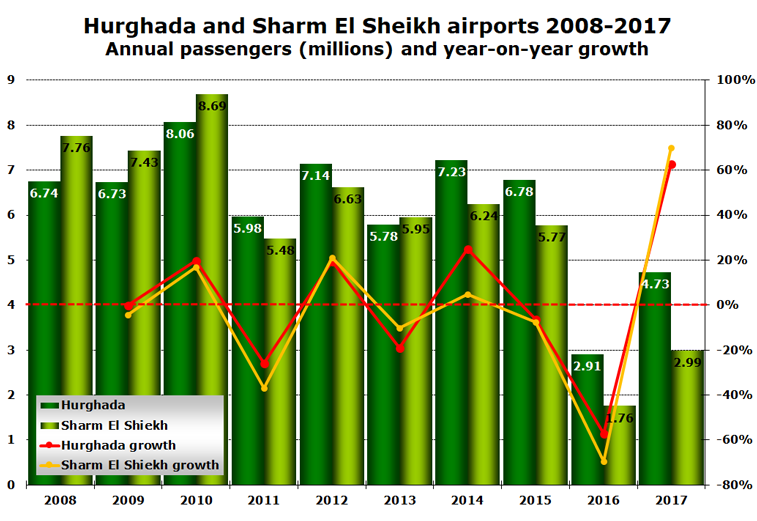 Of the 4.73 million passengers that passed through Hurghada in 2017, 89% of them travelled on international services, with just over half a million people flying on domestic routes. Of the 4.21 million non-Egypt bound passengers, just over 59% of them travelled on charter services when referencing EHCAAN data. This compares to a ratio of 33% scheduled and 67% charter in 2016, showing that scheduled operations are on the up.

Traffic is flying in 2018, however still down versus three years ago

During Q1 2018 Hurghada greeted just under 1.36 million passengers, up 65% when compared to the 825,000 that it processed during the same period of 2017 based on EHCAAN data. While this is a sound result when analysing the past year, it should be noted that traffic numbers are still 8.5% down versus Q1 2015, with 1.48 million people having been through the airport terminals during the first three months of 2015. Overall just under 6.78 million people flew through Hurghada in 2015, while last year saw only 4.73 million. Nevertheless, the market is showing that demand is not far of what it was before the tourism crisis, with traffic likely to be near the 2015 total this year. 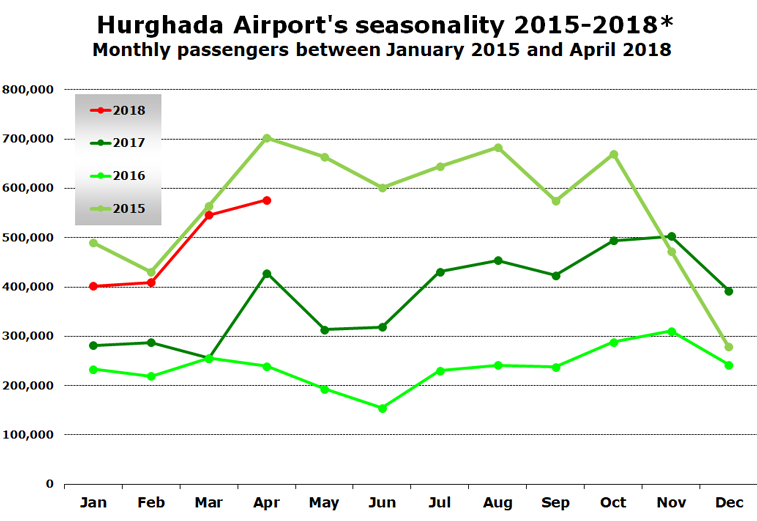 When placing Hurghada’s 2017 monthly passenger statistics into anna.aero’s Seasonal Variation In Demand (SVID) calculator, it delivers a score of 5.65 –  a “Good” rating. When doing the same for the airport’s 2015 monthly data, it generates a score of 5.49, also “Good”. This means that although passenger numbers have fluctuated by a large amount over the past few years, the seasonality of the airport has remained constant.

With nearly one million one-way seats in 2018, Germany is by far the leading scheduled country market from Hurghada, with it accounting for 45% of non-charter seats this year. Overall the market from Germany has grown by 41% when compared to the 689,000 one-way seats that were on offer in 2017. Following on from Germany, it is the UK which is the next biggest scheduled market for Hurghada, with seat capacity from the UK having grown 48% this year versus 2017. This result means that the UK is the fastest-growing top 12 scheduled country market from Hurghada in 2018. Along with these two nations, all but Egypt, Denmark, Ukraine and Slovakia are reporting double-digit growth in 2018, with the four countries mentioned going against the growth trend by reporting capacity cuts. 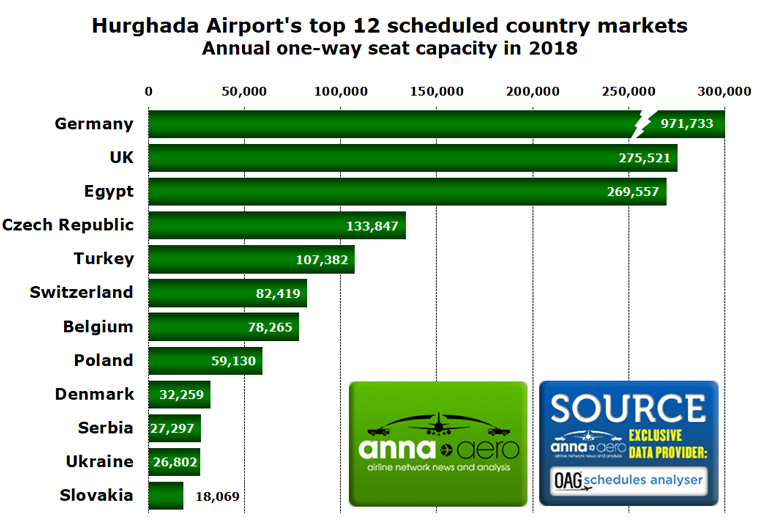 One nation which is a surprise to the top 12 is Turkey, a market which is usually associated with being a leading competitor to Egypt when it comes to inbound tourism. While it is presently Hurghada’s fifth largest scheduled market, it should be noted that this capacity made-up of just two routes, namely Turkish Airlines route from Istanbul Atatürk and Pegasus Airlines’ link from Istanbul Sabiha Gökçen.

With over 356,000 one-way seats in 2018, Condor is the leading scheduled airline from Hurghada this year, with it accounting for 17% of seats. Following Condor in second place is another German operator, with SunExpress Germany offering over 213,000 one-way seats this year. Overall four of the top 12 airlines at Hurghada in 2018 are based in Germany. The leading carrier for UK passengers is Thomas Cook Airlines, with it operating 9.0% of scheduled seats from the Egyptian facility in 2018. 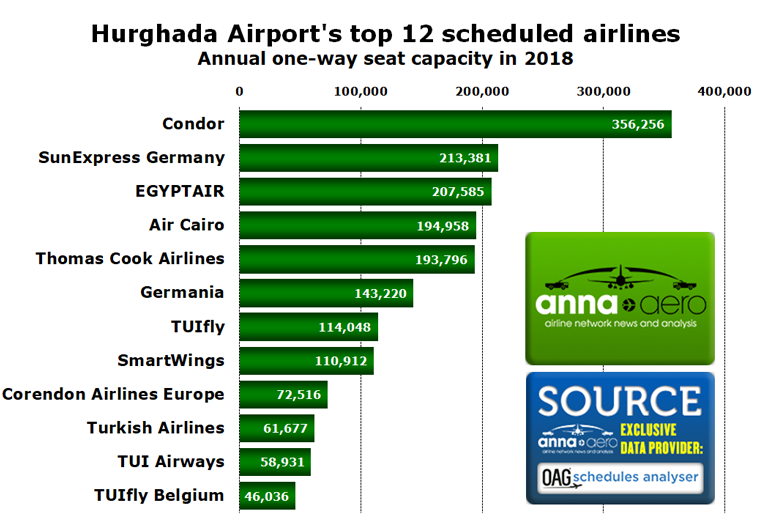 Outside of the top 12, a further 20 airlines are reporting scheduled services to Hurghada in 2018 with operations greater than 3,000 one-way scheduled seats, up from 17 in 2017. According to anna.aero’s New Route Database, TUI Airways is anticipated to introduce a weekly rotation to Hurghada from Doncaster Sheffield in April 2019. This is the only scheduled route presently in the database, although various sources indicate that many other charter services will be added from the airport. 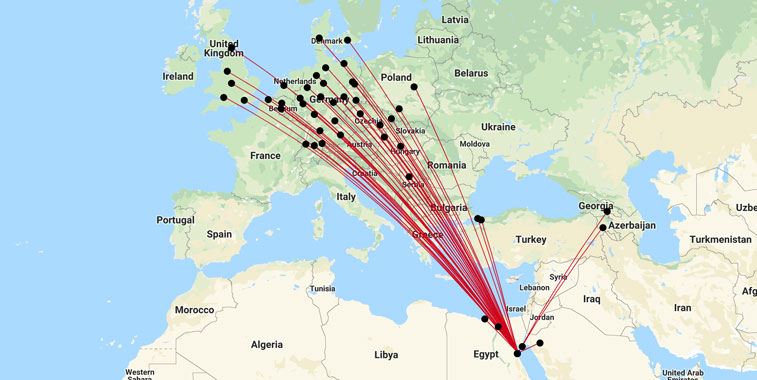 Hurghada Airport is home to a number of routes this summer, with its most popular markets being Germany and the UK. These two country markets combined accounting for 37% of scheduled seat capacity in 2018. The German market has saw seat capacity grow by 41% in 2018, while the UK market is up by 48%.