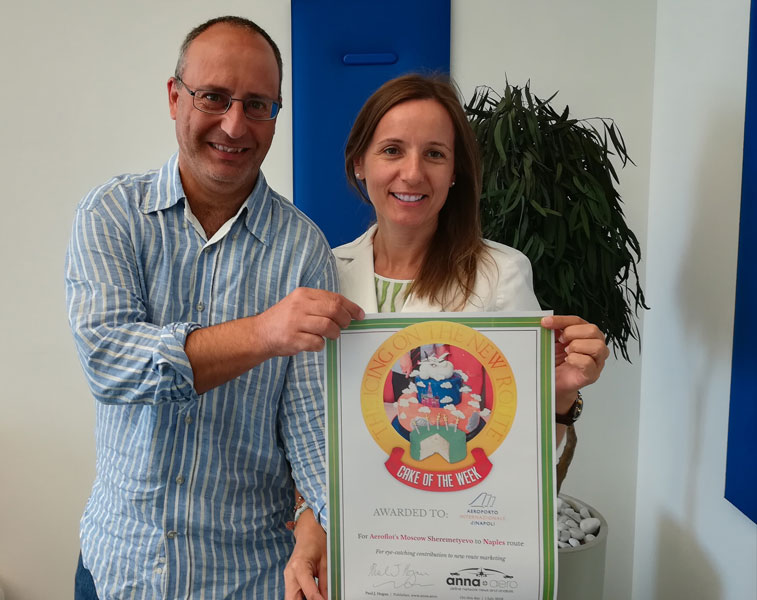 While many people are talking about the FIFA World Cup in Russia, Naples Airport in Italy is celebrating a different sort of Russian win, having taking the anna.aero Cake of the Week crown for the splendid bake it produced at the launch of Aeroflot’s new service from Moscow Sheremetyevo. Pictured with the award are the Italian airport’s Eugenio Biddiri, Traffic & Network Analysis and Daniela Procida, Carriers Management. 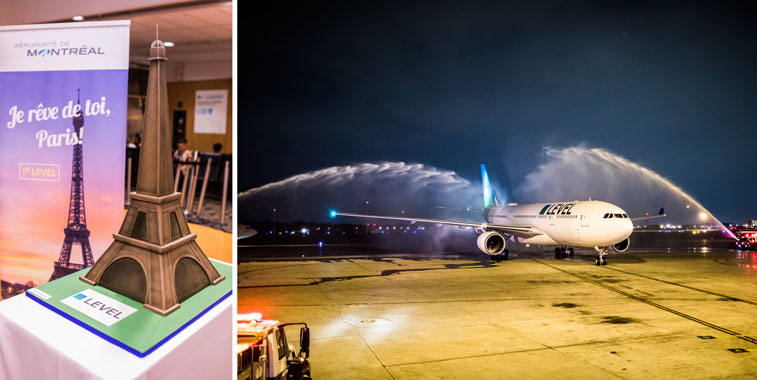 LEVEL launched operations between Paris Orly and Montreal on 2 July, a route that the airline will operate three times weekly using A330-200s, which unlike its Barcelona operation where Iberia flight numbers are used, this service is operated by OpenSkies under LV flight numbers. To celebrate the launch of services, the Canadian airport greeted its newest carrier with an elegant Eiffel Tower-inspired cake and a ceremonial water arch salute. Direct competition on the 5,523-kilometre route comes from Corsair which operates a daily A340-300 service when referencing OAG schedules. 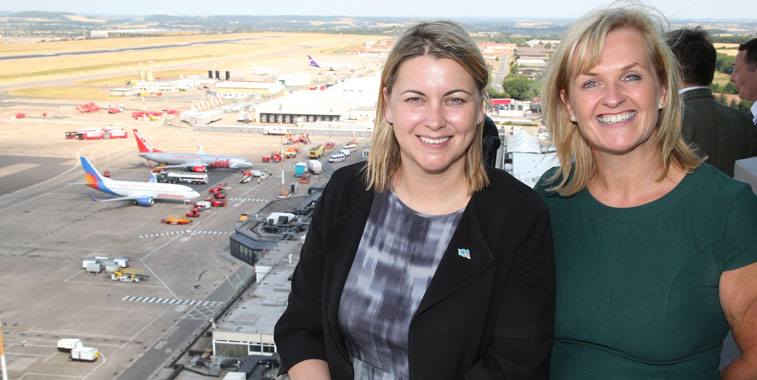 East Midlands Airport welcomed UK Aviation Minister Baroness Sugg on 5 July, with the minister pictured here at the top of the airport’s control tower with its MD, Karen Smart. Sugg visited the airport to understand more about its potential and to meet business leaders to discuss how EMA could better serve them with possible new international connections. East Midlands Airport is reporting a record year for cargo operations. The airport facilitates trade with 200 countries worldwide, with almost £10bn worth of goods to and from nations outside the EU and over 360,000 tonnes of cargo a year to EU and non-EU countries. “These figures show that East Midlands Airport’s cargo performance continues to go from strength-to-strength and plays a hugely important role in boosting regional growth and investment. Our regional airports support the backbone of our economy – providing skilled local jobs and business export opportunities which open the UK up to the world,” added Sugg. East Midlands Airport is the UK’s busiest for dedicated air cargo traffic. It is second only to Heathrow in terms of the total tonnage of cargo that passes through it annually. 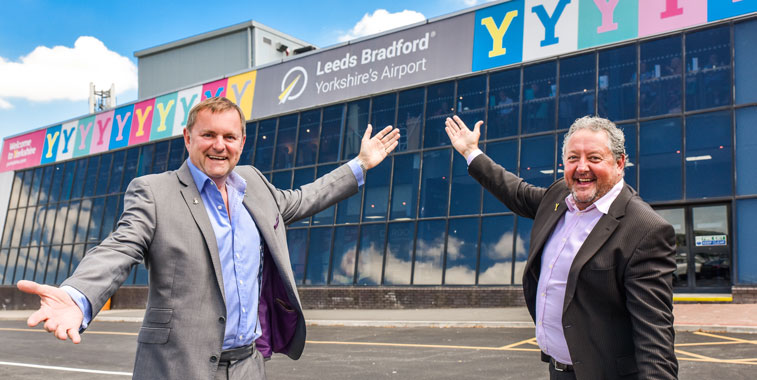 Leeds Bradford Airport in the UK was delighted to announce the completion of the first phase of its redevelopment on 9 July. Yorkshire’s largest airport, recently re-branded as ‘Leeds Bradford: Yorkshire’s Airport’, has undergone a massive airside redevelopment, with improvements also made to the terminal front. Designed to offer more choice for customers with a modern and vibrant feel, a multi-million pound development has seen the entire departure lounge transformed with additional seating plus a range of new shops, cafes, restaurants, bar areas and airport lounges. Pictured showing off the new-look terminal front are Sir Gary Verity, CEO of Welcome to Yorkshire and David laws, CEO, Leeds Bradford Airport. 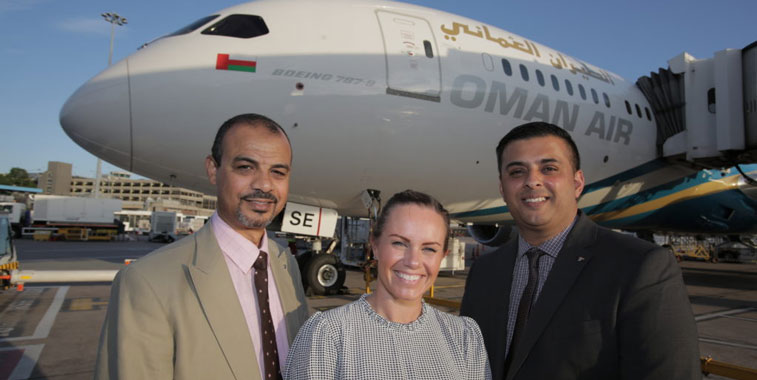 Oman Air introduced 787 services on its route to Manchester on 1 July, with the carrier having begun daily flights to the UK city from Muscat on 1 May 2018 using its A330-200s. OAG schedules indicate that the airline will use a mixture of its 787-8 and 787-9s on the 5,982-kilometre sector. Pictured with the first 787 service in Manchester are: Feysal Nagi, District Sales Manager, Oman Air; Nicola McMullen, Aviation Development Manager, Manchester Airport; and Kelpesh Patel, Interim Country Manager UK & Ireland, Oman Air.  Julian Carr, Aviation Director for Manchester Airport, said of the airline’s achievement: “It’s fantastic to see Oman Air celebrating its one-year anniversary at the airport. The carrier’s flights to Muscat, with connections beyond to Africa, Asia and India have proved hugely popular with the 22 million people in our catchment area. We look forward to working with them to build on a successful first year.” 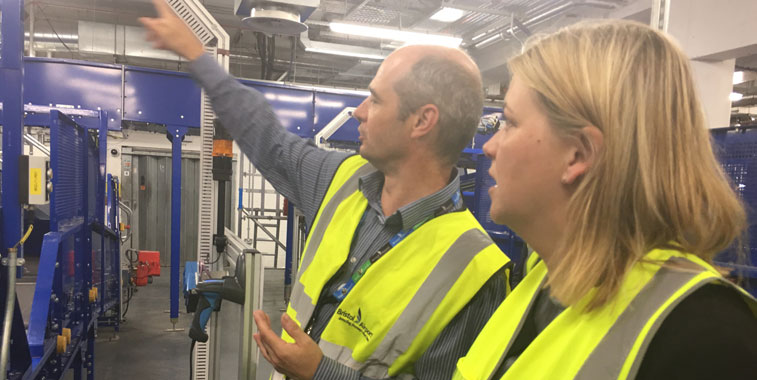 UK Aviation Minister Baroness Sugg also paid a visit to Bristol Airport this week to view a newly-installed hold baggage screening system – one of the first in the UK to meet the latest Department for Transport standards which come into force this September. Showing her around the new equipment is Fraser Dury, Head of Engineering, Bristol Airport. On her first official visit to Bristol Airport, Baroness Sugg was also briefed on plans to increase capacity to 12 million passengers per annum in order meet demand for air travel to and from the South West of England and South Wales. “The security and safety of our passengers is our top priority, and I was impressed to see Bristol’s investment in new technology to achieve this. Through our aviation strategy we will continue to look for new opportunities to protect passengers and airport workers as part of taking a fresh look at aviation sector up to 2050. We will support regional airports like Bristol, which play an important role in boosting the local economy and providing vital connections,” commented Sugg during her visit. 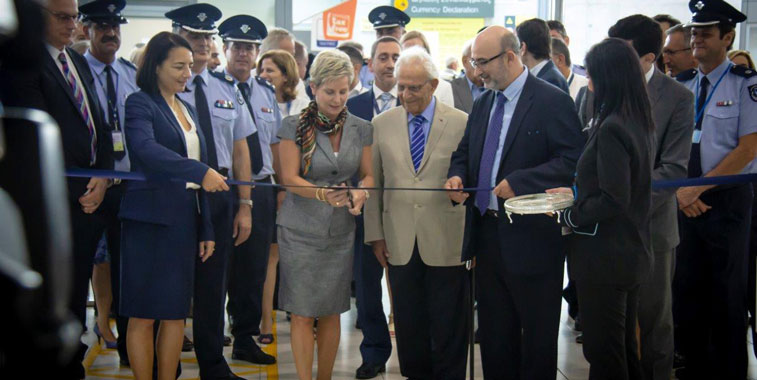 Vasiliki Anastasiadou, Cyprus Minister of Transport, Communications and Works, officially cut the ribbon to open BorderXpress interactive kiosks at Larnaca and Paphos airports. Through this high-level technology, each departing or arriving passenger in Cyprus will be in position to independently scan his or her identity card or passport as an intermediate step of the passport control procedure. Craig Richmond, President and CEO of the Vancouver Airport Authority, the company helping to innovate the technology with is produced by in-house company Innovative Travel Solutions said: “As the demand for air travel continues to increase, airports around the world must embrace and implement innovative technologies to solve critical passenger processing challenges. BorderXpress kiosks will increase efficiencies and improve the overall passenger experience at Larnaca and Paphos airports while enhancing safety and security levels within the EU.”