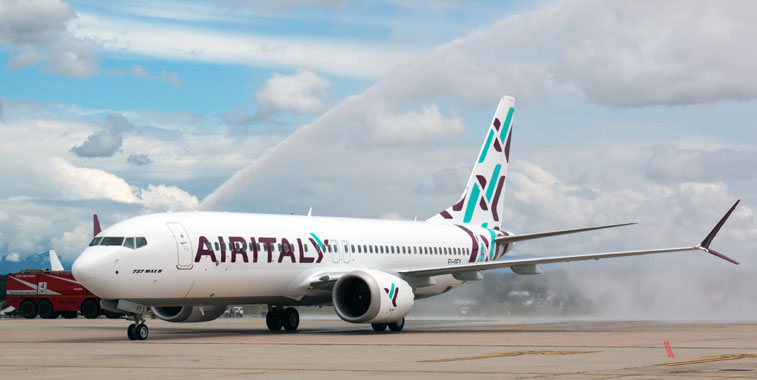 Air Italy became the newest operator of the 737 MAX 8 in May, with its first of the type seen here on arrival at its new home of Milan Malpensa, with the Italian hub greeting the aircraft with a water arch salute. “The touchdown of Air Italy’s first 737 MAX in new livery at Malpensa marks the beginning of a new travel experience for the people of Italy. Not only are we pleased to be part of this memorable moment, but we are delighted to be supporting it by leasing Air Italy with five A330-200s this year from the Qatar Airways fleet,” commented Akbar Al Baker, Group CEO, Qatar Airways.

Airbus and Boeing combined handed over 119 aircraft in May, up 2.6% (three units) from the 116 that the duo managed to achieve in the same month of 2017. The result is also an improvement compared to the companies’ joint results for April, when the two saw productivity fall 3.1% versus April last year. Of all deliveries in May, 74% were narrow-body variants, with the remaining 26% wide-body.  It should also be noted that April’s deliveries reveal that 31% of Airbus’ deliveries went to LCCs, while of Boeing’s 68 unit handovers, 22% were destined for a low-cost operator, giving an average for all deliveries in May of 26%.

Between the two companies, Boeing, for the fourth time in 2018, was the leading manufacturer when it came to aircraft handovers. The North American giant distributed 68 units in May, with Airbus only managing 51, equal to the European’s delivery total for April too. The result means that Boeing has edged further ahead in the 2018 delivery race, with it now holding a 73-unit lead over Airbus for the first five months of this year. Overall 519 units were delivered during the first five months of 2018, equal to what the two managed to achieve during the same period of 2017. 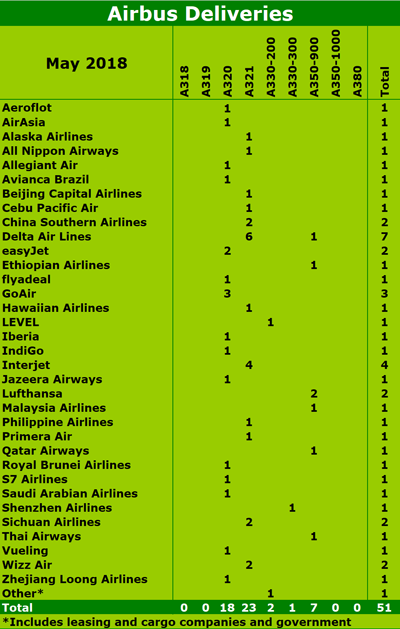 During May, Airbus handed over 51 aircraft, matching its total for the month previous, however the result was nine units lower than the 60 aircraft it managed to deliver during the same month of 2017. During the fifth month of 2018, Airbus distributed 41 single-aisle and 10 wide-body aircraft. This compares to 46 narrow-body and 14 wide-body deliveries in May 2017.

Overall Airbus delivered aircraft to 34 airline customers in May 2018. It should be noted that 14 of the carriers that received Airbus aircraft in May are Asia based, nine European based, six Americas based, four Middle East based and one, namely Ethiopian Airlines, Africa based.

The most popular aircraft type to be delivered in April was the A321 (23 units), followed by the A320 (18). The largest recipient of the A321 was Delta Air Lines which collected six of the type in May. The second biggest carrier to pick-up the A321 was Interjet, with the Mexican airline receiving four. The premier carrier of the A320 was Indian operator GoAir which collected three, while easyJet was the second largest airline, with Europe’s second biggest LCC receiving two of the type.

Looking at the wide-body market, Airbus handed over 10 aircraft, five less than it managed in April.  The A350-900 was the premier model for the world’s airlines, with seven being handed over to six airlines, a result of Lufthansa collecting two of the type in May. Along with the A350-900, two A330-200s were handed over to customers, including one destined for LEVEL (operated by OpenSkies), which recently put the aircraft into use at its new Paris Orly base. One A330-300 was also delivered in May, with it heading to Shenzhen Airlines in China, a carrier which has confirmed that it will begin long-haul operations on 30 October from its home base of Shenzhen to London Heathrow. 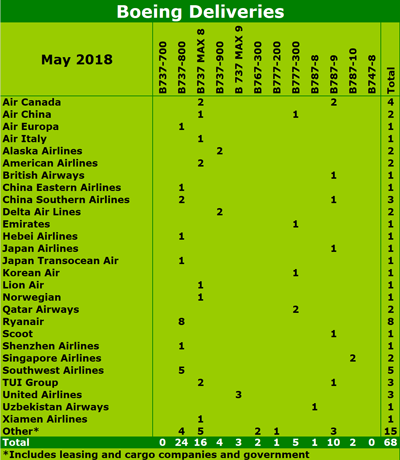 Boeing distributed a total of 68 aircraft in May, 12 more than it managed to during the same month of 2017, 24 more units than its April result. Boeing’s unit deliveries in May were made-up of 47 narrow-body and 21 wide-body variants. This compares to a 36/20 split in May 2017.

Like Airbus, Boeing’s customers in May came from multiple geographic locations around the world, with 13 being Asia based, six Americas based, six European based, and two Middle East based, with the rest of the unit deliveries going to either cargo or private users. Therefore although Airbus managed to deliver less units than Boeing, it managed to distribute to 34 carriers, versus Boeing which only handed units over to 27 clients.

The most popular Boeing aircraft type to be delivered in May was the 737-800, with 24 being handed out to customers. Ryanair was the leading customer of the -800 series once again, with it collecting eight in May, with this coming off the back of it receiving five in April and seven in March, meaning the Irish LCC has collected 20 new aircraft between 1 March and 31 May. The 737 MAX 8 was also a highlight, with Boeing noting 16 hand overs during the fifth month of 2018, with one of these being the first of the type to be delivered to Air Italy.

With regards to Boeing’s wide-body production, the most memorable delivery for May 2018 was Singapore Airlines receiving its third and fourth 787-10. To date it is still the only airline operating the stretched version of the type. Along with the 787-10, a further 10 787-9s were also handed over to customers in May, along with one 787-8 which headed for Uzbekistan Airways. Along with these deliveries, five 777-300s, one 777-200 and two 767-300s were also delivered to clientele around the world. 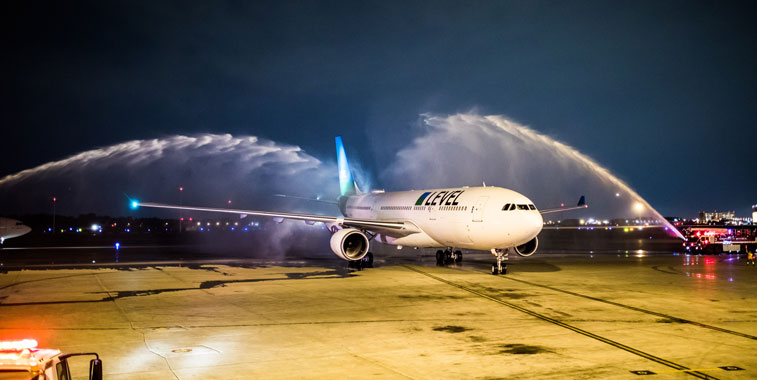 Airbus delivered an A330-200 to LEVEL in May, with this being the airline’s first aircraft to be operated by OpenSkies rather than Iberia. The airline used the aircraft to establish its Paris Orly base, with the carrier’s first flight to Montreal seen here being greeted by a water arch salute. Overall Airbus delivered 10 wide-body aircraft in May.