FIFA World Cup Final special, a review of the France-Croatia market; seats grow 154% since 2010; England and Belgium still in it 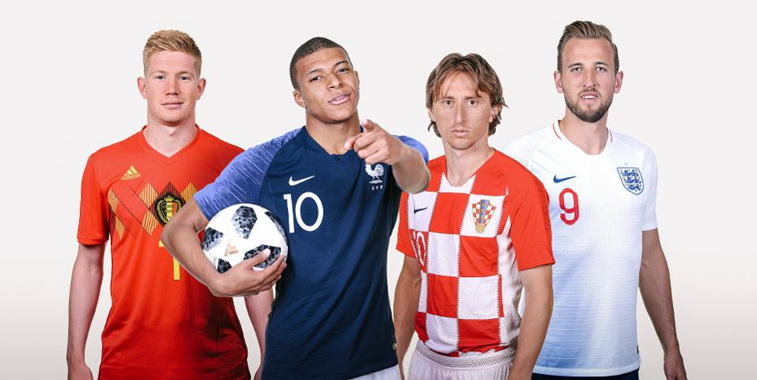 While this year’s 2018 FIFA World Cup Final is going to be fought out between France and Croatia, when it comes to the aviation world the third and fourth teams of Belgium and England are still in contention, with the operations of easyJet and TUI Airlines Belgium looking stronger this year that Air France and Croatia Airlines. easyJet will grow its seat capacity by 4.6% this year, with TUI Airlines Belgium forecasting a 21% increase in seats. Croatia Airlines will reduce its operation by 6.2%, while Air France and Transavia France combined will offer 5.8% less seats.

The moment we have all been waiting for is about to arrive, the show down between the world’s 11th and 75th largest aviation markets, and of course the World Cup Final between France and Croatia. Having done a review of the World Cup final eight teams, anna.aero has decided to take a closer look into the market between the two countries which will fight it out for the trophy. Of the final eight nations that were left in at this point last week, there were only 18 pairings which saw direct flights. Of those 18, the market between France and Croatia was the 13th largest, sitting between England-Brazil (12th; 660,500 two-way seats) and Russia-Sweden (14th; 467,400). With airlines offering 656,000 two-way seats between France and Croatia this year, anna.aero has taken a closer look at the development between these two countries.

Since 2010, when just under 258,000 seats were offered between France and Croatia, the lowest on record for the time analysed, the market has grown by 154%, with a little over 656,000 being operated in 2018. Since last year, the market has grown by just 1.8%, the lowest positive growth on record, with the country pair taking a slight tumble between 2009 and 2010, a period towards the back-end of the 2007/08 financial downturn. The best year for growth was 2016, where capacity between the markets grew by 24%. 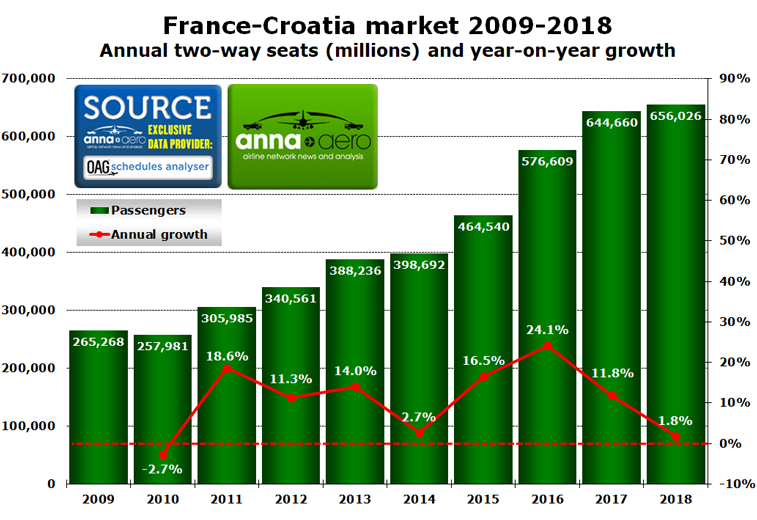 When taking a closer look into the data, it shows that the growth of recent years has been driven by LCCs, with this sector now accounting for 57% of seats between the two markets in 2018, a market share which has risen from only 30% in 2015. This has been achieved by LCC seats growing by 168% between 2015 and this year. Hopefully the World Cup Final between these nations will not be a low-cost affair, with high levels of end-to-end action anticipated.

England and Belgium not giving up

While England and Belgium will take to the pitch on Saturday to play it out for third place, in terms of aviation they are still big players between France and Croatia, with the two airlines of each nation highlighted in light green in the table below. easyJet, the London Luton-headquartered operator, is the third largest player between France and Croatia, with it also increasing its seat capacity between the two nations by 4.6% this year versus 2017. This is a result of the airline growing capacity on its route between Paris CDG and Pula this summer to three times weekly from twice-weekly in S17. Not only is England left in the final, but Belgium too has a presence. TUI Airlines Belgium is sixth largest operator between the two nations, operating six routes between France and Croatia this summer. This includes its support of regional French airports, including Deauville and Lille, with flights to Brac and Split. Along with England and Belgium, nations including Spain, Ireland and Germany are also part of the aviation final. 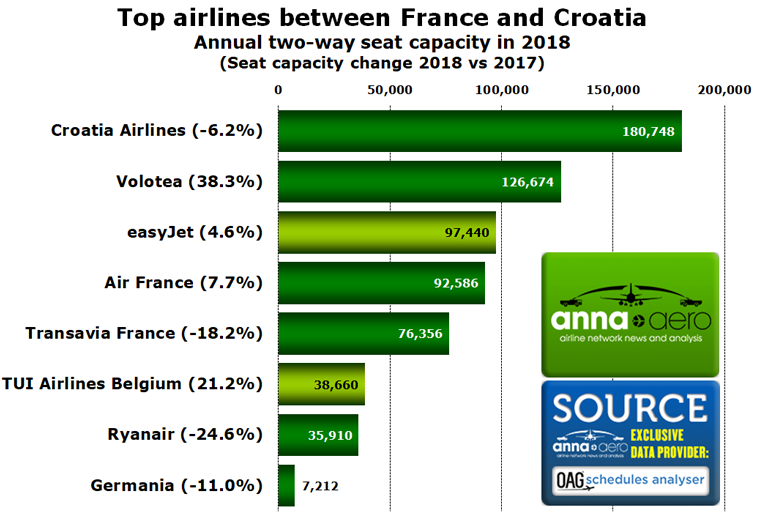 Interestingly, the biggest operator in the market is the national carrier of Croatia, with Croatia Airlines controlling 28% of all seats in the market this year, down from a market share of 30% in 2017. While Air France is only the fourth largest carrier between France and Croatia, it unlike Croatia Airlines, has grown seat capacity between the two nations, with its seat offering up 7.7%. However, Air France is somewhat let down by Transavia France, with it forecasting a 18% drop in seats this year. It means when the two French operators are combined, the seat offering is down 5.8%. Let’s hope that this result is not an omen of the performance that will be put in by the French team during the final in Moscow.

A fight between the capital captains

The leading route between France and Croatia is the capital airport connection of Paris CDG and Zagreb, with the airport pair accounting for 30% of all seats between the two countries in 2018. Unlike in Croatia, the French captain appears to have greater strengths when it comes to routes, with CDG supporting three services to Croatia this year, whereas Zagreb is only linked to CDG. With that, anna.aero thinks that French team captain Hugo Lloris will be better supported than Croatian team captain Luka Modrić at the final on Sunday. 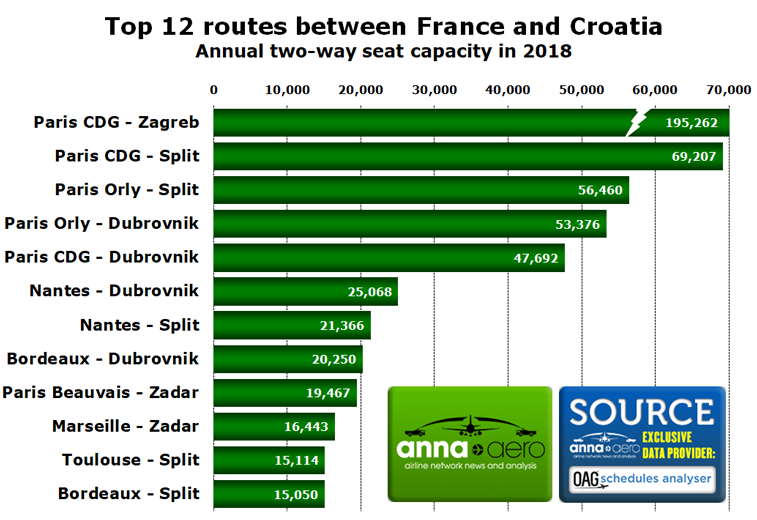 In total there are 24 routes operated between Croatia and France in 2018 on either a year-round or seasonal basis. Given that only six Croatian airports are playing versus France’s squad of 12, it appears that France certainly has the upper hand heading into the aviation final. Whatever happens, we are sure that the final will still be worth watching, even to the disappointment of anna.aero’s data elves who now know that football is not coming home…not this time anyway. So, when are Qatar Airways going to release 2022 seats? 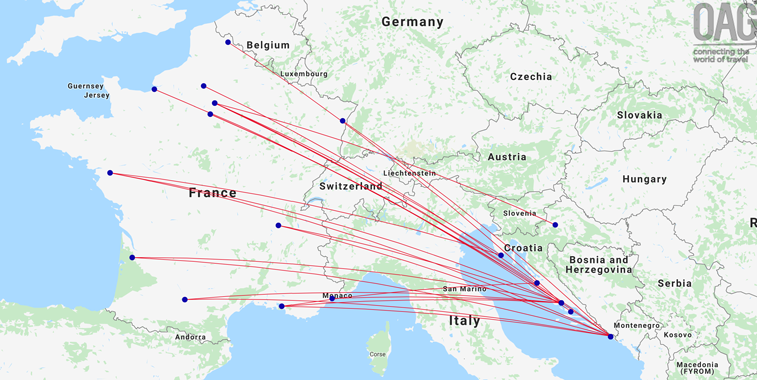 France and Croatia are preparing to fight it out for the World Cup title on Sunday, however from scheduled data it shows that England and Belgium are still not out of it when it comes to the aviation world. easyJet is presently the third largest operator between the two nations, while TUI Airlines Belgium is supporting regional French players wanting to escape for some Adriatic Sea sun. From the results of airlines based in Croatia and France, it appears to be a boring final when viewed in an aviation context. Let’s hope that a much more exciting final is played out in Moscow.