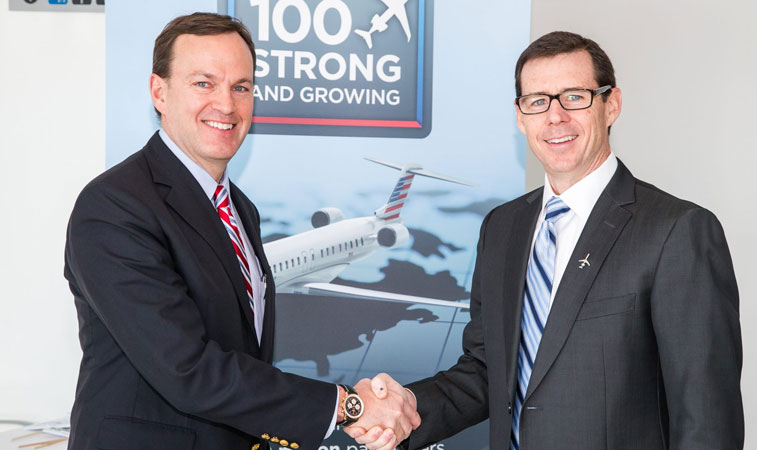 PSA Airlines took delivery of its 100th CRJ series aircraft on 12 February 2016. Seen shaking hands on the transaction of the aircraft to the airline are Fred Cromer, President of Bombardier Commercial Aircraft and Dion Flannery, President of PSA Airlines. Since then, the airline’s fleet has grown to 129 aircraft, with the airline expecting to grow the fleet to 150 units over the next few years. The carrier’s rapid fleet expansion has allowed its traffic to surge, growing from 5.57 million passengers in 2014 to just under 12.63 million last year, representing a 127% increase in traffic over the period.

PSA Airlines is a regional operator based in Dayton, Ohio, flying on behalf of American Airlines under the American Eagle brand. It currently operates from crew bases at Charlotte Douglas, Washington Reagan, Philadelphia, Dayton, Cincinnati, Knoxville and Norfolk. This summer the airline will operate on average just over 800 daily flights for American. With there being an average of 6,684 daily departures which carry American’s AA flight code (excluding code-shares), it means that just over one-in-eight American departures is on a PSA-operated service. This has increased from a ratio of 11-to-one in 2008, signifying that PSA’s operation are more vital to American’s business in 2018 than they were 10 years ago.

PSA transported just under 12.63 million passengers in 2017, up 8.7% versus 2016. Last year’s result is indeed impressive, however the carrier has seen passenger numbers surge in recent years. Traffic levels in 2014 were recorded at 5.57 million, with last year’s total some 127% greater than that of four years ago. The main uptick occurred in 2015, with traveller numbers climbing by over 64%. This rapid expansion was a result of American transferring 47 CRJ 700s from Envoy Air to PSA, allowing each airline to more efficiently focus its own operations on a single aircraft type – Embraer jets for Envoy and Bombardier jets for PSA. Along with this expansion, PSA also took hold of 30 CRJ 900s that were ordered by American, with between two-to-three units a month being delivered to the carrier between Q3 2014 and Q4 2015. To date, the carrier currently possesses 129 aircraft, made-up of 35 CRJ 200s; 40 CRJ 700s and 54 CRJ 900s. The airline has stated that it plans to operate 150 aircraft within the next few years. 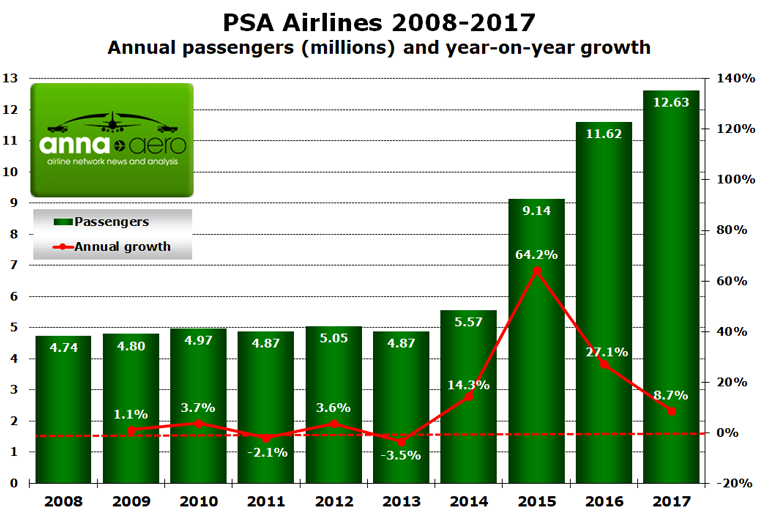 When referencing OAG schedules, in 2017 PSA operated 16.58 million seats. This means PSA had an average theoretical load factor last year of roughly 76%. This compares to an American Airlines Group average of 82% across its entire network according to its 2017 annual report, with the average for domestic services being just under 84%. In 2016, PSA flew just under 15.24 million seats, with the carrier also recording a 76% theoretical load factor that year. It means that even though the carrier flew 1.01 million more seats last year than it did in 2016, it was still able to match its load factor from the previous year. Back in 2008, PSA managed a less healthy average load factor of just under 69%.

Charlotte Douglas is by far PSA’s leading airport, accounting for 38% of the airline’s departing seat capacity in 2018, with 6.94 million one-way seats on offer from the North Carolina hub. With this forecast for 2018, it means that PSA will grow seat capacity from Charlotte Douglas by 7.3% this year. The airline’s second-largest hub – Washington Reagan – is forecast to grow by 1.1% in 2018. However, Philadelphia, the carrier’s third biggest airport, is scheduled to see seats grow by 98% in 2018. While PSA itself has not started any specific new airport pairs from the Pennsylvania airport, it has taken over a number of services, allowing American and its other affiliates to launch 13 new routes from the hub this year. In total PSA operates a network that stretches to 104 airports in 2018, an increase of two from 2017. 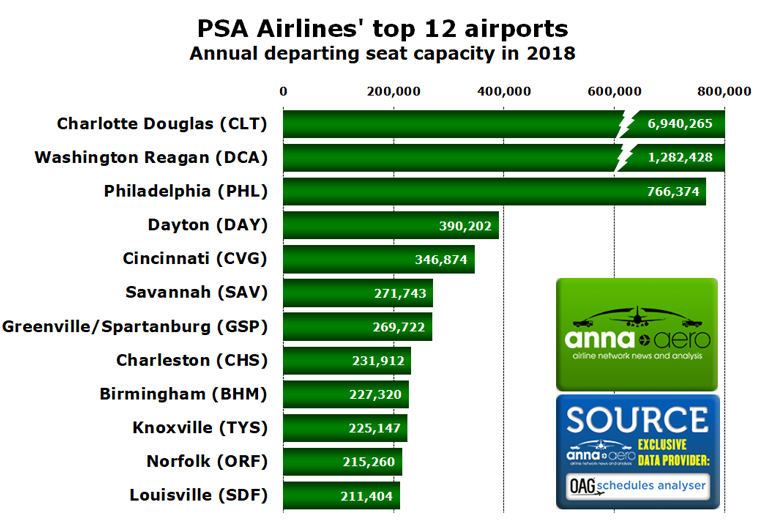 Currently PSA is the second largest airline at Charlotte Douglas after American’s mainline operation, with the latter offering 16.92 million seats on its own metal from its second-largest hub (based on annual seat capacity). In 2018, 27% of all seat sold by American from Charlotte Douglas will be operated by PSA. At Washington Reagan, PSA will operate 17% of all American seats in 2018, while from Philadelphia, its third-largest operation, PSA will fly 5.5% of American-branded seats.

When referencing OAG schedules, PSA will serve 201 routes which offer more than 1,000 scheduled seats in 2018. The largest connection is from the airline’s leading airport of Charlotte Douglas to its sixth biggest airport operation, Savannah. PSA will fly over 424,000 seats in 2018 on this airport pair, with it accounting for 2.3% of the carrier’s total capacity this year. Given Charlotte Douglas’ significance to PSA’s operation, it is no surprise to see that the airline’s top 12 routes all involve the North Carolina hub. The 12 services combined account for 22% of all seats that will be flown by the airline this year. 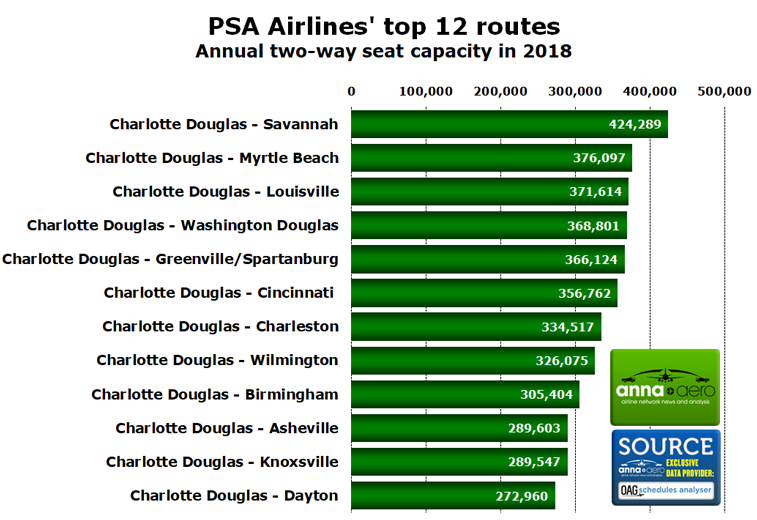 It is not until PSA’s 17th biggest route that you come across an airport pair which does not involve Charlotte Douglas, with that being a link between Philadelphia and Cincinnati. Of the 201 routes that PSA operates with over 1,000 seats this year, 96 of them involve Charlotte Douglas. That means 48% of all PSA routes involve its biggest base. Looking ahead to the rest of this year, one new route by American from Charlotte Douglas which will be operated by PSA is a connection to North Eleuthera in the Bahamas. It will offer a year-round weekly (Saturdays) service on the route using CRJ 700s. 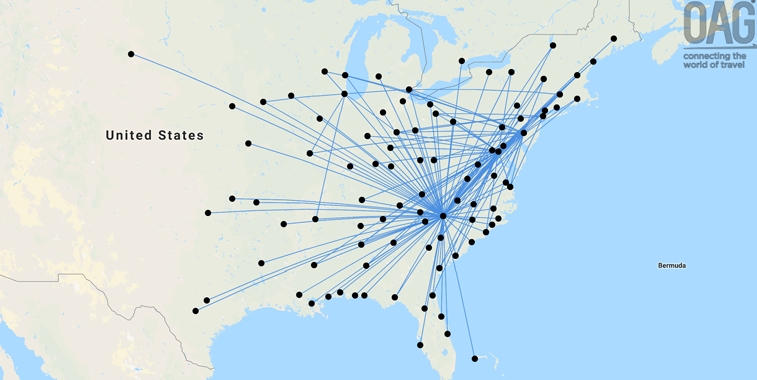 PSA Airlines’ route map shows how significant Charlotte Douglas is to its operation, with the North Carolina hub being home to 38% of its departing seat capacity in 2018. One airport which has seen a big boost from the airline this year is Philadelphia, with capacity from the airline at the Pennsylvania airport up by 98%. While PSA itself has not started any specific new airport pairs from the Philadelphia in 2018, it has taken over a number of services, allowing American and its other affiliates to launch 13 new routes from the hub this year. Overall 104 airports current grace PSA’s network.