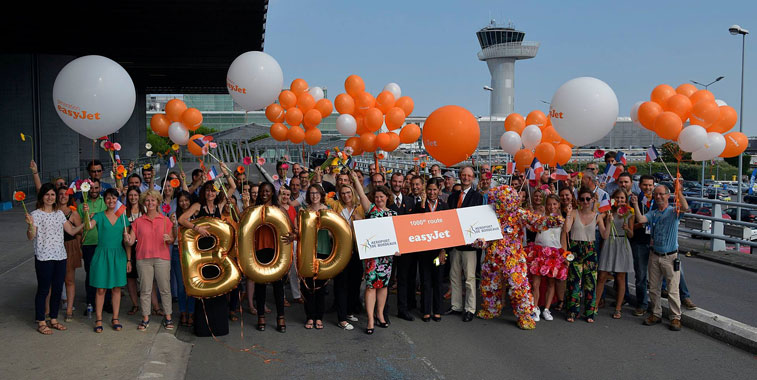 easyJet recently revealed that its new service from Manchester to Bordeaux will be its 1,000th route, with the French airport going all out for the celebration. However, while the airline has announced 24 new services for this winter, needless to say some cuts have been made to accommodate these new links. One of those to be cut is a route from the French airport, with the carrier’s four times weekly service to Brussels not bookable past 26 October.

While easyJet has just celebrated that it’s about to hit the 1,000-route mark this coming winter, but needless to say, while many routes have been added, some airport pairings have been cut from the schedules for W18/19, with anna.aero breaking down the details on some of those cuts. In total the airline will launch 24 routes from the start of W18/19 according to a press release it sent out last week, however anna.aero can confirm that 32 routes that flew last winter will not operate this coming season, although it would appear that of those routes, 25 are ‘real’ cuts. This is the current situation, but there is still time to edit schedules further before the season begins in three months time.

When comparing easyJet’s schedules for W18/19 versus W17/18, it would appear that the carrier has removed 32 routes from its schedules. However, it should be noted that some of these routes have been moved to other airports due to operational changes. For instance, of the top 12 route cuts for easyJet in terms of weekly frequency, four have been lost as a result of easyJet moving some operations from Berlin’s Schönefeld to Tegel. Another two of the top 12 routes have also been lost due to easyJet operating some services into Kavala Airport in Greece last winter while Thessaloniki saw reduced movements due to runway works. Some of these routes were discontinued at the end of the winter 17/18 season, while others are still operating but will cease operating in the coming months. 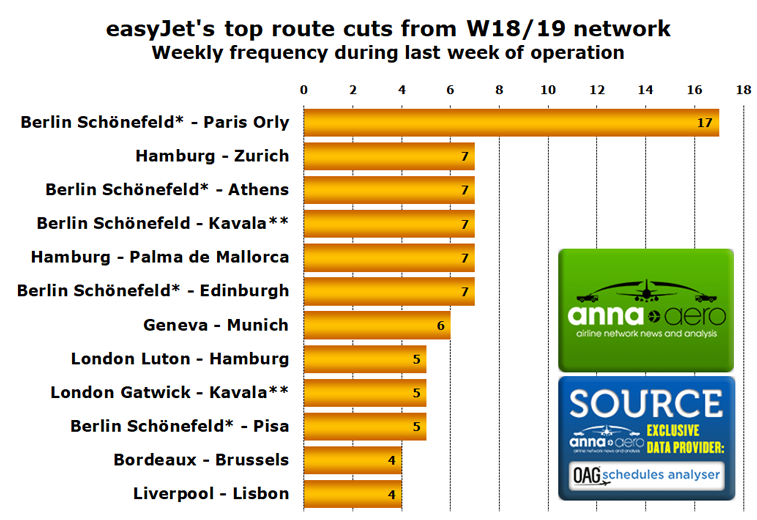 Source: OAG Schedules Analyser data checked against easyJet’s booking engine on 13 July 2018. *Moved to Berlin Tegel. **Operated from Kavala as a result of reduced operations at Thessaloniki due to runway works.

Taking these out of the equation, in total 25 true routes have been chopped from the network, with eight of those involving Hamburg, a direct result of the airline closing based operations at the German airport earlier this year. Along with the closure of some Hamburg services, easyJet is also ending flights from Bordeaux to Brussels and Liverpool to Lisbon based on current schedules and the airline’s booking engine.

Outside of the top 12 route cuttings, and excluding Hamburg cuts, switches from Schönefeld to Tegel, plus temporary Kavala services, the following have also been been cut from the airline’s schedules this winter:

Of these routes, five are from the UK to skiing destinations, with flights from Birmingham to Grenoble for example now being flown by Jet2.com this coming winter. easyJet also faced strong competition on some of these services, with Ryanair growing to up to four flights a day in early winter between Stansted and Sofia, a route it flew up to just three times daily last winter. These closures have also resulted in two airports leaving the airline’s network, with Kittilä and Lublin no longer being part of the route map as a result of closures from Bristol, Gatwick and Milan Malpensa. The Polish airport was only part of the carrier’s network for 12 months, having been introduced on 29 October 2017. It should be noted that some of the routes mentioned above that end in October could reappear for S19 if they have been converted from year-round to summer seasonal services.

Along with route closures, easyJet is also showing reduced capacity at 28 airports this coming winter. Given its base closure, it is no surprise to see that Hamburg leads the way in terms of seat capacity cuts. The second largest airport seeing a reduction in operations this winter is Schönefeld, again a result of easyJet expanding rapidly at Tegel, with the German capital’s leading airport, in terms of passenger figures, becoming easyJet’s fifth largest base this winter. As a result of this expansion, Berlin becomes only the second city after London to boast two airport’s in the LCC’s top 12 after London (Gatwick and Luton). It should be noted that the numbers in the graph below are still likely to change once easyJet has added its new services and capacity increases to online schedules. 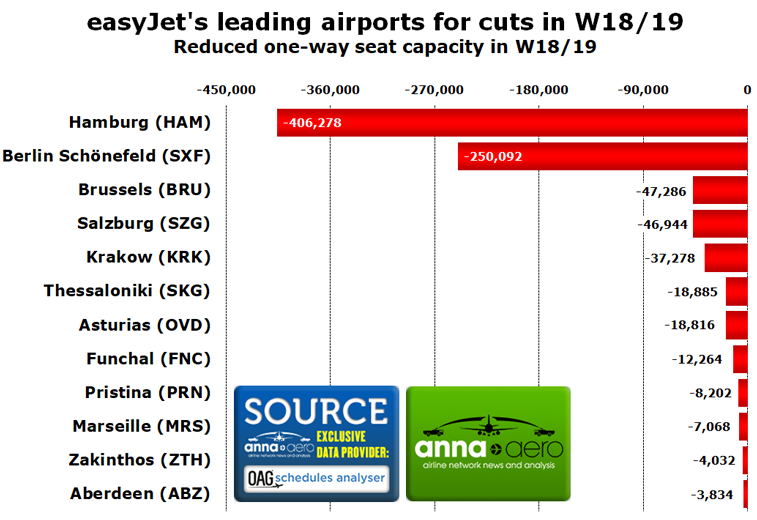 Besides the two leading airports for cuts, the next largest reduced operation is Brussels, with easyJet chopping over 47,000 one-way seats from the Belgian capital this winter. While the airline has not cut any services from Salzburg when referencing OAG schedules, easyJet will offer just under 47,000 fewer one-way seats from the Austrian city this winter. This comes as a result of the carrier reducing its Salzburg to Schönefeld service from three to twice-weekly during small sections of the winter season, plus the airline reducing its Hamburg service from five times weekly to twice-weekly this winter. Outside of the top 12 airports for seat capacity cuts, other mentions seeing a reduced operation include Gran Canaria (2,600 less one-way seats), Madrid (2,400), Verona (2,400), Pisa (1,500) and Larnaca (1,300). 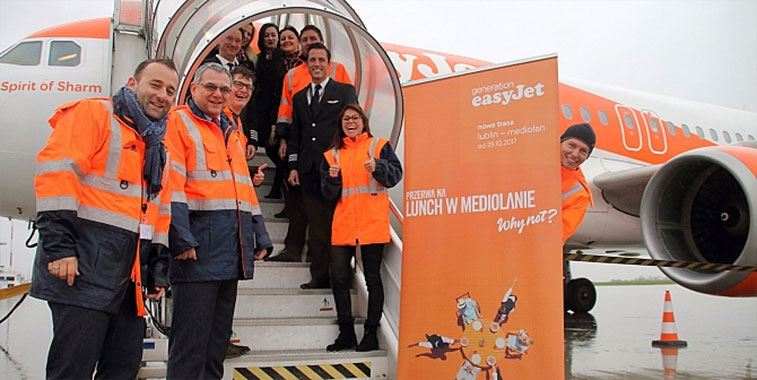 easyJet launched a twice-weekly service from Milan Malpensa to Lublin on 29 October 2017, however one-year later and the route looks to be discontinued for W18/19, having flown through S18. Although the route is no longer bookable past 26 October, it is still possible it could return in S19, as no summer flights have been released at this time.