Passengers on the up ‘Down Under’; Australian scheduled traffic grows 3.1% in 2017, international increase outpacing domestic demand 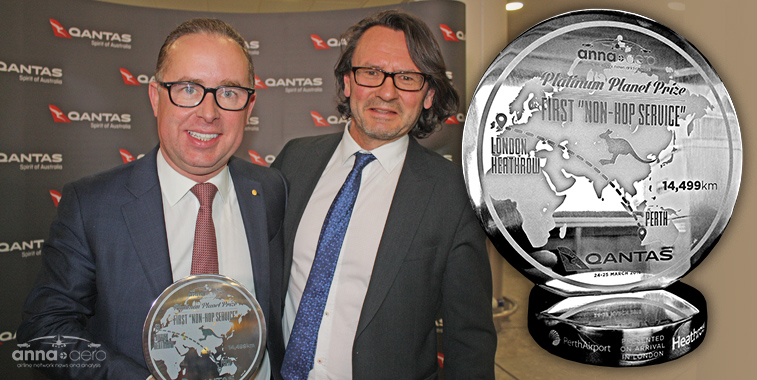 The UK became a new addition to Australia’s direct destination board in 2018 when Qantas launched its landmark 14,499-kilometre non-stop service from Perth to London Heathrow in March. anna.aero’s Publisher Paul Hogan was on hand at Heathrow to greet the inaugural flight and present Qantas CEO Alan Joyce with the prestigious Platinum Planet Prize to mark the airline’s first ‘Non-Hop Service’ from Australia.

Australia has enjoyed a steady increase in air traffic over the past 10 years, although this mature Asia Pacific market isn’t experiencing the same rapid growth rates as some of the developing economies in the region. Australian airports handled 73.93 million scheduled passengers in 2008 and this had increased to 99.59 million by 2017. This represents a growth rate of 35%. Over this period there were no annual declines in total traffic and the average annual growth rate was 3.4%. The biggest annual increase in passenger numbers occurred in 2010 with traffic up 7.9%, while the smallest growth rate was 1.2% in 2009, corresponding with the height of the global economic downturn. International and domestic passenger numbers both increased from 2008 to 2017, but domestic services account for the majority of the country’s traffic. In 2008, domestic links provided 68% of all passengers passing through Australian airports, and by 2017 they still accounted for 60% of the total market. 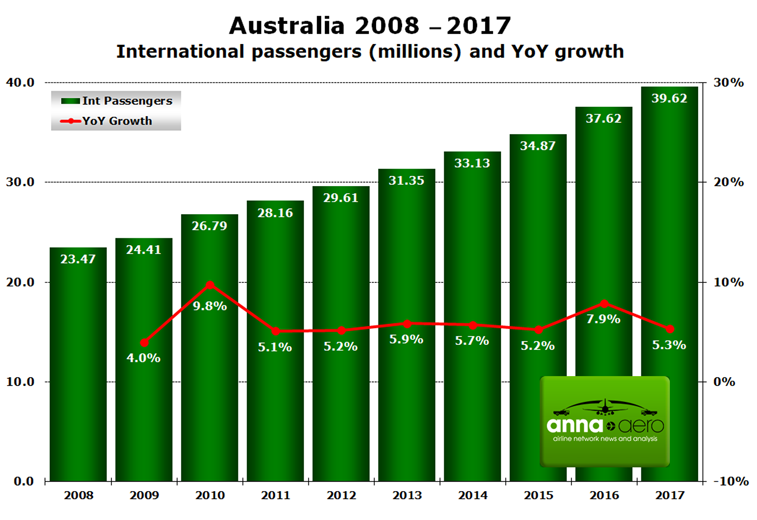 The biggest international routes from Australia during a typical peak week in S18, are the links from Melbourne and Sydney to Singapore, both of which have seen an increase in capacity compared to last summer. The Melbourne – Singapore sector will see 21,412 combined weekly seats on offer from five airlines across 62 departures. The Sydney – Singapore connection will see 21,266 seats provided by four carriers across 57 flights. Singapore is the biggest single international destination from Australia with nearly 75,000 combined weekly seats available to the city state from nine different airports. OAG schedules show that there will be links from Australia to 36 separate international country markets in peak S18. The biggest international country markets based on direct routes from Australia are New Zealand, Singapore, the UAE and China. The UK is a new entrant to the direct destination list after Qantas introduced its first non-stop flight to London Heathrow from Perth in March. 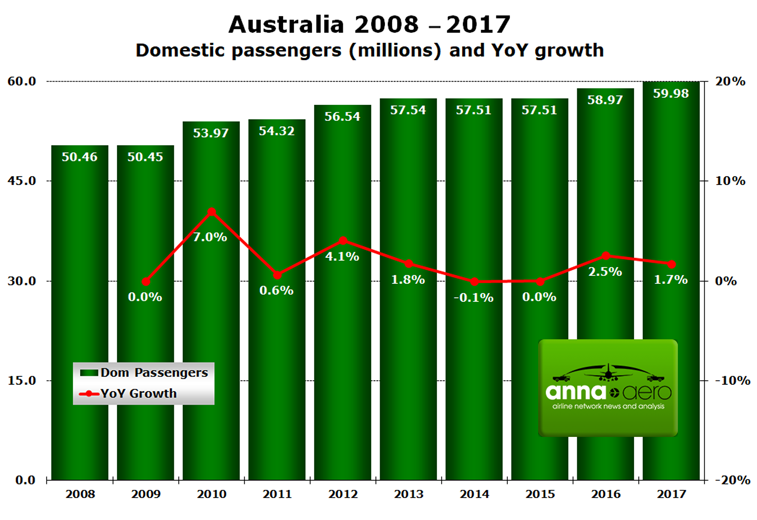 The largest domestic route in Australia is the connection between Sydney and Melbourne. Schedules show that this airport pair will be served by four carriers which will offer 95,000 combined one-way seats via 507 flights during the week commencing 31 July. The number of daily departures varies considerably from 47 to 87, depending on the day of week. All of the top 12 domestic routes in S18 will arrive or depart Melbourne or Sydney.

According to OAG data, 151 Australian airports will welcome at least one scheduled flight during the week commencing 31 July. Sydney and Melbourne are the busiest airports in the country by some distance. According to anna.aero’s Rest of the World Airport Traffic Trends database, Sydney saw 43.33 million passengers pass through its doors in 2017, while Melbourne handled 35.56 million. Between them these two hubs account for 48% of the country’s weekly departing seats in peak S18, with Sydney alone providing more than one-quarter of the total capacity. Sydney offers the most departing seats on both domestic and international services. 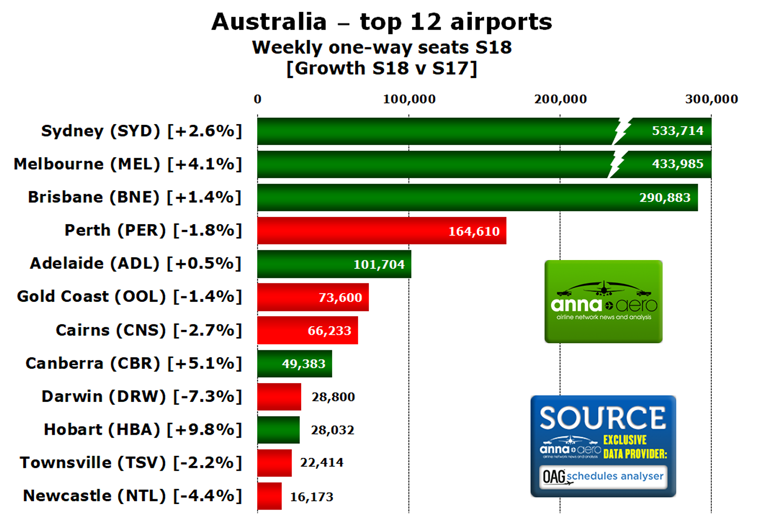 Half of the top 12 Australian airports have seen an increase in capacity (highlighted in green) for S18 compared to the equivalent period last year. The strongest growth among these facilities has been at Hobart with departing weekly seat numbers up 9.8% compared to S17. All four serving carriers – Jetstar Airways, Qantas, Tigerair Australia and Virgin Australia Airlines – will offer more weekly capacity from the airport this summer. Six of the top-ranked airports (highlighted in red) have experienced capacity cuts. In most cases these were marginal, with the largest decline coming at Darwin, where weekly seat numbers are down 7.3%.

Eight of the top 12 carriers serving Australia, based on departing weekly seats in S18, are full-service operators, three are LCCs and one is a regional carrier. Qantas is the largest airline in its home market. The nation’s flag carrier will provide 665,000 departing seats on 4,671 flights during the week commencing 31 July. It accounts for one-third of the country’s weekly departing seats in S18. Its busiest sectors are the domestic links between Sydney – Melbourne and Brisbane – Sydney. In total five of the top 12 airlines are based in Australia. The top-ranked carriers include all members of the Middle East Big three (MEB3), with Emirates taking the honours as the largest non-Australian operator in the market. 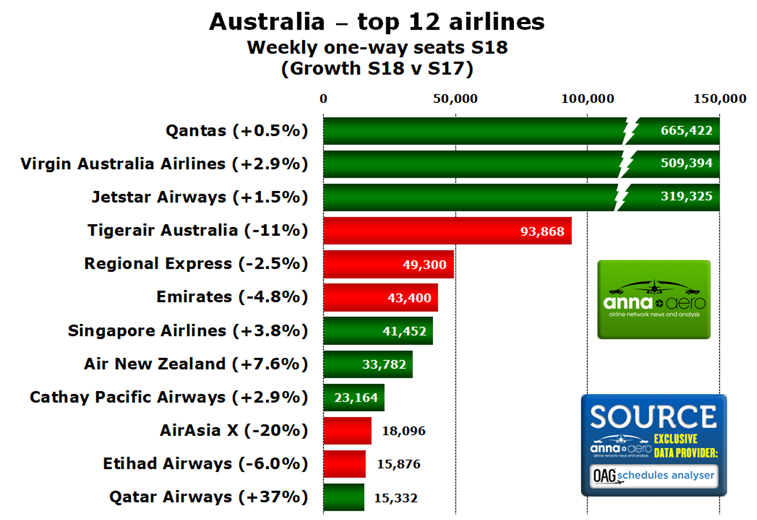 Seven of the top 12 carriers have seen an increase in capacity serving Australia this summer. The strongest growth rate has come from Qatar Airways (37%) which has added capacity on existing services from Doha and also introduced a new route to Canberra via Sydney. Five airlines (highlighted in red) have seen a decline in seat numbers with the biggest cuts coming from AirAsia X (20% down).

According to anna.aero’s New Routes Database a further eight new links are scheduled to commence from Australian airports before the end of 2018. Half of these will involve airlines starting new services to or from New Zealand. 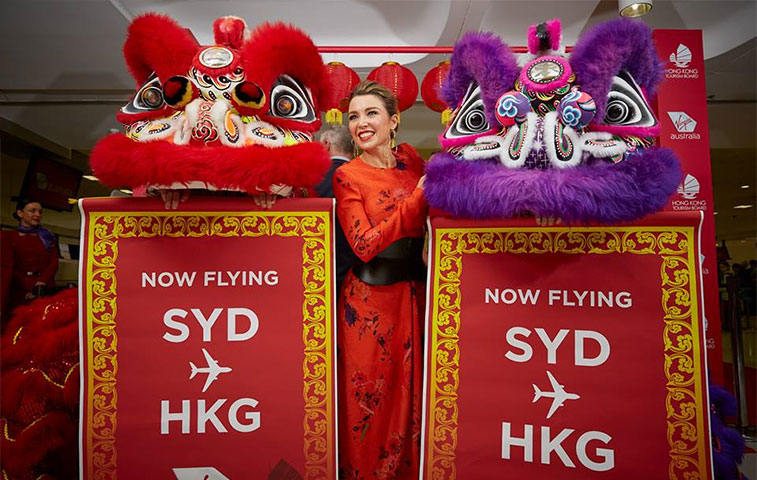 International passenger numbers grew by 69% at Australian airports from 2008 to 2017 compared to a 19% increase in domestic traffic. One of the latest international links to launch was this Virgin Australia Airlines service between Sydney and Hong Kong which started operating on 2 July. The largest international country market from Australia is its near neighbour, New Zealand.