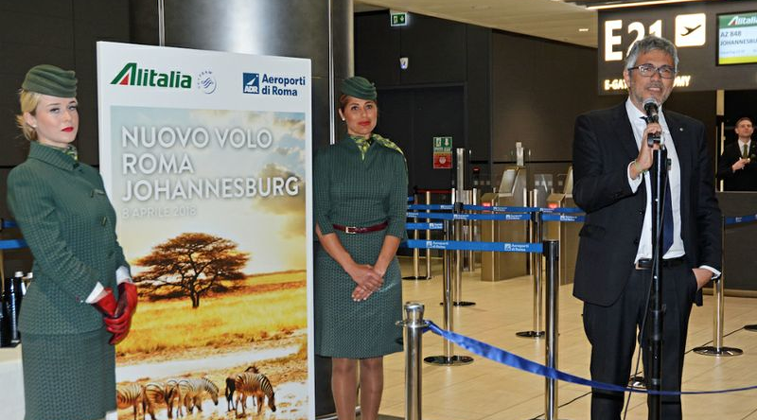 Alitalia resumed service to Johannesburg on 8 April, ending a 16-year absence for the SkyTeam member on the route from Rome Fiumicino, the carrier’s biggest base. The airport is more than twice the size of its next largest operation at Milan Linate and it is nearly 10 times bigger than its third and fourth largest airports at Cagliari and Catania.

Alitalia, Italy’s flag carrier but now second largest airline (based on OAG seat capacity for w/c 17 July) behind Ryanair, has its biggest base at Rome Fiumicino. Its operation at Italy’s busiest airport offers over 240,000 weekly one-way seats spread across its 80 destinations during S18. To put its size into context within the airline’s other operations, Fiumicino is more than twice the size of its next largest base at Milan Linate (90,132 weekly one-way seats) and it is nearly 10 times bigger than its third and fourth largest airports of Cagliari (29,632) and Catania (28,204). Comparing Alitalia’s operations at Fiumicino alongside some of Europe’s other legacy carrier bases, it is significantly smaller than Lufthansa’s Frankfurt (565,829 weekly one-way seats) and Munich (352,075) hubs, and over 200,000 weekly seats smaller than Air France’s largest base at Paris CDG. However it is twice as big as SAS’s largest gateway at Copenhagen, and it offers over 115,000 more weekly seats than LOT Polish Airlines’ home base at Warsaw Chopin.

Since 2010 and 2011, when the SkyTeam carrier switched from its dual-gateway strategy (shared with Milan Malpensa) to one that focused hub operations at Fiumicino, Alitalia’s capacity has showed no strong signs of a consistent growth trend. This is perhaps to be expected given the carrier’s past and present well-documented strife. However, despite these survival and ownership woes, between 2009 and this year, the Italian flag carrier is expected to grow its Fiumicino operation by 18% from 8.15 million one-way seats to a forecasted 11.36 million in 2018. In 2008, while Fiumicino was Alitalia’s largest base (10.25 million one-way seats), Malpensa was in second (2.78 million) position. The following year Malpensa had slipped to third, and last year the Milanese airport didn’t even feature in the carrier’s top 10 operations in terms of capacity, placing in 20th position. 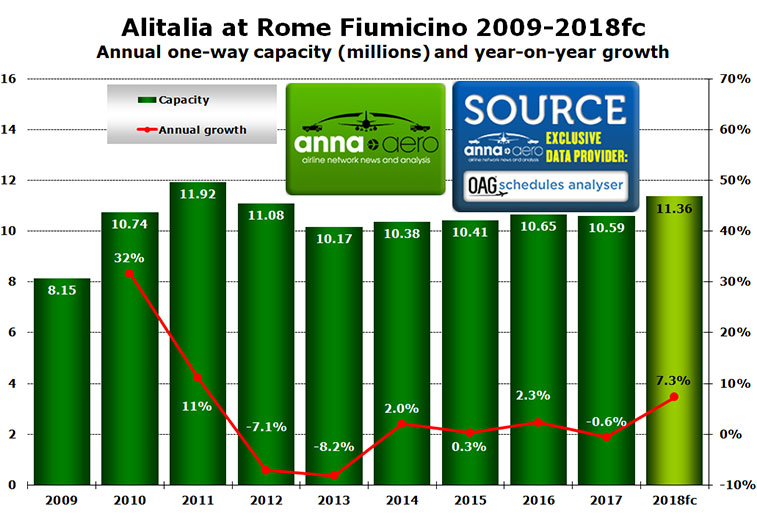 Interestingly, not one of the top 12 routes served by the flag carrier from Fiuimicino is going to be operated with the exact same number of weekly seats in this year’s sample week as they were in the same period in 2017. This indicates that despite the top 12 being the airline’s most important and long-standing routes, that it is still constantly adjusting its capacity to suit the fluctuating market demand. In July this year, Alitalia is offering 1,428 weekly departures from its biggest hub, with the top 12 routes representing 46% of this total. In the same month last year, the airline operated marginally more weekly flights (1,444), with the top 12 sectors offering seven weekly services more than the top 12 in 2018, although their combined share of the total number of rotations has stayed the same at 46%. 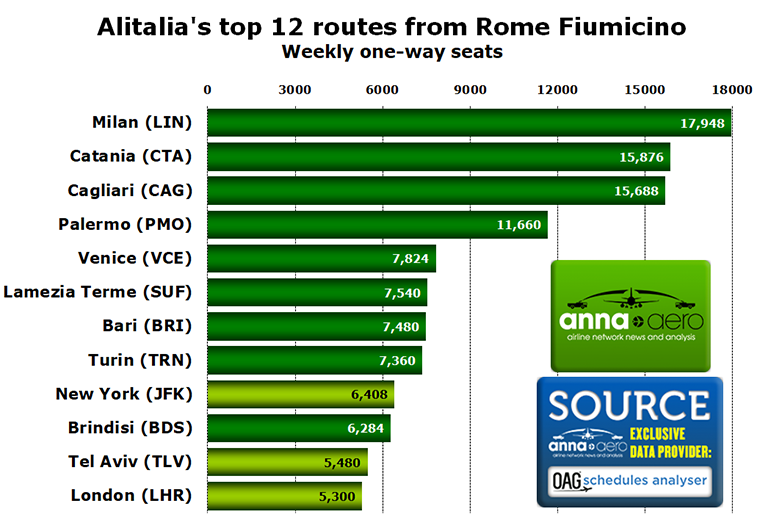 There are two newcomers to the top 12 routes served by Alitalia from its largest base, these being Tel Aviv (up to 11th from 26th position last year) and London Heathrow (up to 12th from 19th). This is as a result of both cities having witnessed an extra daily service (up to four times daily) versus the frequency from the same week last year. Unsurprisingly, the UK capital city was also the airline’s fastest growing route, posting a robust 40% annual capacity increase, ahead of Tel Aviv (35%) and New York JFK (19%). Lost from last year’s top 12 were Paris CDG and Alghero, with the latter being removed from the airline’s Fiumicino schedules altogether. Only three of the top 12 routes are not domestic (highlighted in light green) services. Capacity on the number one airport pair to Linate has been trimmed by 8.5%, partly in response to the carrier re-introducing flights to Malpensa from Fiumicino over the past 12 months.

Despite being by far and away the dominant market which Alitalia serves from Fiumicino, the domestic sector clearly remains integral to the SkyTeam carrier’s strategy, as the leading country market will observe 5.3% annual seat growth this year. The fastest growing nation however is Brazil, which has witnessed a 76% spike in its capacity from Fiumicino this summer, enabling it to climb from the being the airline’s 12th most important country market to ninth. In this market, Alitalia has increased its weekly frequency to Sao Paulo Guarulhos (up from daily to 11 times weekly) and Rio de Janeiro (up to daily from three times weekly) year-on-year. Other fast-growing country markets for the carrier include Russia (+50%), Israel (+35%) and the UK (+21%). 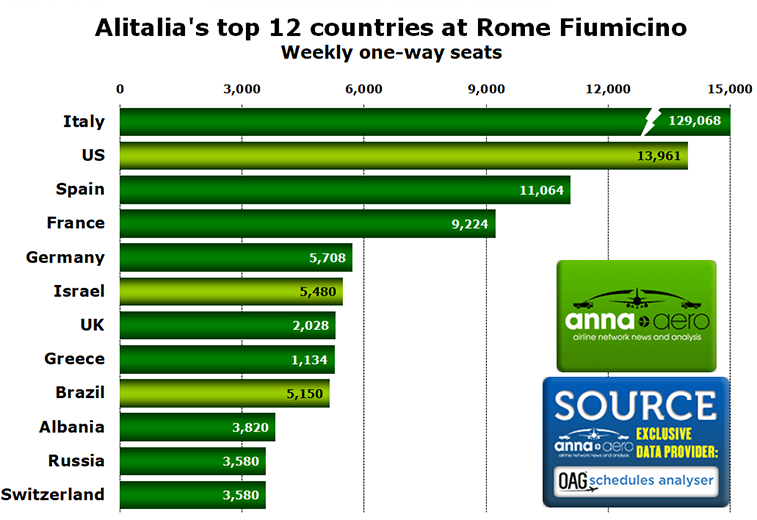 Its not all capacity growth for the airline at Fiumicino. Four country markets, namely France (-6.8%), Germany (-0.1%), Switzerland (-11%) and Netherlands (-35%), have all seen their respective weekly seats trimmed. As a result of the latter country’s decline, it has been replaced in the top 12 by Russia. There are just three nations inside the top 12 that are countries from outside of Europe (highlighted in light green).

Looking ahead, the airline has just one new route currently planned from its largest base, as it intends to add a three times weekly A330-200 service to Mauritius in October, according to anna.aero’s New Route Database. No doubt given Alitalia’s constant state of network flux, more change to its destination portfolio will be unveiled as time progresses, and anna.aero will keep you abreast of the route development fortunes of Europe’s most-ailing flag carrier. 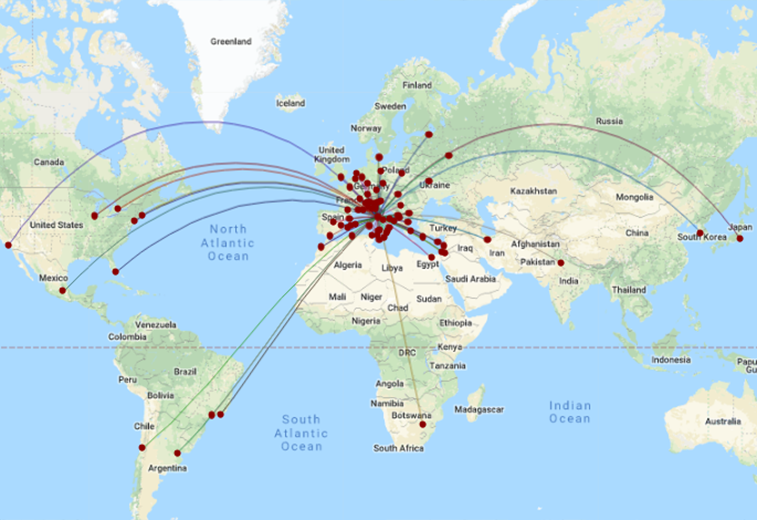 Despite all of its trials and tribulations, and the fact that it is no longer the largest carrier in its home market (that’s Ryanair), Alitalia still operates a true hub from Rome Fiumicino, its largest operation in terms of weekly capacity. That said, nearly 80% of its weekly seats are derived from Europe.