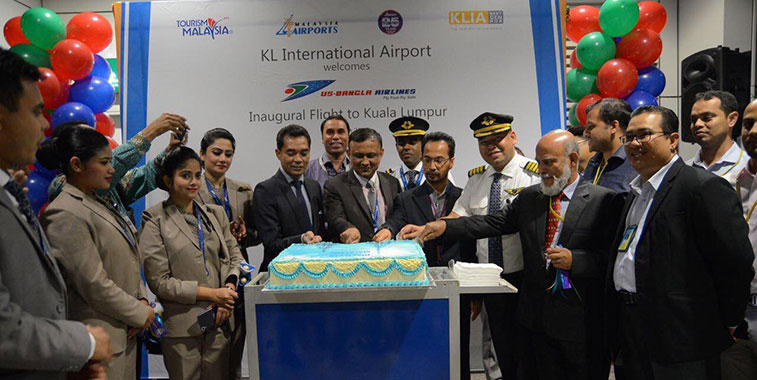 US-Bangla launch its fourth international route from Dhaka in March 2017. The carrier has expanded its base at the Bangladeshi capital rapidly, doubling its one-way outbound seat capacity between 2016 and 2017 according to OAG Schedules Analyser. Dhaka offered 6.3 million departing seats in 2017.

Dhaka is Bangladesh’s primary airport, with connections to seven domestic communities and 28 international destinations as of July 2018. It serves the country’s namesake capital city which is home to over seven million people, and despite Bangladesh being one of the smaller land masses in South Asia it has a population of over 163 million people. Over the past decade, economic growth has been remarkable – and since 2011 annual GDP growth has exceeded 6% according to the World Bank.

After stagnant demand during the global economic downturn and recovery phase of 2008-2013, where overall departing capacity only increased from 3.51 million seats to 3.8 million, since then Dhaka’s growth has been nothing short of remarkable. Biman Bangladesh Airlines, the nation’s flag carrier has seen capacity from its home nation grow from 0.73 million in 2013 to 1.49 million in 2017; an increase of 104% in five years. 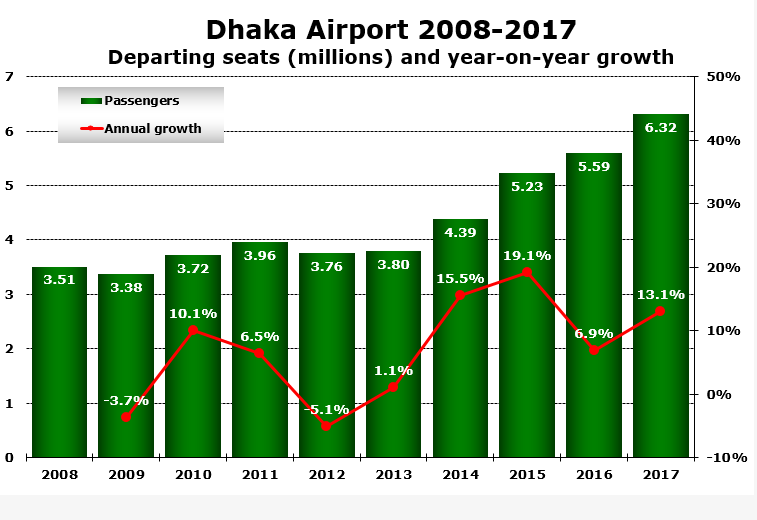 Growth in the Dhaka’s domestic network has been even more pronounced, with annual departing capacity increasing by 163% in five years; from 0.59 million in 2013 to 1.55 million in 2017 according to OAG schedules data. Being the capital city naturally brings an economic pull factor to the area, notwithstanding this fact, growth has been remarkable.

As discussed previously, Dhaka has experienced and is continuing to generate significant growth. 10 of the top 12 carriers at the airport have increased capacity when compared with 2016. Furthermore, there are no low-cost carriers yet to have made it into the top 12 airlines. Indeed, the largest true LCC to operate from Dhaka, AirAsia, comes in at #20, with the hybrid carrier flydubai ranking 14th. Despite effectively freezing capacity, with a 2.5% decrease, Biman Bangladesh still comfortably remains the largest carrier at the facility. However, regional carrier US-Bangla Airlines could soon pose a threat, having more than doubled capacity at Dhaka between 2016 and 2017 from 319,394 to 667,811, allowing it to climb from fourth largest carrier in 2016 to second in 2017 according to OAG schedules data. 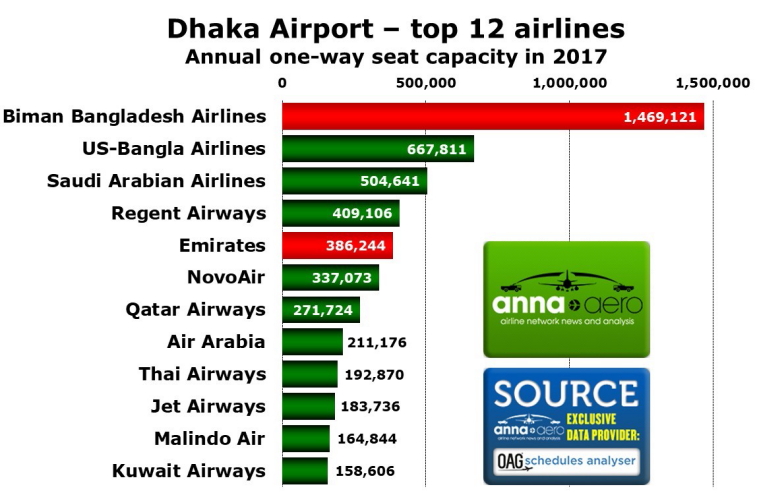 Emirates has displayed a similar trend to Biman Bangladesh, having frozen capacity when compared with 2016. Indeed, the MEB3 carrier has reduced capacity by just 242 seats from 2016 – less than the seat count of one of its 777s used on the route. A common theme is that both airlines have capped capacity in the past two years to shore up load factors and possibly boost yields. Indeed, according to FlightGlobal, Biman Bangladesh’s load factor has fallen from 75.4% in 2013 to 71% from 2014 onward, even as passenger numbers have risen. Similarly, Emirates saw load factor fall from 79.6% in 2014 to 75.1% in 2016. This has since recovered to 77.5% in 2017 as capacity was stabilised. As such, it is likely that these two capacity reductions at Dhaka are strictly carrier related, as growth at the airport remains strong.

11 out of the 12 largest routes at Dhaka have seen an increase in capacity between 2016 and 2017. Only the Dubai route has seen a decrease in seat numbers, from 570,452 in 2016 to 529,876 in 2017, likely due to the aforementioned Emirates restructuring. The domestic sector to Chittagong remains top, and no route further than the Middle East makes it onto the list, indicating that capacity – and by that token demand – is largely focused on the region rather than venturing into significant expansion into Europe or North America. Jeddah remains a strong market from Dhaka due to labour migration – discussed later in the piece – as well as for Hajj flights. 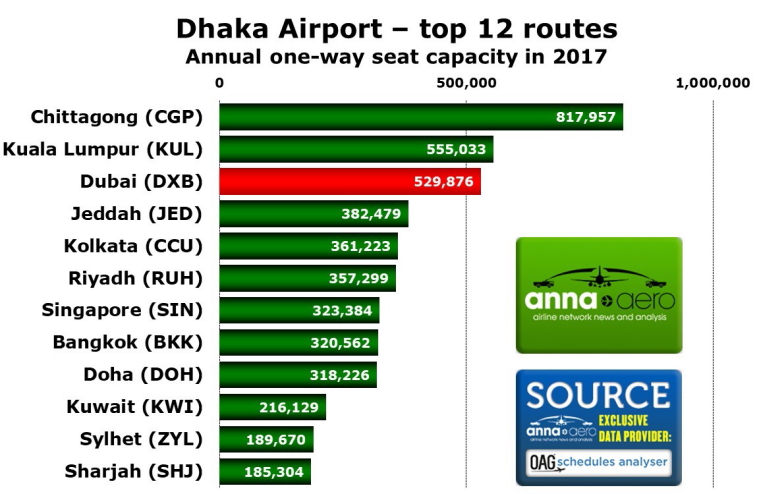 As discussed previously, domestic traffic out of Dhaka remains the airport’s largest country market. That seems set to continue in 2018, with 32% year-on-year growth in departing internal capacity above 2017 levels. Saudi Arabia saw capacity increase by a similar amount from 86,586 in July 2017 to 118,374 in July 2018, a 37% increase. 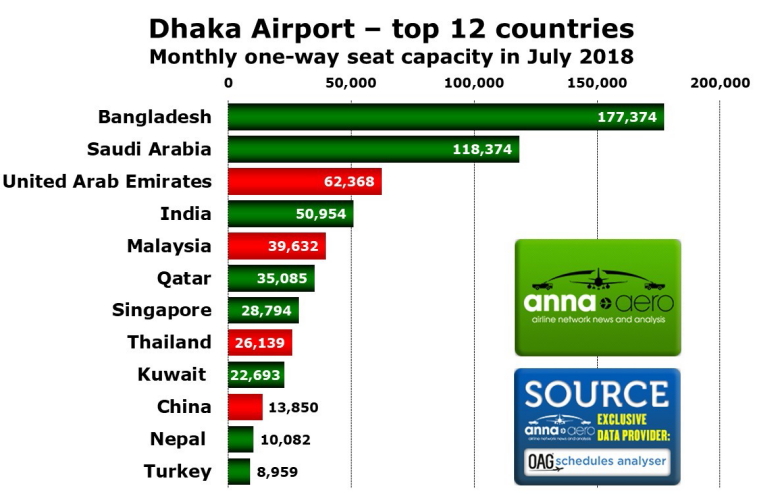 However, capacity increases to the business hubs in Asia have been much more nuanced. Growth to China, Malaysia, Singapore and Thailand has either stagnated or fallen. Singapore, the only one of the four to post an increase, saw an increase of just 704 seats in July 2018 (2.5%). The majority of growth from Dhaka based on this data, therefore, seems to be centred on destinations to its west – namely other South Asian countries like India or the Middle East. This corroborates with the top routes from Dhaka illustrated above, where six of the 12 are Middle Eastern destinations. A primary reason for this is likely socio-economic; Bangladeshi workers in the construction, medical and service sectors often migrate to rapidly expanding states like Saudi Arabia, Qatar and the UAE which have a significant labour shortages. In the case of the UAE, 85% of the population consists of foreign workers, of which 58% originate from South Asian countries including Bangladesh, India and Pakistan as outlined by the World Population Review.

As discussed in the analysis above, growth rates are impressive at Dhaka, with the airport showing strong recovery from the global economic downturn of 2008-09 and capacity having comfortably outstripped pre-recession levels. However, according to World Bank data, there are economic measures limiting the airport’s and country’s immediate potential. Inflation has remained high, exceeding 5.5% since 2008 and peaking at 10.7% in 2011. This combined with a GDP per capita of just $1,084 per year means that the propensity to fly – despite how willing the population is to fly – remains low; prices are increasing rapidly and people are unlikely to be able to afford to fly on an average wage at that level. However, inflation is steadily decreasing and average wages are rising, so as Dhaka and Bangladesh’s population becomes wealthier there will be greater demand for air travel.

Looking at schedules for this month, The vast majority of Dhaka Airport’s routes are concentrated within the South East Asian and Middle Eastern markets, with the exception of the two services to London Heathrow and Istanbul Ataturk.