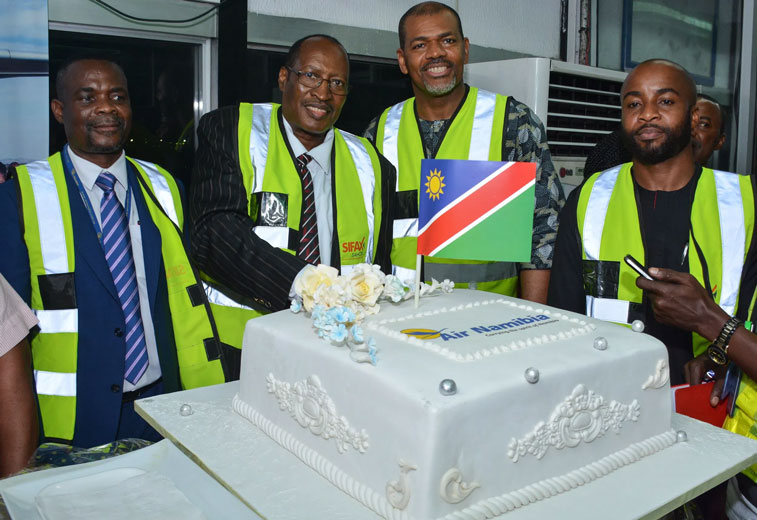 There were more than 4.50 million two-way seats available on flights serving Ghana in 2017. About 84% of the available capacity was operated on international links. On 29 June Air Namibia launched a triangular route between Windhoek, Lagos and Accra, with the airline having traffic rights between the Nigerian and Ghanaian cities.

In 2008 there were 2.74 million two-way seats available on flights serving Ghana. By 2017 this had increased by 65% to 4.53 million seats. This significant growth only tells part of the story. Despite the obvious positive trend over the past 10 years, a strong and continuous period of capacity increases came to an end in 2015, with significant cuts taking place that year. From 2008 to 2014 two-way seat numbers in Ghana increased by 80% to a high of 4.93 million, as the country enjoyed six consecutive years of annual capacity increases, including double-digit growth in 2010, 2011 and 2014. The strongest single year-on-year increase took place in 2010 when seat numbers rose by 20% versus 2009. The rapid expansion was cut short in 2015 as capacity fell by 9.8%. A rebound occurred in 2016 with seat numbers going up by 6.1% before capacity fell again last year by 4.0%. 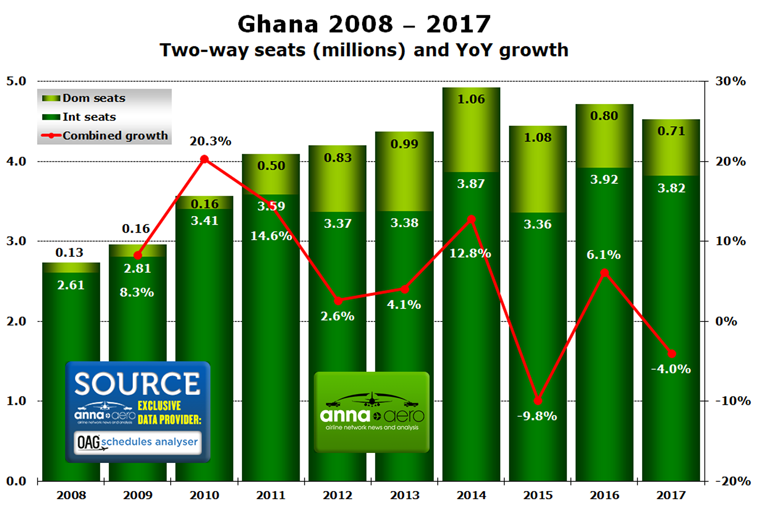 International capacity accounts for the majority of traffic serving Ghana, although domestic seat numbers have grown at a faster rate since 2008, albeit from a much lower base. In 2008 there were about 2.61 million two-way seats on services linking Ghana to international destinations. By 2017 this had increased to 3.82 million, representing a growth rate of 47%. In contrast, there were only 132,500 domestic seats in the market in 2008 and this had grown by 438% to 712,700 last year. During this period, domestic capacity peaked in 2014 and 2015 when there were more than one million seats available on internal services, before it declined again in 2016 and 2017. International capacity accounted for 95% of all seats serving Ghana in 2008, but this had fallen to 84% of the market by 2017. From 2008 to 2017 the proportion of the market represented by domestic seats peaked at 24% in 2015.

Home based carrier is capacity leader

Schedules show that 28 airlines will offer at least one flight from Ghana during the week commencing 31 July. The largest airline in the market last year was home-based Africa World Airlines, which offered nearly 590,000 two-way seats, more than two-thirds of which were flown on domestic links. Africa World Airlines accounted for 13% of the total seats serving its home country in 2017, meaning it was the leading provider of domestic capacity. In total half of the top 12 carriers in the Ghana market were African based operators last year. The largest non-African airline in 2017 was Emirates followed by Brussels Airlines. 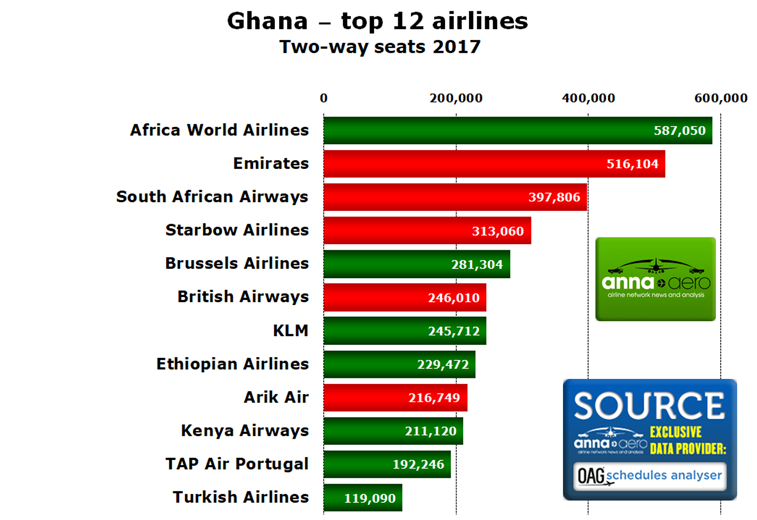 Six of the biggest airlines serving Ghana added capacity in the market in 2017. The largest increase came from Africa World Airlines, which grew its available seats by 60%. This was the airline’s fourth consecutive year of growth. A further six of the top 12 carriers (highlighted in red) cut capacity last year. The largest reductions came from Nigerian operator Arik Air (65% down) and Starbow Airlines (33% down). According to ch-aviation Starbow Airlines ceased operations last November but the former Accra-based carrier hopes to resume flights in the third quarter of 2018.

There are four airports in Ghana with commercial scheduled services in S18. These are Accra, Kumasi, Tamale and Takoradi. The only scheduled link from each of the latter three airports is a domestic connection to Accra. All of the international connectivity goes through the country’s main airport in Accra, which accounted for 86% of all departing scheduled seats from Ghana in 2017. The top 12 routes from Accra in S18 feature 10 international links and two domestic connections. The biggest route based on weekly capacity is Lagos, which will see seven carriers provide nearly 6,000 combined seats on 65 departures during the week commencing 31 July. The number of daily flights on this sector ranges from eight to 12. The largest domestic route is the connection to Kumasi. In total seven of the top 12 destinations from Accra are in Africa. The largest non-African links this summer are Amsterdam and Dubai based on data. 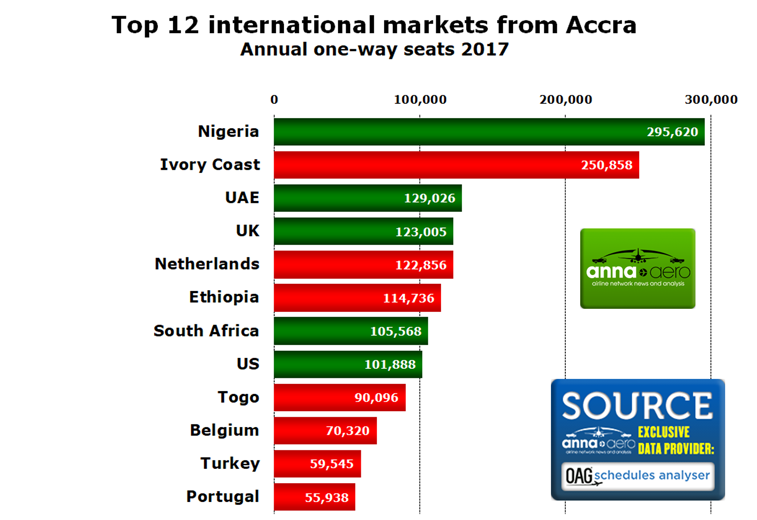 Four of the largest international country markets served from Accra in 2017 were in Africa including the two biggest, Nigeria and Ivory Coast. The largest non-African markets were the UAE and UK. Nigeria was the top-tanked market with the strongest growth last year with seat numbers up by 25%. Seven of the top 12 international markets (highlighted in red) witnessed a decline in capacity, with the biggest cuts coming on services to Belgium (17% down). Route and country market figures should be treated with caution since a number of carriers operate from Accra to their final destination via intermediate points. These carriers do not always have traffic rights between Ghana and the intermediate destination. 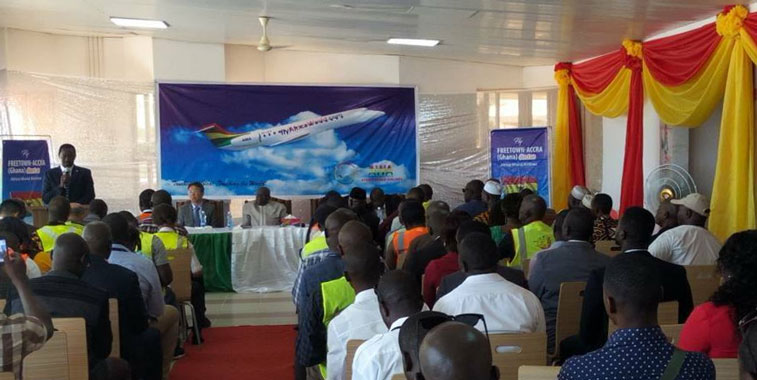 Accra-based Africa World Airlines is the largest operator in Ghana. In 2017 it accounted for 13% of the total capacity serving the country. The airline held a press conference in Freetown to mark the start of its services from Accra on 21 May. The carrier  operates three weekly flights on the 1,473-kilometre sector using its ERJ 145s.