LCC capacity in Europe set for half a billion seats in 2018; nine nations already at 50% market share; European share forecast for 50% in 2027 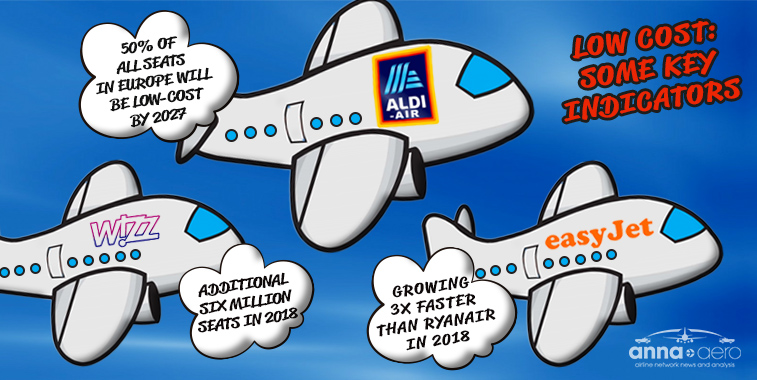 With low-cost seat capacity in Europe reaching over 36% of all seats in 2018, and achieving an average increase in market share of 1.4 percentage points per annum, the LCC sector will represent 50% of all seats by 2027. Highlights for 2018 include Wizz Air adding six million additional seats, while easyJet is growing three times quicker than Ryanair. The London Luton-based operator is showing just under 13% growth this year compared to Ryanair’s 4.2%.

Since the emergence of low-cost airlines over 40 years ago (Southwest Airlines started life in 1971), the market has certainly blossomed, with many carriers now following the model around the world. With many changes in the European low-cost market during the past year, including easyJet’s lease of 25 ex-airberlin aircraft, the development of Laudamotion and Ryanair’s involvement in the ex-NIKI carrier, anna.aero has decided to look into how LCC capacity has developed across Europe over the past 10 years, and which airlines are leading the charge. It should be noted that the airlines that have been analysed in this feature have been classified as a low-cost carrier by OAG.

Half a billion barrier broken down

In 2018, it is estimated that 501.83 million low-cost seats will be flown in Europe based on OAG schedules, up 7.4% versus 2017, with this year therefore becoming the first time the LCC market has past the half a billion barrier in terms of annual seat capacity. When looking back over the past decade of the low-cost market, the number of seats flown by LCCs in Europe has grown 124%, going from 224.29 million seats in 2009 to over half a billion this year. 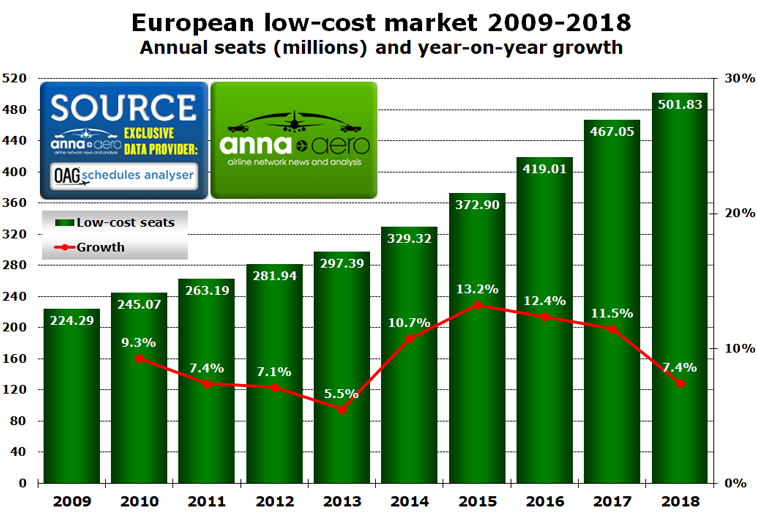 While the number of seats flown by LCCs in 2018 has increased by just under 35 million versus 2017, this year is the slowest for growth since 2013, a year when low-cost capacity increased by 5.5% versus 2012. Overall the European market has seen LCC capacity grow at an average rate of 9.4% per annum over the past decade. If this average is taken, then in 2019 over 540 million low-cost seats will be flown from European airports. while in 2020 this number could grow to just under 600 million seats. However, as the average growth rate has steadily fell at an average of 1.9 percentage points between 2015 and 2018, the increase could be limited to around 5.5% in 2019. In this case, anna.aero predicts that this would result in 529 million low-cost seats next year.

Based on OAG schedules, LCCs in 2018 will account for over 36% of the market, the highest share it has achieved. Since 2009, the market share of all seats in Europe flown by low-cost airlines has grown on average by 1.4 percentage points per annum. Using this average, anna.aero has forecast that the low-cost market should have a 50% stake of all seats by 2027. 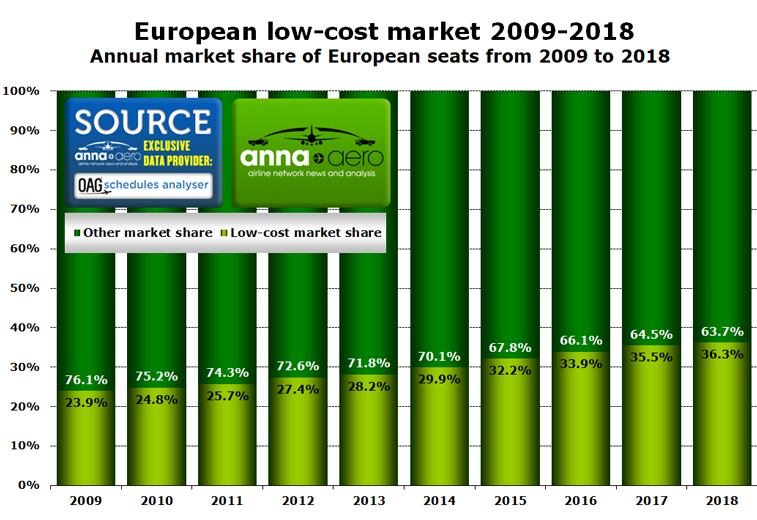 While LCCs only account for just over 36% of seats, the image is slightly different when focusing on just the intra-European sector. Taking this into account, then LCC market share grows to 41%, with this increasing from a 40% share in 2017. Ryanair and easyJet are still the two largest carriers in Europe, with Lufthansa and Turkish Airlines following in third and fourth place respectively.

easyJet next to hit 100 million seats

With Ryanair having already hit the 100 million seat capacity barrier, it would appear that easyJet will be the next to pass this milestone, with it expecting to fly over 98.4 million seats this year, up by 11.1 million seats when compared to 2017, a result of its expansion in Germany following airberlin capacity acquisitions. With this, easyJet is likely to pass the 100 million seat capacity barrier in 2019. It is also interesting to note that by the end of the year, the LCC will have grown three times faster than Ryanair, with the latter reporting a modest 4.2% increase in seat capacity this year. Overall the top five European LCCs account for 70% of all low-cost seats operating in 2018, the same market share they achieved in 2017. 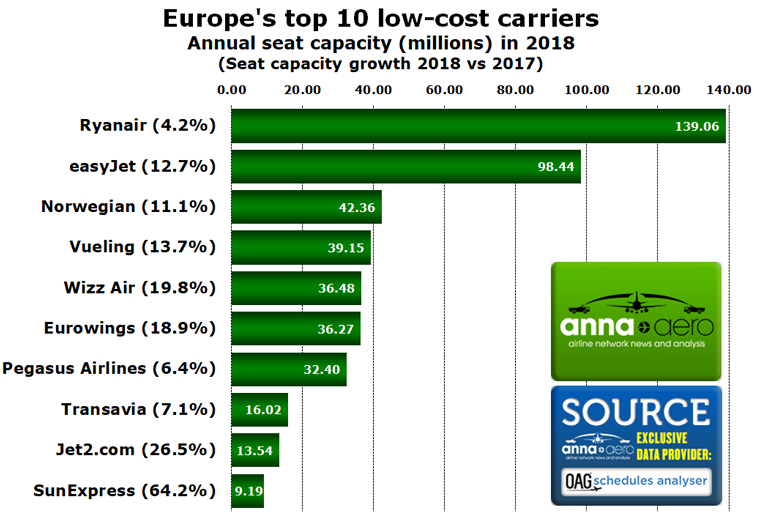 One airline which has made strong inroads into Europe’s top 10 is SunExpress (excluding SunExpress Germany capacity), with it reporting a rise in seat capacity this year of over 64% to 9.19 million seats, a result of it adding 3.60 million seats in 2018. The result of SunExpress’ rapid expansion means that Spanish LCC Volotea falls short of the top 10 ranking, with it placing in 11th with 7.09 million seats in 2018, a 26% increase versus 2017, a year when it offered 5.63 million seats. Other LCCs outside of the top 12 showing robust growth in 2018 include Pobeda (13th largest LCC in Europe; 29% growth in 2018), WOW air (17th, 23%), SunExpress Germany (18th; 22%), flydubai (19th; 46%) and Air Arabia Maroc (20th; 15%). While the leading carriers command a 70% market share of LCC seats, a few low-cost airlines have also entered the European market in 2018, including SalamAir which now serves Baku and Tbilisi from Muscat.

Nine markets where LCCs account for over 50% of seats

While anna.aero has forecast that the LCC market will account for 50% of seats by 2027, this is a target which has already been reached in nine European country markets. The leading nation for low-cost market share in Europe is Macedonia, with LCCs accounting for just under 66% of the market in 2018. What is interesting to note however is that although Macedonia is Europe’s leading low-cost market when it comes to market share, the continent’s leading LCC, Ryanair, is not present in the market. Along with Macedonia, Gibraltar and Iceland (highlighted in light green) are also in the top 20, but are yet to see the Irish LCC’s tailfin grace its airports’ aprons. 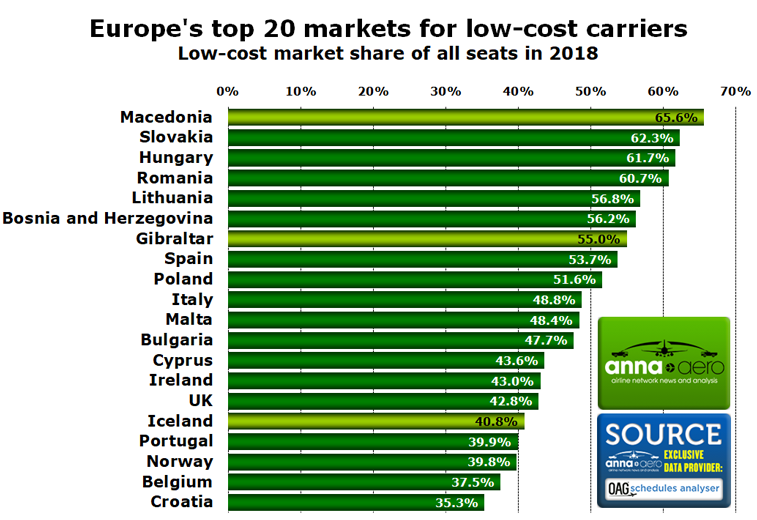 In terms of LCC seats, the biggest market in Europe is Spain, with it home to 82.2 million departing seats in 2018, with the UK second (75.21 million) and Germany third (55.68 million). Spain will see its low-cost seat capacity grow by around 5.3% in 2018, while Germany will see a mighty 19% rise. However, the UK is currently reporting just a 0.3% (191,000 extra departing LCC seats) rise in capacity for 2018. It should be noted though that OAG classed Monarch Airlines (collapsed in October 2017) as a low-cost operator, resulting in a loss of over 6.14 million scheduled seats. The growth of Germany has allowed it to overtake Italy, the third biggest market in 2017, with the former seeing 400,000 more departing LCC seats in 2018 than the latter. Italy itself will see LCC capacity rise by around 6.4% this year.

Could Ryanair help market stimulation on the bottom line?

The country in Europe with the lowest market penetration for LCCs is Belarus, with the low-cost market accounting for just 0.7% of seats from the nation in 2018. This figure is made up of just Vueling and its twice-weekly summer seasonal service from Barcelona to Minsk. However, it is well documented that many Belorussians cross borders to take low-cost flights from Vilnius, Warsaw and Kiev. With a population of over 9.5 million people, of which 70% live in urban areas, it is a market with demographic potential, especially when you consider that Lithuania has a population of 2.8 million but LCCs have 57% market share. As a result, Lithuania’s airports processed just under 5.25 million passengers in 2017. In comparison, Minsk Airport processed just over 4.11 million passengers in 2017, while Belorussian regional airports accounted for less than 100,000 passengers last year according to various sources. Last year traffic from Minsk grew by 20%, and 23% between 2015 and 2016. So the market is certainly showing that Belorussians are wanting to travel. 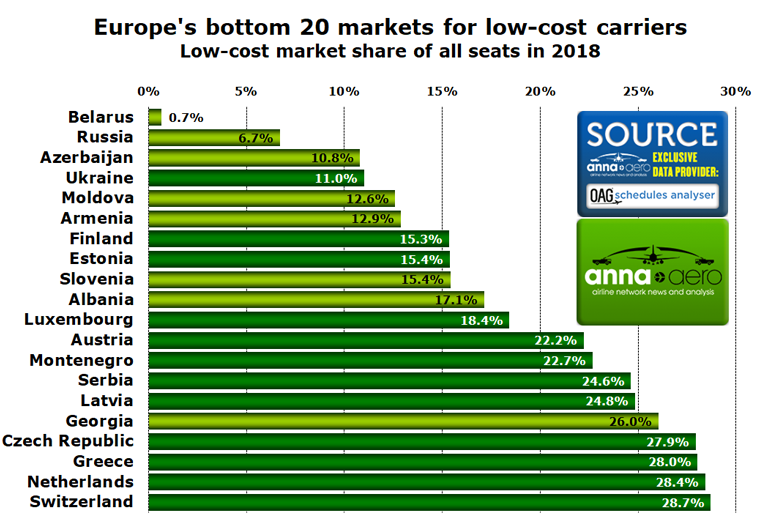 Following Belarus, Russia, Azerbaijan and Ukraine top the leading nations in Europe with the lowest low-cost market penetration. Again, like the graph above, nations highlighted in light green presently do not have scheduled operations from Ryanair. It should be noted that while Ryanair is not yet serving Ukraine, it plans to do so from the end of S18. 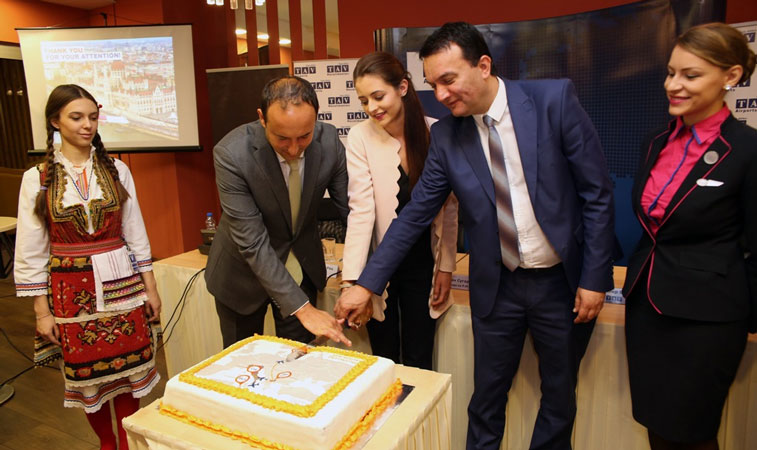 Wizz Air expanded operations from Skopje last year by adding a fourth based aircraft in the Macedonian capital. The event was celebrated with cake, with the cutting being carried out by: Alper Ersoy, GM TAV Macedonia; Sorina Ratz, Acting Head of Corporate Communications, Wizz Air; and Goran Sugareski, Macedonian Minister of Transport and Communications. Macedonia is the leading country market in Europe for LCC penetration, with the business model having a 66% share of all seats this year. However, the nation is still not on Ryanair’s route map.