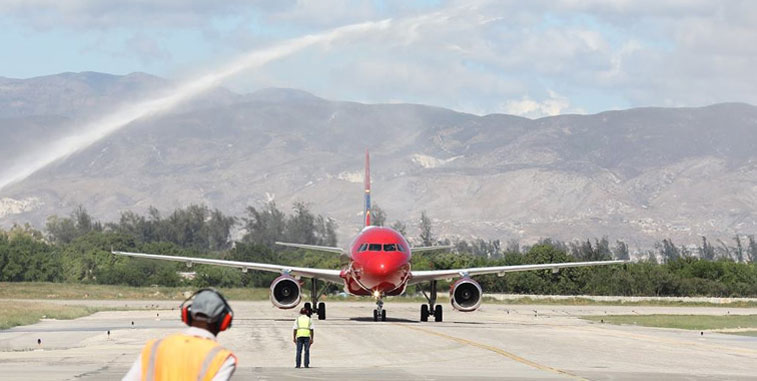 JetBlue Airways launched flights between Orlando and Port-au-Prince in December, with the first flight getting a water arch salute on arrival. This was one of two routes to be added by JetBlue from Orlando during the past 12 months, with a daily service to Atlanta having begun in March. In total JetBlue serves a 31-destination network from Orlando, with the last routes to be dropped from the airport being in 2012. However, while its network has grown and the number of passengers flown has increased year-on-year, the carrier has steadily been losing market share at Orlando.

JetBlue Airways in 2017 transported 13% of domestic passengers from Orlando, while it had a 11% share of international travellers according to data published by the Floridan airport. This means that the airline is the fourth largest domestic operator from the airport after Southwest Airlines (28%), Delta Air Lines (16%) and American Airlines (14%). In the overseas market it is third after Virgin Atlantic Airways (14%) and Air Canada (12%), meaning that JetBlue is the largest US carrier on the international stage at Orlando, transporting 644,867 revenue non-domestic passengers in 2017. This translates to roughly 12% of the airline’s passengers from the Florida airport last year flying on an international sector.

Sustainable growth over the past decade

Between 2008 and 2017, JetBlue’s annual traffic throughput has grown by 69%, going from 3.26 million in 2008 to 5.49 million passengers in 2017, when referencing data obtained from the Bureau of Transportation Statistics (BTS). Last year saw traffic climb by 1.3%, the lowest year-on-year increase recorded during the period analysed. The best result came in 2011, with traffic up by nearly 13% on 2010. 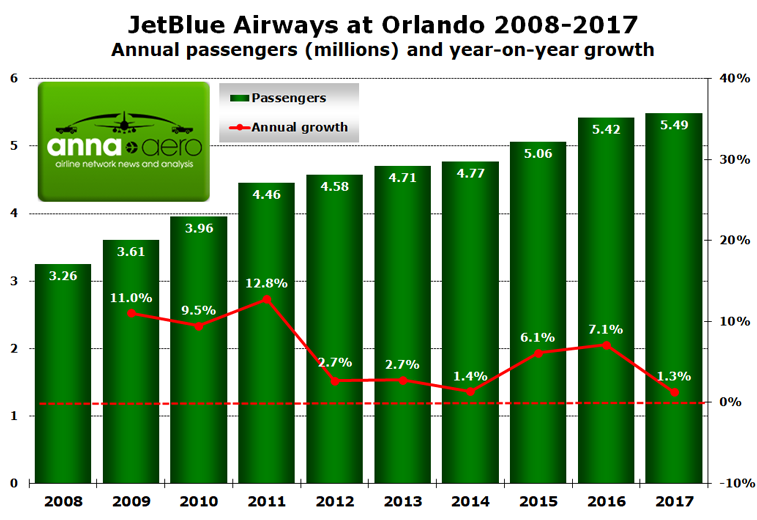 While JetBlue has managed to grow its traffic figures year-on-year from Orlando, the carrier has steadily been losing market share of the low-cost market at the airport. After Las Vegas, Denver and Fort Lauderdale, Orlando is the US’ fourth largest airport when it comes to LCC seat availability, with 15.04 million departing low-cost seats available in 2018. Of these seats, JetBlue in 2018 has just under a 23% market share, a number which has fallen from 28% in 2014. 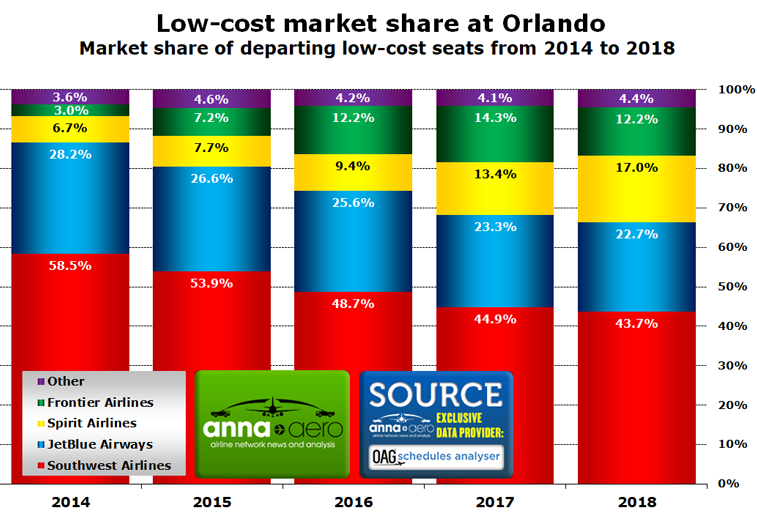 During the same period, Spirit Airlines has increased its market share of LCC seats from Orlando from 6.7% in 2014 to 17% in 2018, while Frontier Airlines’ share has grown from 3.0% to 12%. Southwest Airlines, Orlando’s largest LCC operator, like JetBlue, has also seen its market share fall as more carriers muscle in on the market, with its share going from just under 59% of LCC seats in 2014 to 44% this year. It should be noted, that these numbers can alter slightly as winter schedules are updated.

Network grows above 30 destinations, however weekly departures down

Two new routes have been added to Orlando schedules during the past year, with those being a link to Port-au-Prince in Haiti (launched 14 December) and Atlanta (8 March). No destinations have been dropped from Orlando since 2012 when referencing OAG schedules. All routes from Orlando are flown with at least one daily service this summer, however the number of weekly departures operated by the carrier from the hub have fallen 4.4%, with the airline offering 438 departures during a sample weekly of S18 versus 458 during the same week in S17. These cuts have been seen on some of the airline’s top routes from Orlando, with three of the top 10 services (highlighted in light green) seeing cutbacks. 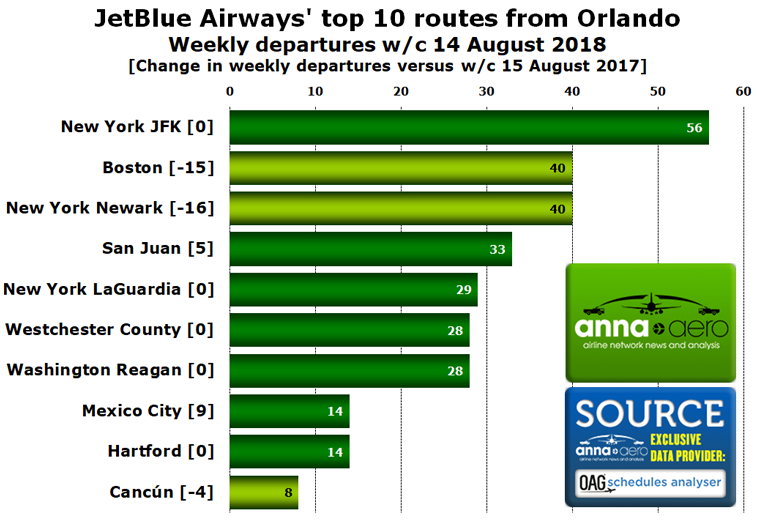 Of the 31 destinations flown to by JetBlue from Orlando this year, 15 are based in the Northeast US. These 15 destinations account for 291 weekly departures this summer, representing 66% of all weekly departures in S18. However as a result of the airline’s cutbacks on some services, particularly Boston and New York Newark, this share of departures has fallen from 73% which was recorded for the 15 routes in S17 when referencing OAG schedules. While there is a fall in weekly departures this summer, it should be noted that overall for the calendar year, JetBlue is reporting a 2.8% rise in annual departing seat capacity from Orlando in 2018 versus its offering in 2017.

No dropped routes since 2012

While some services have seen reductions in weekly frequency, JetBlue has not dropped a route from Orlando since 2012, a year when flights to Portland in Maine, Burlington in Vermont and Washington Dulles ended. Between 2012 and S18 however, the carrier has added nine destinations to its Orlando route map. Currently the airline has not announced any new destinations for the upcoming winter or next summer, however it currently shows that all routes will continue to fly in 2019. 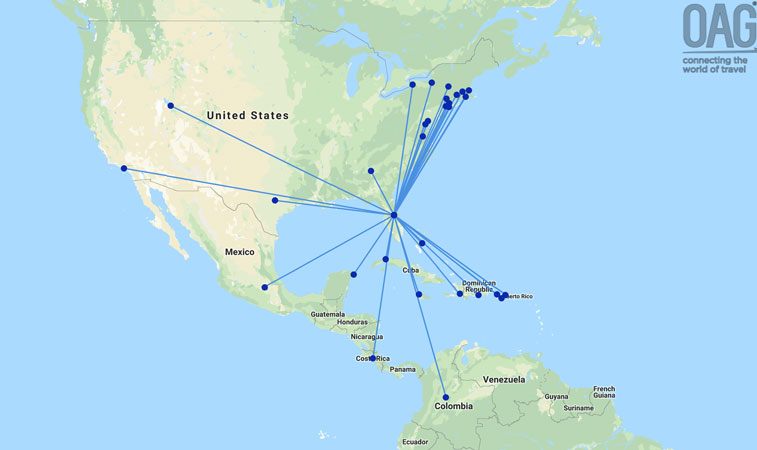 JetBlue Airways’ Orlando route map shows how important the Northeast US market is to the carrier. Of the 31 destinations that JetBlue flies to from the Floridian city, 15 are within this part of the US, accounting for 66% of weekly departures in S18. However due to cutbacks, this share of departures has fallen from 73% in S17.